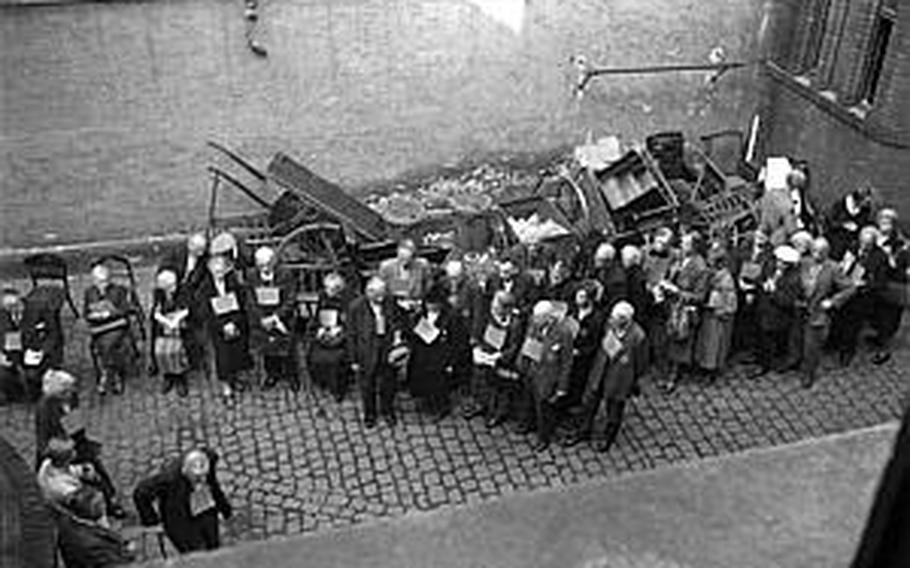 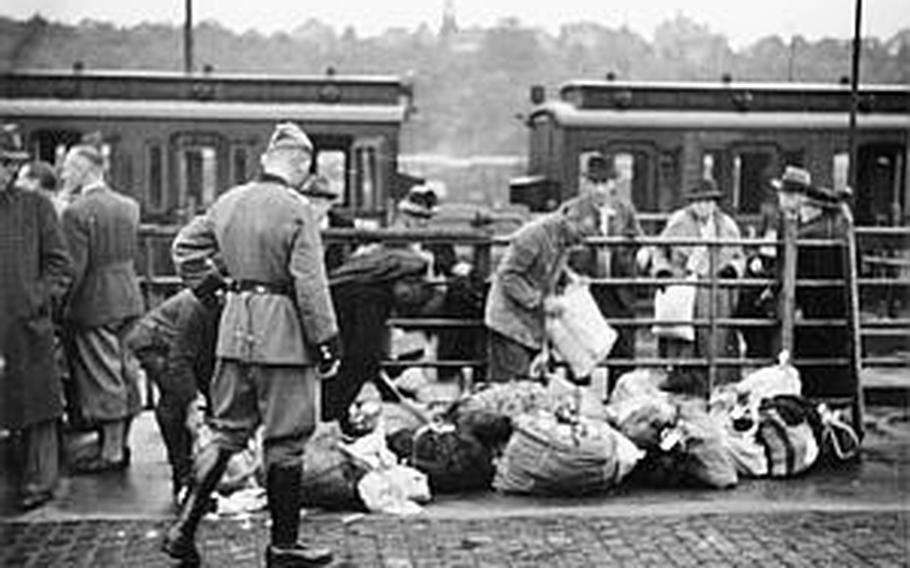 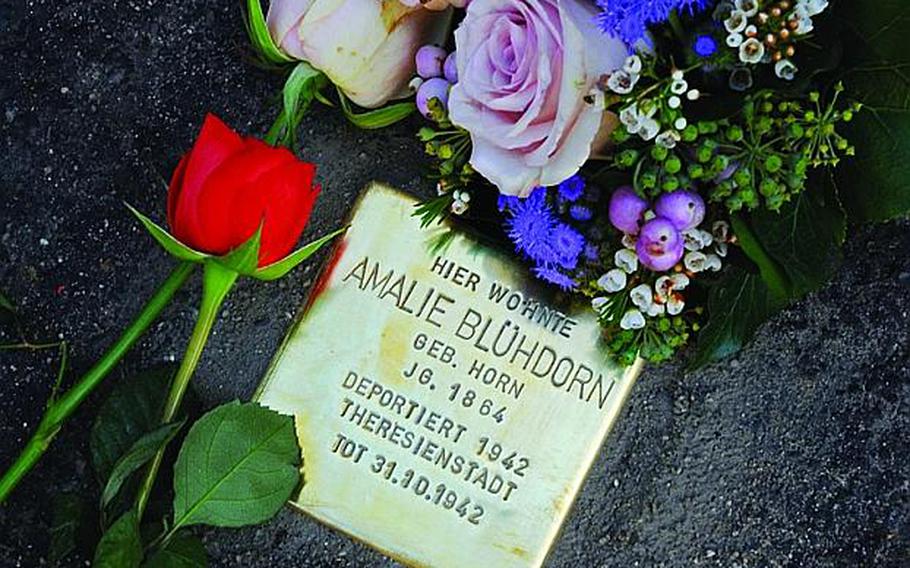 This is the story of Amalie Bl&uuml;hdorn, a German Jew, and the efforts to make sure she is never forgotten.

Amalie was born in 1864 in Dortmund, Germany. At age 21 she married a well-known businessman in Cologne, and they and their two children lived in a comfortable home with a governess and maids.

When Amalie was 57, her husband died suddenly of a stroke. She and her son took over the family clothing business, continuing to operate it successfully. Until 1933.

That was the year that Adolf Hitler, the newly appointed chancellor, issued a prohibition against Germans frequenting Jewish businesses and professionals. It was one of the first in a series of events designed to eliminate Jewish society and culture from Nazi Germany. The Bl&uuml;hdorn business became one of its victims. Forced to liquidate it, Amalie and her family moved to Wiesbaden.

From then on, her life, like those of millions of other Jews, would steadily change for the worse.

Amalie is not a relative of mine. And I am not Jewish. But what we do have in common is that we both have lived in the same building on Niederwaldstrasse in Wiesbaden. And while her name isn&rsquo;t written next to a doorbell as mine is, you can find it engraved on a square bronze-covered stone in the sidewalk in front of the door.

Amalie died in a concentration camp and is one of the thousands of victims of the Nazi terror regime memorialized in the Stolpersteine Project (Stolperstein means &ldquo;pavement stone&rdquo;). Since the first of these memory stones was laid in a Berlin sidewalk in 1997, its creator, Cologne artist Gunter Demnig, now with an assistant, has engraved thousands by hand. They are placed in front of the addresses at which the victims last lived.

His motto is &ldquo;A person is only forgotten when his name is forgotten,&rdquo; a belief he extends not only to Jews but also other victims of the Nazi regime: homosexuals, euthanasia subjects, resistance fighters and members of persecuted religious and ethnic groups.

Today there are more than 22,000 names remembered in memory stones in 500 German towns as well as in Austria, Hungary, the Netherlands, Czech Republic and Poland. Inscribed on each are the skeletal details of a life: name, date of birth, date of arrest or deportation and date of death or murder.

In Wiesbaden, where Amalie spent her last years, 392 memory stones lie in 167 areas. Dem nig has authorized the Aktives Museum Spielgasse f&uuml;r Deutsch-J&uuml;dische Geschichte, a museum for German-Jewish history, to manage the project there. The city supports the project and provides the workers who actually lay the stones.

Anyone of any faith can act as a patron for a memory stone, which costs 105 euros.

&ldquo;I don&rsquo;t think most patrons even have a Jewish background,&rdquo; says Elisabeth Lutz-Kopp, director of the museum. &ldquo;Very often patrons want to memorialize a person who lived in a certain house or were in the same profession, such as a teacher. Others may have known of a Jewish family that had lived in the neighborhood and want to find out their fate and sponsor them.&rdquo;

When a person is selected, she said, a member of the museum researches him or her from documents and photos with data supplied from various sources. This includes the city archives, which has a database with the names of all deported and murdered Jews in Wiesbaden, as well as their addresses and professions. For some, there is no data on their fate.

&ldquo;In that case,&rdquo; said Lutz-Kopp, &ldquo;the death date is fictional or based on departing trains where we know no one survived.&rdquo;

The researcher then writes a biography. During a small ceremony in front of the home in which the memory stone is laid, the biography is read aloud and flowers are placed on the site.

It was my neighbor in the Niederwaldstrasse house, Angelika Thomas-Semm, who sponsored Amalie&rsquo;s memory stone. What impressed her about the project was that passers-by had to bend over to read the stones, a bow that invoked an act of reverence to the dead. She also saw that Amalie had been taken from Niederwaldstrasse on Aug. 22, 1942, and deported a few days later. Thomas-Semm was born Aug. 22, 1952. The coincidence of the two dates made her realize &ldquo;I must do this.&rdquo;

And so it was, 68 years after her death that I found myself with a small group standing in front of our house on Niederwaldstrasse during a ceremony to pay our respects to Amalie. The stone has returned her name to the last real home she knew.

And Amalie Bl&uuml;hdorn&rsquo;s life has not been forgotten.

The life of Amalie Bl&uuml;hdornAmalie (Horn) Bl&uuml;hdorn was born Oct. 31, 1864. She married Leopold Bl&uuml;hdorn, a clothing and accessories business owner in Cologne. They had two children, K&auml;te and Eugen, and a good life. She loved art and collecting porcelain.In 1921, Amalie suddenly found herself widowed. But she continued to run the family business with Eugen until 1933, when a Nazi prohibition against doing business with Jews forced them to sell the business and stock and move to Wiesbaden. There the Nazis demanded that she, along with other Jews, give up all valuables and jewelry. Amalie resisted. She told her daughter that she wouldn&rsquo;t even think of separating herself from her possessions and that no one could force her. In 1939, K&auml;te emigrated to America. Amalie and Eugen remained behind.Life for Amalie became increasingly difficult, according to a neighbor. She suffered both physically and mentally. She was always unbearably cold because she wasn&rsquo;t allowed any coal and little food. In May 1942, hearing that he would be deported, an already emotionally wrought Eugen committed suicide with his mother present.Months later, her family gone, Amalie was on a train to the Theresienstadt concentration camp as one of more than 1,500 Jews who would be deported in three groups from the city.There she wouldn&rsquo;t live for long. On Oct. 31, 1942, 78 years to the day she was born, Amalie Bl&uuml;hdorn died at the camp.&mdash; Translated from a German biography by Jayne Traendly