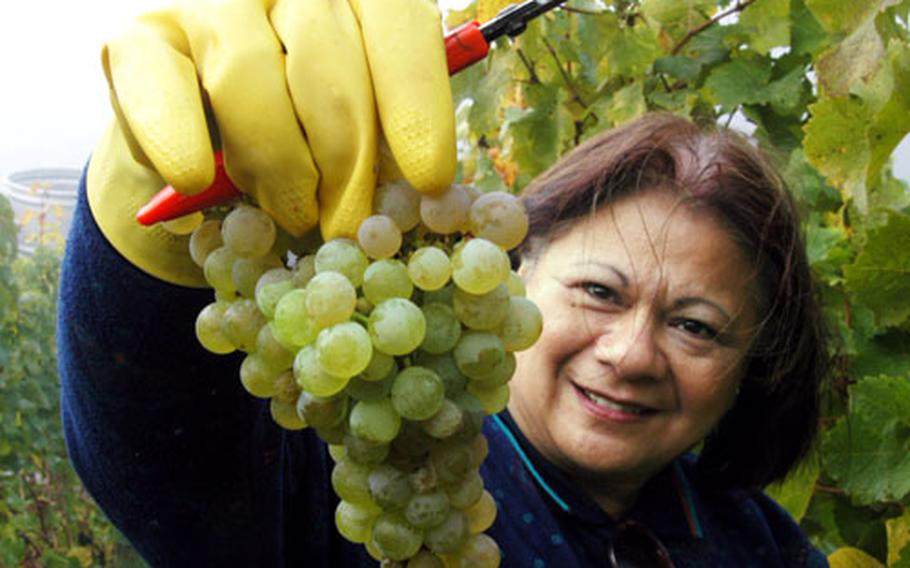 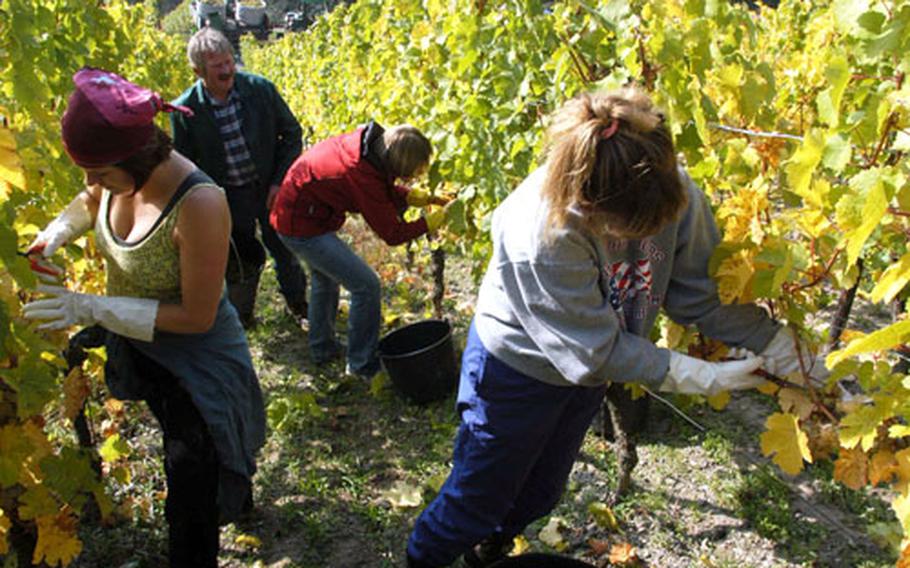 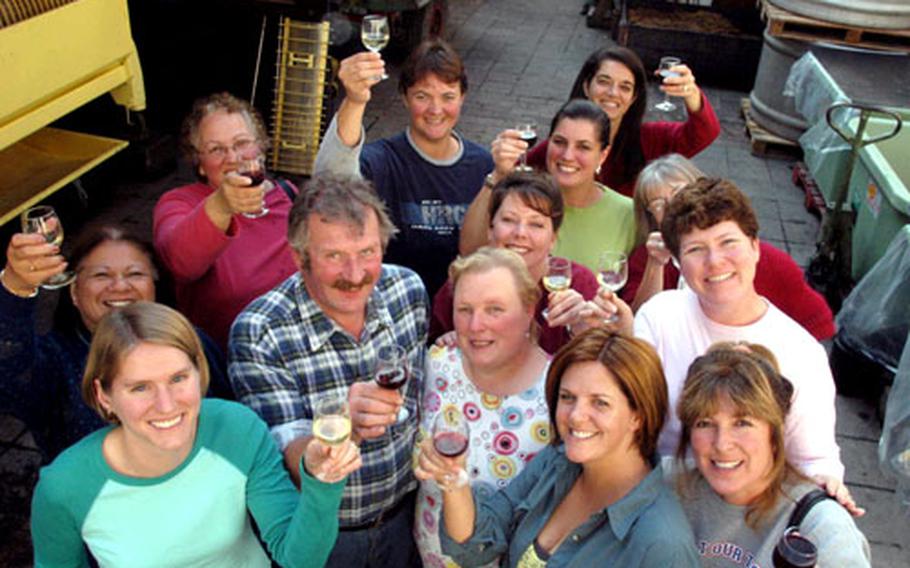 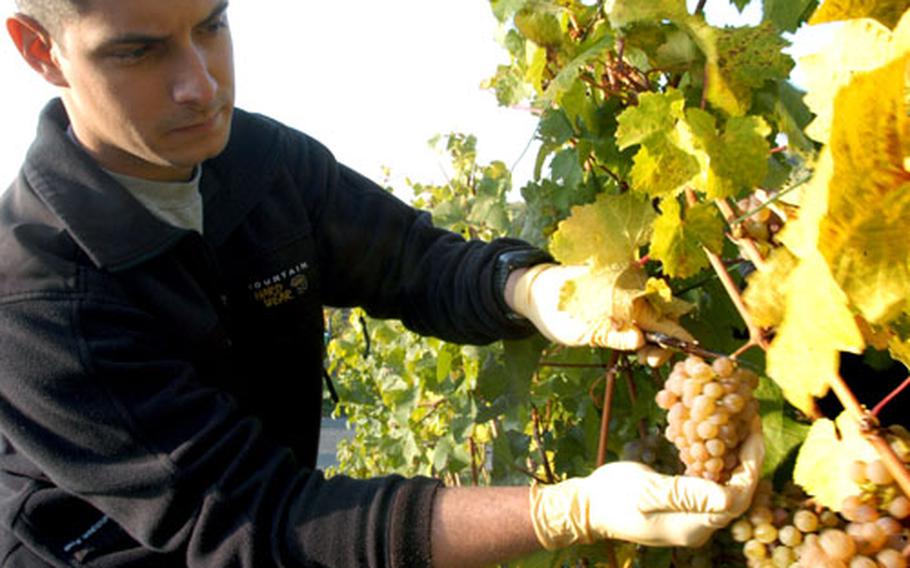 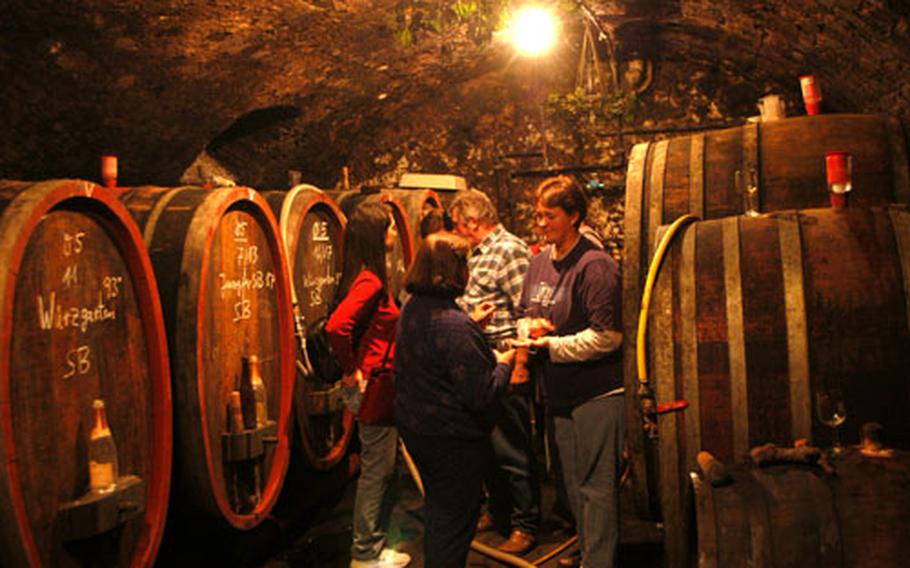 &#8220;Look at this beauty,&#8221; Lu Yanik says as she proudly raises into the air a perfect Riesling grape that she has just cut off a vine.

Watching her, Ginger, a 3-year-old Portuguese water dog, agrees while twisting his tail. He loves to eat the ripe and sweet just-picked grapes.

Yanik was part of a group of American women and one Englishwoman who helped gather grapes in the hills of Hallgarten about 10 miles west of Wiesbaden, Germany. Ginger accompanied them as they worked.

The women were members of the Wiesbaden Community Spouses Club.

They were one of two groups that responded to German vintner Helmut Rappenecker&#8217;s invitation to help with the annual harvest in mid-October.

The other was the 1st Air Operations Support Squadron from the Wiesbaden Army Airfield, which showed up the following day.

As they worked, Rappenecker, a friendly, talkative man with a passion for fine wines and winemaking, regaled the workers with stories in English of his profession. On these two sunny, golden October days, the work and the company were both a pleasure.

Both groups worked the same way. Equipped with clippers, plastic buckets and gloves, they started at the bottom of the steep slopes of the H&#228;ndelberg, northeast of Hallgarten, a small village surrounded by vineyards, and worked their way upward through rows of Riesling grapes.

They were joined by Rappenecker and Polish helpers, who showed them the proper way to remove the grapes from the vine and transport them to the wagon that will get them to the winery.

First, the wine leaves are ripped off around the grapes to reveal the fruit.

Then using the clippers, the grapes are removed and thrown into the bucket. When full, the buckets are emptied into bigger containers on the backs of two Polish helpers. They take the load down and throw the grapes into large tubs on top of a wagon.

Jacek Marianowski and Rafal Jakobowski handled the tough task of getting the grapes into the barrels. It was not an easy job climbing down the hillside with its 35-degree angle and a 100-pound load on their backs.

Slowly, the American pickers worked their way to the top of the H&#228;ndelberg. Jokes and laughter made the rounds, keeping the atmosphere relaxed and friendly.

Rappenecker owns the Eberbacher Hof in Hallgarten, a winery that dates back to the 17th century. He told the workers the Riesling grapes are only 25 years old, but the H&#228;ndelberg as a grape-growing area dates to 1539.

After four hours, the first group finished its rows of grapes and reached the top of the hill. They were greeted by Rappenecker with a cheer and a glass of fruity Riesling wine, which originated from the very same location they had just been picking.

Later, as a reward for their efforts, the diligent Americans are invited for lunch in the tavern of the winery in Hallgarten. Rappenecker&#8217;s wife, Erika, a round, friendly woman, greets the hungry with a noodle soup, pork roast with potatoes and red cabbage and their own bottle of wine to take home as a thank you.

Rappenecker uncorks a battery of white Riesling and red Sp&#228;tburgunder wines. He explains his wines with authority and wit. He mentions the different grades and attributes, the whole spectrum of his wines. He shows his love of wine making.

He finishes with: &#8220;Now enough words have been said. Enjoy the golden color, smell the fine bouquet, sample the fine crisp taste of the Riesling grape and the full round strength of the red Sp&#228;tburgunder wine.