Why ‘The Post’ is the dark horse of best picture contenders 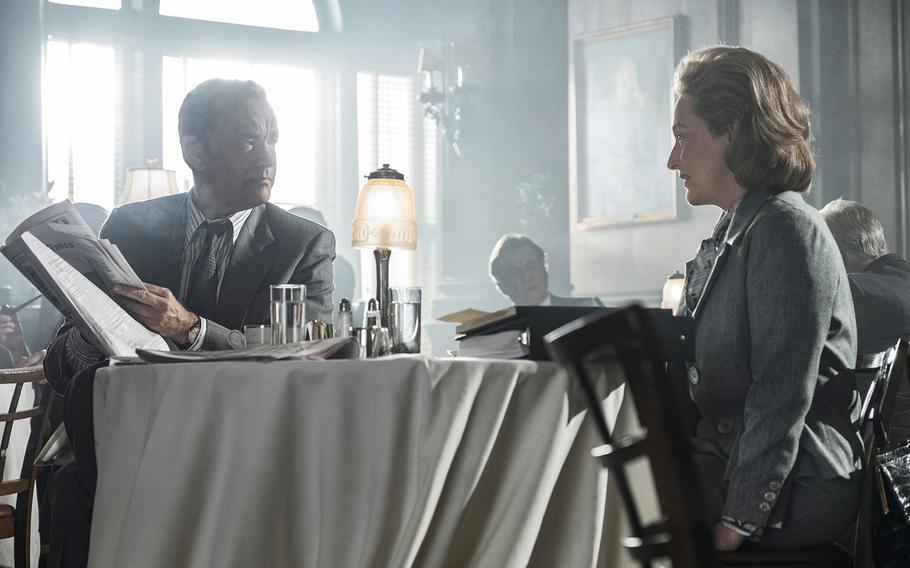 In the array of Academy Award nominees for best picture this year, “The Post” is chock full of Oscar ingredients: a Steven Spielberg film starring Tom Hanks and Meryl Streep that harkens back to a storied time in our ever-evolving democracy.

And yet, as host Seth Meyers joked at the Golden Globes — as a woman arrived prematurely on-stage with an armful of trophies for the powerhouse trio — even with all that, “We have to wait and see what happens.”

As a journalist, I love the themes in this film about journalistic integrity exposing grandiose lies told to an unknowing and trusting public by those in power. I loved the way it distilled the unwavering mission of a good newspaper to reveal and carry the truth that nobody wants to shoulder, even at its own peril.

But in this divisive era of a White House in the crosshairs of an investigation into foreign intervention in U.S. Democracy while the press is distrusted as politically-driven “fake news,” I believe “The Post” is a mere dark horse in the Oscar race. I don’t think the country is in the mood for a film about a righteous fourth estate prevailing over the lies of the government at a time of perilous conflict. It cuts too close to the bone.

In the context of history, “The Post” brilliantly begins with the original government lie — that U.S. forces are winning in the Vietnam War. Onscreen, disillusioned government analyst Daniel Ellsberg, who sees his firsthand reports of pummeled and bloodied troops and war crimes on all sides turned into tales of victory in the spin, ultimately leaks the truth in the form of the Pentagon Papers to the New York Times.

The story takes off when the government gets a restraining order temporarily barring the Times from publishing any more the documents. The Post, under editor Ben Bradlee (Tom Hanks) sees its moment and sets out to get its hands on the documents and carry the story forward.

For Post owner Katharine Graham (Meryl Streep), who had taken over the newspaper after her husband’s suicide a few years earlier, this moment suddenly cast her into a life-altering decision of whether to risk prison and possibly an end to the newspaper by running the Papers.

“If we don’t hold them accountable, who will?” Bradlee says to her.

“We can’t hold them accountable if we don’t have a newspaper,” Graham responds.

At that moment, Graham’s emergence as the fierce, independent leader of one of the nation’s pre-eminent and powerful newspapers was not a fait accompli. She was a socialite whose entire world was wrapped up in the very people the newspaper would be exposing. Secretary of Defense Robert MacNamara was a close, personal friend.

But she did become one of the great American women of the 20th century after she finally chose to step into the fray in the name of truth over power. And the Supreme Court ultimately ruled that the Times — and by extension the Post — were within their rights to publish the Pentagon Papers.

For more than four decades, this was seen as a victory for freedom of speech and for the public’s right to know. But in the past two years, the very understanding of this history is coming into question.

If it happened today, would the results be the same? Would the courts and the public reaction be the same?

In this era of “fake news” and a vilified press, where “truth” to public is as divisive and selective as which movie to watch, I am not sure I know the answer. And I am not sure it’s a theme the country is in the mood to celebrate — however good the film is.