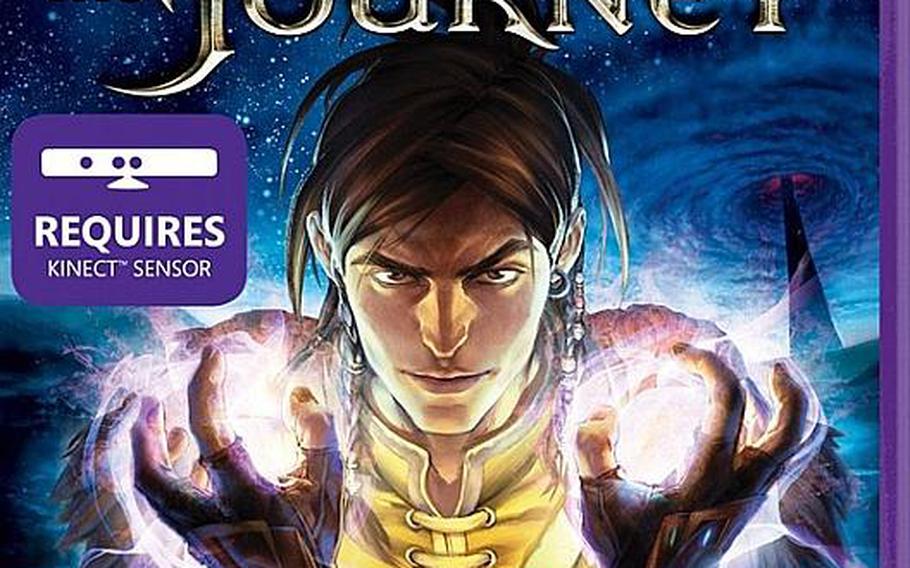 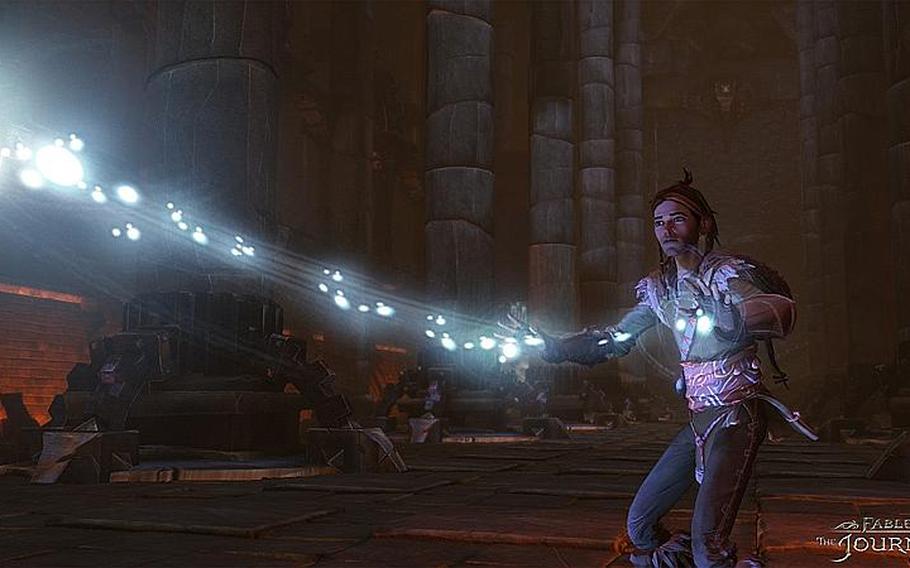 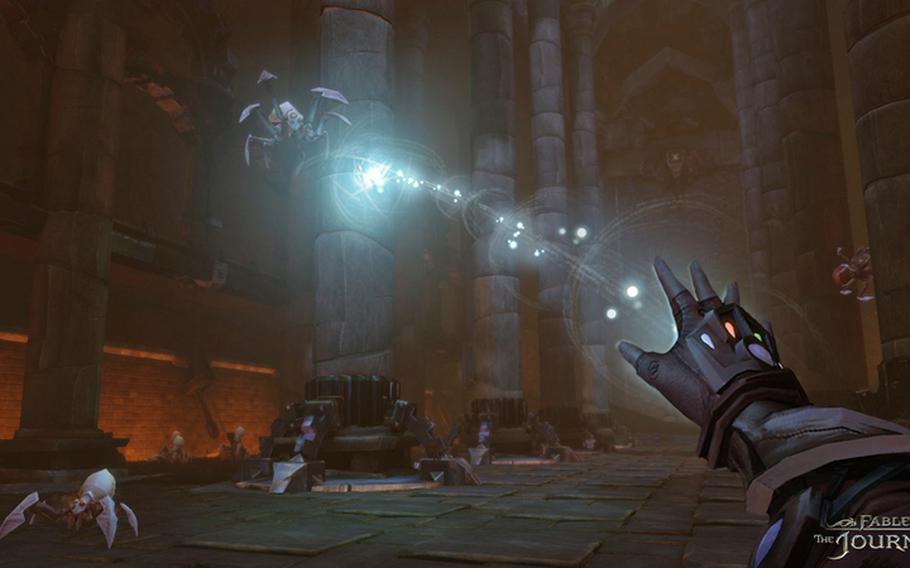 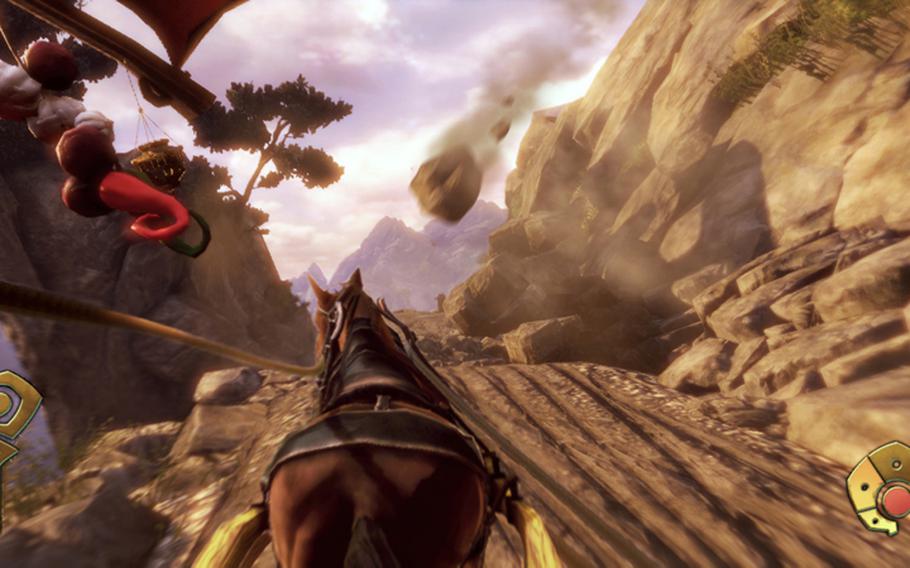 Microsoft has thrown down the gauntlet in a magical duel with Sony.

In “Fable: The Journey,” you play as a young hero with a pair of gauntlets that can fire bolts of energy, fireballs and more. The game — developed by Lionhead Studios for Microsoft Games — uses the Xbox’s Kinect to capture your arm motions and translate them into on-screen action.

The game’s direct competitor — aside from a handful of unremarkable Wii titles — is “Sorcery,” a recent title that uses the Move motion-control system for the PlayStation 3. The Move’s light-tipped controller simulates a magic wand, allowing you to use arm motions and press buttons to select spells and actions. And the system’s navigation controller is used to move around in the environment.

Both games seem to be aimed at younger audiences, offering somewhat cartoony characters, low-intensity combat and a teen rating. Since both offer interesting stories and characters, the big differences fall in the control systems. Personally, I side with the wider array of options offered by the Move in “Sorcery.” While “Fable” is generally enjoyable, it ends up running into complications caused by the Kinect’s limitations.

The story of “Fable: The Journey” picks up about 50 years after the world of Albion was saved from an assault by a dark force, the story told in “Fable III.” You play as Gabriel, a young man who’s separated from his traveling caravan and left with nothing but his cart and his beloved horse. After he rescues the mysterious seer Theresa — a friend from previous “Fable” titles — he’s propelled on a course that will make him a magic-wielding hero capable of saving Albion from its latest threat.

Unlike previous games in the franchise, “The Journey” is a linear adventure on a predetermined path rather than a free-roaming role-playing game. Your lack of movement options is directly related to the Kinect’s “you are the controller” philosophy. Without a joystick — like that available in the Move’s navigation controller — it’s almost impossible to let a character do anything other than run on a rail.

While the story is very deep and interesting, it frequently moves at a horse-and-buggy pace as you guide your cart along the roads of Albion. Even ambushes by goblinlike Hobbes and attacks by the encroaching dark force do little to break the monotony of these trips.

However, things can get quite interesting when you leave the cart to do some exploring. Expect some puzzle-solving as well as a lot of fighting.

Initially, combat involves flicking one hand forward to launch an energy bolt and the other to push or grab an enemy. You can also raise your forearm to ward off an attack or lean to one side to evade an attack. I was very pleased to find that the motions and attacks were very well coordinated — at least at the start.

Unfortunately, if you get up from your sofa for a break, you need to sit precisely where you did before or your attacks will go astray. And even if you are careful to sit in the same spot, the calibration seems to degrade over time. I couldn’t find anything that would allow you to recalibrate the tracking in-game, which is an irritating problem. This is a shame because the game has an excellent calibration exercise at the start. It would be ideal if you could reopen it to fix your settings later in the game. As it was, I ended up repositioning the Kinect sensor to get it to read properly again. I’m told that things work much better if you can place your Kinect sensor above the TV, but that’s wasn’t an option for me.

As the game progresses, your abilities increase. For example, you learn to hurl fireballs. This is accomplished by raising your hand and shaking it side to side or by uttering the word “fireball.” Unfortunately, it seems to take a lot of shaking to get the fireball to activate, so it isn’t particularly useful in a large-scale attack. The Kinect also fails to pick up my voice much of the time, so activating it by voice isn’t much of an option either.

When things are properly calibrated, it’s a lot of fun to combine spells, such as stunning a foe with a push and then nailing him with an energy bolt. These combined attacks and rapid-fire spell-casting are the keys to victory when facing a boss. However, if your calibration is off, expect to die.

As a result of the control issues, the winner of the magical, motion-control duel has to be “Sorcery.”

Bottom line: While much of the game is fun and the story is solid, control issues can be extremely frustrating when the Kinect calibration slips.