Weinheim: Get ready to bare all in German co-ed sauna 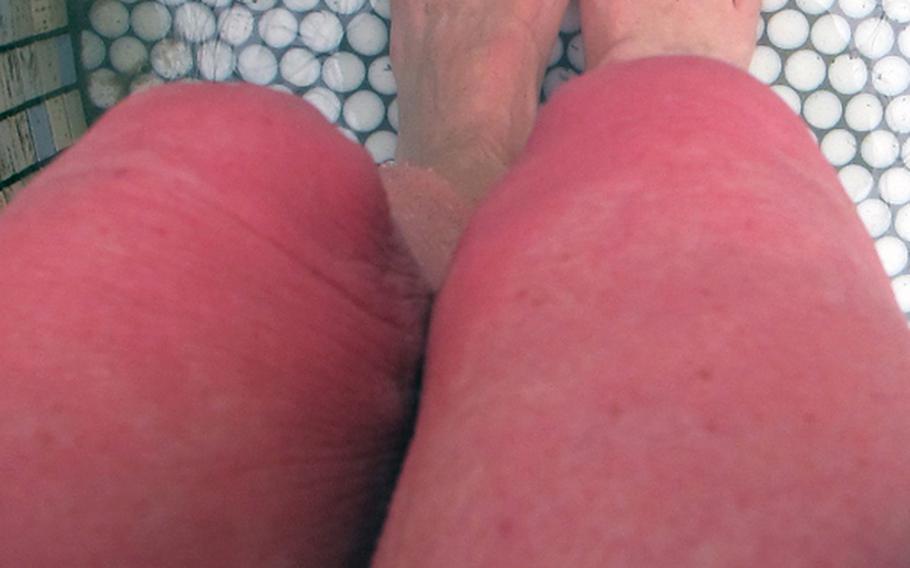 My knees after a stint in the sauna, followed by immersion in the freezing lake. It looked bad, but it felt good. (Nancy Montgomery/Stars and Stripes)

My knees after a stint in the sauna, followed by immersion in the freezing lake. It looked bad, but it felt good. (Nancy Montgomery/Stars and Stripes) 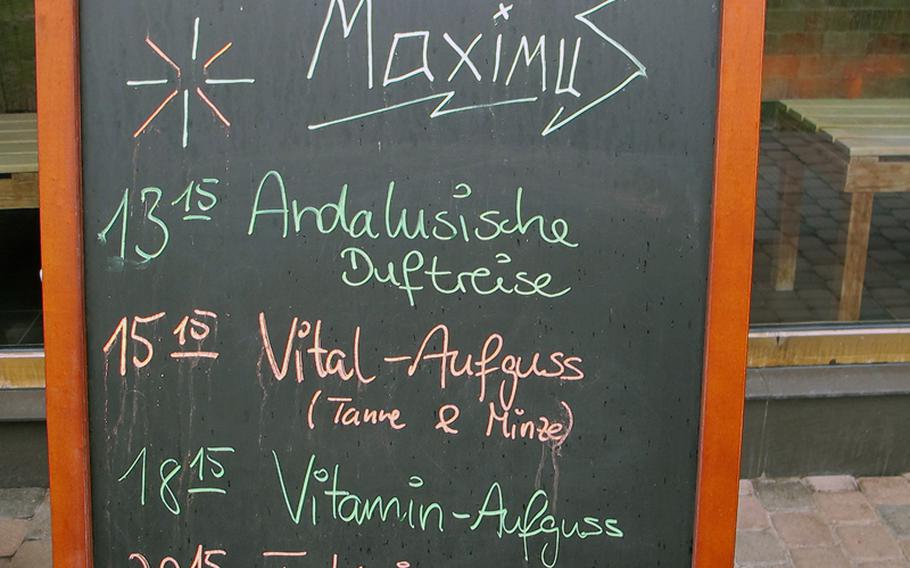 A sign outside a sauna notes the scheduled times for a variety of infusions, when "bath masters" pour potions on the rocks. (Nancy Montgomery/Stars and Stripes) 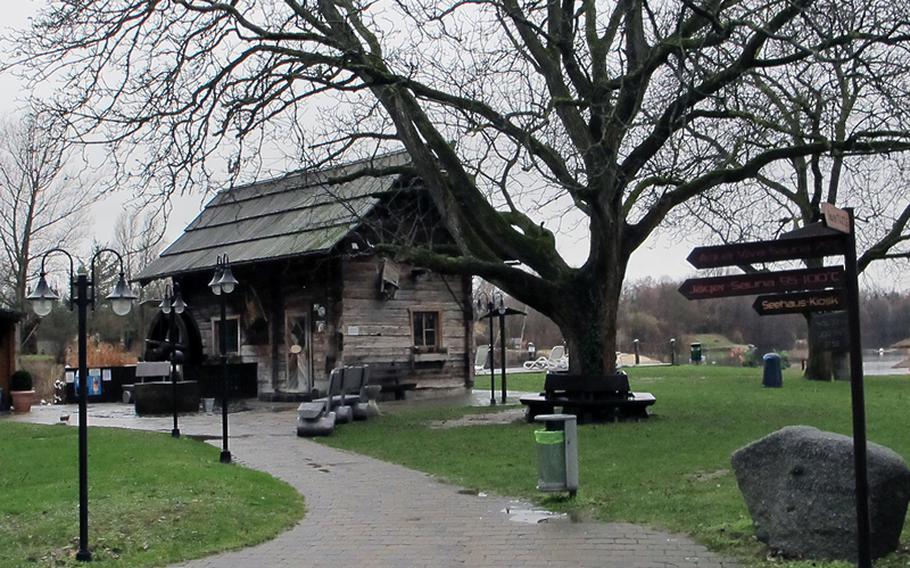 All roads lead to saunas. Some are tiny, like an Alpine hut. Others are modern, capable of holding scores of people. All are hot. (Nancy Montgomery/Stars and Stripes) 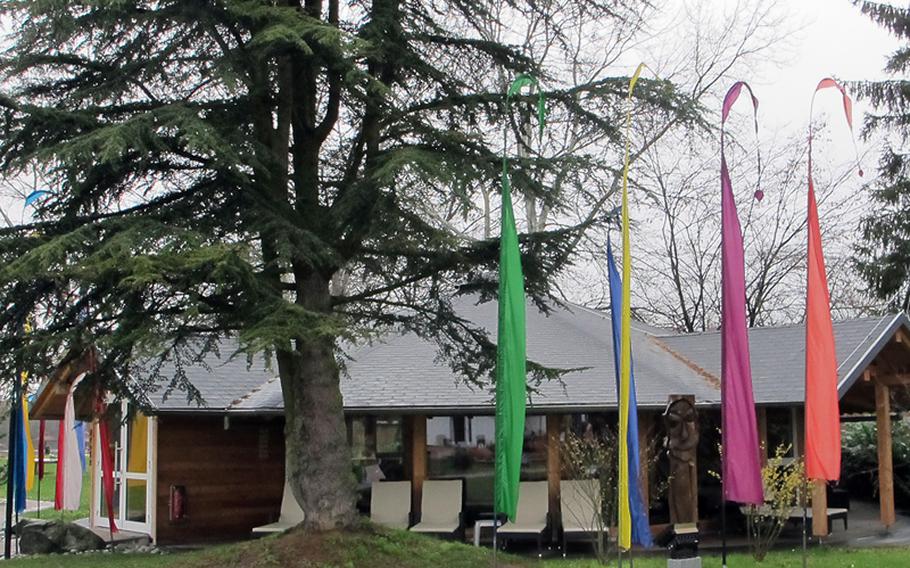 One of the larger saunas in the outside complex at Sauna Paradies in Weinheim, Germany. (Nancy Montgomery/Stars and Stripes)

When in Rome, do as the Romans do, they say.

But what about when in Germany?

What if what the Germans are doing is visiting a sauna, and everybody’s naked?

Sweating with naked strangers of both sexes is a foreign idea for most Americans, many of whom believe that nudity, if practiced at all, is best practiced at home, perhaps with a loved one.

Germans, on the other hand, “love to be naked” and will “strip off just about any place and anytime,” according to the German news magazine Der Spiegel.

“And then there’s the sauna. Forget about trying to wear a swimsuit in a sauna,” the magazine said.

In Germany, damp, drizzly days can arrive one after the other after a long winter of cold and darkness. A trip to the Sauna Paradies in Weinheim, where heated pools, heated stones, heated floors and numerous saunas, both indoors and out, seemed like a chance to get all rosy and warm. Sauna Paradies is a part of the Miramar water park about 25 minutes from Heidelberg.

I paid 18.70 euros for four hours, put my entry card into the slot, and went through the turnstyle.

Beyond the never-ending shock of seeing grown men and women walking around nude, I am challenged by not knowing how, exactly, to proceed.

Where does one disrobe?

How does one properly sit in a sauna?

What is an infusion?

And why is that guy smiling at me?

My best advice is to discreetly watch how others do it. Or just consign yourself to seeming like an overgrown toddler whom everyone knows needs help.

But a few tips:

● Bring a big towel because your feet and the rest of your body are all supposed to be on it when you sit or lie down in the dry sauna.

● Bring flip-flops, which you leave outside the sauna.

● An infusion is the exciting time at which the Bademeister, or bath master, enters the sauna and pours water on the rock, creating extra heat and steam, then whips the air around with a towel. The only time I’ve experienced one was in Darmstadt, with a German ladies’ bowling club. Our Bademeister were two energetic men, also naked. Obviously, it was an unforgettable experience.

At Sauna Paradies, I wore a robe to venture to the outdoor area that features a half dozen saunas, including one with bird sounds, a pool and even a lake.

Tip: You can wear a robe! Or a big towel. Also, take a shower first.

Then came the hardest part: the disrobing. I hung the robe up on the provided rack and as quickly as I could without creating excessive jiggling as I got into the pool. Already afloat were several elderly men and women, some of them wearing caps, basking in the warm water. Ah! It felt great. And no one can see you when you’re submerged.

By the time I was ready to get out, I’d seen a number of other people — of varying ages and, seriously, all sizes — get into and out of the pool, and I felt less self-conscious.

I headed to the first sauna in the cold air and sat in the little wooden hut heated to a toasty 90 degrees Celsius — 194 degrees Fahrenheit — where, according to some, the heat not only releases toxins and stimulates numerous bodily organs, it also makes you lose weight.

It was so quiet, too. Tip: Minimal talking is good sauna etiquette.

Almost immediately, however, I was joined by the same guy I thought might have been inappropriately smiling at me in the pool. He had followed me. Now he was actually winking. What was his problem?

Tip: Women, unless unflappable, should go with a friend, partner, husband, boyfriend or bowling club.

I got rid of the pest after telling him several times that I was not interested. Then I sampled all the saunas, inside and out, alternating with dips of freezing cold water.

I ended just before my four hours were up with a warm shower and a nap on a heated stone slab.

Directions The address is Miramar, Waidallee 100, 69469 Weinheim. From Heidelberg, take A5 north. At junction 33-Kreuz Weinheim keep right and follow signs A659 toward Mannheim/Viernheim/Weinheim. Keep right at the fork, follow signs for Weinheim and take B-38. Turn right onto Mannheim Strasse/L3408, then right on Pappelallee.

Go left on Breslauerstrasse, right on Multring and right again onto Waidallee. Maps and directions available on the website.