Guanacos, a South American hoofed mammal similar to a llama, prepare to eat food offered by guests at the Opel Zoo in Konigstein, Germany. The zoo has food machines set up around the animal enclosures to allow guests to feed many of the species. (Dan Stoutamire/Stars and Stripes)

Guanacos, a South American hoofed mammal similar to a llama, prepare to eat food offered by guests at the Opel Zoo in Konigstein, Germany. The zoo has food machines set up around the animal enclosures to allow guests to feed many of the species. (Dan Stoutamire/Stars and Stripes) 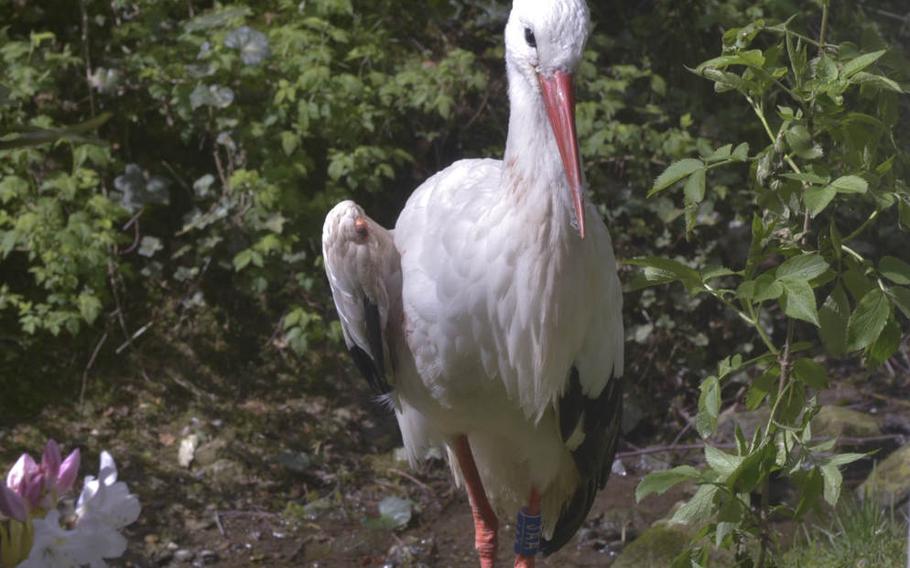 An oriental ibis relaxes after a swim at the Opel Zoo in Konigstein, Germany. The zoo, located about 20 minutes from Wiesbaden and Frankfurt in the Taunus mountains, has a special waterfowl enclosure. (Dan Stoutamire/Stars and Stripes) 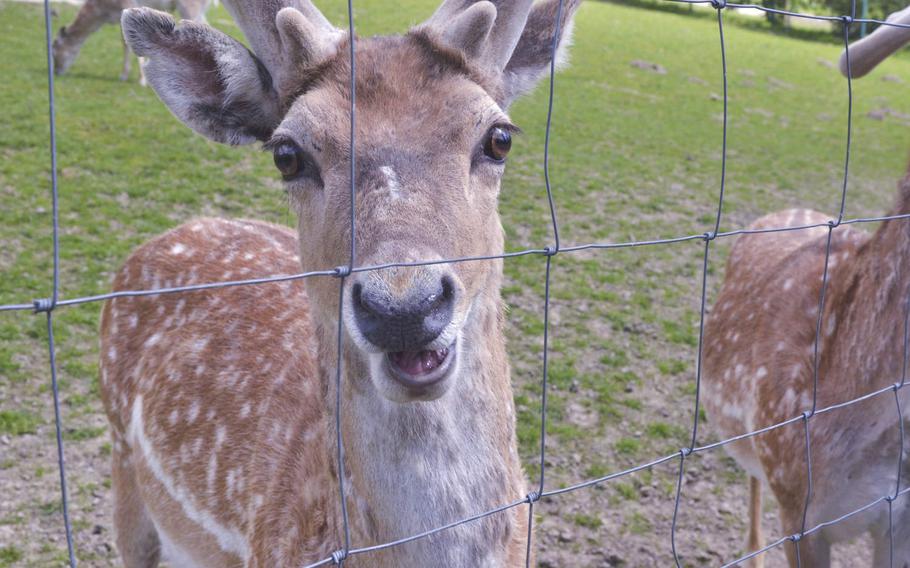 A Mesopotamian fallow deer looks out from its enclosure at the Opel Zoo in Konigstein, Germany. Zoo founder Georg von Opel was particularly fond of the species, and endured multiple hardships to bring some of the animals here. (Dan Stoutamire/Stars and Stripes) 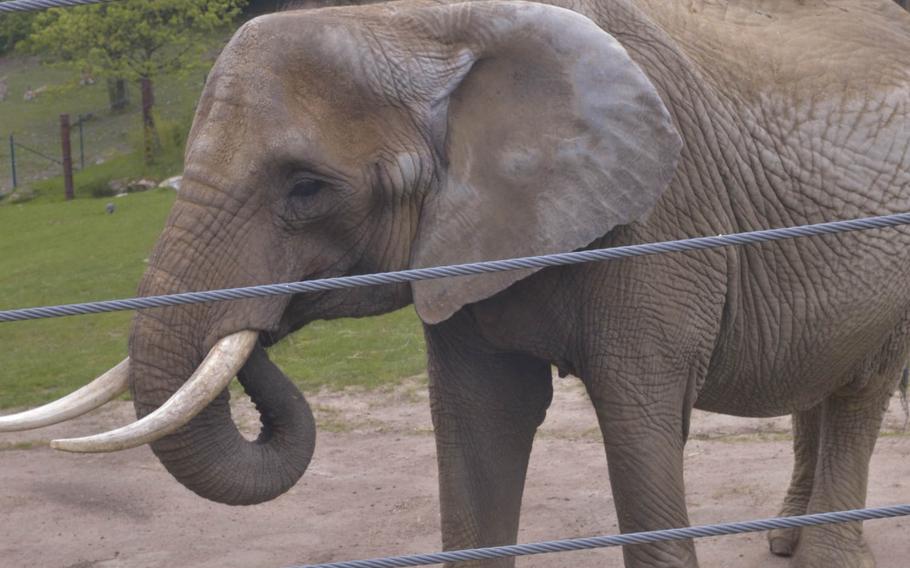 An African elephant eats at the Opel Zoo. The park contains the only elephants in the German state of Hessen, which are housed alongside giraffes and zebras in one of Europe's largest enclosures. (Dan Stoutamire/Stars and Stripes) Meerkats enjoy the sun in their enclosure at Opel Zoo. The park has a small colony of the African mammals which are known for their burrows and ability to stand guard for hours on end. (Dan Stoutamire/Stars and Stripes) 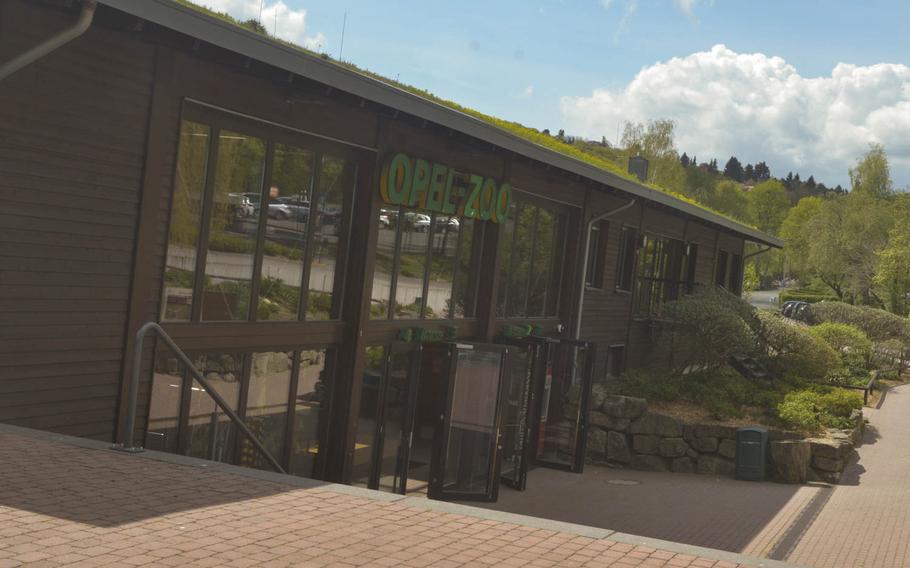 The entrance to the Opel Zoo in Konigstein, Germany, just 20 minutes from Wiesbaden and Frankfurt. The zoo houses more than 1,500 animals from more than 200 species drawn from every continent except Antarctica. The zoo is celebrating its 60th anniversary in 2016 with daily educational demonstrations at 2 p.m. until Oct. 30. (Dan Stoutamire/Stars and Stripes)

Nestled in the heights of the Taunus mountains amid some stunning vistas of nearby Frankfurt, Germany, the Opel Zoo in Kronberg is a sprawling expanse of restaurants, learning areas and, of course, animal-viewing areas.

The zoo contains roughly 1,600 animals from Africa, Europe, Asia, Australia and the Americas. These include the only elephants in the German state of Hessen, who spend their days in the same large enclosure — one of Europe’s largest — as fellow African natives giraffes, zebras and antelope.

Other species featured by the zoo include meerkats — be prepared for a crowd around their enclosure — but they are worth the trip alone. Constantly on alert for predators, they take turns standing guard, making for some great photo opportunities.

The zoo, founded in 1956, is celebrating its 60th anniversary this year with daily educational talks and demonstrations by zookeepers and staff educators. These start every day at 2 p.m. and run until the end of October.

Once inside the zoo, guests can wander freely or follow guideposts for a short tour or long tour. I chose the long one, and without breaks it took about three hours to get all the way around the compound and still have time to appreciate the variety of wildlife. The short tour takes about half as long.

If all the walking makes you hungry, there are two restaurants at the zoo. The Lodge, which specializes in steaks, sits just outside the zoo’s gates, and the Sambesi restaurant, which is located inside the entrance. Both have outdoor seating that overlooks the elephant, giraffe and zebra enclosure. Throughout the park there are kiosks that sell hot and cold drinks and snacks.

One of the zoo’s trademark animals is the Mesopotamian fallow deer. Originally hailing from what are now Iraq and Iran, the species was severely threatened, with fewer than 25 left in the wild. Opel Zoo founder Dr. Georg von Opel formed and led an expedition to Iran to bring some back and preserve the species. Since then, more than 250 have been born in the Opel Zoo, and many have gone on to other zoos around the world. Visitors now can see a fawn born in April, among about 20 adults and adolescents.

For children, the zoo offers daily camel and pony rides, along with multiple large playgrounds scattered throughout the park. Guests who would rather cook their own lunch are welcome to use grill huts with a reservation (at least 24 hours ahead). Dogs on leashes are allowed.

Address: Am Opel-Zoo 3, Kronberg, Germany 61576. Bus: Line 261 to Opel Zoo stop. Driving: From Wiesbaden, head east on A66, then north on B519/B8 just past the Main-Taunus Zentrum mall. Finally, take a right (east) on B455; parking will be on the right. There are several free parking lots adjacent to the entrance.