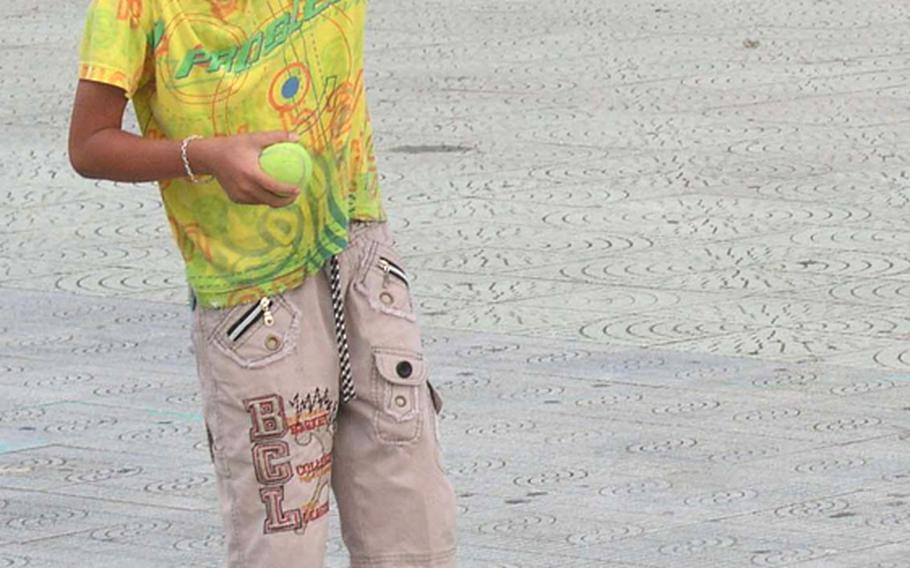 On the public square he and his friends use for playing baseball in Dien Bien Phu, Vietnam, Nong Duc Anh, 10, gets ready to throw a pitch on a summer afternoon. (Franklin Fisher/Stars and Stripes)

On the public square he and his friends use for playing baseball in Dien Bien Phu, Vietnam, Nong Duc Anh, 10, gets ready to throw a pitch on a summer afternoon. (Franklin Fisher/Stars and Stripes) 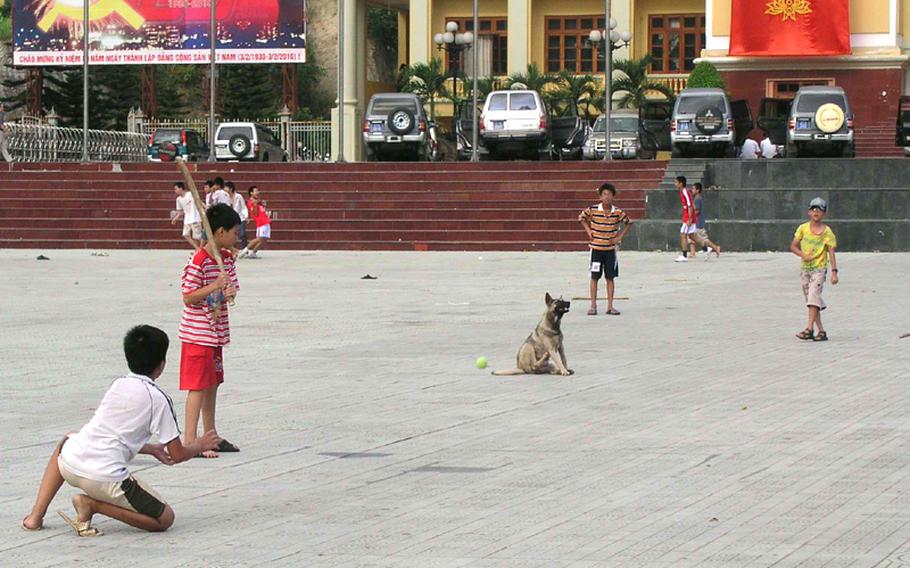 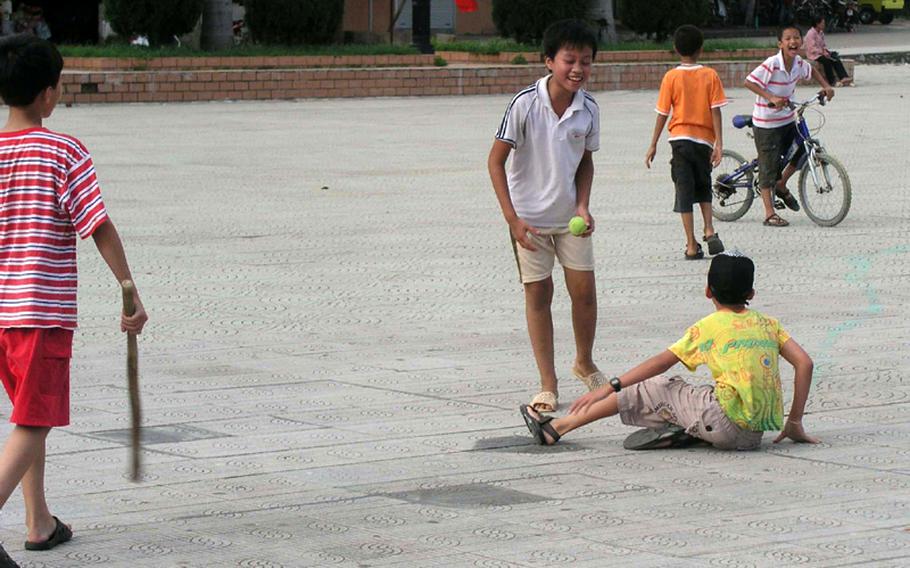 On the public square in Dien Bien Phu, Vietnam, local boys share a laugh while playing baseball, a game they've learned from TV and have embraced with zeal. On the ground is Nong Duc Anh, 10. Standing over him is Dang Quang Anh, 12. (Franklin Fisher/Stars and Stripes) 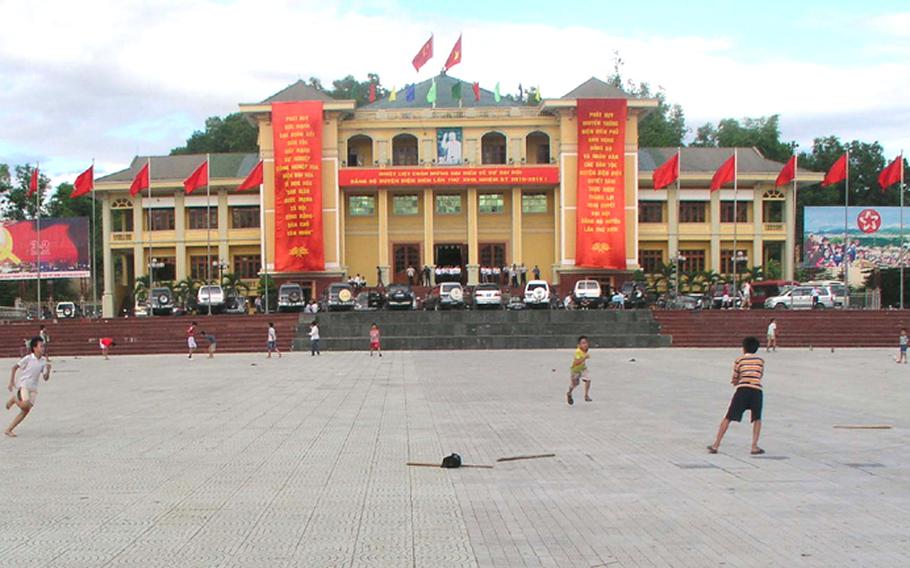 During a baseball game on the public square in Dien Bien Phu, Vietnam, Dang Quang Anh, 12, sprints for home plate while pitcher Nong Duc Anh, 10, and catcher Nguyen Dinh Tuan, 14, hustle to put the runner out. (Franklin Fisher/Stars and Stripes)

It was a hot day during a recent trip to Vietnam when I saw something so improbable that for a moment I wouldn&rsquo;t trust my eyes.

There, in a town that was part of the former North Vietnam &mdash; when the country was in a long, bloody struggle with the United States a little more than three decades ago &mdash; boys were playing baseball. Yes, bats, balls and kids playing the quintessential American game on the broad, gray, public square below a tan Communist Party building flying red flags and hung with red banners, one emblazoned with the hammer-and-sickle emblem.

And they were playing the American pastime well, showing smooth form and precision.

Four of them, Nong Duc Anh, 10, Dang Quang Anh, 12, Nguyen An Tuan, 14, and Nguyen Dinh Tuan, 14, told me they&rsquo;d learned the game watching it on TV. Their heroes? The New York Yankees.

I remember a different Vietnam, as an Army paratrooper wounded in 1971 while serving with the 173rd Airborne Brigade in the Central Highlands of what was then South Vietnam.

But this was Dien Bien Phu, a place in the far northwest of the country that came to symbolize more than any other the unrelenting Vietnamese resistance to foreign powers. It was here, on May 7, 1954, that a broken French army surrendered to the Communist Vietminh after an epic siege that has been ranked among the most decisive battles in history. It was the Waterloo-like death blow to the French colonial presence in Indochina. And it eventually gave way to the 10-year war with the United States, which sided with South Vietnam.

Now I was witnessing the American game I grew up with being embraced by kids whose fathers or grandfathers I might have encountered in war.

I hurried to the square for a closer look.

There were six of them, rail thin, in shorts, jerseys and sandals. In a far corner of the courtyard, other boys had a soccer game going. In another, a boy flew a big orange kite. It was a peaceful, late summer afternoon, with blue strips of sky visible through low white cloud banks &mdash; and on the horizon the infamous hills below which the beseiged French lost Vietnam.

Lacking real baseball gear, the boys were a study in homespun improvisation.

They&rsquo;d fashioned sticks into something like bats. No gloves. No softballs or real baseballs, either; they were making do with a bright, green tennis ball. But they all had ball caps.

And the way they pitched, batted, fielded and ran the bases, they knew what they were doing.

Soccer is still the dominant sport in Vietnam, as it is in much of the rest of Asia and the world. Unlike Japan and South Korea, Vietnam has no players in the American big leagues &mdash; yet. But baseball has begun making bigger inroads in the country with the government&rsquo;s support.

As I was leaving and said good-bye, one of them said to me in English: &ldquo;Good luck.&rdquo;

Yeah, kid, I thought. &ldquo;Thank you. Good luck to you, too.&rdquo;