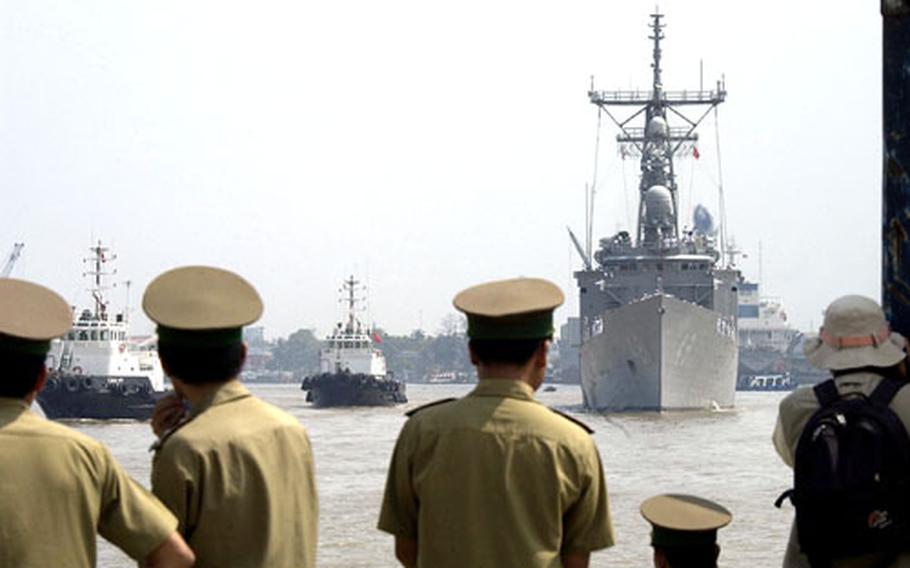 The USS Vandegrift arrives in Ho Chi Minh City, Vietnam, for a scheduled port visit, the first by a U.S. Navy ship to Vietnam in 30 years. (Photos by Gary Granger / U.S. Navy)

The USS Vandegrift arrives in Ho Chi Minh City, Vietnam, for a scheduled port visit, the first by a U.S. Navy ship to Vietnam in 30 years. (Photos by Gary Granger / U.S. Navy) 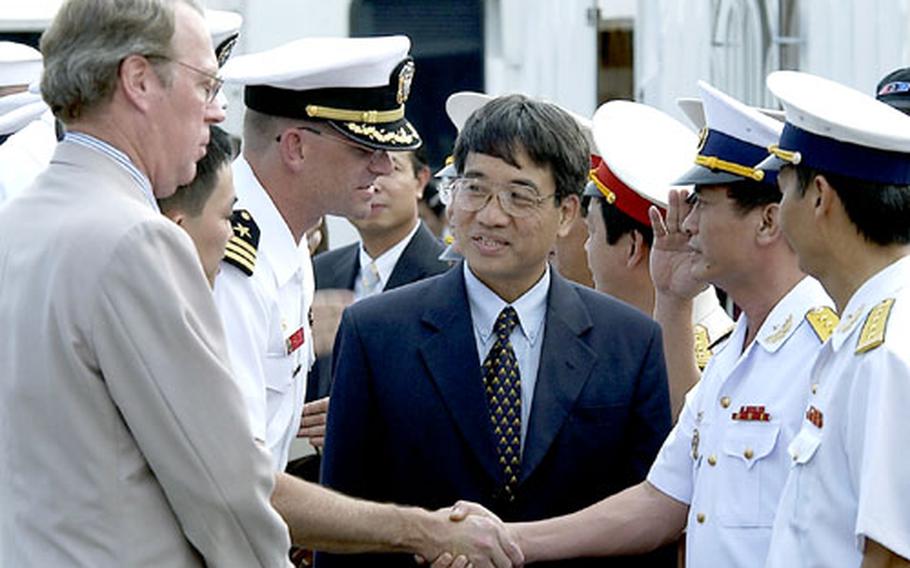 Vietnamese officials greet Cmdr. Richard Rogers, the commanding officer of the Vandegrift, and Raymond Burghardt, the U.S. ambassador to Vietnam. The visit symbolizes the normalization of relations between the two nations. () 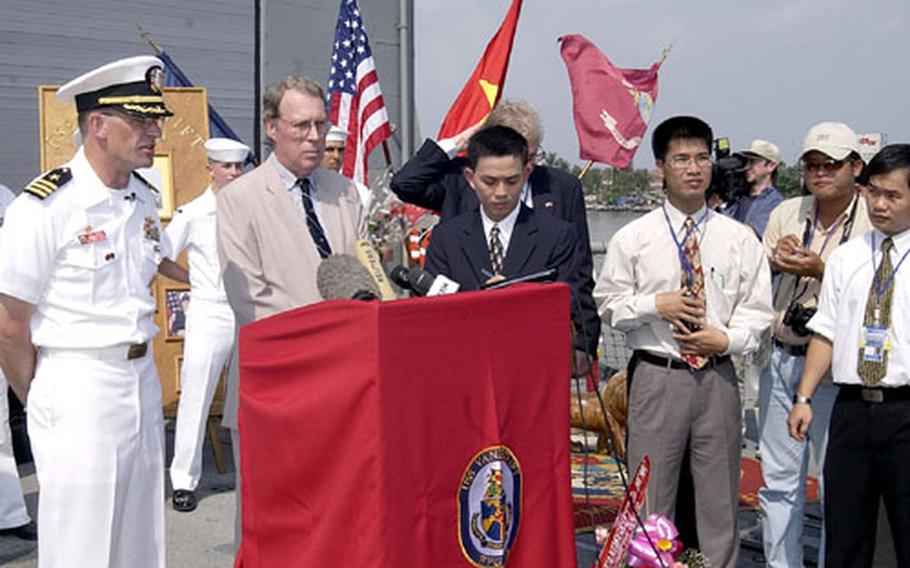 Cmdr. Richard Rogers, left, joins Raymond Burghardt, the U.S. ambassador to Vietnam, center, for a press conference on the Vandegrift. () 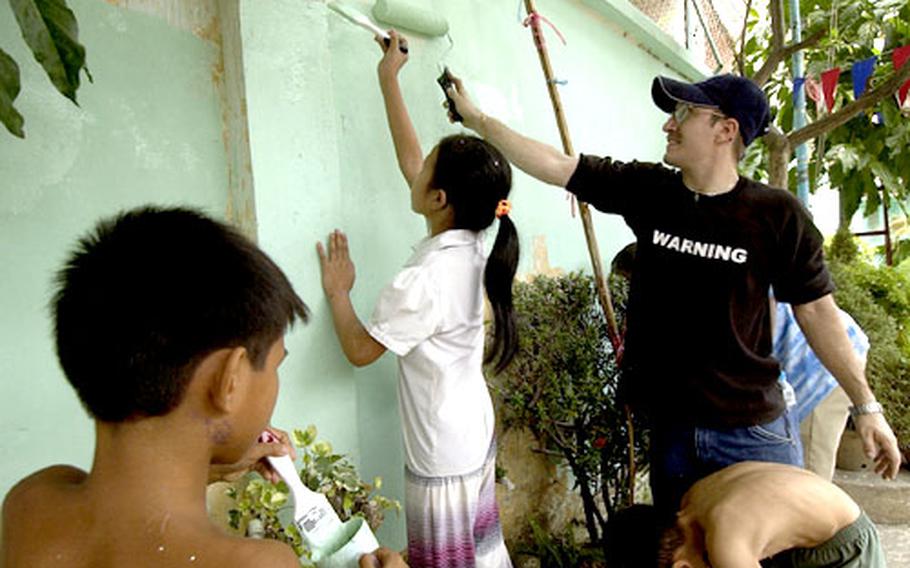 During a community relations project at a schoolhouse, Petty Officer 3rd Class Ronald Voelker of Alba, Michigan, joins in painting the walls of the building. () 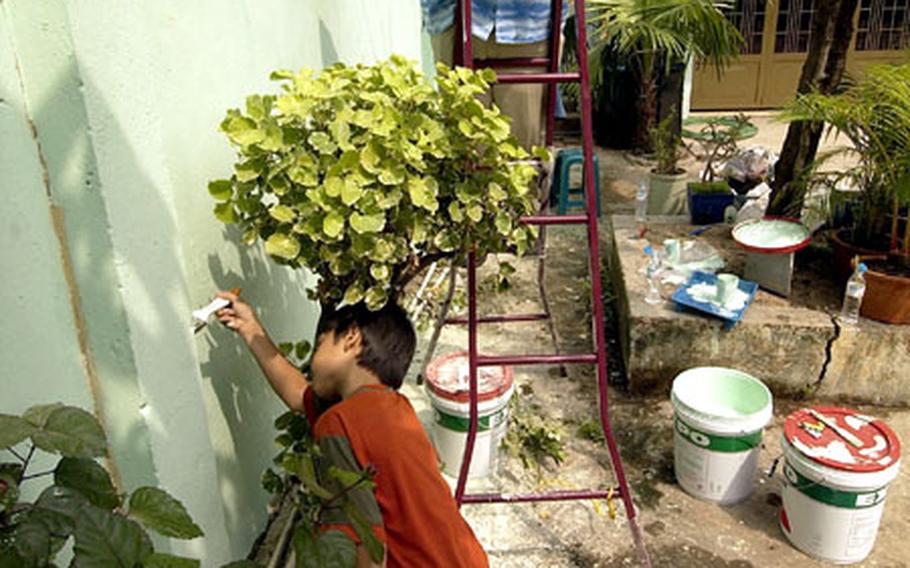 YOKOSUKA NAVAL BASE, Japan &#8212; Singapore was fun. Bahrain was interesting. China was great. But of all the exotic ports the sailors of the USS Vandegrift have visited &#8212; in 12 different countries since March &#8212; none made as much history as their trip to Ho Chi Minh City.

The guided missile frigate last month became the first U.S. warship to steam up the Saigon River and into port in the former South Vietnamese capital since the Vietnam War ended 30 years ago. And everybody aboard knew the world was watching.

&#8220;The first day we pulled in, we had The Associated Press, CNN, Reuters &#8212; they all came on board,&#8221; said Petty Officer 1st Class Christopher Stenger. Pretty soon, the St. Paul, Minn., native found himself walking around the city with a Reuters reporter and cameraman, who watched him look at the famous liberty hotels from the Vietnam War and the statue of Ho Chi Minh reading to a child.

The ship&#8217;s crew of 210 had been briefed on the importance of discretion, politeness and propriety on the visit, which had been in the planning for some months and signaled a continued attempt between Vietnam and the United States to normalize relations, a process that started in 1995.

Followed by, &#8220;Be responsible. Control ourselves, so there would be no incidents,&#8221; said Seaman Ruben Becerra.

During the four-day, incident-free visit, Rogers, his officers and crew held news conferences, took tours, dined with the Vietnamese Navy, lost at volleyball, dug foundations, got stuck in the infamous tunnel system used by Vietnamese fighters, and played host at an on-board reception that feted hundreds.

The deck filled with diplomats and defense attaches, local dignitaries, military officers, and especially, Rogers said, business leaders. They all apparently had such a fine time, as the music played, drinks were poured and chili rellenos passed around, that they stayed far longer than scheduled. &#8220;The energy in the crowd that night was probably something I&#8217;ll never experience again,&#8221; Rogers said. &#8220;It was a once-in-a-lifetime event.&#8221;

It also was Rogers&#8217; job to lay a wreath at the Ho Chi Minh monument, built for the communist leader who had withstood the United States in a war that killed 58,000 Americans and an estimated 3 million Vietnamese. His father-in-law had served in the war, Rogers said. Still, laying the wreath was &#8220;not that odd.&#8221;

Those aboard said the trip provided many unique experiences. Ensign Nick Nordvall, the conning officer, steered the Vandegrift for half of the four-hour journey up the busy river. Under a blazing sun, Nordvall ignored the passing scene on shore, the mango trees and groups of thatched houses, the emerging factories. He had to keep his eye on tankers, cargo vessels and little sampans while keeping in mind he had just four meters of water, about 13 feet, between ship bottom and riverbed.

Just as hot &#8212; but less mentally taxing &#8212; were the three community-relations projects that had been arranged, and for which a quarter of the ship&#8217;s sailors volunteered. They dug a foundation, painted a school and brought toys to an orphanage.

Stenger, 31, joined the group digging a foundation for a school addition. He traveled two hours into the countryside in a diplomatic motorcade. When they stopped in the village, 100 or so local people, who had gathered to await them, began to applaud. Then, after a welcome ceremony, some 253 sailors started digging. &#8220;It was really hot out. It was thick clay,&#8221; Stenger said. &#8220;But everyone was having a good time.&#8221;

Petty Officer 3rd Class John Lawson, 21, volunteered too, but was told all the slots were taken. That left him to his liberty to roam around the bustling city, eating &#8220;wonderful&#8221; food, talking with the many people on the street and shopping. He bought a $50 lacquer wall hanging depicting a fishing village for his mother and, for himself, a $300 embroidered rendering of a silver fir forest with a temple in the background.

Becerra said he was surprised at the many Vietnamese people who spoke English, and at how friendly they were. It reminded him a little of China, he said, where &#8220;the people offered to take you out to lunch because they wanted to practice their English.&#8221;

Becerra was one of many sailors who enjoyed the night life as well. Some went to the &#8220;Apocalypse Now&#8221; bar, a tourist hangout named for the film about the war&#8217;s brutality and man&#8217;s heart of darkness.

But Becerra preferred the Spaceship nightclub. While he was there, he said, he made his own little diplomatic coup. He had a few pins the sailors were to wear on their breast pockets, courtesy of the U.S. Embassy, of the Vietnamese and U.S. flags together. He gave one to his waitress and one to the bartender.