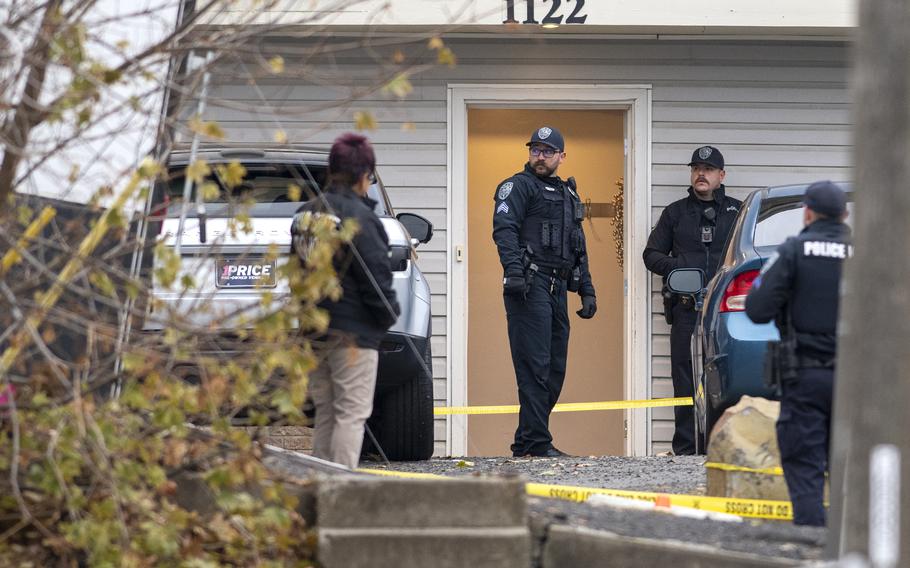 Officers investigate a homicide at an apartment complex south of the University of Idaho campus on Sunday, Nov. 13, 2022. Four people were found dead on King Road near the campus, according to a city of Moscow news release issued Sunday afternoon. (Zach Wilkinson, The Moscow-Pullman Daily News via AP)

MOSCOW, Idaho — Police have identified the four University of Idaho students who were found dead in a home near the Moscow, Idaho campus on Sunday.

The Moscow Police Department has called the deaths "homicides," and on Monday identified the victims as Ethan Chapin, a 20-year-old from Conway, Washington; Madison Mogen, a 21-year-old from Coeur d'Alene, Idaho; Xana Kernodle, 20, from Avondale, Arizona; and Kaylee GonCalves, 21, from Rathdrum, Idaho.

Officers with the Moscow Police Department discovered the deaths when they responded to a report of an unconscious person just before noon, according to a press release from the city.

Authorities did not release additional details, including the cause of death.

"Details are limited in this investigation. Currently, there is no one in custody," the police department wrote in a press release. "The Moscow Police does not believe there is an ongoing community risk based on information gathered during the preliminary investigation."

The police said anyone with information should contact the department and asked that people respect the privacy of the victims' family and friends.

Brian Nickerson, the fire chief of the Moscow Volunteer Fire and EMS Department, said police were the first to arrive at the home. The first responders from the fire and EMS department didn't go inside or transport anyone from the scene, Nickerson said.

"It is with deep sadness that I share with you that the university was notified today of the death of four University of Idaho students living off-campus believed to be victims of homicide," University of Idaho President Scott Green said in a statement posted to Facebook on Sunday night. "Out of respect for these fellow Vandals, classes statewide and online are canceled Monday, Nov. 14."

The university said counselors would be available for students at the campus counseling center, while employees could access assistance through an employee assistance program. Green urged people to reach out if they were concerned about classmates or coworkers.

"An event of this magnitude can understandably have significant impacts on those left behind," Green wrote. "As Vandals, we must come together and lift each other up."

Shortly after the bodies were found, the university advised students to shelter in place for about an hour until investigators determined there was no active threat to others in the region.

The Moscow Police Department said the investigation was ongoing and asked people with information to call the department.

The city of Moscow is a close-knit college town nestled in the rolling hills of north-central Idaho, about 80 miles (130 kilometers) southeast of Spokane, Washington.

Shortly after Moscow police announced the death investigation, students at the University of Virginia were also told to shelter in place after police said a suspect gunned down fellow students on a bus as they returned from a school field trip. The shooting left three members of the school's football team dead and two students injured. The shooting touched off an intense manhunt Sunday, and authorities announced Monday that a suspect, Christopher Darnell Jones Jr., had been apprehended.

The deaths at both universities had officials and other colleges sending messages of condolences.

"We were shocked to learn of the tragic deaths of four @uidaho students this weekend in Moscow. We mourn for the lives lost, and grieve with their loved ones and the entire Vandal community," Boise State University wrote on Twitter on Monday. "Our hearts also go out to the @UVA community where violence has claimed three lives."

U.S Representative Mike Simpson wrote on Twitter that he and his wife, Kathy Simpson, were sending their deepest condolences to the UI students' families.

"Our hearts ache for your loss," Simpson wrote. "Today we are all Vandals."