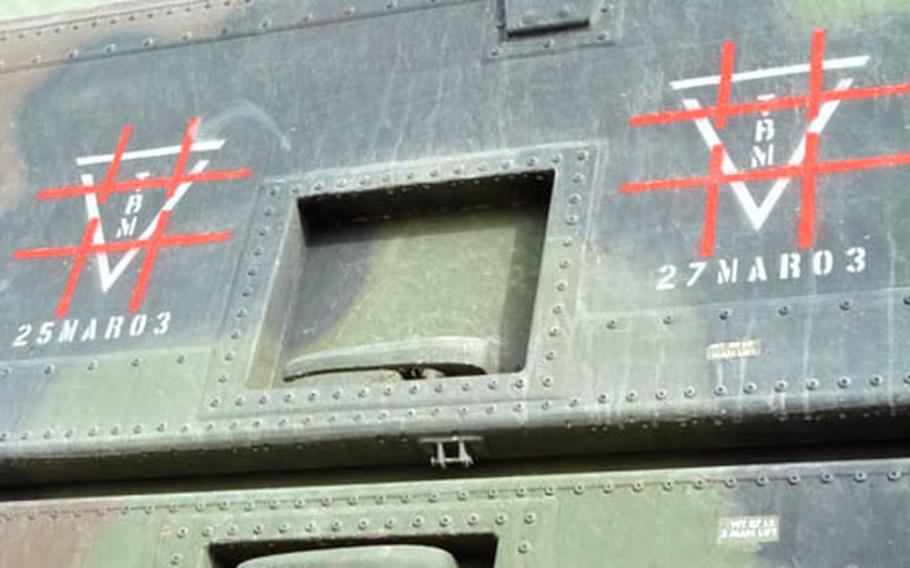 Hash marks painted onto the side of the radar system represent two Scud missile “kills.” (Photo courtesy of Mark Nussbaum)

Hash marks painted onto the side of the radar system represent two Scud missile “kills.” (Photo courtesy of Mark Nussbaum) 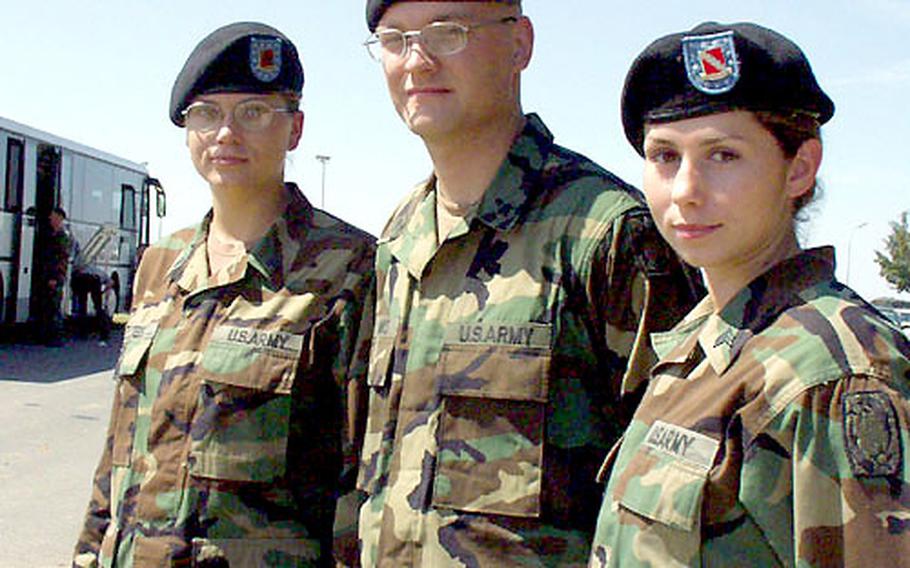 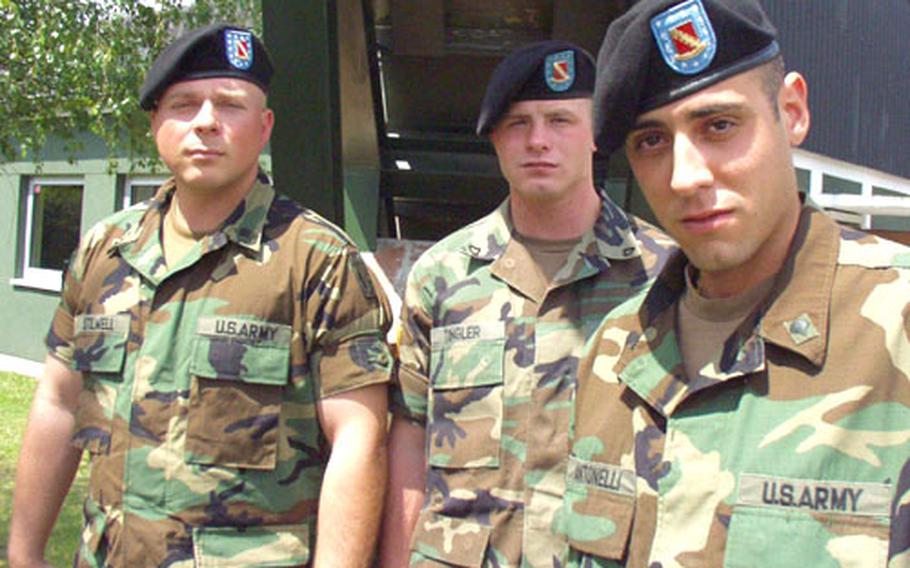 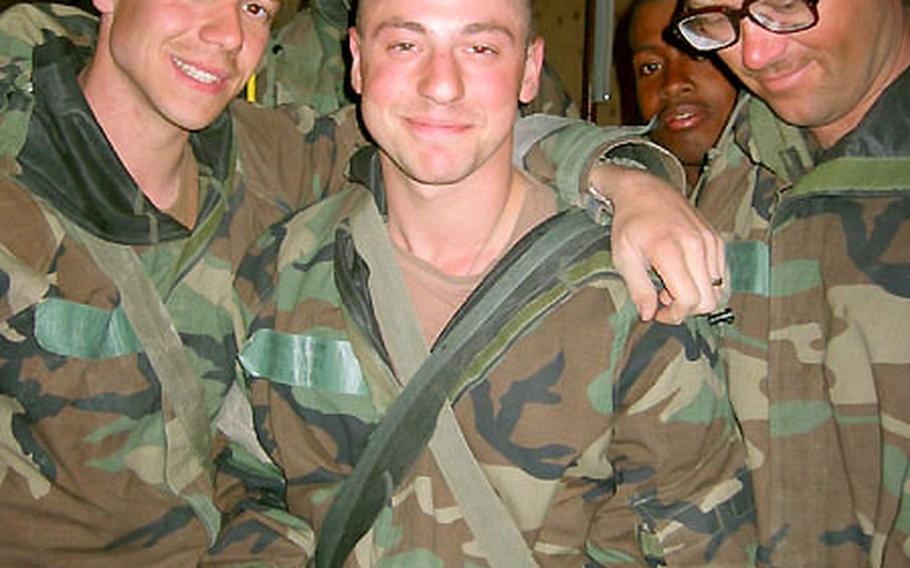 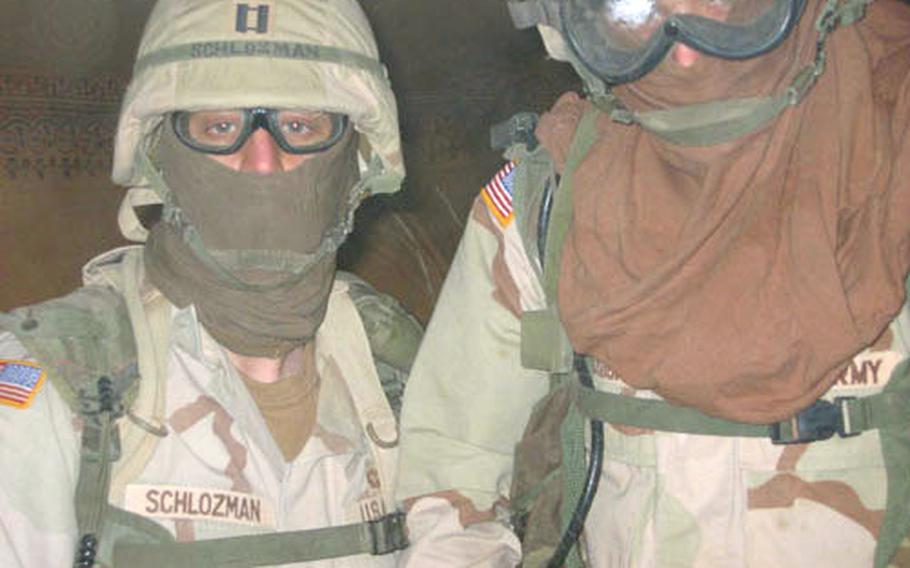 KATTERBACH, Germany &#8212; Spc. Helen Stees sat uncomfortably on the floor of the van, watching the radar scope and chatting with the two soldiers who shared her duty post.

On March 27, six days into the invasion of Iraq, Stees&#8217; unit &#8212; the 6th Battalion, 52nd Air Defense Artillery, a Patriot missile battery from Katterbach, Germany &#8212; had experienced a rather cloistered war. She worked as a communications specialist with Charlie Battery, which was camped across the street from Camp Doha, Kuwait. Their job: defending the command post of the Coalition Forces Land Component Command against Iraqi missiles.

Suddenly, a radio voice from the headquarters command invaded the quiet of the van.

The team quickly checked the object&#8217;s source, altitude and trajectory. Piek sent out an electronic Identify Friend or Foe signal to make sure it wasn&#8217;t a coalition aircraft.

They had no time to waste. The object was coming from Basra, less than 100 miles away &#8212; a distance that an Iraqi al-Samoud missile can cover in less than half a minute, said Capt. Craig Schlozman, Charlie Battery&#8217;s commander.

Satisfied the target was hostile, Piek pressed a button and launched two Patriots at it. Each shot out of the canister and took a sharp left turn.

Within three or four seconds, a horrific explosion rocked Camp Doha. Spc. McKena Jordan, 22, of Roberta, Ga., was monitoring a radio at the headquarters building.

&#8220;I thought we got hit,&#8221; said Jordan, a Charlie Battery chemical specialist. &#8220;We heard a big bang. Everybody paused for about five seconds. It sounded like artillery was getting shot at us. It was like thunder.&#8221;

Debris rained down on the edge of Camp Doha, a CNN journalist embedded there later reported.

The interception prompted celebration in Charlie Battery. Two days earlier, the unit also had brought down a Scud missile over northern Kuwait.

Some of the soldiers salvaged pieces of debris from the Scud as souvenirs, and they proudly drew two Scud symbols with lines through them on the side of their vehicle.

Weeks later, after the war had ended, Schlozman&#8217;s team learned the truth from CNN, which had kept the information secret to avoid aiding Saddam Hussein. The Scud had been the Iraqi dictator&#8217;s attempt at a decapitation strike, perfectly aimed at CFLCC&#8217;s headquarters. Army air defense experts determined it likely would have hit the building where the coalition ground forces commander, Lt. Gen. David McKiernan, was then holding his morning briefing.

Their work that morning had saved lives &#8212; including, perhaps, their own.

Soldiers in the unit received their deployment orders Feb. 10, joining a host of other V Corps assets dispatched from Europe to Kuwait for the invasion everyone knew was coming.

They quickly packed up their equipment at Shipton Barracks in Katterbach for shipment to the Middle East. Each battery includes a communications vehicle, radar, a launch console, a power-generation truck and seven mobile launchers, all connected by fiber-optic communications and FM radio to an engagement-control station. They also packed the usual complement of tents, trucks and Humvees.

Once their gear was gone, the 6-52 soldiers had little to do but wait. They still didn&#8217;t know when they would leave or precisely where they were headed.

&#8220;We just watched CNN, like everybody else,&#8221; said Spc. Matthew Antonelli, 25, of Antioch, Ill., a Stinger missile crewmember from Charlie Battery.

The battery, 118 soldiers strong, left first on March 10, but four other batteries and the headquarters company followed the same path: to Ramstein Air Base, Kuwait City International Airport, waiting hours for buses at nearby Camp Wolf, and finally a five- to six-hour, middle-of-the- night crawl across the desert to their tents at Camp Virginia.

Although Camp Virginia was swamped with newly arrived troops, the soldiers from the 6-52 ADA found life there rather cushy. The ate a hot breakfast and hot dinner in chow hall tents, making do with prepackaged Meals, Ready to Eat for lunch.

Besides ferrying their equipment from the port, the soldiers busied themselves with classes and drills. Still, camping in the hot desert without air conditioning and with few duties started to take its toll in the days before the war.

The day the war started, Stees and her communications noncommissioned officer, Sgt. Tanya Wilson, 22, of Santa Maria, Calif., were headed back from the port with Charlie Battery&#8217;s equipment. As they passed Ali Al Salem Air Base, an American post on the western edge of Kuwait City, some military police in full chemical gear flagged them down on the highway.

The MPs couldn&#8217;t be heard through their chemical masks.

Quickly they got the message, though: The war was on, and Saddam had begun firing missiles at Kuwait. They hurried back to Camp Virginia and spent the next three days testing their gear.

The rest of the 6-52 ADA members hadn&#8217;t received their equipment yet. Because of that, their war took them in a different direction.

According to the original plan, Schlozman said, Charlie Battery was to convoy north to Talil Air Base with another unit from Camp Virginia, the 507th Maintenance Company of Fort Bliss, Texas.

Had the unit done so, its war might have turned out far differently. Iraqi fedayeen ambushed the 507th Maintenance, executing some of their captives.

After five days at Doha, Charlie Battery jumped across the border to Talil, just outside Nasiriyah. At about the same time, the other 6-52 ADA members headed farther north to Camp Bushmaster, a dusty airstrip near Najaf.

Ten days into the war, their convoy rides were a bit less painful than for those units who drove north in the first assault. They traveled only a few hours each day, and only in daylight. Still, they sweltered in their heavy chemical suits and saw plenty of sobering sights.

For most of the soldiers in the 6-52 ADA, their only limited contact with Iraqis came during the convoy. Although no one fired at them or acted hostile, young men and boys swarmed the convoys. Antonelli said one soldier got punched in the face. Another had his glasses pulled off.

Saddam had stopped firing missiles, so the batteries had little to do while they camped in Iraq. Antonelli said Charlie Battery never fired again.

Besides supporting the Jessica Lynch rescue, they also stood guard against attacks by ultralight aircraft during the U.S.-sponsored conference of Iraqi religious and political leaders that followed the fall of Baghdad. At night, they could watch the fireworks to the east in Basra, where British marines continued to fight stubborn resistance for weeks.

After a few weeks at Bushmaster, the 6-52 ADA&#8217;s other companies moved north to Baghdad. Stilwell, working in the command tent, pored through the reports on the war.

Charlie Battery headed back to Camp Virginia on April 23, the rest of the unit about a month later. The 6-52 ADA soldiers cleaned and packed their gear for shipment home. With their things gone, they couldn&#8217;t even train. They worked out and tried to stay cool. The heat forced them out of their tents early each morning.

They finally limped out of camp in mid-June, most of the troops arriving home to Katterbach on June 20. The last group arrived July 10.

For Stilwell, the delay had been excruciating. He knew his wife, Sgt. Shelomi Stilwell, 27, would be waiting for him with his brand new son, Tyler. The baby had been born March 26, three weeks ahead of schedule.

Shelomi Stilwell had been wary of having her first baby at home alone, but the Army rejected Scott&#8217;s request to stay home an extra 30 days.

Her biggest fear was that Tyler would put up a fuss when he met his daddy.

That didn&#8217;t happen. When Scott bounded off the bus, mother and son both were thrilled to see him.

Homecoming and the return to garrison life have given the soldiers of the 6-52 ADA time to think about their war experience. Most of the time they were not on the front lines, of course, but some still found it less intense than they expected.