Two PC strategy titles that are out of this world 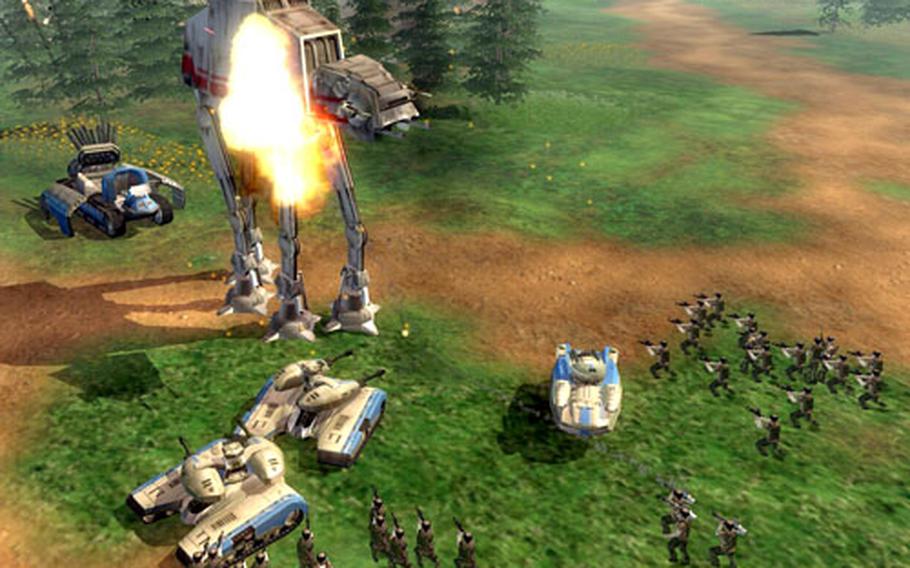 A scene from LucasArts’ new release "Star Wars: Empire at War" for the PC. The game is rated T, for Teen. (Courtesy of LucasArts / SHNS)

Warriors who take their cues from the big screen better keep their rings polished and light sabers energized.

&#8220;Empire at War&#8221; is an all-new work that offers gamers three modes of play. A skirmish mode features battles on land or in space. A story-driven campaign is set just before the original film (now dubbed &#8220;Episode IV&#8221;). This mode relies heavily on the land and space battles featured in the skirmish mode but also involves a lot of interstellar maneuvering to capture and hold planets. The final mode is a free-form interstellar campaign.

The campaign games are designed for keyboard generals who don&#8217;t want to worry too much about resource-gathering and logistics. You get credits based on the planets you&#8217;ve conquered &#8212; no digging for glowing crystals or breeding weird alien animals. You buy your troops, your ships, your upgrades and a few buildings and then you tear off into the galaxy to blast clones or Wookies or those squidlike guys.

The action is engaging and the gameplay is pretty standard for a strategy game. The only problem is the graphics, which consume an awful lot of memory for relatively little return. Set at high resolution, the game&#8217;s stormtroopers don&#8217;t exactly storm &#8212; even on a new computer with a decent graphics card &#8212; and they aren&#8217;t exactly eye-popping. However, the explosions are usually pretty spectacular and the space battles fare better than the land battles.

The original version re-created the battles in the three Peter Jackson movies. In addition to tweaking a few annoying control issues, the new game adds characters, battlefields and even a new method of play. You now can play as goblins, elves and dwarves, in addition to the human heroes and loathsome baddies of the original game.

The basic game is still downright fun, featuring volleys of arrows, cavalry charges and castle sieges. Gamers can still fight single-battle skirmishes and follow a huge story-driven campaign. However, this time, the creators had J.R.R. Tolkien&#8217;s entire Middle Earth library to draw from, not just &#8220;The Lord of the Rings.&#8221; That means many more battles.

However, one of the best things about the new game is a &#8220;Risk&#8221;-like campaign mode that allows you to pick your race, select your enemies, create a unique hero and conquer all of Middle Earth. Strategic decisions are made in a turn-based setting, but battles are fought in real time. This new mode gives the game a lot of depth and replayability.

Both games present compelling stories and strategic and tactical challenges &#8212; all without forgetting to deliver plenty of fun.

On the Web: At EA.com