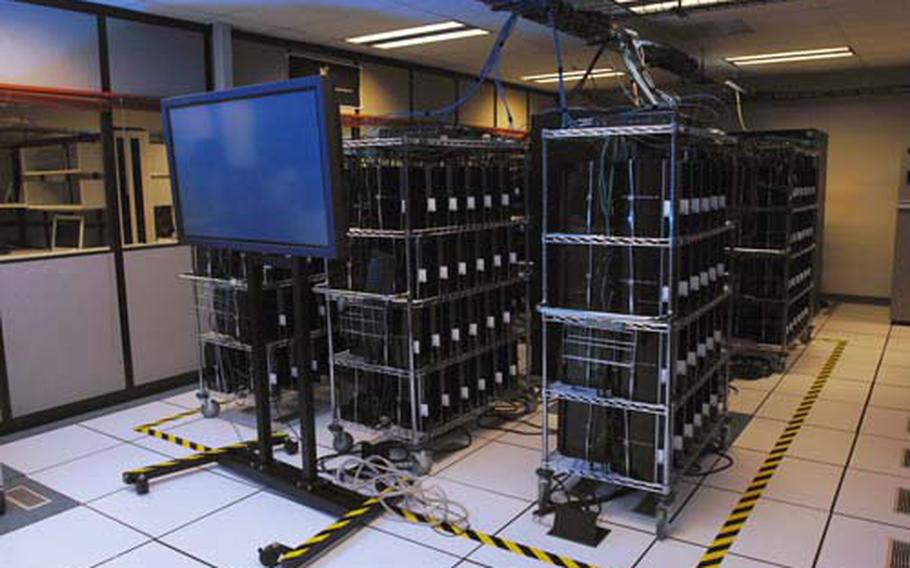 This cluster of 336 PlayStation 3 video game consoles is the beginning of a cluster of more than 2,000 consoles the Air Force is purchasing to create a supercomputer called 500 TeraFLOPS Heterogeneous Cluster, which will be housed at the Air Force Research Laboratory’s Affiliated Resource Center in Rome, N.Y. (Photo courtesy of the U.S. Air Force)

STUTTGART, Germany &#8212; Once thought to be just a part of home entertainment systems, Sony&#8217;s PlayStation 3 is proving itself to be more than just an online death-match machine.

The console&#8217;s price-to-performance ratio inspired one Air Force research team to place an order for 1,700 of them to go with the 336 they already have.

The brains behind the Air Force Research Laboratory in Rome, N.Y., are clustering the consoles, along with some off-the-shelf graphic processing units, to create a supercomputer nearly 100,000 times faster than high-end computer processors sold today.

The research group was awarded a $2 million grant for the PlayStation 3 cluster.

Key to the whole idea is the console&#8217;s cell processor, which was designed to easily work in concert with other cell processors to combine processing power and has been critically acclaimed for its number crunching ability.

&#8220;With Neuromorphic Computing, as an example, we will broadcast an image to all PS3s and ask if it matches an image it has in its hard drive,&#8221; said Dr. Richard Linderman, the senior scientist for Advanced Computing Architectures at the laboratory.

Because of the way the consoles connect online or to each other is relatively slow compared to regular supercomputing setups, the group is limited in what type of programs can be efficiently run on the PS3 supergroup they call the 500 TeraFLOPS Heterogeneous Cluster.

Linderman said the entire system is using mostly off-the-shelf components, and will be a relatively cheap, green machine.

Keeping with the off-the-shelf mentality, the Air Force is using metal shelves found at most department stores to house the PS3 cluster. They are also using Linux, which is a free, open source operating system.

The system will use 300 to 320 kilowatts at full bore and about 10 percent to 30 percent of that in standby, when most supercomputers are using 5 megawatts, Linderman said. However, much of the time the cluster will only be running the nodes it needs and it will be turned off when not in use.

&#8220;Supercomputers used to be unique with unique processors,&#8221; Linderman said. &#8220;By taking advantage of a growing market, the gaming market, we are bringing the price performance to just $2 to $3 per gigaFLOPS.&#8221;

As a point of reference, 10 years ago the University of Kentucky claimed the record of the first unit capable of 1 billion floating point operations per second or gigaFLOPS, to cost less than $1,000. The cost per gigaFLOPS was $640.

They have been able to take advantage of about 60 percent of the PlayStations&#8217; performance ability, Linderman said. Once complete, they are expecting to have a unit capable of 500 teraFLOPS or 500 trillion operations per second.

The Air Force plans to have the 1,700 they recently ordered fully integrated into the system by June as part of the Department of Defense&#8217;s High Performance Computer Modernization Program.

Being part of the DOD program opens the use of the computer to other government agencies and universities that are a part of the program. As for now, the system will be handling unclassified data, but that may change in the future, Linderman said.

This is not the first time PlayStation 3s have been networked together for their processing ability. The Folding@home project allows gamers to volunteer their PS3s and Internet connections while the owners are not using them. The project earned a Guinness World Record for achieving the first petaFLOPS or quadrillion operations per second by a distributed computing network in 2007.

&#8220;I think is just another step in a journey that has been going on for a while,&#8221; Linderman said of using consumer components for supercomputers. &#8220;But, this will be far and away the largest interactive high-performance computer.&#8221;