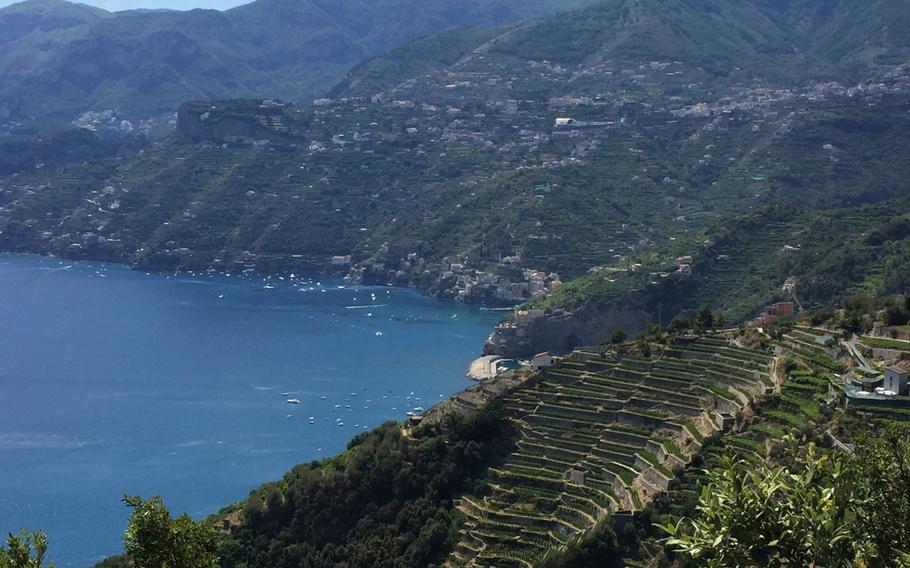 The views become more spectacular as you hike to Santuario dell'Avvocata in Maiori, Italy. (Scott Wyland/Stars and Stripes)

The views become more spectacular as you hike to Santuario dell'Avvocata in Maiori, Italy. (Scott Wyland/Stars and Stripes) 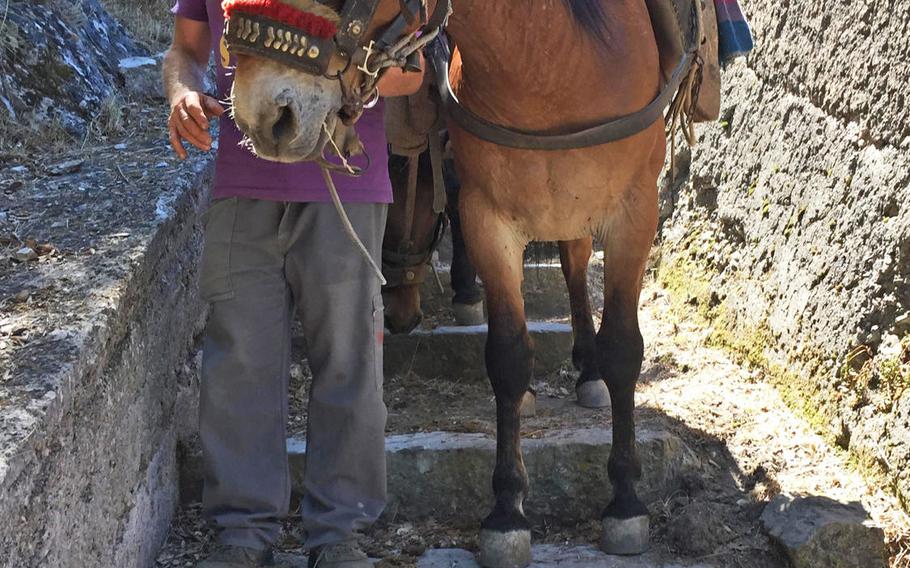 A Maiori resident leads his donkey down the long stairway that connects to the trail to Santuario dell'Avvocata. In this Italian region, donkeys are used to carry people or supplies to places where motorized vehciles can't go. (Scott Wyland/Stars and Stripes) 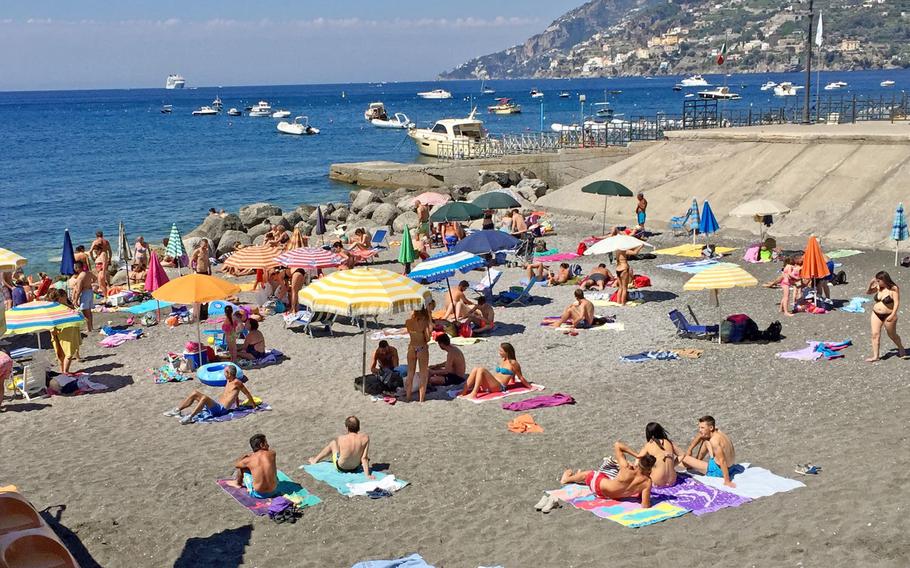 The hike to Santuario dell'Avvocata begins not far from the crowded beaches of picturesque Maoria on Italy's Amalfi Coast. (Scott Wyland/Stars and Stripes) 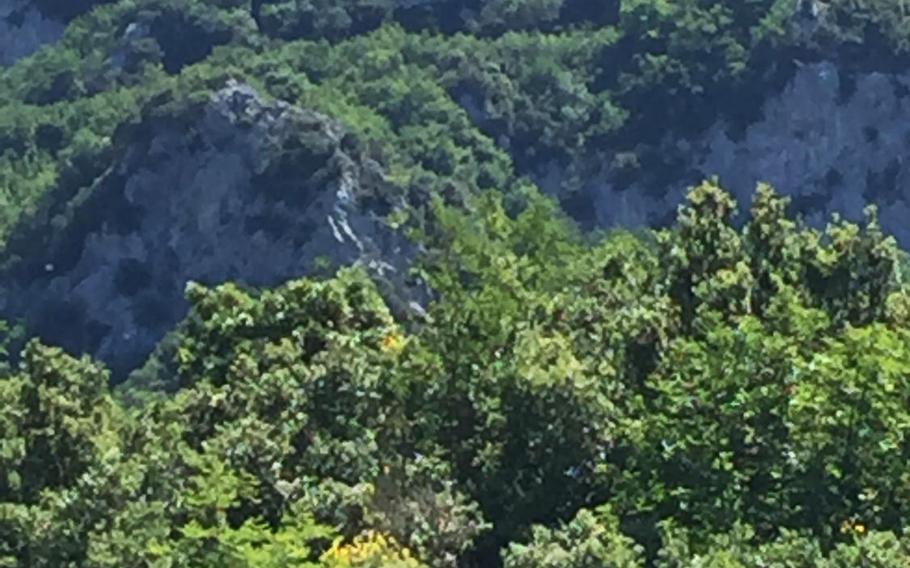 The church at Santuario Dell'Avvocata looks like a tiny, yellow blotch on a lofty peak when you start the hike and takes shape as you approach the summit. (Scott Wyland/Stars and Stripes) 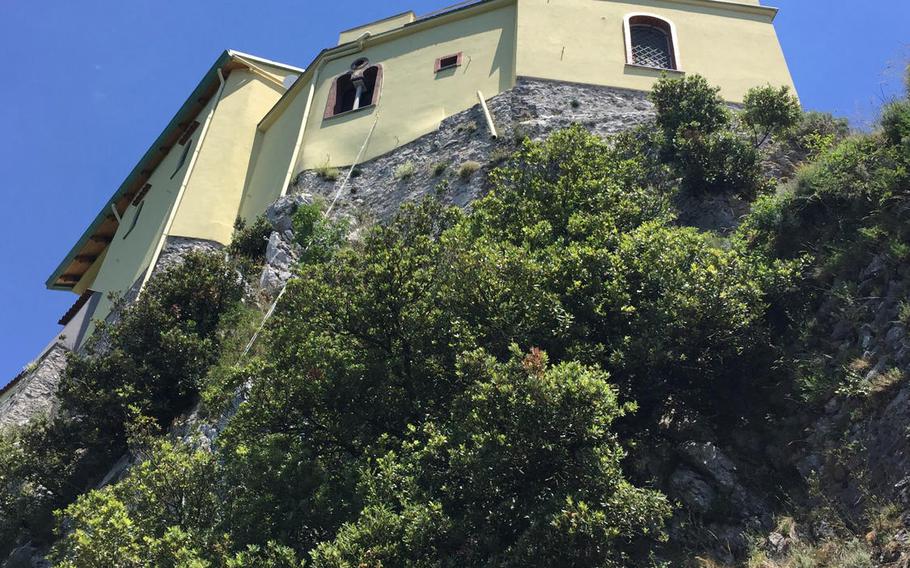 The church at the walled convent of Santuario dell'Avvacata in Maiori, Italy. Built in 1485, the complex stands on an expansive plateau that juts about 2,500 feet above the Mediterranean Sea. (Scott Wyland/Stars and Stripes) 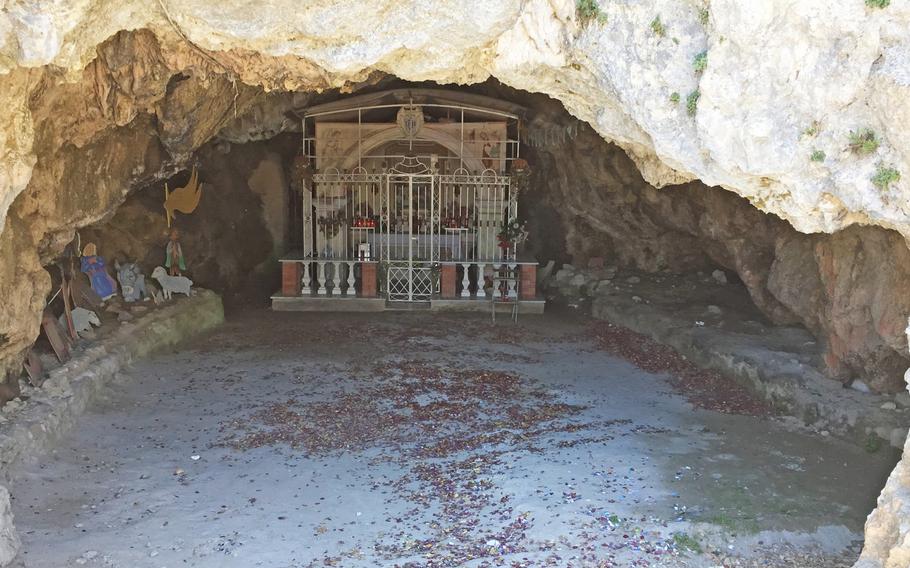 The cave beneath Santuario dell'Avvocata where a 15th century shepherd claimed the Madonna appeared to him while he dozed and inspired him to create the sanctuary. The cave now has a tableau and an altar for conducting ceremonies. (Scott Wyland/Stars and Stripes) 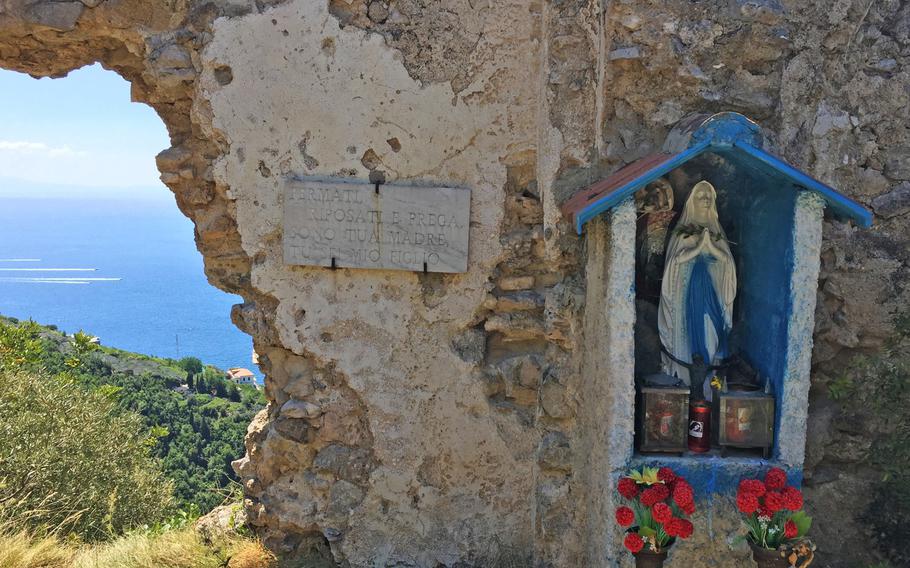 Shrines are set up along the trail to Santuario dell'Avvocata in Maiori, Italy, for the benefit of those who make a religious pilgrimage on the Monday after Pentecost. (Scott Wyland/Stars and Stripes)

Some would say hiking any summit that towers above the boundless blue of the Mediterranean Sea is a spiritual experience. But many make the trek to the Santuario dell’Avvocata in Maiori, Italy, as a religious pilgrimage.

Built in 1485, the sanctuary is made up of a church, walled convent and caretaker’s house that stand on a plateau near the top of Avvocata Mountain on the Amalfi Coast.

From the convent’s lofty vista, the sea spreads out like an azure sheet. Distant boat wakes look like chalk marks on the blue expanse. You can imagine monks coming to the hermitage through the centuries to detach from humanity and feel closer to the heavens.

Every year, devout worshippers trudge up the slopes in droves to the sanctuary for a religious festival held the Monday after Pentecost.

The hike up to the convent is about nine miles long — with roughly 2,500 feet elevation gain. It takes between two and 3 ½ hours to reach the complex, depending on your fitness. Even if you go only part way, you’ll be treated to striking views and vestiges of the ancient world. The payoffs increase the farther you hike and culminate in a breathtaking panorama.

The hike starts at an alley marked by a directional sign. You walk up hundreds of stone stairs that lead to a vineyard before turning into a trail. You pass remnants of Roman aqueducts and see vintners using an ancient cistern to store grape waste.

You encounter religious shrines set up at old ruins. The trail stretches along a ridge that overlooks the sea and takes you past a grotto where, according to a local legend, a bandit named Matteo Salese hurled himself over a cliff rather than let police capture him.

The path becomes fairly steep switchbacks that wind uphill through wooded areas until you reach the sanctuary. Beneath the convent, you can visit the cave where, according to legend, the Madonna appeared to a dozing shepherd, inspiring him to create the sanctuary.

I was disheartened to see trash littering the grounds and bags full of garbage thrown in a heaping pile. Then I learned the big Pentecostal festival had happened just days before and the caretaker was still cleaning up. My faith in humanity was restored.

Trek to the Santuario dell’AvvocataDIRECTIONS To get to the trailhead, go a few hundred yards down via Nuova Provinciale Chiunzi away from Amalfi Drive in Maiori. Look for sign on the right that points you to Santuario Dell’Avvocata. Take stairs and follow directional signs to the stairway going up the mountain. There are no trail markers or cairns, but orange dots are spray-painted on rocks along the route. If you don’t see an orange dot for a while, you’re probably on the wrong path.

TIMES Try to get an early start during the hotter months and take at least 3 liters of water with you.

COSTS No charge for the hike. Maiori has parking garages at a reasonable cost near the beach.