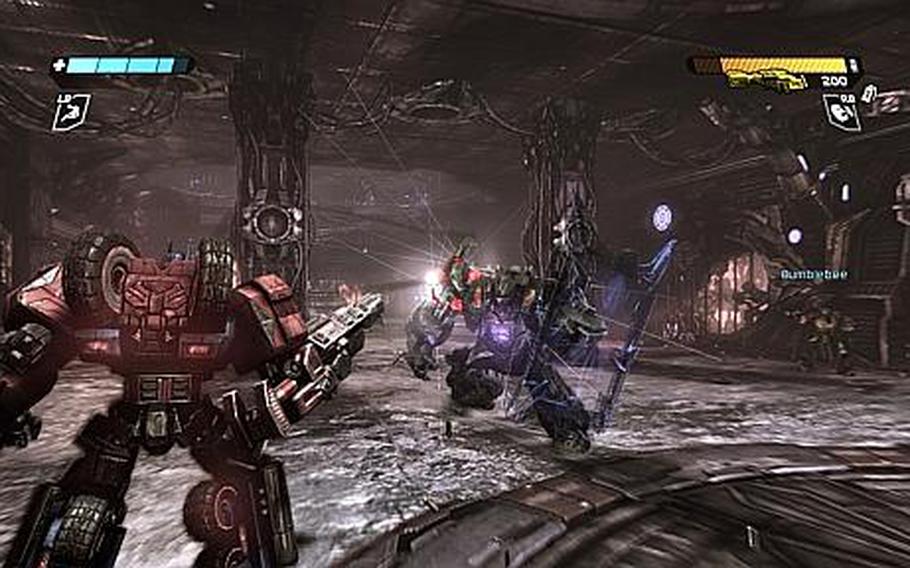 “Transformers: War for Cybertron” lets you play as Optimus and many of the other fan favorites. (Activision)

It turns out that the Transformers don’t really need Megan Fox to be successful.

The sultry actress helped propel last year’s “Transformers: Revenge of the Fallen” to box-office success. This year, the video “Transformers: War for Cybertron” doesn’t include Fox — or any other humans — but delivers plenty of action and fun.

The T-rated third-person shooter from Activision and Hasbro is set long before the Autobots and Decepticons ever arrived on Earth. The two factions of giant robots are waging a devastating war for control of their home planet Cybertron.

You start the game as one of villainous Decepticons and spend the first five missions pounding the Autobots into scrap metal. Then, you switch sides to complete the game among the Autobots.

Before each mission, you select a character to play. Each has his own weapons and special attributes, such as the ability to heal friends, sap energy from foes or go berserk in a melee attack. And since this is a Transformers game, each character can change into a vehicle of some sort, allowing greater speed or flight.

Virtually all of the missions involve a lot of running and gunning. However, enough new challenges pop up in each mission to keep things entertaining. The action and story are very linear. Basically, the pace is so fast and furious that there’s little time for exploring and none for side missions.

The graphics look good — though it really is much easier to render angular metallic warriors than it is to create realistic human faces and fabric.

The artificial intelligence can be a bit spotty. At times, allies seem to be amazing marksmen but their performance isn’t so hot much of the time. The same goes for enemy AI.

The controls are laid out well and work very smoothly. I especially enjoyed the flight controls because they were very forgiving.

You can play through the campaign cooperatively with one or two friends online. They can jump in or drop out at any time during the course of the action. Of course this highlights the game’s biggest flaw: the lack of split-screen co-op. This is definitely a game that would be fun to play side-by-side with a friend.

Multiplayer options extend to a variety of competitive modes, ranging from the standard death match options to the excellent Escalation mode, in which you battle waves of AI opponents. Before jumping into the fight, you can design your own Transformer character, a cool bonus for longtime fans. You don’t have many options for their appearance but you can customize their weapons and abilities quite a bit.

Overall, “Transformers” offers a lot of fun — with the added bonus that you don’t have to put up with Shia LaBeouf.