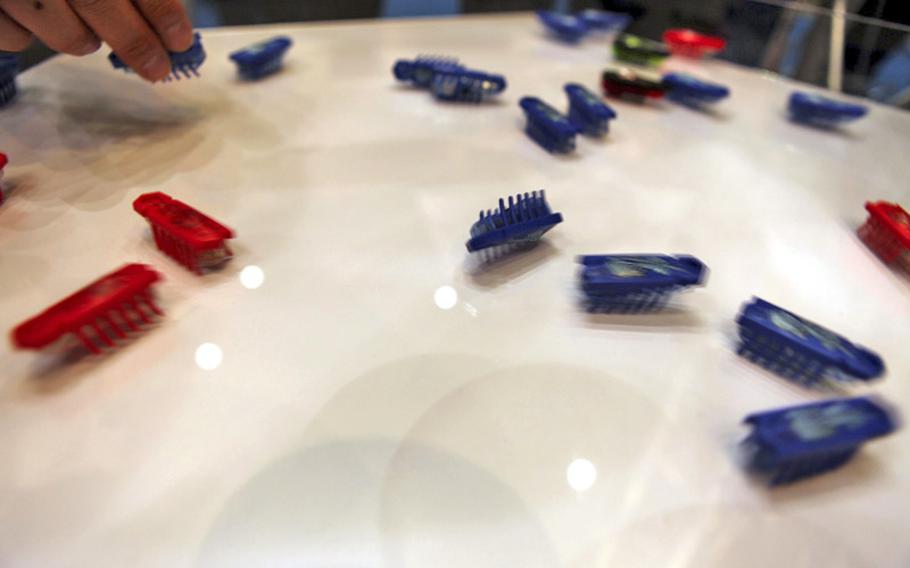 The Hex Bug Nano includes microbiotic creatures that behave and even look like real bugs. They come in various colors and in larger numbers are quite a scary-looking swarm. (Grant Okubo/Stars and Stripes)

The Hex Bug Nano includes microbiotic creatures that behave and even look like real bugs. They come in various colors and in larger numbers are quite a scary-looking swarm. (Grant Okubo/Stars and Stripes) 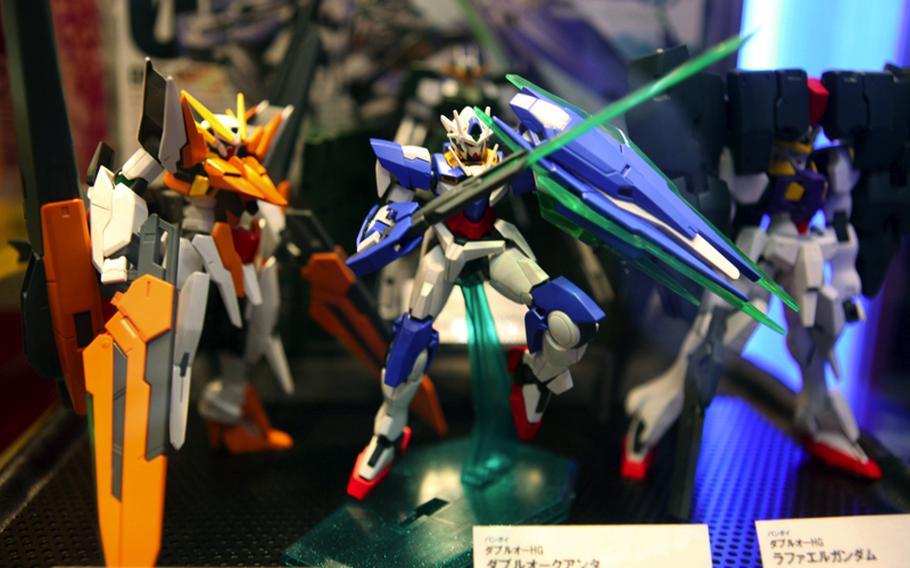 The High Grade Gundam Figures were among the toys at the International Tokyo Toy Show. These ready-to-make models include pre-colored pieces that easily snap together. (Grant Okubo/Stars and Stripes) 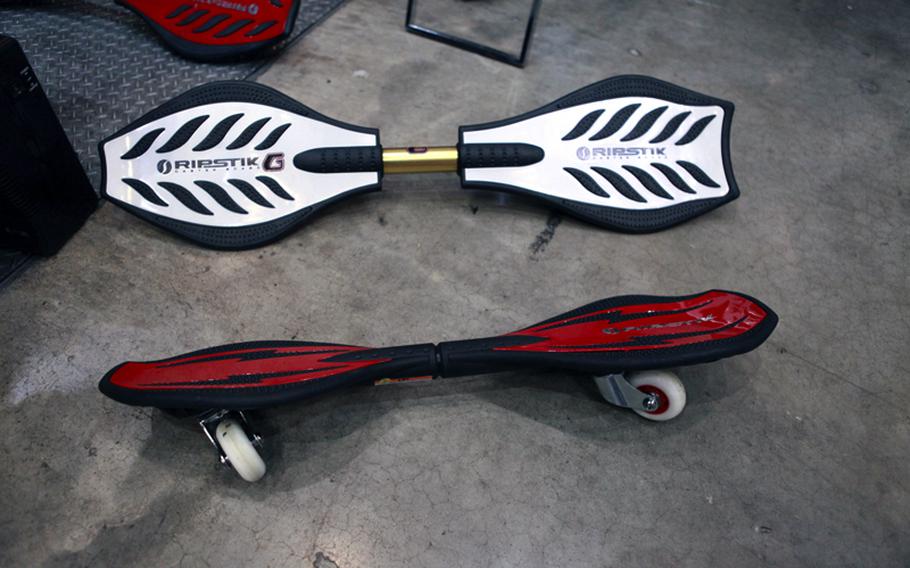 The Ripstick, seen at the International Tokyo Toy Show, is a cross between a snowboard and a skateboard. (Grant Okubo/Stars and Stripes) 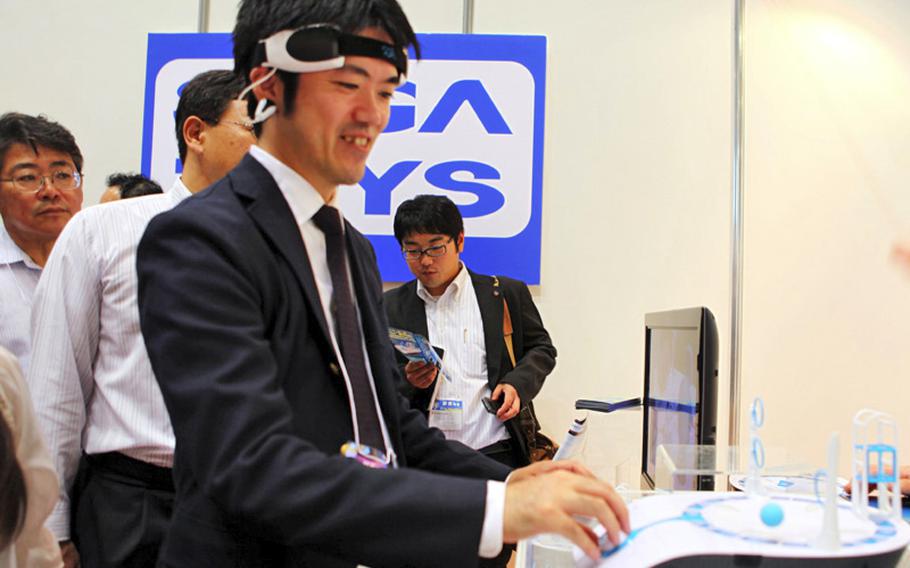 The Mindflex, as seen at the Tokyo Toy Show, is a device that allows you to move a ball with the power of your mind. (Grant Okubo/Stars and Stripes) 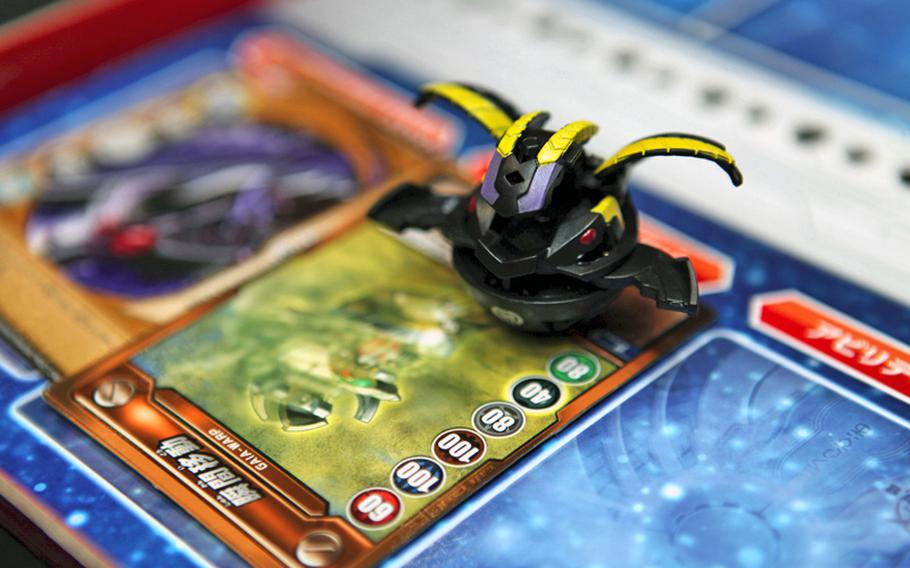 Bakugan Battle Brawlers is a card- and toy-based game that involves Bakugan, small spheres that pop open into powerful Bakugan monsters when rolled onto special metal gate cards. The object of the game is to capture three gate cards. (Grant Okubo/Stars and Stripes) 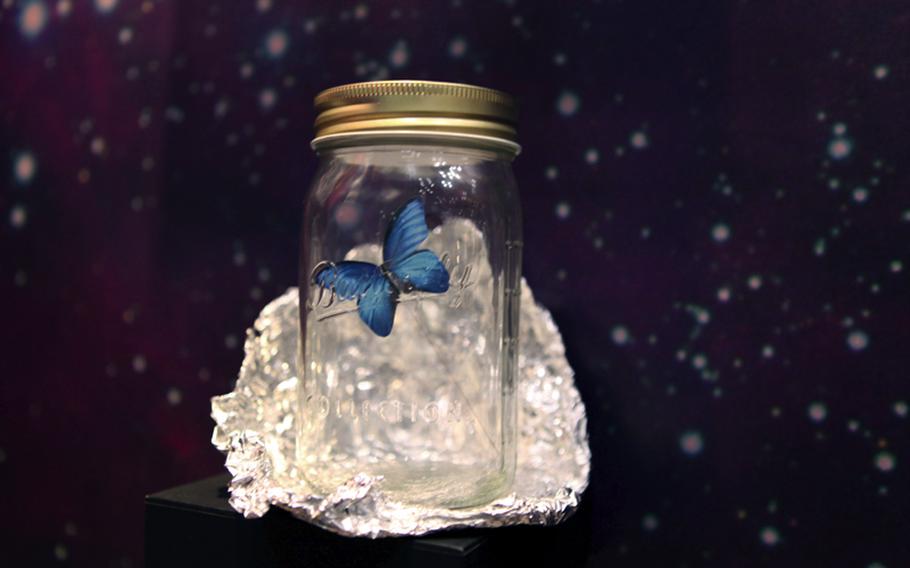 The Chouchou is a fake butterfly in a jar that is so lifelike you might not be able to tell it from the real thing. Tapping the jar prompts it to flutter around. (Grant Okubo/Stars and Stripes) 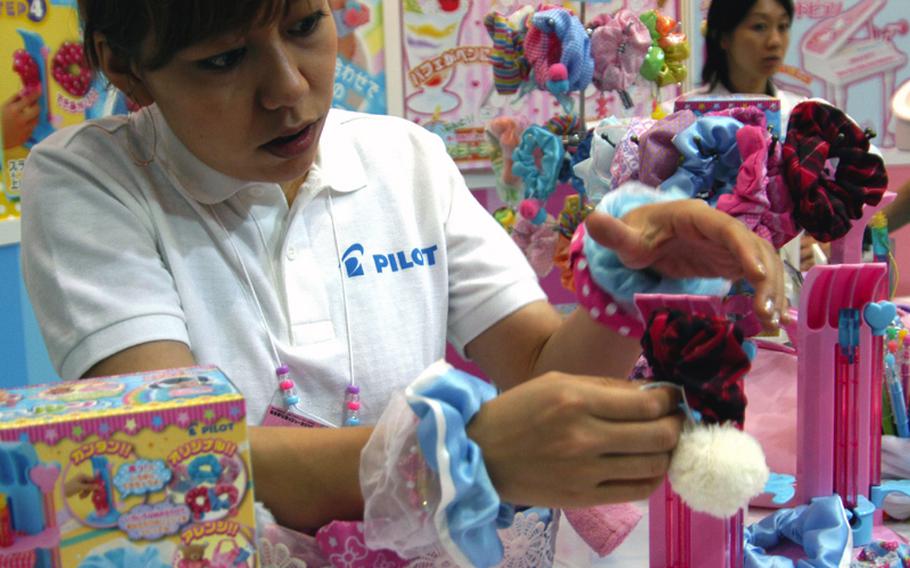 Shu Shu Run, as seen at the Tokyo Toy Show, is a scrunchy maker that uses no needles or threads. (Hana Kusumoto/Stars and Stripes) 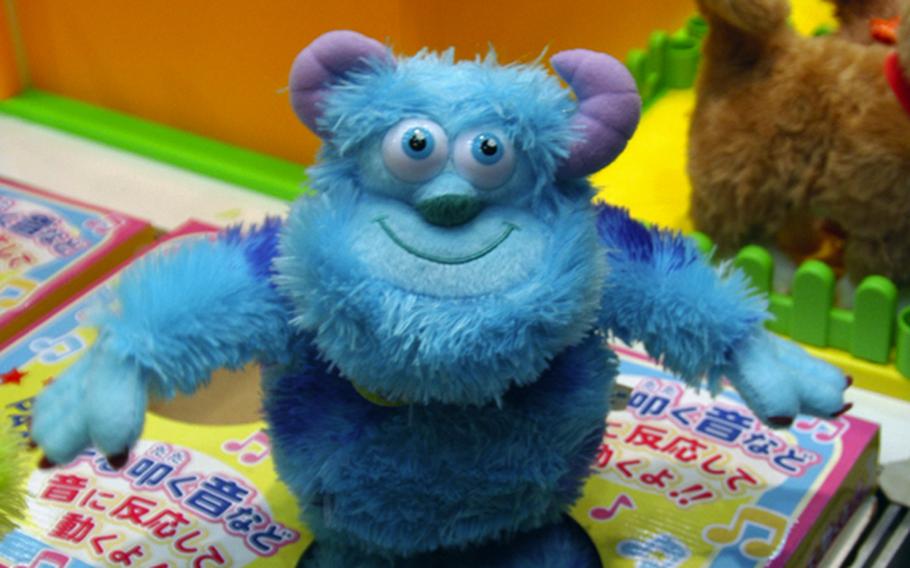 The Dancing Series Sulley doll, based on a character from the movie Monsters, Inc., wiggles its hips and dances to music or any kind of sound. The doll also plays three different songs of its own that it dances to. (Hana Kusumoto/Stars and Stripes) 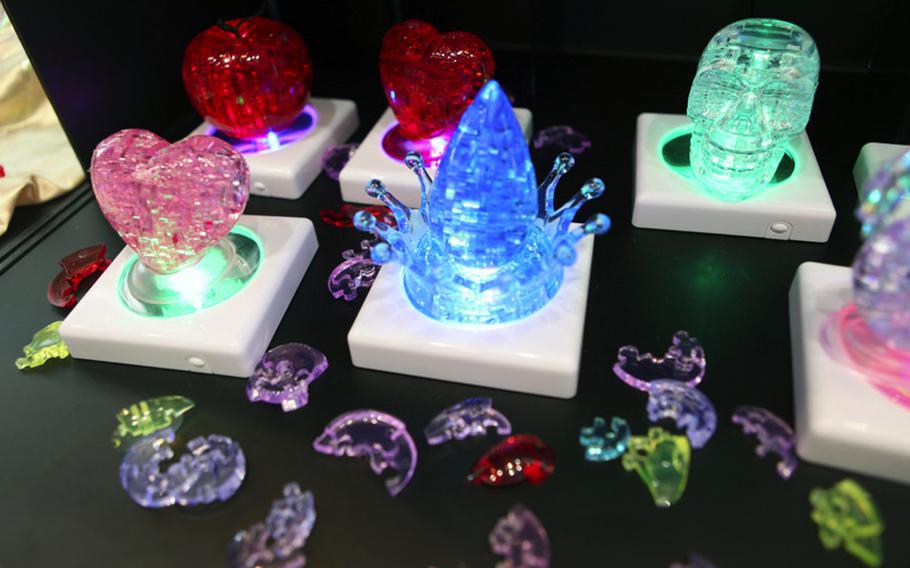 Crystal Puzzles are clear, three-dimensional puzzles that, when put together, can make for a nice display. (Grant Okubo/Stars and Stripes) 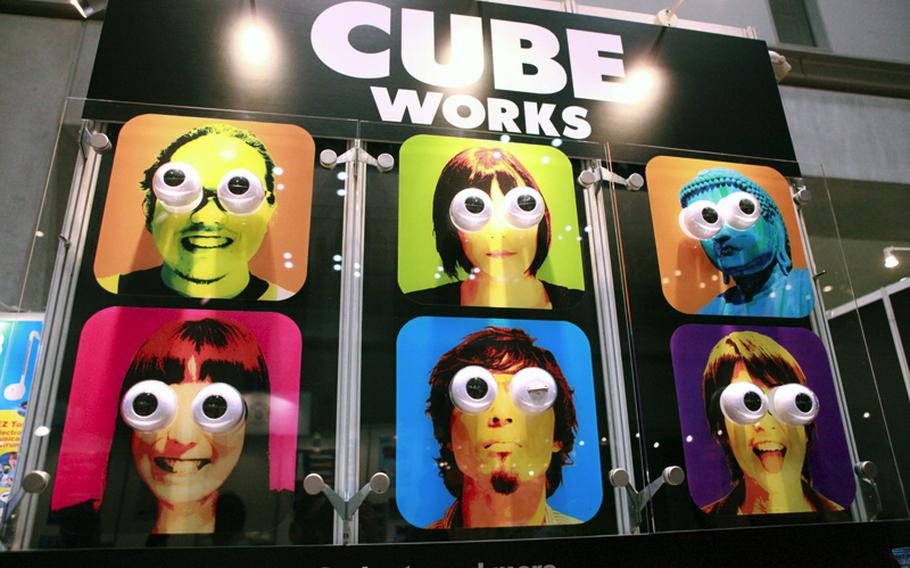 Nikodama, presented here at the Tokyo Toy Show, are sticky, blinking eyeballs that give expressions to any household items. Just attach them to any smooth surface, and the objects look like they are alive. (Grant Okubo/Stars and Stripes) 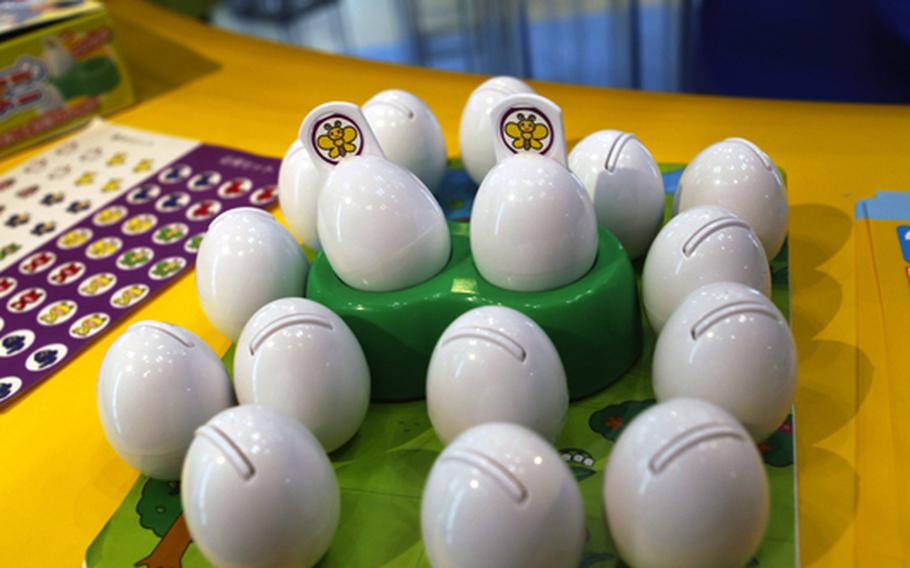 Memory Tamago is a game similar to 'Concentration,' played with toy eggs. (Grant Okubo/Stars and Stripes) 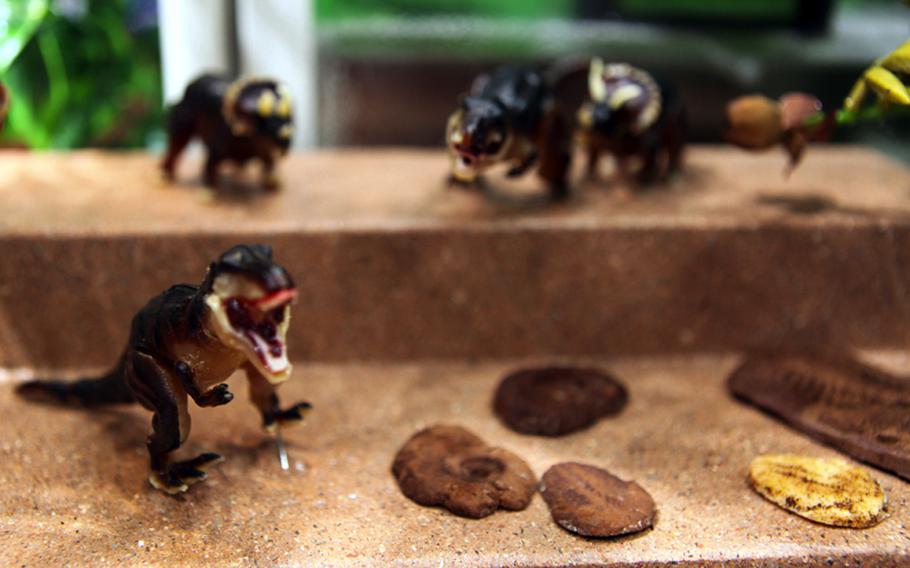 Gummi X is a cooking toy for boys that makes edible gummi bugs and dinosaurs by pouring juice and gelatin mix into a tray and cooling it in a refrigerator for 15 minutes. (Grant Okubo/Stars and Stripes)

From a pet bunny toy that runs around twitching its nose to a toy figure that bears a striking resemblance to Michael Jackson, the 49th annual International Tokyo Toy Show held last month showcased thousands of toys for little kids and big kids too. More than 150,000 visitors got to check out more than 36,000 toys at Tokyo Big Site during the event&rsquo;s four days. In all, 139 domestic and overseas toy companies were represented. Many of the toys at this year&rsquo;s show weren&rsquo;t just for children but for parents to enjoy as well. One of the show&rsquo;s themes, according to a Japan Toy Association news release, was &ldquo;parents and children having fun together.&rdquo;True to form, boys and their fathers tried their hands at such toys as hyper Yo-Yo and radio-controlled cars. Meanwhile, cooking toys had mothers and daughters cooking and tasting together.Besides toys, character shows also drew in big crowds at the event. Many fathers hoisted their children up onto their shoulders so they could watch the shows amidst the sea of people. &ldquo;My daughter really enjoyed the performances of the Sugarbunnies and Heart Catch Precure,&rdquo; said U.S. Navy Lt. Tom Murphy from Yokosuka Naval Base, who came with his wife, Amanda, their 4-year-old daughter, Adelaide, and their 5-month-old baby. &ldquo;The characters here are different, but I think the kids [here] enjoy toys just as much as they do in the States,&rdquo; Murphy said.Stars and Stripes reporter Grant Okubo contributed to this report.

Toys that caught our interestRipstikcompany: Razor, Vitamin i Factory in Japantarget age: 8 and update available: In stores nowprice: 15,800-18,880 yen ($180-$215)description: It&rsquo;s a cross between a snowboard and a skateboard. The Ripstik is perfect for kids looking for a new type of thrill or even older riders looking to join them. Instead of the conventional four wheels, the Ripstik has only two. It features a pivoting deck and 360-degree inclined caster trucks, which give it its signature maneuverability. &mdash; Grant Okubo

Hex Bug Nanocompany: Innovation First Lab, Takara Tomy A.R.T.S in Japantarget age: 6 and update available: In stores nowprice: 924 yen ($11) description: A micro-biotic creature that behaves and even looks like a real bug. They come in various colors and in larger numbers are quite a scary-looking swarm. This unpredictable robot uses vibration to propel itself in different directions. &mdash; Grant Okubo

High Grade Gundam Figurescompany: Bandai price: 1,600-2,100 yen ($18-$24)date available: September target age: 5 and updescription: The pieces for this High Grade Gundam model kit are pre-colored and easily snap together. The models are made by Ban Dai Japan so the instructions will be in Japanese, but they have very clear numbered photos that are easy to follow. There is no glue or paint required to build these models. These models come with movable parts and accessories. &mdash; Grant Okubo

Memory Tamagomanufacturer: Kumontarget age: 3 and update available: Early Octoberprice: 2,940 yen (about $34)description: This educational toy helps build children&rsquo;s memories and concentration. It is played like the game &ldquo;Concentration.&rdquo; When tamago (eggs in Japanese) are placed on the green egg holders, pictures pop up. Players try to match up the pictures. &mdash; Hana Kusumoto

Mindflexcompany: Mattel, Sega Toys in Japantarget age: 15 and update available: In stores nowprice: 12,600 yen ($142)description: Mindflex is a device that allows you to move a ball with the power of your mind. Mindflex reads the intensity of your brainwaves via sensors positioned on your forehead and ears. Once the Mindflex headset recognizes your brainwaves, it transmits a signal to a fan within the console. This fan controls ball levitation. Your brainwaves, in turn, control the power of the fan. The more effectively you concentrate, the stronger the fan blows, and the higher the ball floats. &mdash; Grant Okubo