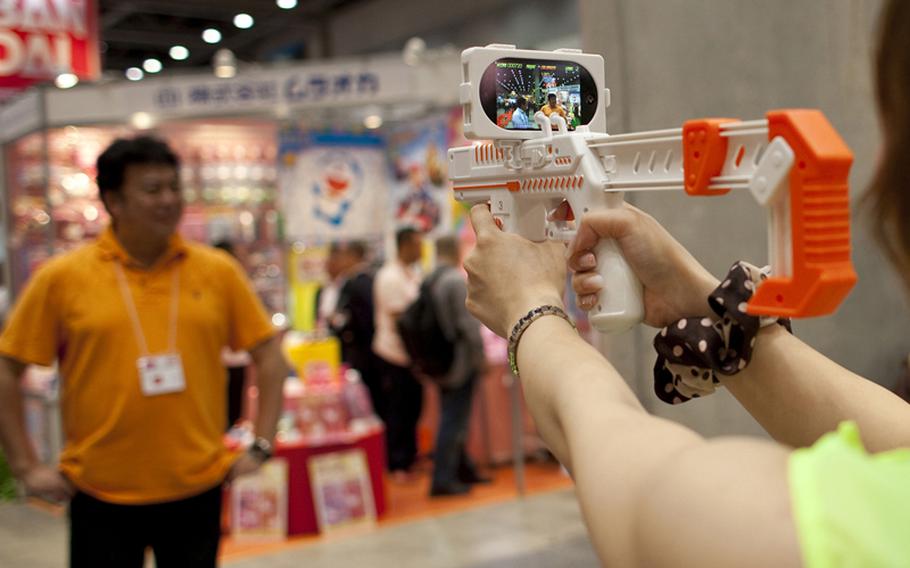 Buy Photo
This augmented reality toy gun — WIZ inc. appBlaster — uses your iPhone’s or iPod Touch’s ability to take video and turns it into a monster zapping game. Download the application, set your device on the gun, and play. Set to be released in September, it will cost about $35. (Nathan A. Bailey/Stars and Stripes)

Buy Photo
This augmented reality toy gun — WIZ inc. appBlaster — uses your iPhone’s or iPod Touch’s ability to take video and turns it into a monster zapping game. Download the application, set your device on the gun, and play. Set to be released in September, it will cost about $35. (Nathan A. Bailey/Stars and Stripes) 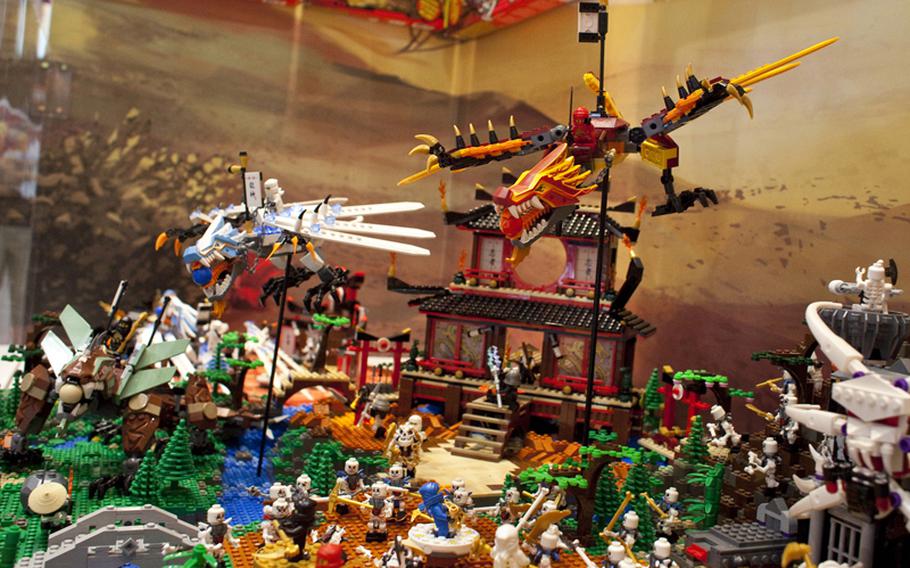 Buy Photo
New for 2011 are LEGO’s Ninjago sets. There are swords, nunchucks, dragons and ghosts galore in the 14 sets, and other games where you battle other ninjas on spinning platforms. They run $15 to $200, and while some sets are available now, most come out in July. (Nathan A. Bailey/Stars and Stripes) 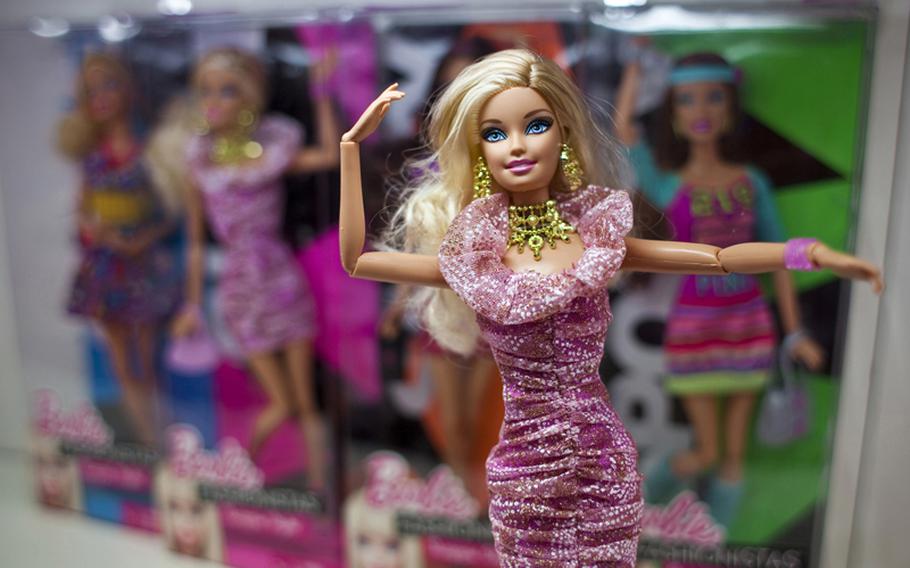 Buy Photo
Mattel's Barbie Fashionistas have broken the mold and can now bend arms, legs, and wrists, allowing you to pose her in new fashionable ways. i. Cost: About $25 ii. Release: Available now, but new Fashionistas come out each season. (Nathan A. Bailey/Stars and Stripes) 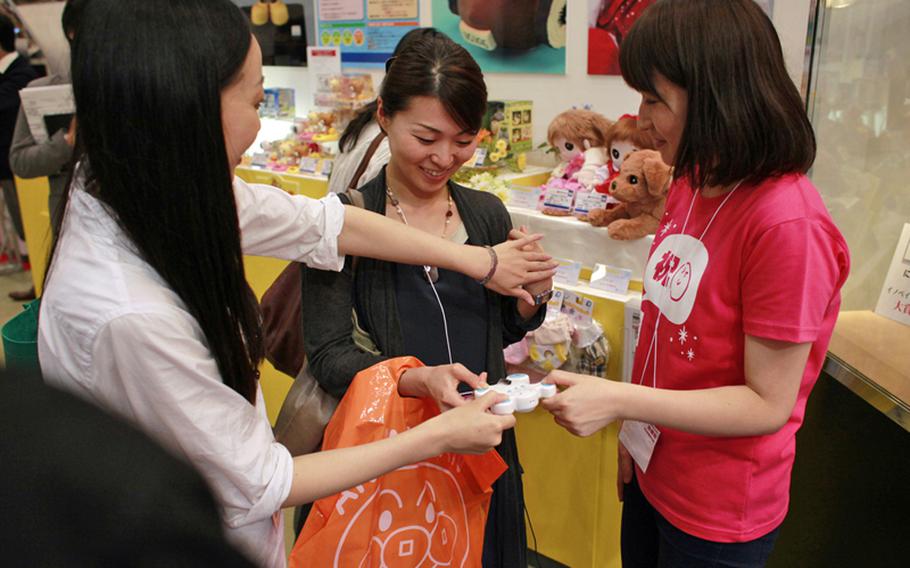 Buy Photo
Nathan Bailey/Stars and Stripes The Takara TOMY A.R.T.S Human Instrument uses low-frequency electric pulses to make you and your friends musical instruments. Create tones, beat and sounds with touch. The toy comes programmed with 10 songs, 30 animal sounds and 4 beats. It will cost about $45 and was released June 30. (Nathan A. Bailey/Stars and Stripes) 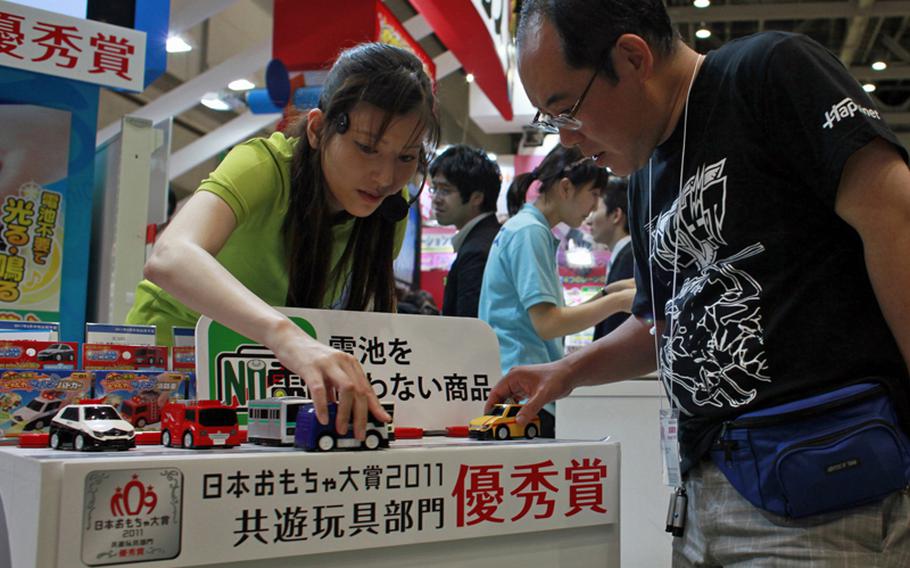 Buy Photo
MegaHouse Corporation’s Ecolo are eco-friendly toy cars available in six models including a fire engine, a taxi cab and a garbage truck. They emit noise and light up when you move them, but don’t use batteries. They cost about $20 and will be released in September. Nathan Bailey/Stars and Stripes (Nathan A. Bailey/Stars and Stripes) 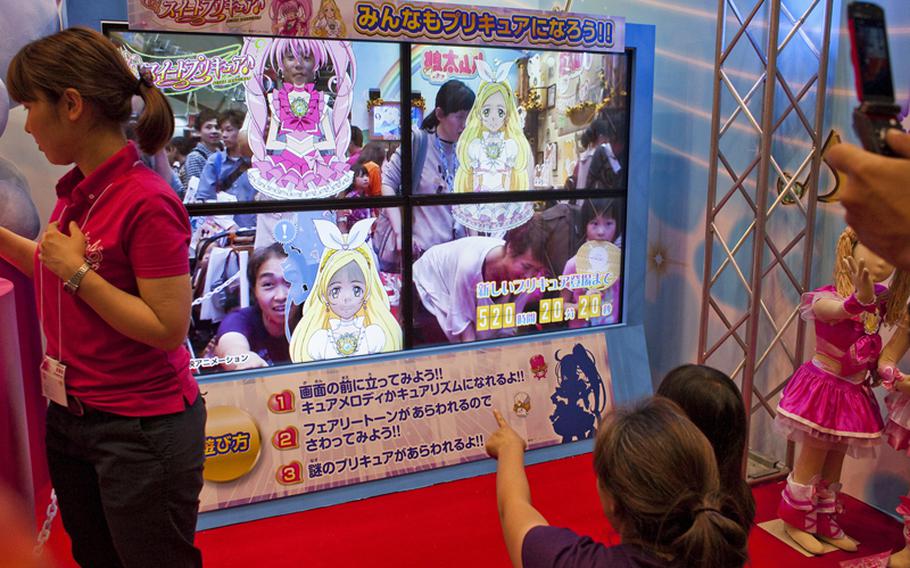 Buy Photo
Massive TV screens project live footage of people walking through an exhibit and projected girly, anime-style clothing onto their bodies at the 2011 Tokyo International Toy Show. (Nathan A. Bailey/Stars and Stripes) 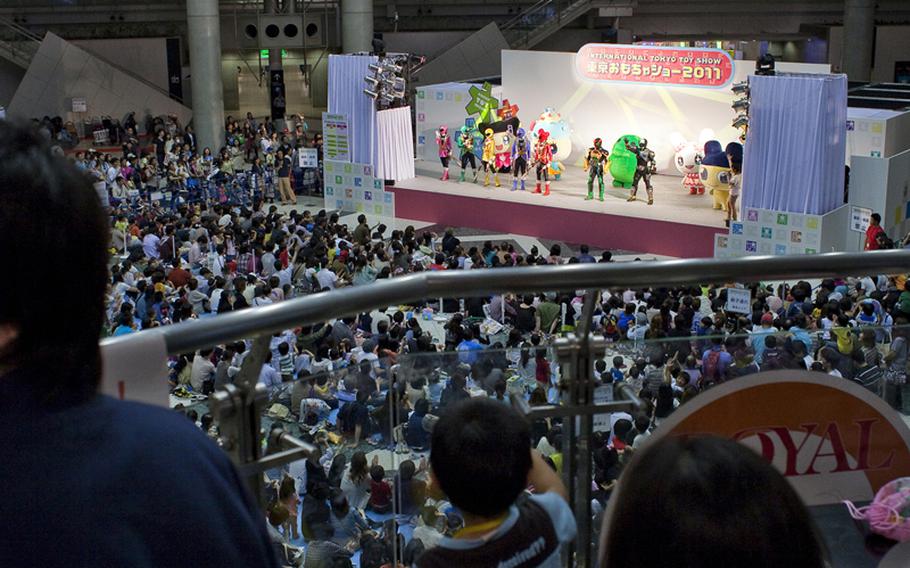 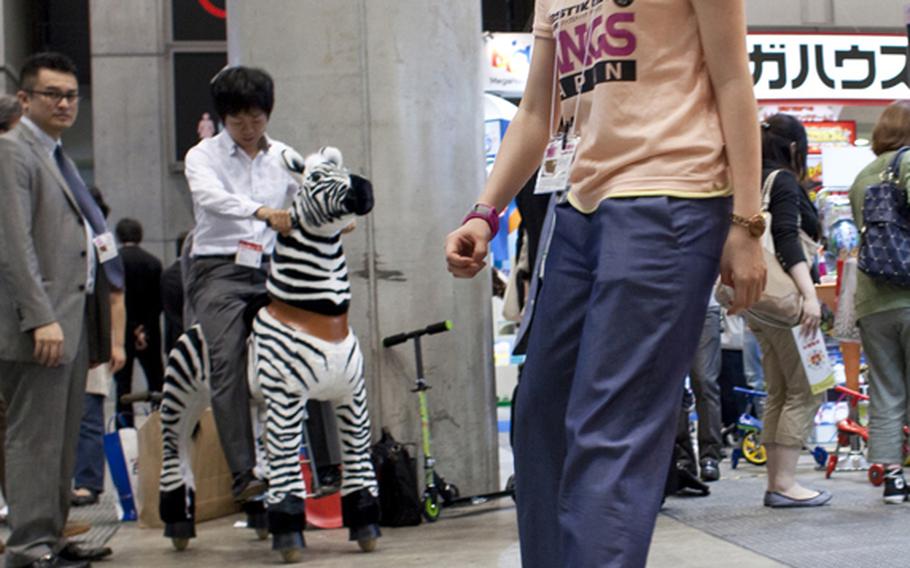 Buy Photo
A worker with Rangs Japan rides a Ripstik, a skateboard-like toy with rollerblade wheels at the toy show on June 16. (Nathan A. Bailey/Stars and Stripes) 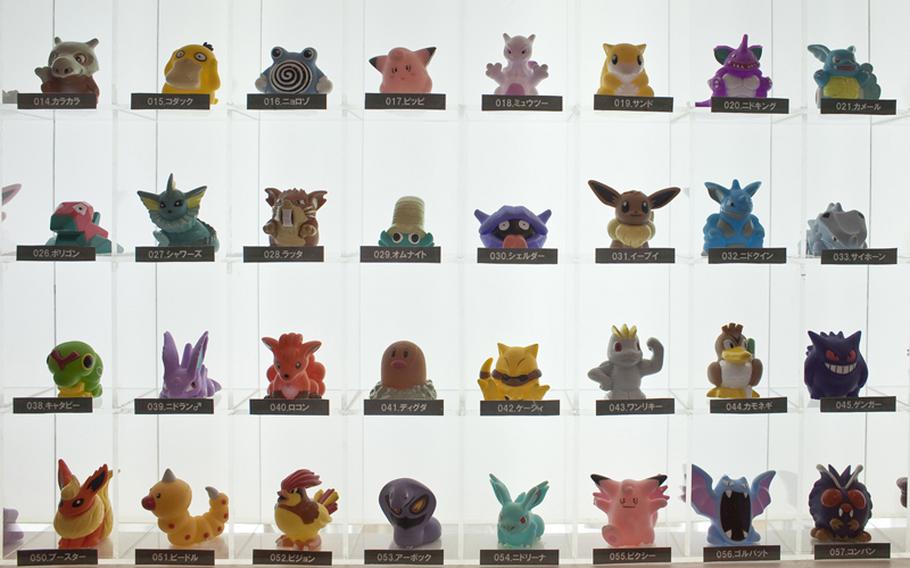 The folks at LEGO had spared no expense; this display was legit. A LEGO police officer in a life preserver and cap stood at the helm of the ship cutting through the LEGO water while another sailor walked along the bow. A bank robber on his personal watercraft was attempting an escape.

&ldquo;I haven&rsquo;t shown him the sales area yet,&rdquo; said Noriko out of Takota&rsquo;s hearing. &ldquo;I kept telling him they aren&rsquo;t selling them yet.&rdquo;

Whether all the parents at the 2011 Tokyo International Toy Show had to resort to subterfuge was debatable, but it was clear that everyone &mdash; young and old &mdash; had their eye on something at Japan&rsquo;s largest annual toy show.

Tokyo Big Sight played host to the more than 35,000 toys from 132 domestic and international companies that included the heavy hitters Bandai, Sony, Epoch, LEGO and others.

The show featured the ingenious, bizarre and funny including toy ponies for adults, an erupting bubble bath, and an instrument you play by touching your friends.

The theme was eco-friendly toys. Some companies tried to cheat by calling board games, puzzles or wooden blocks eco-friendly &mdash; because they didn&rsquo;t require batteries or consume energy &mdash; but two toys in particular were able to achieve high-tech function while maintaining their eco-friendliness.

One of these was Mega House Corporation&rsquo;s Ecolo. Despite the lack of creativity used in naming the toy, the company showed they can make eco-fun as the cars, which come in six models from fire engines to taxi cabs, can light up and make noise without the use of batteries.

One toddler, Yuki, who had been playing with the garbage truck Ecolo for about 10 minutes didn&rsquo;t seem to care that the toy touted energy savings, but it was something that his father noticed.

&ldquo;The fact that the toy doesn&rsquo;t need batteries is a factor I considered,&rdquo; said Takuya Nasu, who said he was planning on buying the toy for his son.

Another eco-toy was a bigger hit with adults than it was with children.

Rangs Japan, a company that started selling boomerangs from Australia in 1987, has expanded into a company that makes all types of active toys including the Eco Pony.

Yes, a pony (they also have a zebra version) that adults can ride around, and which functions without any batteries or external power source but is propelled by the riders arm and leg movements. You can even move the head to steer.

Rangs Japan President Miki Kobayashi came up with the idea for the toy.

&ldquo;I thought it could have been a chair, but if it were to move, that would be fun,&rdquo; said Kobayashi.

But adult toys have adult price tags, and at about $1,100 with the current exchange rate, the novelty might not be enough to make some take the plunge.

&ldquo;It was a lot of fun, and something I didn&rsquo;t expect, but 88,000 yen is too expensive,&rdquo; said Keiko Matsushita, after he rode the pony.

Several toy-themed live performances took place on a stages set up through out the sprawling Big Sight complex.

One was called &ldquo;Licca-chan&rsquo;s Fantasy Show with Bubbles,&rdquo; which despite its heady moniker, was little more than a giant doll with bubbles a la Lawrence Welk.

Misaki Asano, a 5-year-old who had just watched the headlining Power Rangers perform on the main stage, sat quietly resting with her mother, Maki, and grandmother, Miwako.

Maki said her daughter wanted to come to the show to see Licca-chan, the doe-eyed dress-up doll that is similar to America&rsquo;s Barbie. She had found a toy she wanted, the Licca-chan Pet Shop, but couldn&rsquo;t find anywhere to buy it.

Misaki&rsquo;s grandmother promised that she would take her to buy the toy at a store near their home in Yokohama.