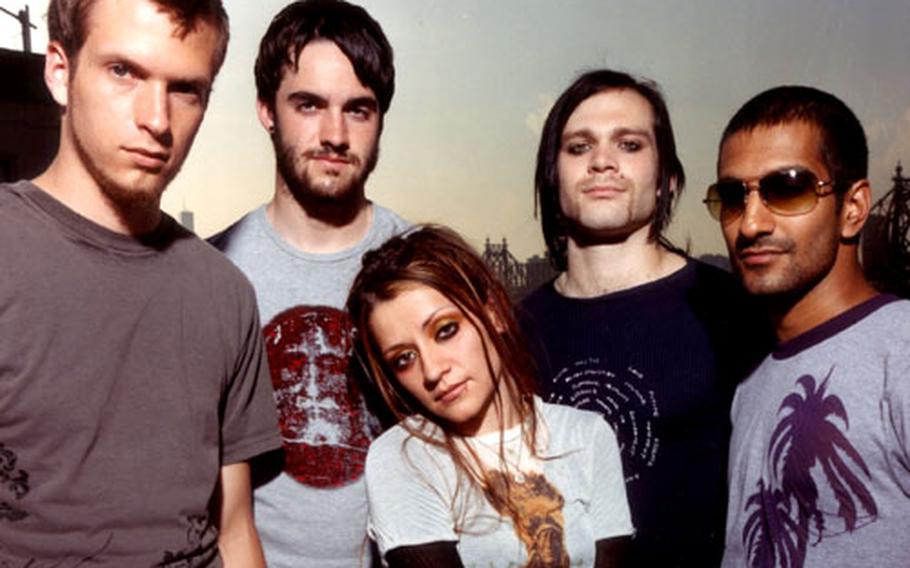 Flyleaf is named for the blank page at the beginning of a book — a place to record thoughts or messages. (Octone Records photo)

Flyleaf delivers both in its self-titled debut. The sharp voice of Lacey Mosley, heavy bass and blazing guitars explore a world that&#8217;s wracked with pain but longs for more.

Mosley knows a lot about wounds &#8212; a very difficult childhood, drugs and plans for suicide, all before a fateful trip to church with her grandmother changed her life. Those early experiences give the band&#8217;s songs authenticity and impact, which undoubtedly explains its out-of-nowhere success. The CD is No. 2 on Billboard&#8217;s Christian sales chart and the powerful &#8220;All Around Me&#8221; is No. 4 on the Christian rock radio chart.

&#8220;Flyleaf&#8221; is definitely not a bright, cheery praise disc. It focuses on deep pain that can only be healed by God.

The CD opens with the rumbling intro to &#8220;I&#8217;m So Sick,&#8221; which suddenly rips into action with powerful guitar licks and growling vocals. The song captures the essence of Flyleaf and its view of life.

However, that&#8217;s no excuse for giving up on life or God, Mosley said, reciting John 3:17, where Jesus said that he had come to save the world, not condemn it.

Mosley&#8217;s conversation is filled with biblical allusions and scripture citations &#8212; and the need to hang onto hope no matter what life throws at you.

The song has become one of the most popular at concerts.

&#8220;It seems like everybody knows that song and they sing it louder than any other song,&#8221; Mosley said.

When asked which of the songs she prefers, Mosley focuses on the future.

A song that might make that disc focuses on U.S. servicemembers. The band is based near Fort Hood, Texas, so &#8220;we have a lot of close friends and fans that are in the military,&#8221; Mosley said.