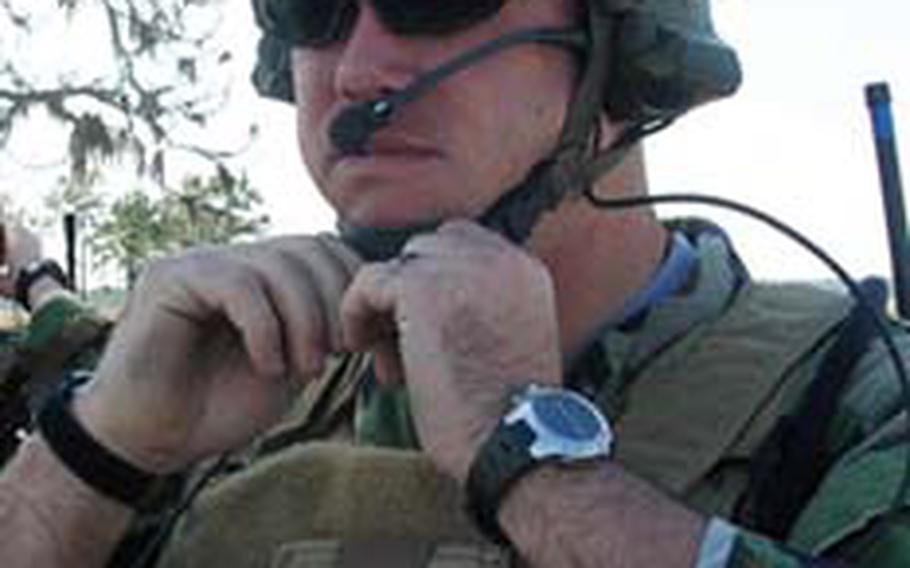 As the sun came up, the firing started.

It was sporadic at first, but as the day progressed it became a full battle that lasted for more than three days.

Roughly 100 U.S. troops were outnumbered and getting hit by enemy tanks and artillery, but Air Force Staff Sgt. Thomas Case was able to call in close air support and push the enemy back.

Now a technical sergeant, Case, 34, was awarded the Silver Star for actions that helped turn the battle.

In late March 2003, Case was a tactical air control party specialist with the Army&#8217;s 75th Ranger Regiment, which was sent to the Haditha dam to make sure the Iraqis did not blow it up to block the advance on Baghdad.

"It just crescendoed from there," he said.

The U.S. troops had bypassed several buildings near the dam, but when the Iraqis inside woke up, they came out shooting.

Case opened fire with his M-4 as the Iraqis came within 30 meters of the U.S. forces.

The Iraqis also began firing mortars at the U.S. troops from an island in the artificial lake created by the dam.

When the Air Force took out the mortar position, the engagement went from a firefight to a full battle.

Case could see a truck loaded with Iraqi troops headed to his position.

He and the other U.S. troops opened fire on it as he called in an airstrike to take it out.

Case called in airstrikes to take out several of the tanks.

At one point, he was directing 14 aircraft to 14 different targets.

As the U.S. troops continued to take mortar fire, Case looked for the forward observer.

A few times, he was able to find the observer and take him out, but the mortar fire would only stop temporarily.

Then the Iraqis called in the big guns &#8212; literally.

The Iraqis started shelling the dam with 152 mm artillery pieces.

Every time an artillery round would hit the dam, the windows in buildings at the bottom of the dam would shatter.

In order to call in airstrikes, Case had to leave cover so that his radio could reach a satellite.

He was hit by shrapnel and chunks of concrete, but the extra radio in his rucksack absorbed the worst of the flying debris.

The U.S. troops were hit by between 300 and 400 artillery rounds in an eight-hour period.

At this point in the war, the coalition still thought Iraq had chemical weapons, so when the Iraqis started firing white phosphorous rounds, Case and the others wondered whether the clouds of smoke might be something worse.

Eventually, coalition aircraft took out the Iraqi artillery, but the Iraqis continued to hit U.S. troops with mortars.

"After you experience artillery rounds, compared to mortar rounds, it&#8217;s kind of like, whatever," he said.

While the battle lasted for about three and a half days, the air support early on proved to be decisive, Case said.

"The only way that fight would have been won was with airpower," he said. "I&#8217;m not taking anything away from my Ranger brothers, they&#8217;re very good at what they do, but a handful of shoulder-fired anti-tank rounds and M-4s is not going to cut it."