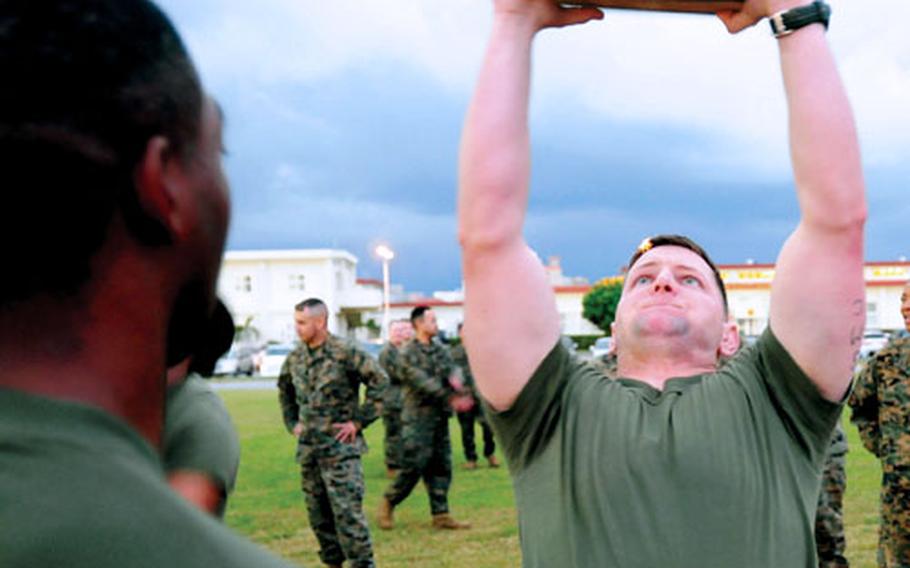 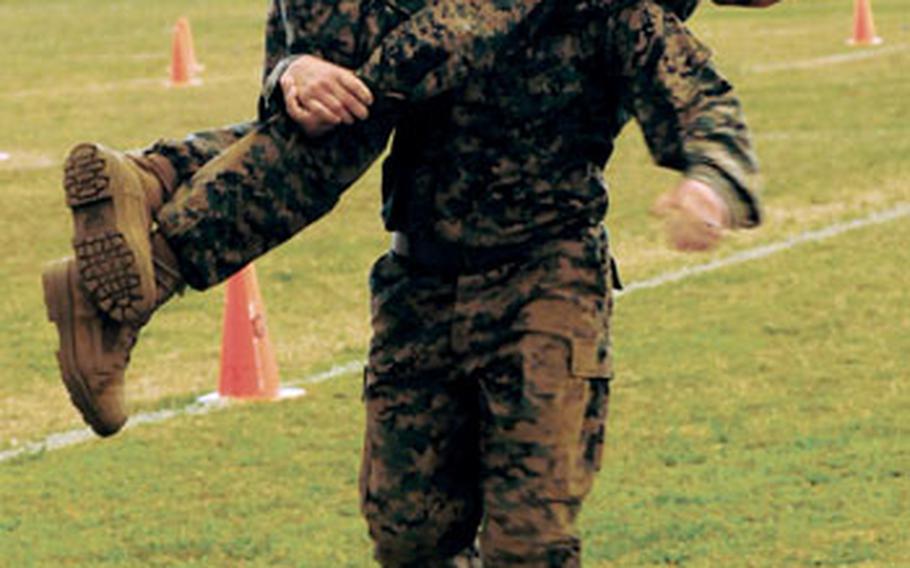 The U.S. Marine Corps is big on physical training and testing.

My Marine Corps career began in 2000, when I stepped onto the legendary yellow footprints at Marine Corps Recruit Depot, Parris Island, S.C. Since then, I&#8217;ve run the Corps&#8217; physical fitness test, or PFT, twice a year.

In December, I had to undergo the CFT. It has more challenges than just crunches and is supposed to replicate the physical trials in the real world scenario of a war zone.

The CFT is comprised of an 880-yard sprint, an ammo-can lift, and a maneuver-under-fire course, which includes a dummy-grenade throw, casualty carry, ammo-can carry, high crawl and low crawl.

The ammo-can lift involves lifting a 30-pound ammunition can at a standing position from the chest and raising it above your head until your arms extend out and then bring it back down to your chest for a count of one.

That test was merely pass or fail. And in my head, I had passed with flying colors.

So, it was with a sense of confidence that I strode onto the combat fitness test field on Camp Foster two weeks ago to take the CFT for score.

With my glow belt securely fastened around my waist, I began the test. I started swiftly and was toward the front of the pack for most of the run.

The test went well &#8212; I thought. My 880-yard sprint was respectable; my ammo-can lift slightly less so, but still good in my mind; and my maneuver under fire was good as well.

And my 35-year-old body held up well compared to my younger counterparts who completed the CFT that morning.

I felt confident that I would receive a first-class score on the CFT. Just like I always have for the PFT.

One week later, when my score was posted, I was snapped back to reality.

There it was in black and white:

I searched online to find a score calculator that would add up my times for each individual event, including those excellent ammo-can lifts. Sure enough, when I entered my times and scores, I came out with 260 points.

I have begun going to a TRX group class at 5 a.m. twice a week. TRX stands for total body resistance training, and it totally kicks my butt. It&#8217;s led by a Marine who looks like he would have no problem getting a perfect score on either fitness test. I&#8217;m also about to undergo a 12-week training regime that is part of the TRX suspension training system I purchased online and am eagerly awaiting in the mail.

The combat fitness testFor years, the physical fitness test has been the determining factor of how fit a Marine is.

But the PFT was criticized by some as not accurately reflecting a Marine&#8217;s combat readiness.

In 2007, the Corps&#8217; Training and Education Command at Quantico, Va., was tasked with developing a physical test that would better gauge a Marine&#8217;s physical conditioning and preparedness for war. Commandant of the Marine Corps Gen. James T. Conway had the combat fitness test unveiled in 2008, but official scoring for Marines didn&#8217;t begin until last year.

The CFT consists of an 880-yard sprint, an ammo-can lift and a maneuver-under-fire course. Each section is scored with a maximum of 100 points possible.

&#8220;The CFT scoring table is designed so that 5 percent of Marines will be able to achieve a perfect score, based on results of the data collection period of CFT development,&#8221; 2nd Lt. Brian Villiard, a spokesman at Marine Corps Base, Quantico, said in an e-mail response to Stars and Stripes.

Starting this year, Marines will take their PFT in the first half of the year and the CFT in the second half, officials said.

&#8220;While in Afghanistan I found myself using functional fitness (moving quickly in short spurts, lifting, moving objects) as often as I used endurance type fitness (extended movements up into the rugged terrain),&#8221; said Lt. Col. Dan Yaroslaski, the commanding officer of Combat Assault Battalion, 3rd Marine Division, on Okinawa. &#8220;The CFT is a challenge for each and every Marine.&#8221;

&#8220;Both events are important,&#8221; said Yaroslaski, who recently returned from the 10-month combat deployment. &#8220;You have to have endurance and the ability to pull yourself up into a building, while you also have to handle combat-related items like ammo cans, hand grenades, conduct buddy drags and fireman&#8217;s carries, all while having the presence of mind to solve problems.&#8221;