‘They needed us and we helped them’ 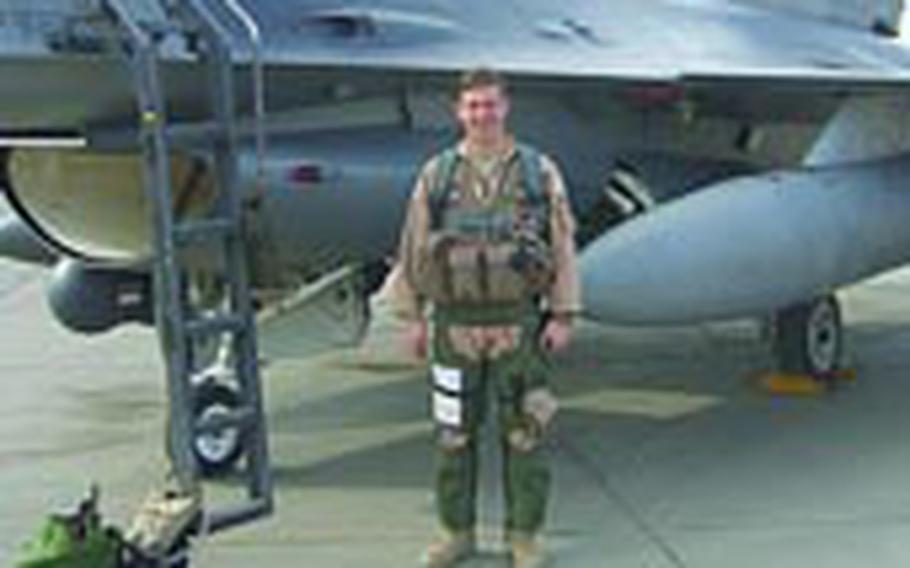 "Red-hot bullets were flying towards the friendlies," is how a pilot flying overhead would later describe the fray.

The Air Force Academy graduate from Peachtree, Ga., rose to the occasion.

"It was one of my biggest thrills in the jet to be able to perform under such high pressure," he said.

For heroism from the cockpit, a dizzying 60 minutes or so that "rocked" the world of suspected insurgents and saved lives of U.S. soldiers, Matwick earned the Distinguished Flying Cross.

But the 28-year-old pilot assigned to Misawa Air Base, Japan, is still getting used to the idea of joining an elite club of DFC medal recipients that includes George H.W. Bush, John McCain, John Glenn, Jimmy Stewart and Curtis LeMay.

He humbly redirects the spotlight on to what he calls a team effort, to his wingman Capt. Brent Ritzke, and "all that went right, all the support structure, all the training."

But his vivid, heart-pounding story speaks for itself.

Matwick and Ritzke, both assigned to Misawa&#8217;s 14th Fighter Squadron, were to provide close air support to a small Army special operations unit near a village south of Baghdad.

The soldiers the two assisted that day were preparing to search a house where a "high-powered meeting" was believed to be happening.

Barely had the pilots been briefed on the mission when the situation turned violent.

People sprinted from the house toward the village and "then the town just erupts as well" with an estimated 200 people, Matwick said.

"It could have been a peaceful rally or these guys were up to no good," he said.

Several clues that it was the latter: "They&#8217;re not going to school at 6:30 in the morning carrying man pads (rockets). I could see they were carrying something and this crowd is all shooting at this convoy we&#8217;re supporting."

The Joint Terminal Air Controller on the ground told the pilots the soldiers were receiving gunfire from men running from the house across a field.

The JTAC saw them duck into another house, this one in the village.

The U.S. soldiers were about 1,000 feet from the house. A less-than-precise bomb could have killed them. The streets were "a beehive" of people. Thick clouds at 10,000 feet made for low, risky flying.

Matwick and the JTAC agreed he would drop a laser-guided 500-pound bomb.

"This is my first laser-guided bomb I had ever dropped in practice or in real life," Matwick said. "It was interesting to see whether this technology was all smoke and mirrors or whether it would actually work."

The house went up in smoke.

Ritzke dropped the next bomb, nailing a truck in a field that had picked up men running from the village after the house was destroyed.

The U.S. soldiers on the ground were still taking fire, now from an open field. The pilots didn&#8217;t see the shooters. Matwick and Ritzke, one after the other, strafed the field, guided to the targets by the JTAC.

Low on fuel, Matwick and Ritzke returned to Balad Air Base, north of Baghdad.

An e-mail the next morning from the JTAC tallied the battle damage. The soldiers found a huge weapons cache in the bombed-out house, in which 40 to 80 suspected insurgents were killed.

It was a sobering aftermath for the pilots, forcing them to deal with complex emotions and tough questions.

Were there women and children in the mix? Did every single person killed want to harm U.S. troops? Did their actions help the American effort in Iraq? Matwick doesn&#8217;t have all the answers. But he was able to resolve any doubts.

"No one was up to good news there. That made it easier," he said. And instead of thinking on such a large scale, he boiled down the mission to this: "These Army troops, they needed us and we helped them &#8230; That made me really proud."