‘They had set up a complex ambush’ 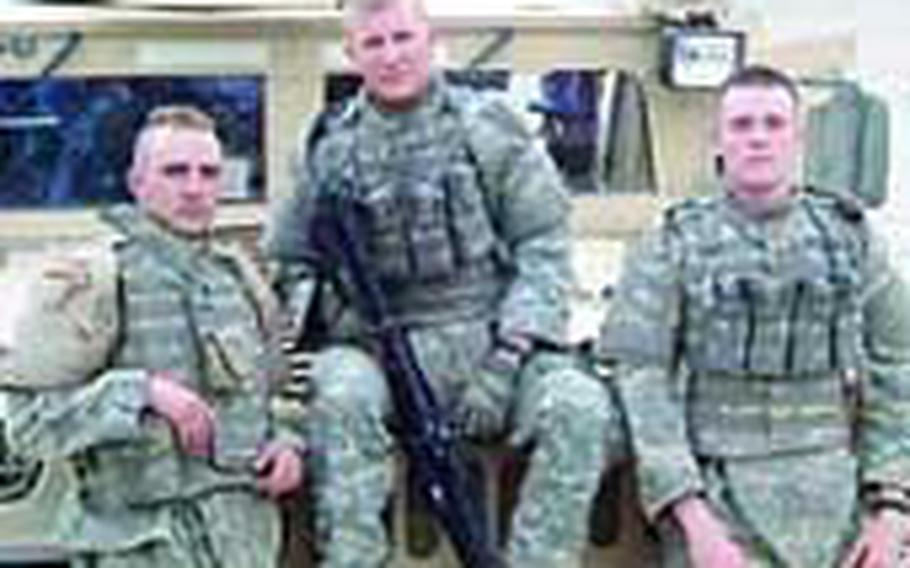 The job that requires soldiers to expect the unexpected.

Inch had just been promoted to sergeant with the 111th Sapper Company, 1st Engineer Battalion, 1st Infantry Division out of Fort Riley, Kan. It was his first mission as a truck commander that day in March when he and his crew rolled out from Forward Operating Base Marez.

His was the last in a convoy of four RG-31s &#8212; mine resistant vehicles used to clear routes in Iraq and Afghanistan &#8212; headed into one of Mosul&#8217;s most dangerous neighborhoods, just outside the gates.

"We called it &#8216;The Gantlet&#8217; because it&#8217;s just a bunch of high, three-four story buildings on each side of a narrow road where we had been ambushed multiple times," said the 24-year-old from Hutchinson, Kan. "Your butthole puckers up when you go through there."

Fifteen minutes into the six-hour mission, "The Gantlet" lived up to its notorious reputation and the empty street erupted with a fiery and piercing blast.

"My platoon sergeant was in front of me and I saw him swerve to the right to go around a big blast hole already in the middle of the road," he said. "That&#8217;s when four homemade propane tank bombs exploded under his truck and threw it 10, 15 feet in the air."

His instincts and training took charge and thrust the young noncommissioned officer into action, which ultimately saved the lives of four soldiers and earned him the Silver Star.

The explosion ripped off the gunner&#8217;s turret and front of the truck, leaving the rest of the mangled vehicle face down in the ground at a 45-degree angle, Inch said.

Instead of waiting for a Buffalo, a heavily armored truck with a robotic arm used to handle roadside bombs, Inch enlisted the help of three Special Forces soldiers who were riding along with him that day to clear the truck.

"When we get blown up, we&#8217;re supposed to wait for the Buffalo. But I knew with the severity of the damage that we needed to do something. I didn&#8217;t know if everybody was dead or how bad they were injured," he said.

As soon as Inch and the men dismounted, a barrage of small-arms fire and rocket-propelled grenades began raining down from what seemed like every direction.

"They had set up a complex ambush on us. They had planned it out and had everything in place so that, once they struck us, they could hit us hard. ... But we didn&#8217;t know that until we got on the ground."

While the remaining 12 troops in the convoy set up a perimeter around the scene and began laying suppressive fire against an estimated 30 insurgents, Inch held the 300-pound door of the disabled vehicle open with his back while the wounded were extracted.

Inch and his partner had only removed two of the men when the attack got so bad they were forced to start fighting back with the other soldiers. Eventually back-up arrived and the unit gained fire superiority, allowing Inch to carry on rescuing the victims from the blown-up truck.

The battle raged for about an hour "but it felt like forever," Inch said.

The wounded soldiers survived though one is now paralyzed, one broke his back and another broke his arm, he said. Inch was credited with seven of the 17 confirmed kills that day. No other serious casualties resulted from the fight.

Inch said he has been involved in at least 20 intense battles similar to the one that day in Mosul.

"It&#8217;s not that you&#8217;re not thinking, but it&#8217;s more reaction. It&#8217;s like muscle memory. You&#8217;re trained to do something so you know how to respond when something happens," said Inch, now assigned to the 65th Engineer Battalion, 25th Infantry Division at Schofield Barracks in Hawaii.

"Don&#8217;t get me wrong, I was very honored. I don&#8217;t want to sound like a jackass. But at the same time I thought my soldiers deserved high awards as well.