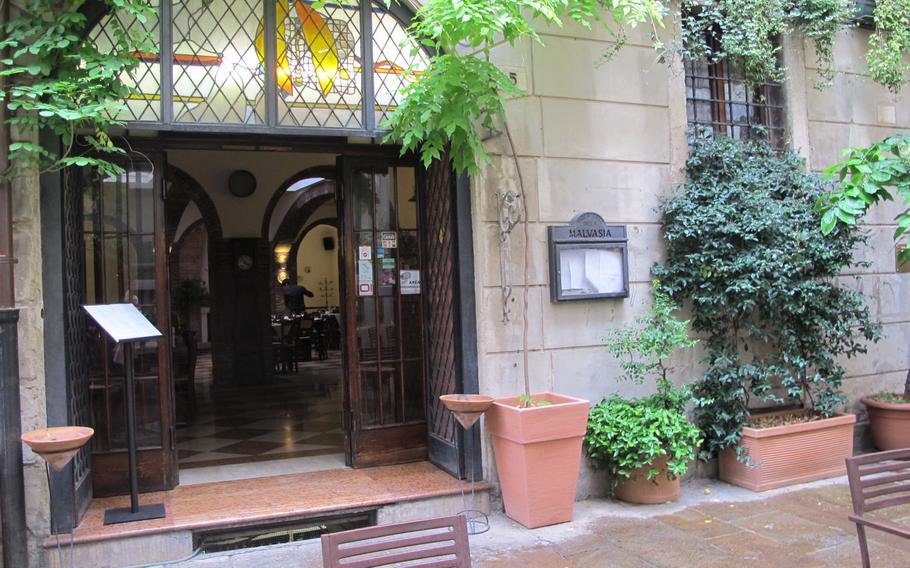 Antica Casa Della Malvasia's entrance is in an alley between the main street in Vicenza, Italy, the Corso Palladio and its main plaza, the Piazza dei Signori. (Nancy Montgomery/Stars and Stripes)

Antica Casa Della Malvasia's entrance is in an alley between the main street in Vicenza, Italy, the Corso Palladio and its main plaza, the Piazza dei Signori. (Nancy Montgomery/Stars and Stripes) 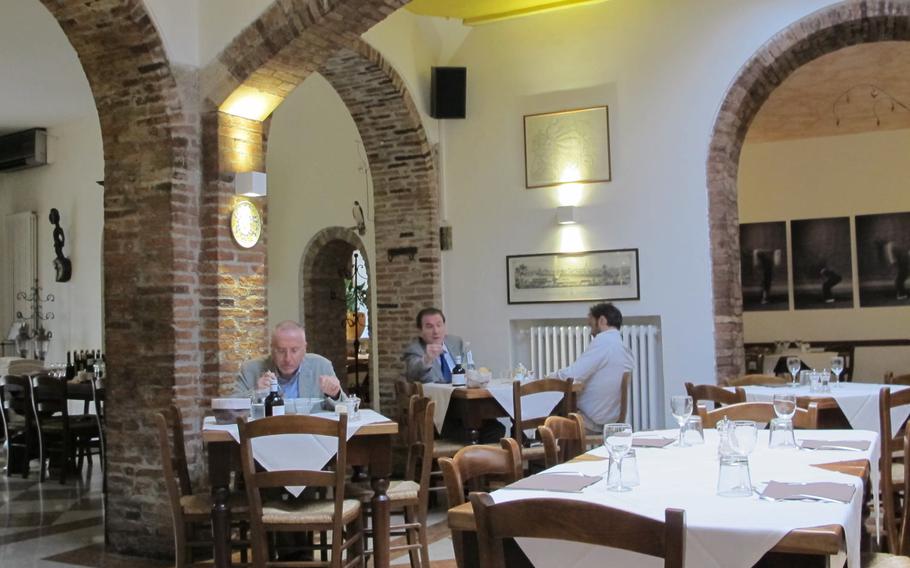 The interior of the Malvasia restaurant is all serene, creamy linens and walls with skylights and wall sconces. (Nancy Montgomery/Stars and Stripes) 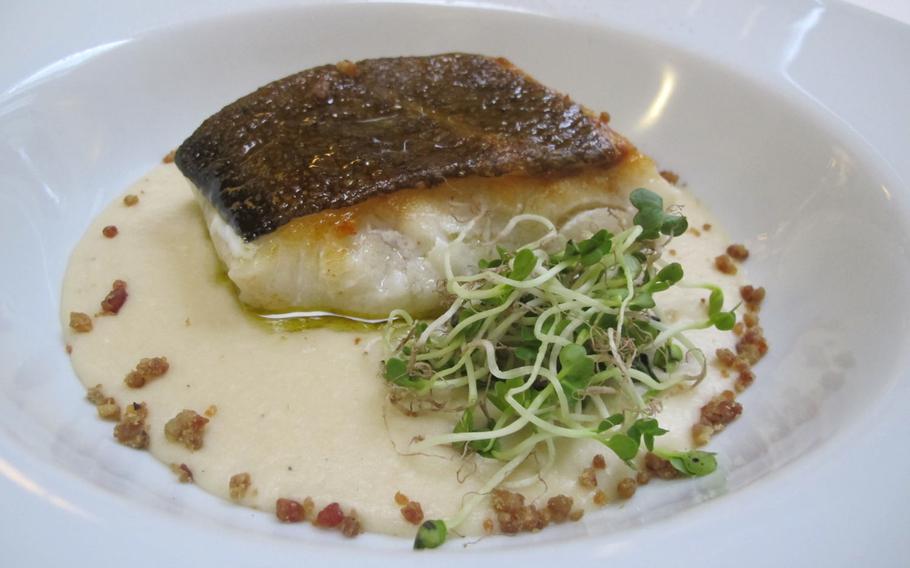 Cod filet with a cream sauce and bacon bits was filling but a little bland at Malvasia restaurant in Vicenza, Italy. (Nancy Montgomery/Stars and Stripes) 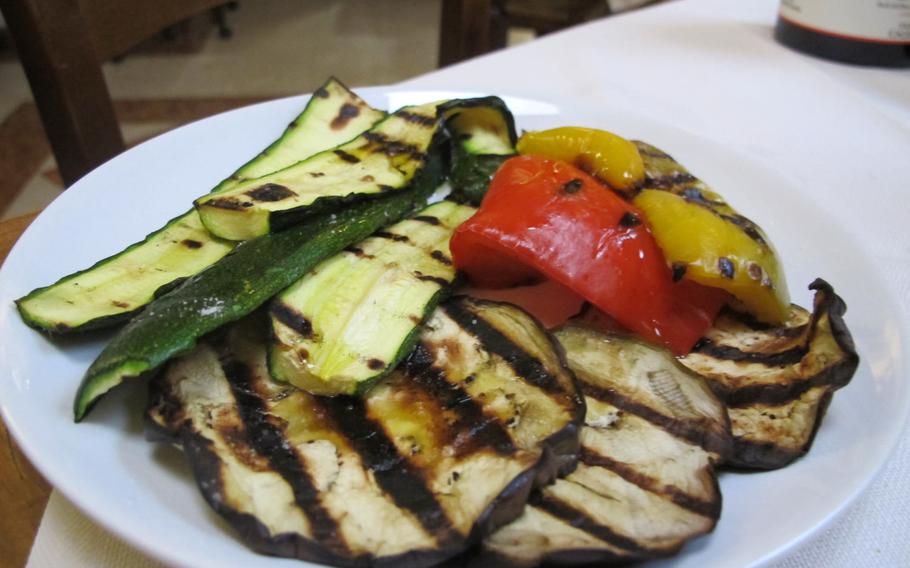 Grilled zucchini, eggplant and peppers, both healthful and colorful, is one of the side dishes offered at Malvasia restaurant in Vicenza, Italy. (Nancy Montgomery/Stars and Stripes) 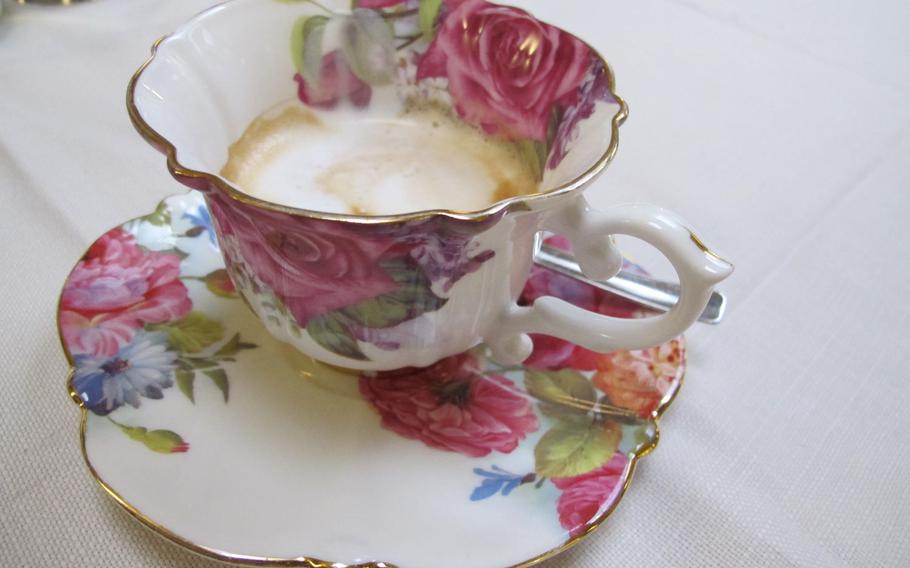 The macchiatto arrived in a pretty if untraditional china cup at Malvasia. (Nancy Montgomery/Stars and Stripes) 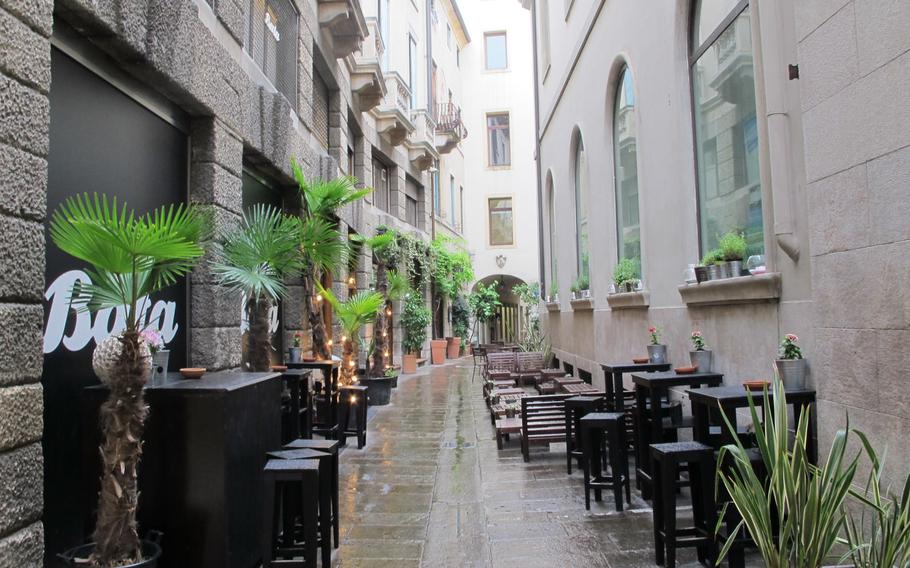 The leafy alley that the Malvasia restaurant shares with a wine bar in Vicenza, Italy, gets busy late in the evening. On a rainy afternoon, not so much. ()

Just want a salad? The restaurant in Vicenza, Italy, offers five, Caesar and Greek, tuna and egg, strawberry and cheese and a side salad.

Fish comes in filet form or the Vicenzan obsession that is baccala, salt cod.

There’s a chicken breast and a pork chop, sliced steak and beef filet. There are even eggs and asparagus, and lamb kabobs with Greek yogurt.

So it took a while during a recent lunch there to decide what I wanted. I’d had the lamb before — a tad chewy. I can make steak and pork chops at home. Pasta seemed a little too carb-y, although I did hesitate over the trofie with a sauce of pesto, burrata cheese and tomato. That sounded great.

It was a little after 2 p.m., so the lunch rush was ending. Just a handful of diners remained over their espressos, dialing down the noise caused by the low ceilings, stone floors, brick walls and absence of upholstery when the restaurant’s three rooms are full. But I could actually hear the elevator music played softly over the speakers.

It was peaceful, with the creamy linen tablecloths and discreet light from the sconces on the stucco walls. I ordered a glass of what turned out to be excellent sauvignon for 2.50 euros.

In the end, I went with the cod filet, priced at 15 euros. Not many Vicenzan restaurants offer an unfussy grilled or roasted fish, I reasoned, certainly not for only 15 euros. And what was not to like about the accompanying cream sauce enlivened by bacon bits?

My friendly server brought it out shortly. It was small but perfectly cooked and surrounded by the sauce, which turned out to be a little bland and quite filling. It was comfort food, really.

I noticed that I had no sides, then ordered the grilled vegetables.

They were also fine, if likewise lacking in excitement.

But my macchiatto was a surprise. It arrived in a pretty floral china tea cup.

Menu: Ranges from pasta to meat to fish and is available in English.