The tortoise, the hare and the hairy retiree 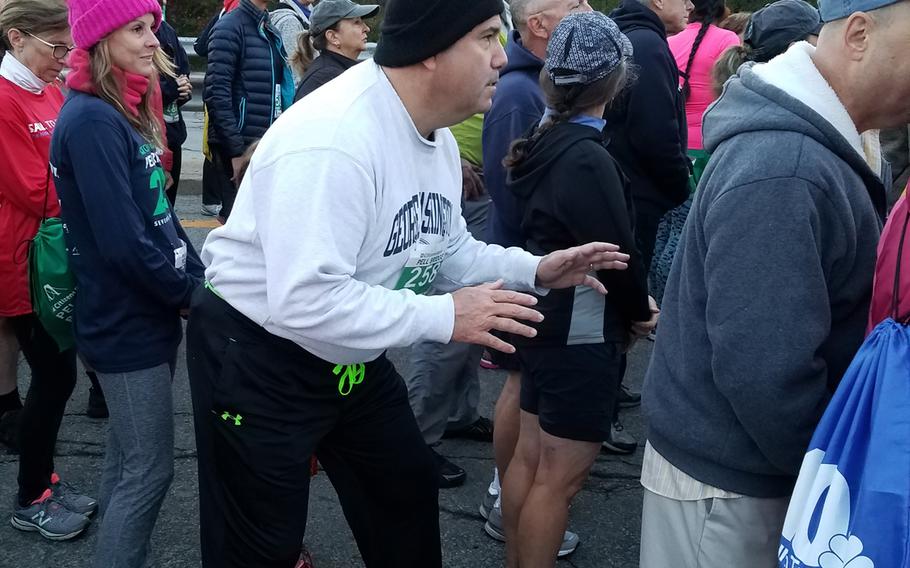 Let’s face it — nothing packs on the pounds like getting out of the military.

After years of being weighed, measured, poked and prodded by Uncle Sam in the name of combat readiness, newly separated service men and women are abruptly set free from fitness standards. They swap uniforms for stretchy civilian clothes, embrace hair growth, and eat without fear that a side of fries will jeopardize their careers.

My husband, Francis, has been thoroughly enjoying this freedom for almost a year now, so it was no surprise when he recently announced, “I’ve signed us up for the Pell Bridge Run so I can get back into shape.”

Most people enter races after they’ve gotten fit, but not Francis. He subscribes to the theory that committing himself to a race that is well beyond his physical capabilities will shock his self-discipline back to life. He has huffed, puffed and chafed through triathlons, bike races and full marathons with hardly any training. While these events temporarily boosted Francis’ self-esteem, his motivation was always short-lived.

At least the Pell Bridge Run was only four miles, and included racers of all fitness levels. He had signed me up too, and I liked the thought that we might embark on an exercise routine together.

On the morning of the race, we huddled in the dim chill near the free coffee tent, eyeing our competition. There were runners wearing moisture-wicking spandex and state-of-the-art gel soles. They obsessively stretched their hip flexors, checked the split timers on their sports watches, and breathed in through the nose and out through the mouth.

“C’mon honey,” Francis called as I exited a Porta-potty, “time to line up!”

We scanned the mass of people behind the starting gate, organized in groups by speed.

“There it is!” I exclaimed. “The twelve-minute mile sign is back there!”

There they were. People wearing t-shirts emblazoned with, “Bacon is meat candy.” People with vapes dangling from their necks. People who haven’t stretched since the Ford administration. People so in tune with their physical limitations, they wore khakis and loafers.

Finally, we had found our people.

Francis, who wore his track pants cinched up too high, decided to stretch. Like a Broadway actor, he made a dramatic production of bending at the waist, reaching his hands past his shins toward his quadruple E feet. His knees buckled, and I heard a grunt. His fingers had stopped cold, six inches above his laces.

Our plan was to walk the first two miles uphill to the top of the bridge, but as we passed the starting line, we broke into an adrenaline-fueled trot. By the time we jogged up the first expanse of bridge, we had already run a mile and didn’t feel like stopping. The crisp fall air, the sun rising over the bay and the excitement of the crowd carried us effortlessly along.

Propelled by camaraderie with our fellow racers, we kept going, even as a twinge of nausea set in and sweat began to pour. “Do you want to walk a bit?” I puffed to Francis, whose breathing had become alarmingly labored.

We might have been wheezing and stumbling, but we made it to the apex of the bridge that morning, 215 feet above the sparkling bay. The pride in our accomplishment kept us running, albeit slowly.

Instinctively, we knew this four-mile run was a metaphor for the progression of our lives, and we were determined to keep going, up and down, slowly and steadily. And as we crossed the finish line, we were reminded that the challenges we’d faced along the way were what made life’s rewards so sweet.