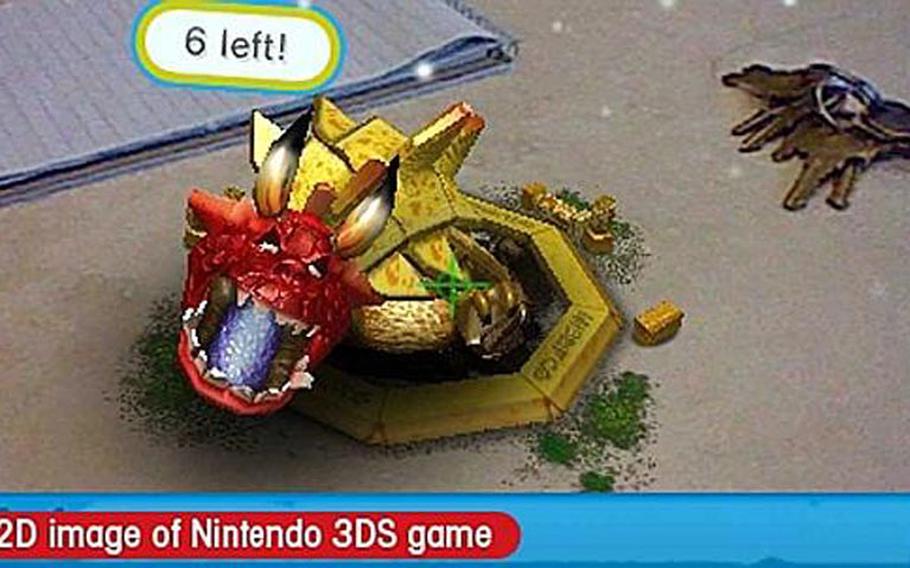 In this video game image released by Nintendo, a scene is shown from, "AR Games." (AP Photo/Nintendo)

In this video game image released by Nintendo, a scene is shown from, "AR Games." (AP Photo/Nintendo) In this video game image released by Nintendo, puppies frolic in a scene from "Nintendogs + Cats." (AP Photo/Nintendo) 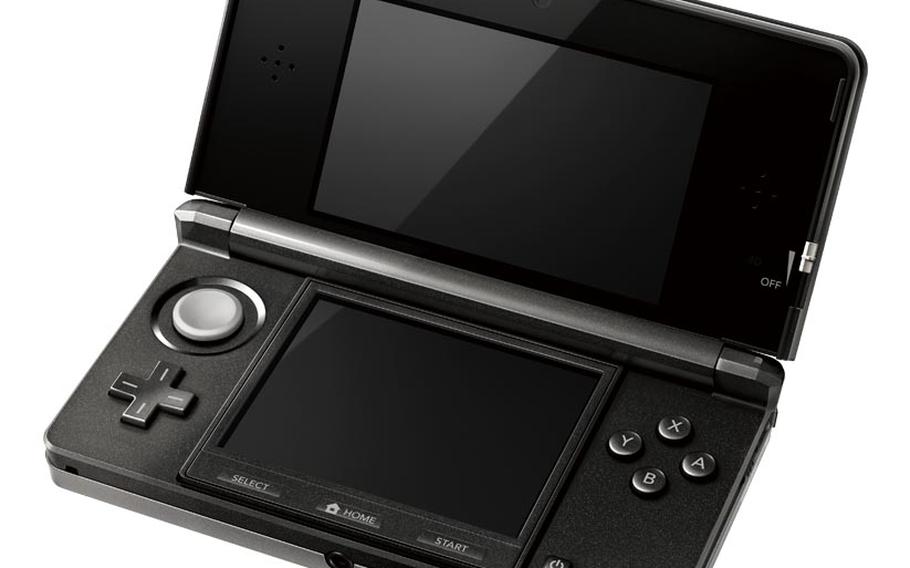 It&rsquo;s hard to describe the visual experience of seeing something turn from 2-D to 3-D. If a picture&rsquo;s worth 1,000 words, it takes exponentially more to describe the sight of a background giving way, and falling into the distance &ndash; of the z-axis suddenly appearing where there once was none.

It&rsquo;s a kind of modern-day technical magic. And it, coupled with a brief countdown, is how Nintendo&rsquo;s 3DS welcomes us all to the world of glasses-free 3-D gaming.

After more than a week with the 3DS, this reviewer can tell you the system isn&rsquo;t without flaws: The battery life is borderline unacceptable, the resolution on the cameras is severely limited and the glasses-free promise has noticeable limitations. But when you first turn on the system, and the flick of a slider leads you into a virtual world with literal depth, there&rsquo;s no denying the magic or potential this little system holds.

The good news is, as long as you hold the system still &ndash; about 14 inches from your face and straight on &ndash; the screen is flawless, and the power of its effect is up to you. Nintendo ingeniously included a slider on the right side of the screen that lets you control how deep your eyes can focus into the background, or if you&rsquo;d like, you can even turn off the 3-D effect altogether. After some time with the system&rsquo;s launch lineup, it&rsquo;s apparent that some developers still don&rsquo;t know how to use depth effectively. When it&rsquo;s bad, it&rsquo;s really bad. Blurry images can haunt your peripheral vision, you may not know what to focus on or where the action is and your eyes may actually hurt from the strain and confusion. When that happens, you&rsquo;re going to jump to that slider to turn things off.

But most of the time, even in these early launch titles, it&rsquo;s exciting to see and it works. The addition of 3-D is almost like the jump from black and white movies to color, or from mono recording to stereo. Three dimensions in gaming is not a visual fidelity leap; it&rsquo;s not going to give us better graphics or change game play. But it is a leap for perspective. A seemingly dull &ldquo;Madden NFL Football&rdquo; play is a lot more interesting when you can actually tell how close the defense is as they chase you down the sideline. The layers of color and text in &ldquo;Street Fighter 4&rdquo; menus actually pop as depth leads your eyes and gives them prominence over each other.

These effects aren&rsquo;t going to make Madden or Street Fighter better games. At its best, 3-D effects add a visual depth that help guide decision making (or at least help you make more sense of why you crashed and burned). Nintendo knows this, and that&rsquo;s why the 3-D screen is just the tip of the iceberg.

More so than any previous Nintendo system, the 3DS wants to be connected to your world. There&rsquo;s a universal friends list to help you keep track of what your buddies are playing, even while you&rsquo;re in-game. There are two wireless features, SpotPass and StreetPass, that connect your 3DS to others systems and content hubs while your 3DS is in standby mode. There&rsquo;s a pedometer that tracks and gives coins for how many steps you take with your system. And almost every piece of pre-loaded software has its own version wireless functionality that takes advantage of some or all of these abilities.

It&rsquo;s about time that Nintendo finally embraced what Xbox Live and the PlayStation Network have been doing for years, and it&rsquo;s remarkable how much further they try to take it. Unfortunately, there&rsquo;s no way to know for certain how good some of these ideas will be until a lot of 3DS units are sold, but they certainly have potential. Right now if I pass a 3DS owner on the street, our Mii Plazas will populate each other, our &ldquo;Street Fighter 4&rdquo; gangs will fight and unlock collectibles, and we could trade details about our favorite songs. In the future, any multitude of other games could interact and make new content &ndash; all without the touch of a button.

Not everything needs a button when the system&rsquo;s open and running, either.

There are three powerful, and arguably equally intriguing input devices added to this DS update: (1) a circular, thumb-fitting joystick, (2) three cameras (one on the interior and two on the backside that can track and focus on an object) and (3) two motion sensors. Adding another visual dimension isn&rsquo;t the same as adding another input device. And these motion detecting gizmos aren&rsquo;t going to expand on the motion-gaming craze that&rsquo;s been brought to the next level by Move or Kinect, but together this collection of tools offers potential that no other gaming system matches.

Just like it did for the Wii, Nintendo included a small selection of mini-games to show off the system&rsquo;s potential. Nintendo 3D Sound allows you to play audio clips and mp3 tracks straight off of the system&rsquo;s SD card, or record your own through the system&rsquo;s microphone. You can setup playlists, share information about your music with nearby 3DS users, and even manipulate your tracks with some basic audio tools.

The real meat, however, lies with the &ldquo;AR Games.&rdquo; Using the outside cameras and the help of a few color cards included with the system, AR Games project images over whatever is in front of you. Treating your 3DS as a camera, you defeat dragons that spawn from a volcano on your table, paint a flower on the touchscreen and make it dance and jump next to your coffee mug, or fish for a red snapper swimming in a pond that has formed in your couch.

Each of these experiences bring the 3DS&rsquo;s powerful tools to the forefront, even if only for a short moment. Literally moving around your table to find a weak spot on a dragon, or tilting your 3DS above of a mound of imaginary dirt to find a target in hidden hole is undeniably novel and fun. Tugging the system to bring your fish out of the water or snapping a photo of yourself with the interior camera only to later see it fly around the room you&rsquo;re in are the experiences that snowball together and build curiosity over this system&rsquo;s full potential.

And on top of it all, don&rsquo;t forget that there&rsquo;s a 3-D functionality in here.

Despite the thrilling tidbits, though, there is still a list of complaints. The battery life is horrid. With all features in use, Nintendo promises no more than 3 to 5 hours of use on a full charge. While I wasn&rsquo;t able to go full-throttle on the wireless functions, I did peak at around 5 hours of single-player use before I needed to find an outlet, and for a portable system that really wants to be carried with you throughout the day, this is borderline unacceptable. Combined with the $250 price point &ndash; Nintendo&rsquo;s highest ever for a portable system &ndash; gamers (or parents of gamers) should carefully weigh whether or not you want to jump in with this system&rsquo;s first iteration (the original Nintendo DS saw three revisions).

Some parents may also be worried about possible harmful effects of the 3-D screen on children. Nintendo issued a warning that the screen should not be shown to children under the age of 7, and the company included parental controls over the 3-D screen and every aspect of wireless functionality included in the system, including the Internet browser.

Nintendo focused a lot more on meshing these ideas together rather than releasing a graphics power house. The launch titles look at best like mid-level PS2-era games, and though surely we&rsquo;ll see better as developers get more familiar with the hardware, don&rsquo;t expect a pixel-perfect Mario Galaxy 2 port anytime soon. There&rsquo;s a definite potential here for long-form amazing video game experiences, but the best of what we&rsquo;re starting with are a visual experiences both awe-inspiring and jarringly-short lived.

It&rsquo;s weird &ndash; sometimes awkward and trippy, even &ndash; but when you combine all of this into one experience, it&rsquo;s absolutely unprecedented. Welcome to gaming&rsquo;s new depth.