The effort to provide a choice 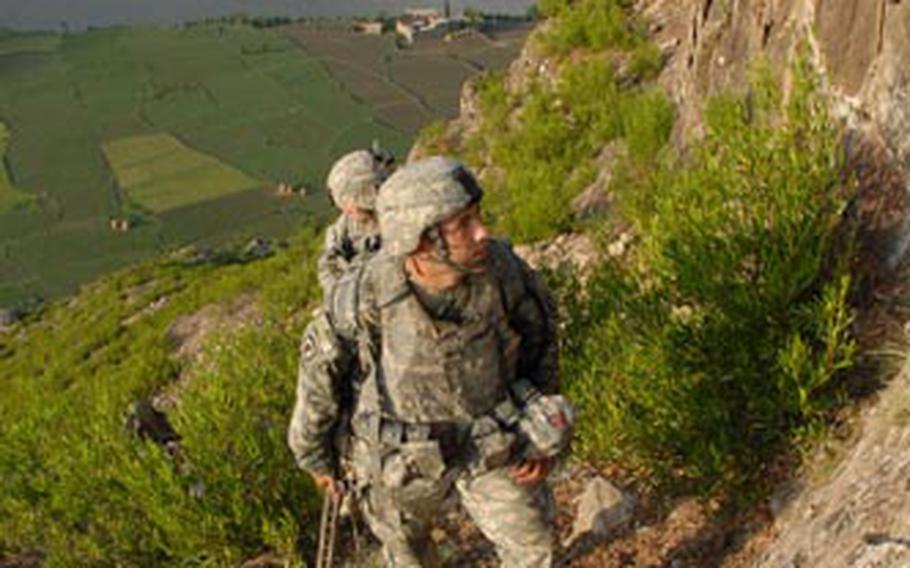 Sgt. Scott Lombardi, 31, from Salt Lake City, and a member of 1st Squadron, 91st Cavalry Regiment’s Headquarters and Headquarters Troop reconnaissance platoon, looks up the mountainside in Nuristan Province, Afghanistan. Lombardi and the rest of the platoon spend much of their time looking for insurgent activity in the mountains and ridgelines surrounding the squadron’s home at Fire Base Naray. (Mark St. Clair / S&S)

Sgt. Scott Lombardi, 31, from Salt Lake City, and a member of 1st Squadron, 91st Cavalry Regiment’s Headquarters and Headquarters Troop reconnaissance platoon, looks up the mountainside in Nuristan Province, Afghanistan. Lombardi and the rest of the platoon spend much of their time looking for insurgent activity in the mountains and ridgelines surrounding the squadron’s home at Fire Base Naray. (Mark St. Clair / S&S) 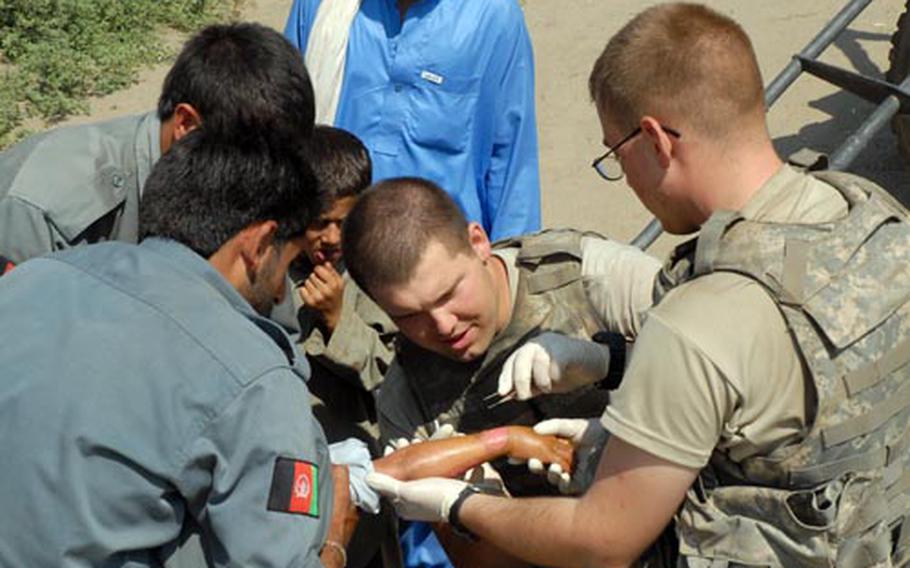 When Task Force Saber arrived in northern Kunar and eastern Nuristan provinces in June 2007, there were no paved roads, no fresh water, no electricity.

Fifteen months and $12 million in construction projects later, the task force &#8212; made up mainly of 1st Squadron, 91st Cavalry Regiment with the addition of Company B, 1st Battalion, 503rd Infantry Regiment (Airborne) &#8212; has made life better for the more than 190,000 Afghans living in the region.

"We spent a lot of time in the summer of 2007 understanding the people and understanding the insurgency (in our area) to better use our combat power," said Lt. Col. Christopher Kolenda, commander of the task force that fielded more than 500 soldiers.

Young men were left to choose between the authority of the traditional tribal elders and "a violent, well-armed and well-funded middle class."

So while there was, as Kolenda explained, as small portion of "hard core ideologues" within the local insurgency, many of the fighters were just looking for available opportunities.

"We tried to develop ways to reduce the attraction to the insurgency," Kolenda said. "We did quite well."

Though Saber&#8217;s cavalrymen and infantrymen occupied various bases and camps throughout their area of operation, no paved roads connected them. In fact, Kolenda said, no paved roads exist in the area at all.

In addition to the lack of electricity and water, there was no health care. But Saber&#8217;s medical specialists treated more than 10,000 Afghans, saving at least 70 lives, Kolenda said.

In addition to the $12 million of ongoing or continued reconstruction projects, another $6 million worth of projects &#8212; such as schools, clinics and micro-hydro power plants &#8212;are proposed.

A $40 million proposal for the region&#8217;s first paved road is being looked at, Kolenda said, as well as another $30 million in PRT projects.

When a Saber noncommissioned officer spotted an abandoned construction facility while on patrol early in the rotation, he notified his chain of command, knowing that a proposed trade school was in the works and needed a good location. In March, 1,250 Afghans graduated, as well as another 1,250 every year, having learned such skills as carpentry or masonry.

A key factor in the school&#8217;s success, Kolenda said, is the fact the faculty is all Afghan.

Since the region has "2,000 years of negative baggage with foreign powers," Kolenda said, one of the basic rules Saber followed was to let Afghans solve Afghan problems.

"It&#8217;s an extraordinarily complex environment. The better we understood the tribal/clan breakdown and how they interacted with each other, the more successful we were," Kolenda said.

Letting the locals take ownership in their decisions and being respectful of local customs in regards to escalation of force paid off in spades, Kolenda said, offering an example of Operation Mountain Highway, which took place in late April.

More than $1.2 million in development was tied to the operation, and it included a region that the insurgency had long deemed crucial to their efforts. Still, because of the level of trust the nearby villages had for the unit and its Afghan Security Forces counterparts, a planned attack was thwarted and 130 enemy fighters were captured without a shot being fired.

Kolenda also mentioned that locals tipped off coalition forces to large attacks on June 21 and Aug. 2, giving Saber more chances to smack down the enemy.

"When you get hammered that badly every time you fight &#8230;," Kolenda said of the dwindling attraction of the insurgency in the region.

"When we fought, we fought hard, we fought well and we punished the enemy without harming civilians," Kolenda said.

Still, the successes did not come without a cost, as four members of Task Force Saber were killed in combat and 37 more were awarded Purple Hearts.

In all, 40 new villages in Saber&#8217;s AO joined the governmental effort during its 15 months. A drastic rise in Afghan border police also occurred, as only 70 men were patrolling in June 2007, but 350 were there when the task force left.

Hoping that the successes Saber saw will continue, Kolenda and his staff, "spent a lot of time with the unit that replaced us, educating them," he said, referring to 6th Squadron, 4th Cavalry Regiment from 3rd Brigade Combat Team, 1st Infantry Division.

"Ninety-five, 98, 99 percent of the people (in the region) are great people who just want to live normal lives &#8230; I&#8217;m extremely proud of what we accomplished, of the effects [TF Saber soldiers] had with the people, how hard and how well they fought and their level of discipline."