The burden on those left behind 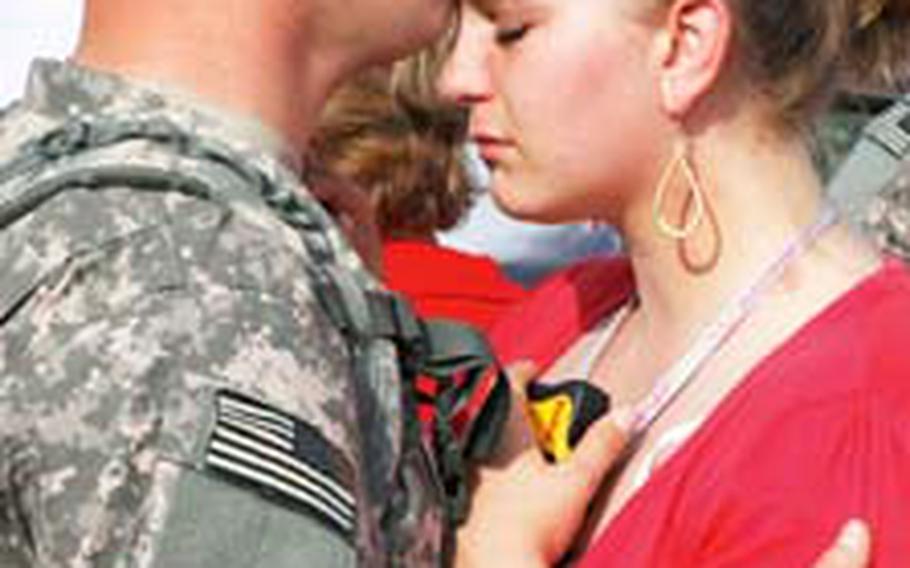 Spc. Dennis Singleton of Company B, 120th Combined Arms Battalion, comforts his fiancee, Jessica Harron of Hendersonville, N.C., as he prepares to board a bus. (Joe Gromelski / Stripes)

His son, Sgt. Dennis Abels, is a mortarman with the 1st Battalion, 252nd Combined Arms Battalion. He&#8217;s shipping out with the North Carolina National Guard&#8217;s 30th Heavy Brigade Combat Team, headed back to Iraq for his second tour.

Still, he has every confidence in his son&#8217;s being able to handle himself.

Dennis Sr. was himself a combat engineer with the 9th Infantry, 15th Engineers in Vietnam, and spent an extended tour there, from July 1967 to November 1968.

As he watches his own son deploy for a second time, he gets a sense of what it was like for his own parents, back in Queens.

"My mother bought me a St. Christopher medal I wore when overseas [in Vietnam]," Abels said. You know, my wife bought one for [my son&#8217;s] first tour. He still wears it."

At an overcrowded April deployment ceremony in Fayetteville, N.C., the importance of families was not lost on Col. Greg Lusk, commander of the 30th Heavy Brigade Combat Team.

"The majority of heroes are the families, who indeed remain here at home, carrying out all of the equally important aspects of our mission."

Lusk estimated that his soldiers really only make up about one third of his force.

"The ones who stay back home, they have the tough job," he said.

As deployment rates have skyrocketed this decade, military families have had to learn to cope with extended, repeated absences and the disruption of family life.

This is the second deployment for the family, and the first since the birth of the Peploes&#8217; youngest child, Gabrielle, 2.

Perhaps nowhere are those challenges more evident than in the National Guard and Reserve components, where often families aren&#8217;t close to a military base, yet still need health care and other services.

Diane Coffill, who heads the North Carolina Guard&#8217;s Family Readiness program, has become well attuned to the sacrifices made by military families.

Over the past several years, her office has established family service centers at National Guard armories throughout the state to assist families far from military bases. These centers ensure that families left behind have the same access to health care, financial counseling and emergency assistance as those supporting active-duty units on or near a military base.

Coffill points out that most states have similar programs to assist all military families during deployments. While her office primarily supports the North Carolina National Guard, military families from all branches are eligible to come in for assistance.

Tracy Cothran, mother of four young girls, has also been through a deployment before. Her husband, Sgt. Rick Cothran, went to Iraq with the 30th in 2004, and was heading back again in April. She noted that the support for military families has come of age since her family&#8217;s first deployment.

"Before, we were kind of thrown to the wolves," she said.

But this time, as the girls have gotten older and are busy with sports and other activities, she relies on the various programs for assistance in keeping them busy during Cothran&#8217;s current tour of duty. Tracy Cothran is taking advantage of grants to send her kids to various sports and music camps.

At the deployment ceremony, the girls are shy, but have a message for their dad.

Is it tough taking care of four girls while he&#8217;s gone?

"I have my moments," Tracy said with a weary smile.

Diana Peploe, with two children and enrolled in college, echoed a similar sentiment. "It might be a little easier, because I&#8217;m more busy," she said.

Among the programs available to military families in North Carolina is Kids On Guard, a state-based program in which children of deployed servicemembers get together to share their experience, so they get to feel that "they&#8217;re not the only child in the neighborhood experiencing this deployment," Coffill said.

Coffill&#8217;s office also works with Army posts to enhance children&#8217;s activities while a family member is gone. At Camp Butner, north of Fort Bragg, children participate in day and weekend camps designed to show them the military life, complete with volunteers who explain the jobs and traditions of the armed forces.

The programs don&#8217;t target only spouses and children.

Dennis Abels said his whole family stays "dialed in," going down to the local armory to put together care packages for his son&#8217;s unit.

"Servicemembers that have been gone are sort of stuck in a &#8216;time-bubble,&#8217; " she said. While troops are downrange, families are making huge adjustments to keep life at a normal pace as children grow and become used to being without a parent. The result is often a disconnect when the servicemember comes home.

"Re-establishing that &#8216;new normal&#8217; and how everybody fits in &#8230; can take its toll," she said. To that end, Coffill&#8217;s state and federally funded organization has expanded programs to facilitate communication and counseling services for the families.

"When they do get home, the servicemember is sitting on the outside saying, &#8216;They went on without me,&#8217; " she said. "Let us put [the families] in touch with the right people so you can get them all the way home."

It took Dennis Abels Sr. 30 days to get home after he got his orders out of Vietnam.

The father of a young daughter is deploying for the first time with the 30th Brigade&#8217;s 1st Battalion, 252nd Combined Arms Battalion. He knows he has the support.