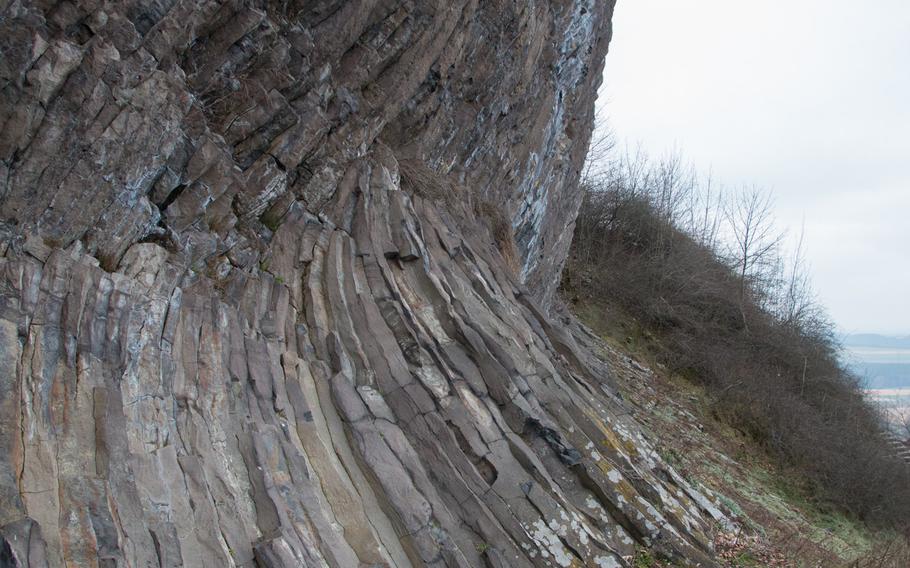 The interesting element of Parkstein, Germany's, basalt hilltop is its unique, hexagonal structure. Eons ago, the area was part of an active volcano, leaving behind these unusual, wavelike rock formations. (Michael S. Darnell/Stars and Stripes)

The interesting element of Parkstein, Germany's, basalt hilltop is its unique, hexagonal structure. Eons ago, the area was part of an active volcano, leaving behind these unusual, wavelike rock formations. (Michael S. Darnell/Stars and Stripes) Parkstein, Germany's, basalt hilltop doesn't provide the lengthiest hiking trail, but it's perfect for families or hikers looking for a quick, but interesting spot to wander about. (Michael S. Darnell/Stars and Stripes) 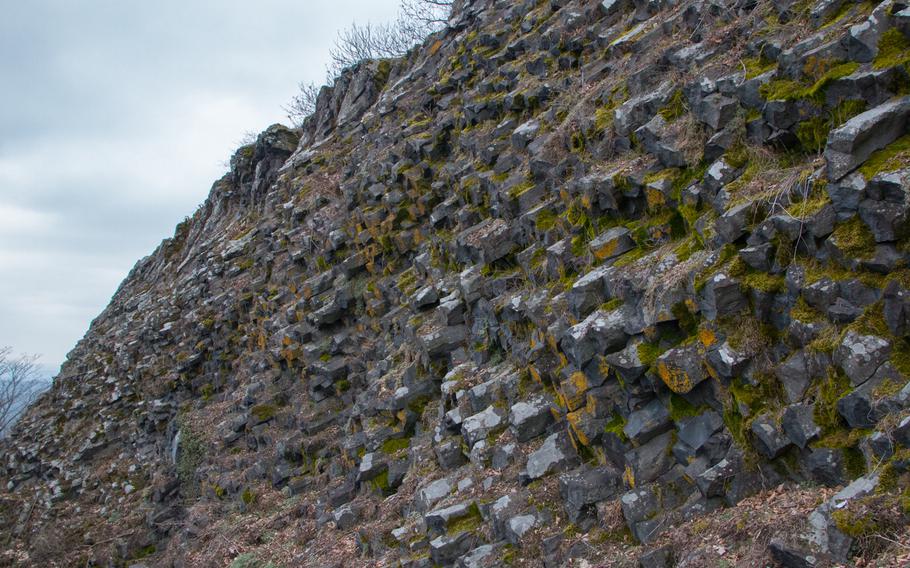 While doubtful there is an abundance of amateur geologists among the military communities of Vilseck and Grafenwoehr, Germany, any nature lover should be able to appreciate the basalt formations that make up the hilltop in Parkstein, Germany. (Michael S. Darnell/Stars and Stripes) A shrine to Saint Mary is carved into the mountainside alongside one pathway up the basalt hilltop in Parkstein, Germany. (Michael S. Darnell/Stars and Stripes) The sides of the basalt hilltop in Parkstein, Germany, appear as waves of stone, each a collection of hexagonal rock pillars. (Michael S. Darnell/Stars and Stripes)

If the obnoxiously early chirping of birds is anything to go by, spring isn’t around the corner. It’s here. That means a couple of things for troops stationed in the Upper Palatinate region of Bavaria.

One, the winter pudge that has been growing ever larger since the holiday food binges can no longer be hidden by heavy coats.

The area near the Grafenwoehr and Vilseck training areas is packed with great hiking paths that will help eliminate the winter weight while offering truly breathtaking views.

Some, like Rauher Kulm, are fantastic for reasonably seasoned hikers. Others, like the pathways winding in and around Pottenstein, are usually packed with people. Parkstein, though, has a nice, relaxing hiking path that is perfect for a quick family trip. There aren’t any crowds, and you won’t pay a dime.

Located just 20 minutes away from the main Grafenwoehr gate, Parkstein is a small town of about 2,500 residents. If it weren’t for the basalt hilltop jutting up from the middle of the village, it would differ little from other Bavarian hamlets.

That hill, part of the Steinwald mountain chain, is the town’s primary tourist destination. It peaks at just under 2,000 feet high, which would classify it as a gentle, rolling hill for Bavarians who live among the Alps to the south.

What makes it truly interesting, however, isn’t its height but rather its unique basalt structure. Waves of hexagonal columns form the sides of the hill, giving the impression of a rolling sea of stone, frozen in place for all eternity.

The hike up the hill is aided on one side by weathered stone steps that lead up to the stone ruins of an ancient church. There’s a newer church at the hill’s pinnacle. From here, visitors can view the entire valley — an impressive sight on a clear, sunny day.

There is also a paved pathway that winds around the mountain, which is a great help for small children and parents with strollers. Along the path are various art pieces, including a number of colorful chipped-stone mosaics.

Either direction shouldn’t take most hikers more than 20 or 30 minutes. This walk won’t challenge the serious hiker, but the basalt hilltop of Parkstein is a beautiful destination that’s perfect for families — not to mention anyone looking to begin the long, arduous process of getting back into bathing-suit shape.

From the Grafenwoehr main gate, take the NEW 16 to the 22, then the 470 east toward Weiden. Take the exit to Parkstein-Hutten and follow the signs to the hilltop.

FOOD Weiden, about 15 minutes away, offers a selection of restaurants.

No times are specified, but considering the rocky pathway, expect some closures after heavy storms.