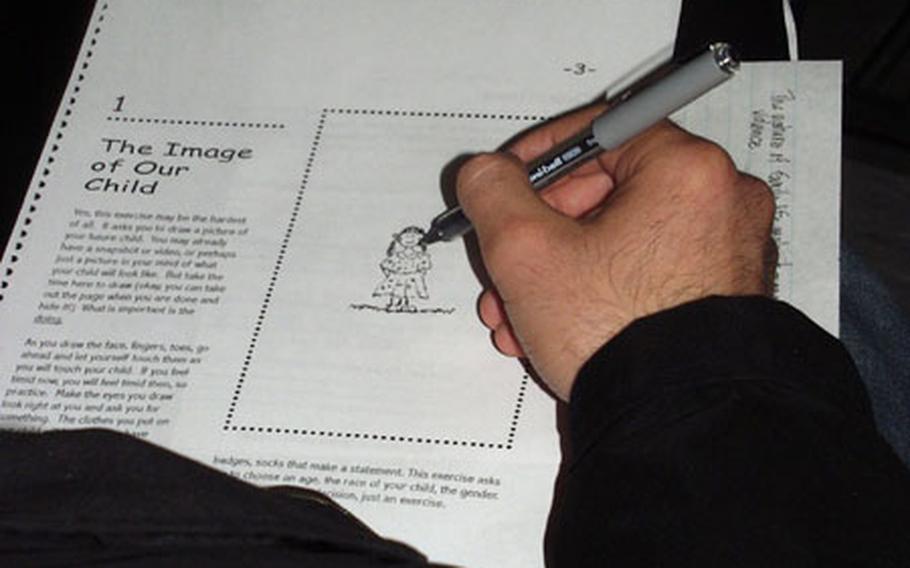 At one of the seminars offered at the 12th annual European Adoption Symposium in Einsiedlerhof, Germany, participants were asked "to draw a picture of your future child." The exercise gave would-be adoptive parents a creative way to express their hopes and expectations. (Kevin Dougherty / S&S)

At one of the seminars offered at the 12th annual European Adoption Symposium in Einsiedlerhof, Germany, participants were asked "to draw a picture of your future child." The exercise gave would-be adoptive parents a creative way to express their hopes and expectations. (Kevin Dougherty / S&S) 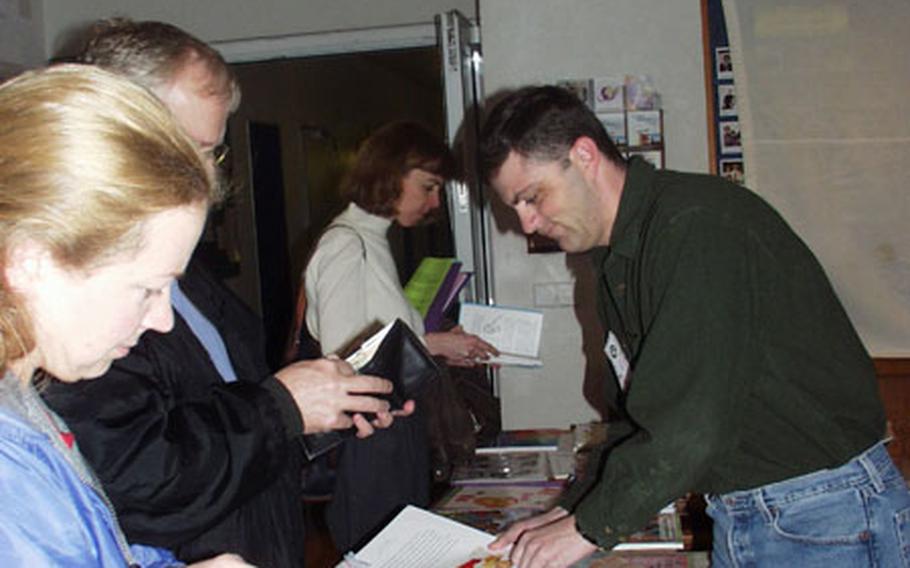 At the 12th annual European Adoption Symposium, held earlier this month in Einsiedlerhof, Germany, there was no shortage of guidance and reference books to thumb through. (Kevin Dougherty / S&S) 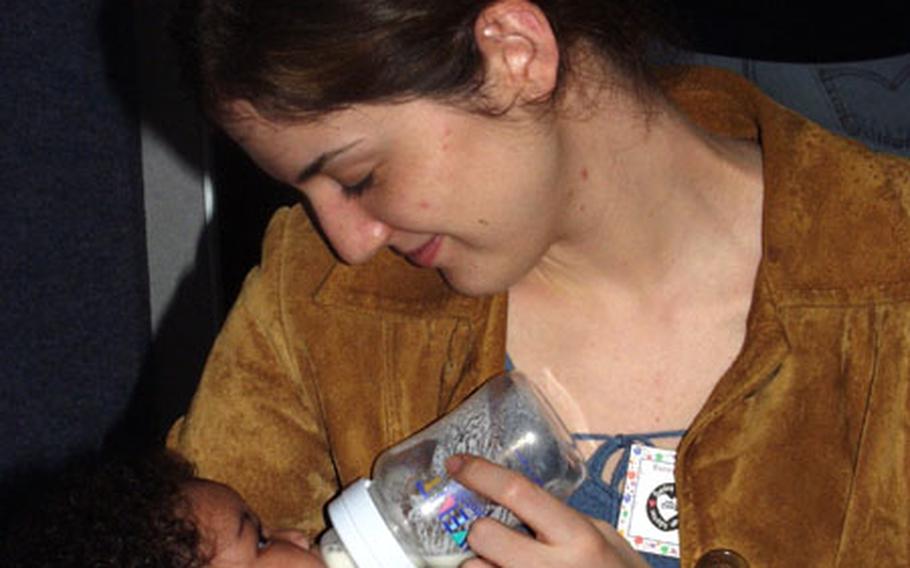 Three years ago, Air Force Senior Airman Sarah Shatzel gave up a baby for adoption. Since then Shatzel has been a regular panelist at the annual European Adoption Symposium. At the recent symposium, held earlier this month in Einsiedlerhof, Germany, Shatzel cuddled and fed 11-week-old Charlae, the adopted daughter of Army Maj. Loye Gau and his wife, Jill. Shatzel speaks to couples about myriad issues facing women who put a child up for adoption. (Kevin Dougherty / S&S)

Right now, the reasoning went, life is too fluid to even consider adoption.

With attendance at the 2003 symposium off by roughly a third compared with the previous year, Veith braced herself for an even smaller crowd this time. She suspected some folks would shelve the idea for a while.

That didn&#8217;t happen. Attendance actually increased, and the symposium, held earlier this month, seemed every bit as lively as in past years.

Two people not content to wait any longer are David and Sonia Kuch.

The Air Force couple hopes to adopt a baby girl from China. If all goes well, Sonia Kuch said, a memorable Mother&#8217;s Day awaits her next year.

She added that Veith could be on to something about the renewed interest, especially as it pertains to servicemembers.

The &#8220;it&#8221; Kuch is referring to is her own mortality. The military, more than any other segment of society, knows full well just how precarious life can get.

Sponsored by the Landstuhl American Red Cross, the daylong symposium drew about 230 people to a church in nearby Einsiedlerhof. The event covered an array of topics, from immigration, money and health issues to adoption opportunities in China, Eastern Europe and the United States.

Veith, who has led the symposium for years, doesn&#8217;t like to sugarcoat things. Neither do the panelists she routinely invites.

Such frankness typifies the annual gathering.

For prospective parents, the goal is to learn as much as possible about the adoption process. To that end, Veith and the Landstuhl Red Cross bring in outside experts from as far away as the United States for the seminar.

Also taking part are couples that have gone through the process. This year, one such couple was Army Maj. Loye Gau and his wife, Jill.

As she spoke, several couples were reviewing their program for the next round of seminars and presentations. The standard practice is for couples to split up and cover two sessions instead of one.

For much of last year, the Gaus had their hearts set on an international adoption. They attended last year&#8217;s symposium and wound up paying thousands of dollars to an international agency before reversing course when a military couple decided to put their unborn daughter up for adoption.

This year, the couple was on the other side, offering their insights as members of a panel discussing open adoptions. An open adoption is when birth parents choose the family they want to raise their biological child. To varying degrees, a lasting relationship is often established between the two families, which could include periodic contact.

The Gaus have such an arrangement with Charlae&#8217;s birth parents.

That&#8217;s something Senior Airman Sarah Shatzel said she wishes she had with the family that adopted her child. For Shatzel, the chance to help others helps her deal with the difficult decision she had to make a few years ago.

Her candor clearly touched members of the audience.

Generally speaking, views toward adoption are &#8220;more open today than ever in our society,&#8221; said Susan Romer, an attorney who specializes in overseas adoptions.

One common misconception, according to Romer, is that an adoption takes years. While there can be delays, many move along quickly and without a hitch. A domestic adoption, for example, usually takes nine to 12 months, Romer said, noting it isn&#8217;t far off of nature&#8217;s timetable.

Carol Albers, the Europe representative of the agency Adopt Abroad, said U.S. troops have long had a reputation of taking children in. So it doesn&#8217;t surprise her that servicemembers continue to embrace adoption as a way to build a family.

Albers credits Veith for making the annual symposium a success, and said she, too, has noticed a growing interest in adoption by military personnel.