Stuttgart: Wilhelma Zoological and Botanical Garden offers the taste of a world safari Buy Photo
Visitors pet a Shetland pony in the demonstration farm of the zoo and garden. The farm also features such animals as wild boars, dwarf goats and many breeds of chickens. (Warren Peace/Stars and Stripes)

Buy Photo
Visitors pet a Shetland pony in the demonstration farm of the zoo and garden. The farm also features such animals as wild boars, dwarf goats and many breeds of chickens. (Warren Peace/Stars and Stripes) 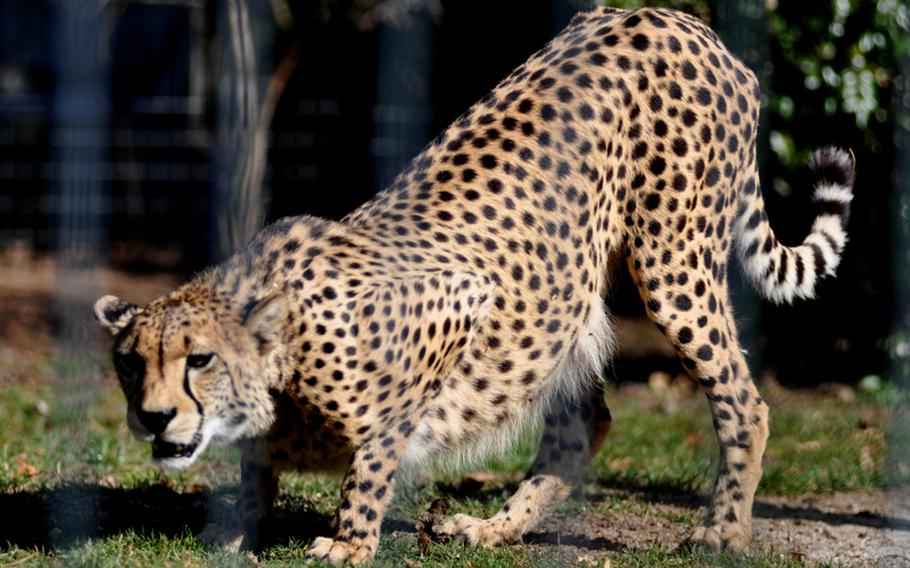 Buy Photo
A cheetah watches children walk by its enclosure at the zoo and botanical garden. The park also has lions, jaguars, tigers and many other beast of prey. (Warren Peace/Stars and Stripes) Buy Photo
An Indian rhinoceros bask in the sun . Indian rhinos are endangered with about 2,400 left in the wild, according to signs near their enclosure in the park. (Warren Peace/Stars and Stripes) 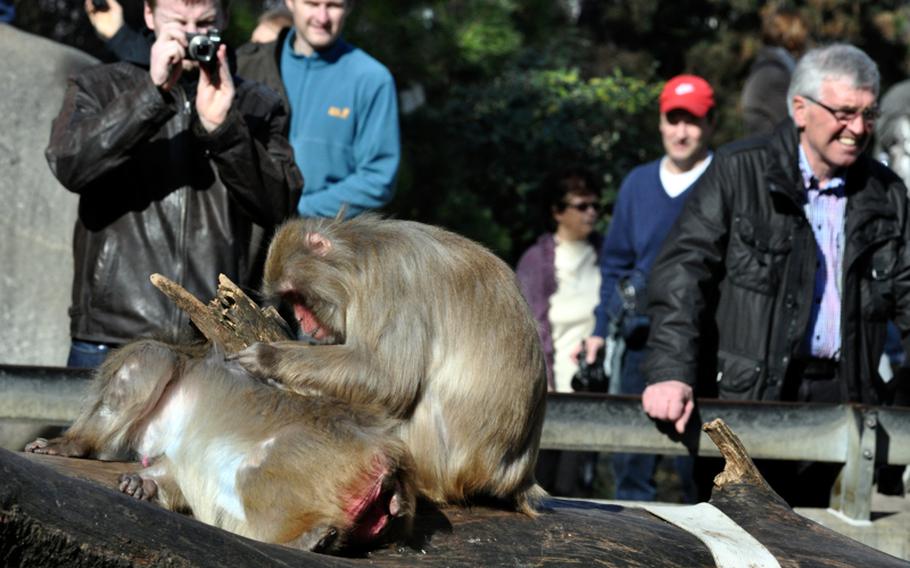 Buy Photo
Oblivious to the spectators, a Japanese macaque, also known as snow monkey, reinforces his social bonds by grooming another member of his troop. Originally from Japan, snow monkeys are now living freely in Texas. (Warren Peace/Stars and Stripes) Buy Photo
The park is home to a band of about 32 Gelada baboons. Geladas are an endangered species. (Warren Peace/Stars and Stripes) 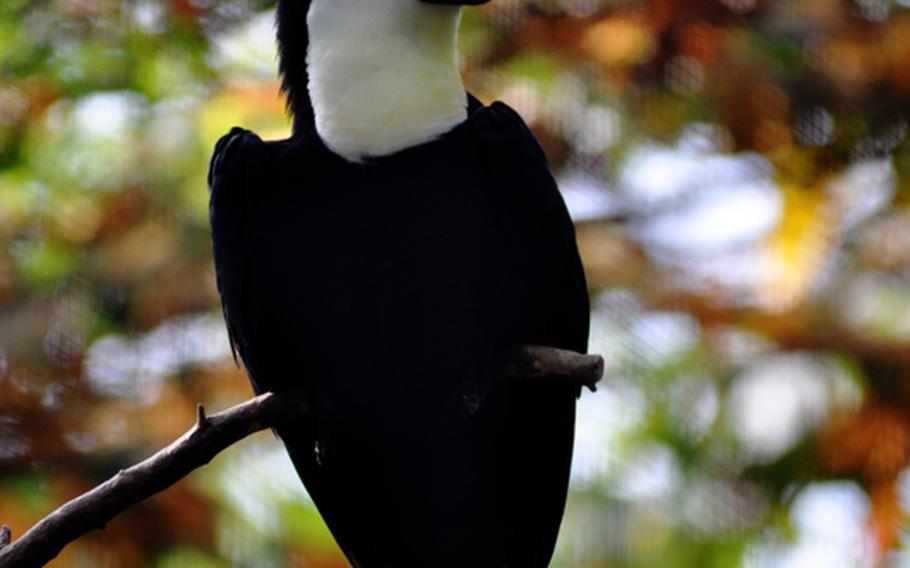 Buy Photo
A toucan perches in the Amazon House at the Stuttgart park. (Warren Peace/Stars and Stripes) 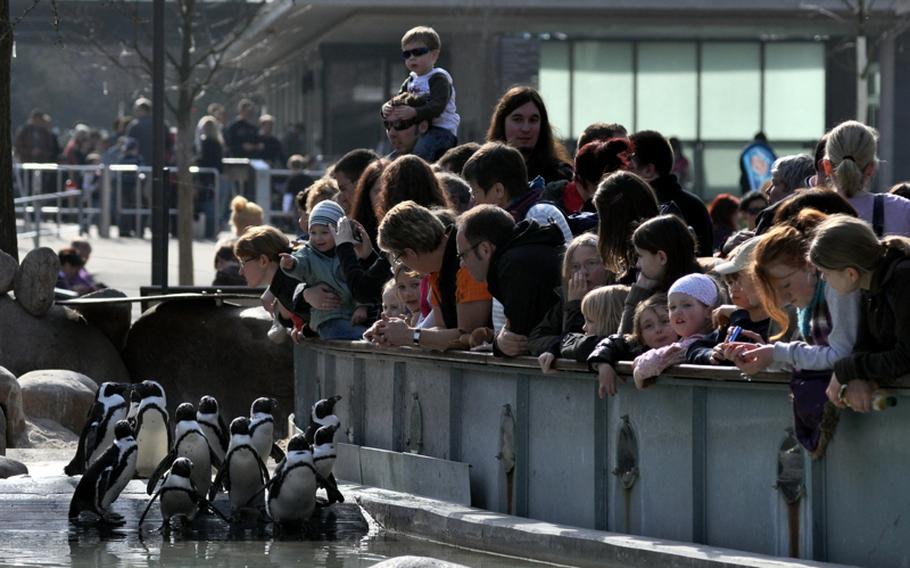 Buy Photo
Visitors watch black-footed penguins at the zoological and botanical garden. Although they were all born in Europe, their reproductive rhythm follows the seasons of their native Southern Hemisphere. (Warren Peace/Stars and Stripes) 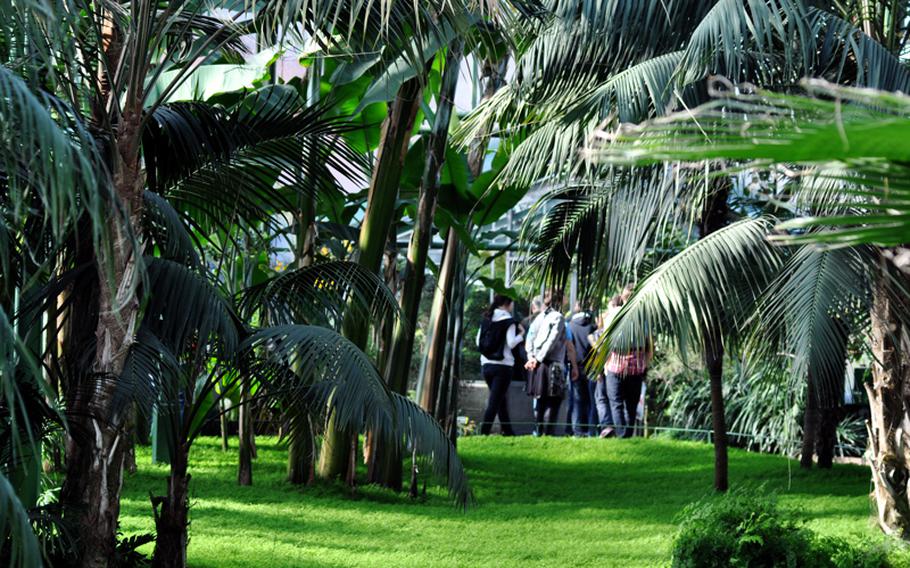 Buy Photo
Tree ferns and palm trees line the paths through the Fern Cupola House at the Wilhelma Zoological and Botanical Garden. Plants like these have been around since the age of dinosaurs. (Warren Peace/Stars and Stripes) Buy Photo
The botanical garden features more than 5,000 species of plants, many of which bear flowers. (Warren Peace/Stars and Stripes) 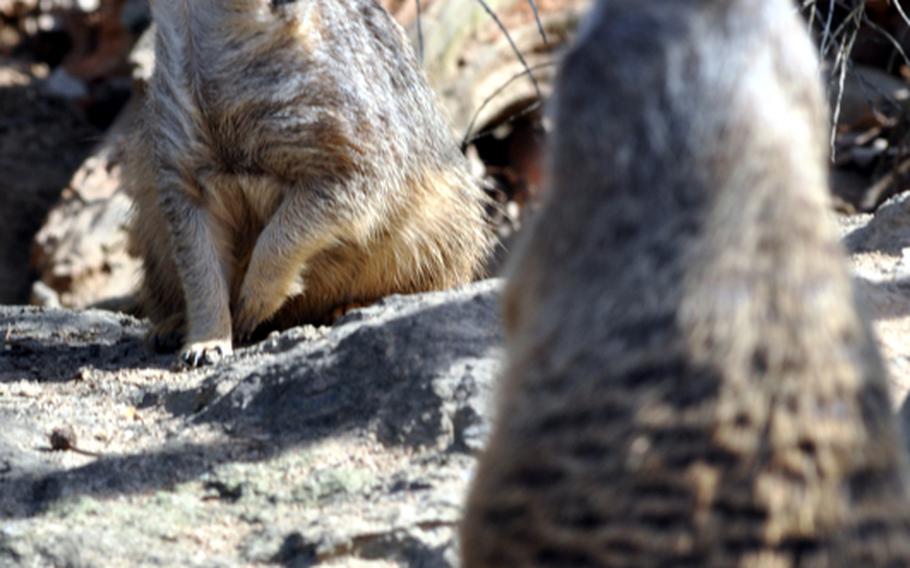 Buy Photo
Meerkats pause from bug hunting to watch for birds of prey at the Wilhelma Zoological and Botanical Garden. The meerkats are next to the giraffes in the African Hoofed Animals section of the garden. (Warren Peace/Stars and Stripes)

Not likely, you say? Well, there&rsquo;s at least one spot where that holds true &mdash; the Amazon House at Wilhelma Zoological and Botanical Garden in Stuttgart, Germany.

This is probably the closest most people will ever get to being in the Amazon rainforest, and probably the safest way to experience it.

Exotic, singing birds fly freely from tree to tree. Monkeys call out to one another. Frogs, lizards and snakes camouflage themselves in the foliage. Crocodiles bask under a waterfall near a creek that crosses the footpath through the indoor jungle.

The only things that seem to be missing are the malaria-transmitting mosquitoes.

There is much more to Wilhelma than the sticky, jungle environment. Its vast collection of life forms makes it a great place to spend a day on a virtual, global safari.

The captive creatures range in diversity from 63-year-old Vilja, the oldest Asian elephant in Europe, to tiny creatures in the Insectarium. If you have a favorite animal, chances are that Wilhelma has a few of them for you to see up close and personal.

If you are more of a botany buff, don&rsquo;t fret. More than 5,000 species of flora from just about every environment on earth adorn the outdoor gardens, greenhouses and animal yards, according to the zoo&rsquo;s website. In fact, the website stresses that Wilhelma is a zoological botanical garden, not a zoo in the generally accepted sense of the word.

As spring begins to show its face in Germany, park officials promise a botanical display worthy of any plant-life connoisseur&rsquo;s time. That might be no surprise, considering the grounds originally were planned as a private garden for King Wilhelm I of Swabia, a region that includes Stuttgart.

It was started in the middle of the 19th century and was named for the king. Nowadays, the 70-acre park draws about 2.1 million visitors a year.

It might be a good idea to break your visit into multiple visits. I think I covered the entire attraction in about six hours, but I felt like I was rushing away from animals I would have liked to have spent more time observing. Something about the way gorillas interact seems so humanlike, it&rsquo;s hard for me to look away.

Once spring gets into full swing, I plan to return and suggest that any nature lovers who don&rsquo;t have hang-ups about animals in captivity do, too.

On the QTDirections:The Wilhelma Zoological and Botanical Garden is on Neckartalstrasse just north of the city center in Stuttgart, near the intersection of B27, B14 and B29. Once in the city from autobahn 8, 31 or 81, follow the signs marked by an elephant symbol to the park. It&rsquo;s address for those using a GPS is Neckartalstr. 9, 70376 Stuttgart. The garden also has its own U-Bahn station, named Wilhelma. If your train has tiger stripes, you are on the right one.

Hours:The park is open year-round, beginning at 8:15 a.m. and closing between 4 and 6 p.m. depending on the time of year. Currently, the main entrance closes at 5, but once you are inside, the animal houses close at 5:45 and the aquarium and Amazon House close at 6.

Prices:From March through the end of October, day tickets cost 12 euros for adults and 6 euros for children; winter rates and after 4 p.m. admission are one-third off. Family tickets, group rates and season passes are also available.

Food:The garden has three restaurants, all with different views of the plants and animals, and snack stands are scattered throughout. The largest eatery, the Wilhelma Restaurant, can seat up to a total of 1,000 people inside and out, and serves full meals and regional specialties.