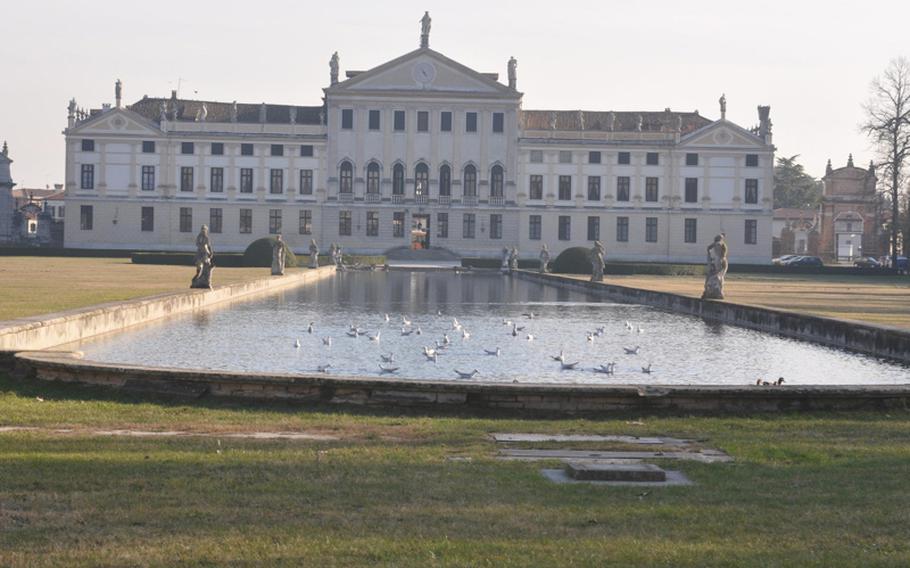 Buy Photo
A long pond connects the main part of the Villa Pisani Nazionale with outbuildings. Visitors can wander through a series of landscaped gardens and small bits of forest while touring the site, which doesn't attract a lot of visitors in the winter. (Kent Harris/Stars and Stripes)

Buy Photo
A long pond connects the main part of the Villa Pisani Nazionale with outbuildings. Visitors can wander through a series of landscaped gardens and small bits of forest while touring the site, which doesn't attract a lot of visitors in the winter. (Kent Harris/Stars and Stripes) 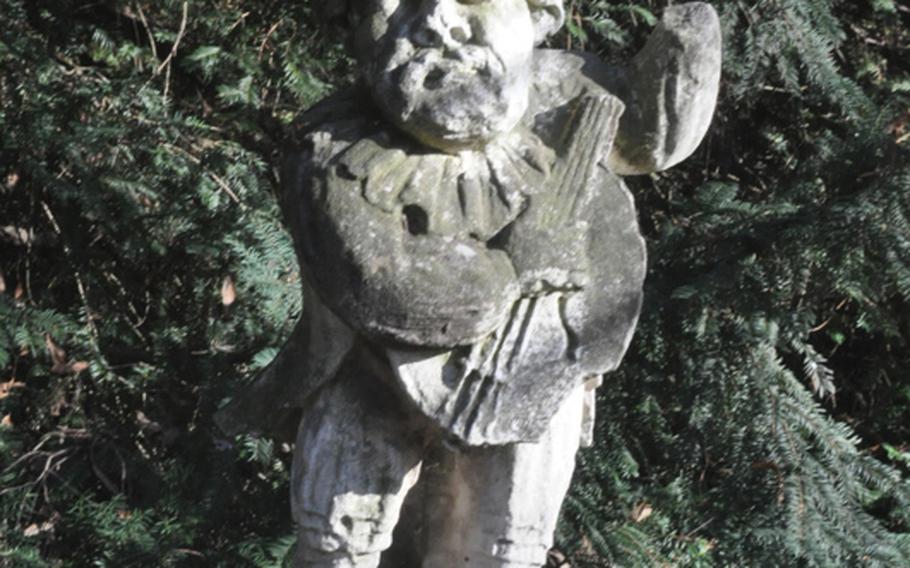 Buy Photo
This sculpture of a minstrel sits near the entrance to the labyrinth at the Villa Pisani Nazionale complex in the town of Stra, Italy. There are hundreds of statues in the gardens. (Kent Harris/Stars and Stripes) Buy Photo
The Villa Pisani Nazionale, in the town of Stra, Italy, between Venice and Padova, was once owned by Napoleon Bonaparte and served as the first meeting place in Italy between Benito Mussolini and Adolf Hitler. Today, visitors can check out about 30 of its more than 100 rooms and tour the expansive gardens. (Kent Harris/Stars and Stripes) For a time, it was one of the most prominent homes in northeastern Italy.

Napoleon sold it to the Hapsburgs, who used it as a part-time residence to invite nobility from all around Europe when they weren&rsquo;t running their vast empire.

No one really has called the villa in Stra, Italy, home since the country&rsquo;s unification in the 19th century, though. Today, it&rsquo;s a national museum, a place where visitors can tour about 30 of the more than 100 rooms in the main villa, explore the vast gardens and maybe &mdash; with a little imagination &mdash; step back in history.

The villa was built by the Pisani family in the early 18th century. It&rsquo;s still considered by many to be the jewel of the Brenta Riviera, a waterway that connects Stra to Venice. Many prominent Venetian families built villas along it as part-time residences. Travelers along the SR-11 can still catch glimpses of several of those. But most people passing between Venice and Padova take the A4 autostrada a few miles away.

The villa in Stra attracts about 150,000 visitors a year and many of those come during the warmer months. During a recent visit, there were only a handful of visitors taking the self-guided tour or strolling through the park. Part of that is due to the seasonal closure of one of the villa&rsquo;s most popular attractions: the labyrinth. Free to those who pay admission to the gardens, it&rsquo;s closed from November through February.

Other parts of the expansive gardens are open all year, though. There&rsquo;s a long pool that extends from the villa to buildings that once served as both stables and a banquet hall. Leaf-strewn paths crisscross forested areas. Hundreds of statues, many in need of some touch ups, dot the landscape. There is also a handful of small signs, in both Italian and English, that tell the history of different areas of the parks.

Visitors often start with a tour of the second floor of the villa, which is open to the public. There are about 30 rooms to visit, though only a few are fully furnished. Each room has excellently written guides in Italian, German, French and English that explain its past use or some history of the villa.

The most impressive room is the ballroom, which is near the end of the tour. It has the villa&rsquo;s most famous piece of art, a frescoed ceiling painted by Giambattista Tiepolo. Perhaps more impressive than the painting, though, is the sheer size of the room. Most people&rsquo;s homes could fit inside it.

The quickest way to reach Villa Pisani Nazionale from the U.S. military communities of Aviano and Vicenza is via the A4 autostrada. It&rsquo;s only about 12 miles from Vicenza and an hour&rsquo;s drive from Aviano. Take the Sacile-Est exit and follow the signs for the SR-11 toward Venice. Ignore the sign for the center of Stra and continue on the SR-11 toward Venice. The villa is on the edge of town. Those with time to spare can get a more scenic view by avoiding the highway and taking the SR-11 that largely follows the Brenta River/canal from Stra to the SS-13 near Venice. But traffic can be heavy and there are several stoplights along the way.TIMESThe villa is open from 9 a.m.-7 p.m. in the summer and closes earlier in October (9 a.m.-5 p.m.) and November through March (9 a.m.-4 p.m.). It&rsquo;s also closed on Mondays and on some holidays.COSTSAdmission to both the villa and the gardens is 7.50 euros for adults, 4.50 for those underyounger than 18 or those interested in seeing only the gardens. It&rsquo;s free for European Union citizens younger than 18 and older than 65 and discounted for EU students. Parking is free in a gravel lot just off the SR-11 outside the villa. FOODThere&rsquo;s a cafe in the gardens for lunch or snacks. Have an espresso for 1 euro, a soft drink or a glass of wine for 3 euros. Various types of sandwiches cost 1.50 euros to 4 euros, slices of pizza are 3.50, salads 4.50 and desserts are 3.50. There are also several restaurants in Stra and a host of them along the SR-11, especially between Stra and Venice. INFORMATIONVisit WWW.villapisani.beniculturali.it/en/index.php in English and Italian). Phone: or call 049 502074 (English might not be spoken).