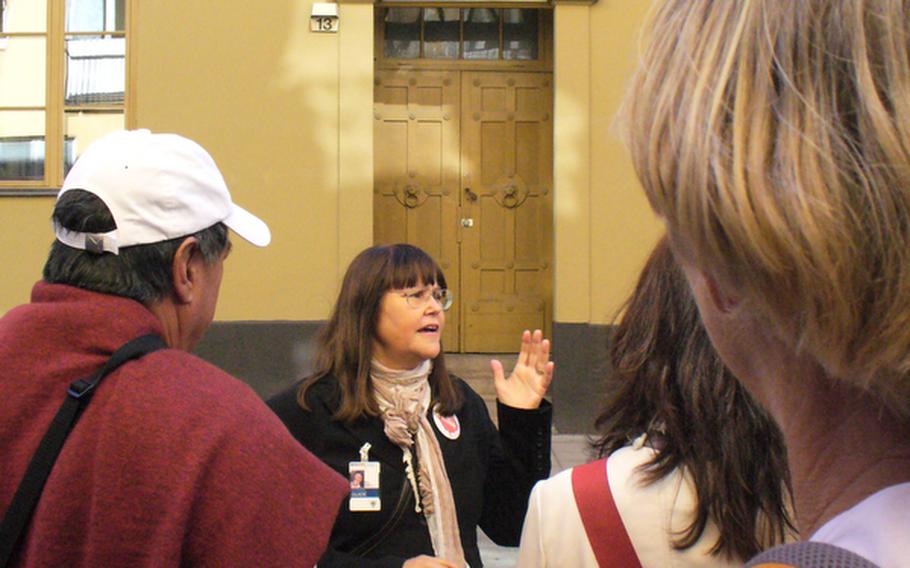 Buy Photo
Mia Freitag, guide for the Millennium Tour of sites mentioned by author Stieg Larsson in his Millennium trilogy, pauses in front of Stockholm's Adat Jisrael Synagogue. The synagogue was used as the meeting place for Detective Inspector Jan Bublanski and Milton Security chief executive officer Dragan Armanskij in the Millennium trilogy. (Jayne Traendly/Special to Stars and Stripes)

Buy Photo
Mia Freitag, guide for the Millennium Tour of sites mentioned by author Stieg Larsson in his Millennium trilogy, pauses in front of Stockholm's Adat Jisrael Synagogue. The synagogue was used as the meeting place for Detective Inspector Jan Bublanski and Milton Security chief executive officer Dragan Armanskij in the Millennium trilogy. (Jayne Traendly/Special to Stars and Stripes) Buy Photo
A patron at the 7-Eleven on Gotgatan 25, where Lisbeth Salander stocks up on groceries in the book and film "The Girl with the Dragon Tattoo," relaxes in the afternoon sun. (Jayne Traendly/Special to Stars and Stripes) Buy Photo
The actual entrance to Bellmansgatan 1 in Stockholm where fictional character Mikael Blomkvist lives is from a walkway over the street. (Jayne Traendly/Special to Stars and Stripes) 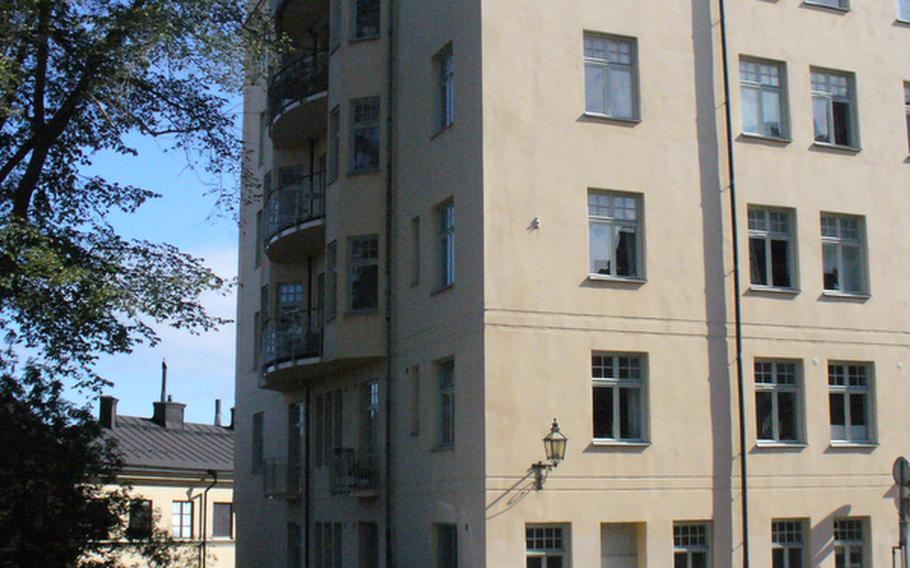 The building at Fiskargatan 9, seen here, in which Lisbeth Salander buys her luxury 21-room apartment in "The Girl with the Dragon Tattoo," was built in 1910 and has a beautiful view of Stockholm. The building won't be seen in the Hollywood remake of the movie because its facade was undergoing renovations at the time of filming. (Jayne Traendly/Special to Stars) 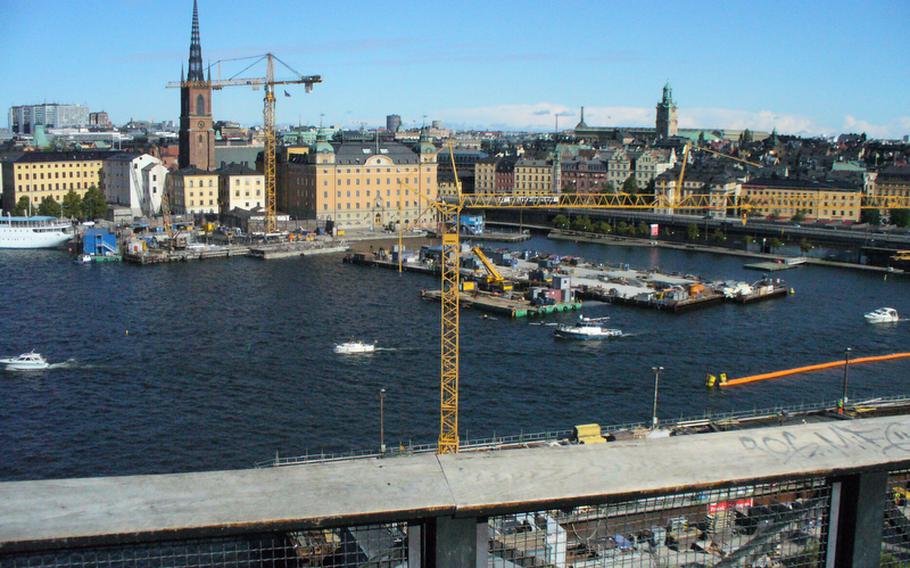 Buy Photo
Views from the apartment of fictional journalist Mikael Blomkvist of “The Girl With the Dragon Tattoo” include the water and the Old Town, or Gamla Stan, in Stockholm. The thriller is part of Stieg Larsson’s posthumously published trilogy, “The Millennium Series.” (Jayne Traendly/Special to Stars and Stripes)

Fans of Swedish author Stieg Larsson&rsquo;s book &ldquo;The Girl With the Dragon Tattoo&rdquo; and the other books in the &ldquo;Millennium&rdquo; trilogy are so enthusiastic, they brave freezing weather to take Stockholm&rsquo;s official Millennium walking tour.

At the start of a recent tour, on a sunny, warm fall day, Freitag, a self-described Millennium &ldquo;freak,&rdquo; gathered 30 visitors in front of Bellmansgatan 1 on Mariaberget, the apartment building in which the main character, journalist Mikael Blomkvist, lives.

They&rsquo;ve come from all over the world &mdash; Ireland, Spain, Mexico, Australia, Germany, Austria, the United States and Sweden &mdash; to follow her through the city district of S&ouml;dermalm and experience the Millennium locations depicted in the books and films, as well as learn some city history.

&ldquo;When people read the books, they don&rsquo;t get a lot of information about the surroundings,&rdquo; Freitag explained. &ldquo;This is what the tour would like to add.&rdquo;

The Stockholm City Museum, which organizes the walk, estimates that since the summer of 2008, more than 35,000 people have followed in the footsteps of Blomkvist and cyberhacker Lisbeth Salander, either on the tour or on their own using the museum&rsquo;s Millennium map.

Phil Eubanks and his wife, Marylou, visiting on business from Sycamore, Ill., wanted to see a part of Stockholm that wasn&rsquo;t a palace or a museum; somewhere, said Phil Eubanks, where the &ldquo;real&rdquo; people lived.

Accustomed to fans wandering their streets, residents pay little attention to cameras aimed at apartments, offices, cafes, statues and a 7-Eleven featured in the trilogy.

Around the corner from Blomkvist&rsquo;s apartment is the Monteliusv&auml;gen, a quarter-mile walking path from which we got a sweeping view of the bay of Riddarfj&auml;rden, including the islands of Gamla Stan and the Kungsholmen.

And when Salander moves into her 21-room luxury apartment on the top floor of Fiskargatan 9, she also has a stunning view, this one of Djurg&aring;rden island and the Bay of Saltsj&ouml;n (the group got a ground-level view from the yard of a nearby restaurant). Although Fiskargatan 9 is used in the book, Freitag informed us we won&rsquo;t see this building in the film, since its facade was undergoing renovation at the time.

Freitag took the opportunity here to slip in a story about another famous Lisbeth &mdash; Lisbeth Carlsdotter. In a nearby square, she became part of the S&ouml;dermalm story during the great witch trials of 1675 to 1677.

Fueled by superstition and church sermons on hell and the devil in the nearby Katarina Church, Lisbeth Carlsdotter and other young people accused several women of being witches who abducted children and flew off with them to the Brocken, the legendary witches&rsquo; mountain meeting place. The hysteria resulted in executions, with some of the accused burned at the stake. (Carlsdotter herself was later executed as a result of her false testimony).

The tour hits other sites mentioned in the trilogy, such as the Mellqvist Kaffebar on Hornsgatan, one of S&ouml;dermalm&rsquo;s biggest shopping streets. It&rsquo;s a favorite hangout of Blomkvist and his Millennium staff (and in real life was for Larsson himself).

On the semi-pedestrian street of G&ouml;tgatan is the (fictional) office of the Millennium editorial staff &mdash; at G&ouml;tgatan 11, in the film. Farther up the street is the 7-Eleven where Salander stocks up on Billy&rsquo;s Pan Pizza and Marlboro Lights.

Freitag also filled us in on Larsson&rsquo;s life. A journalist and editor in chief of Expo, an anti-right-wing-extremism publication, Larsson wrote the Millennium books hoping to ensure some sort of pension in his old age. He died of a heart attack in 2004 at age 50 and never saw the trilogy&rsquo;s success. Since then, the Larsson family and Eva Gabrielson, his longtime partner, have been in a legal deadlock over the literary rights to the books.

Who and what can be associated with the Millennium trilogy is tightly controlled by the Larsson family and the books&rsquo; publisher, Norstedt&rsquo;s. The Stockholm City Museum is the only organization authorized to give the Millennium Tour and to sell the Millennium map &mdash; that means no souvenir T-shirts, mugs, hats or posters.

Hopping into the Millennium phenomenon just 2&frac12; years after the original film was made, Columbia Pictures is releasing its own version of &ldquo;The Girl With the Dragon Tattoo&rdquo; Dec. 21. It stars Daniel Craig as Blomkvist and Rooney Mara as Salander.

How do the Swedes feel about a Hollywood remake?

On one point, however, she takes a stand: Mara is going to have a tough time measuring up to Noomi Rapace&rsquo;s award-winning acting.

Jayne Traendly is a Stars and Stripes columnist who lives in Wiesbaden, Germany.