Square dancing: In Europe, it’s hip to be square 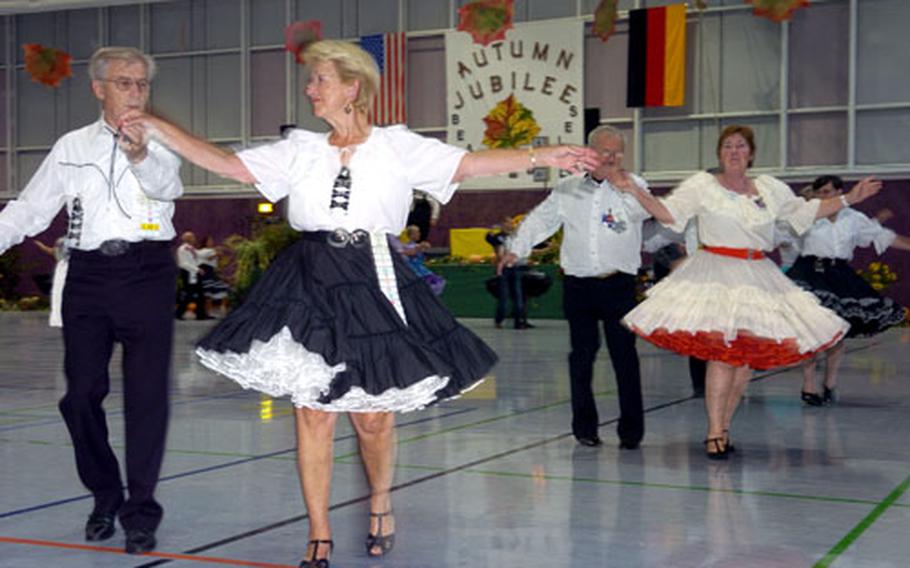 Couples dance the night away at the Beaux and Belles Square Dance Club’s Autumn Jubilee in Frankfurt, Germany, in September. European nationals have kept the traditionally American activity alive in areas where, in days gone by, American soldiers and Europeans used to dance and mingle. (Raymond T. Conway / S&S)

Couples dance the night away at the Beaux and Belles Square Dance Club’s Autumn Jubilee in Frankfurt, Germany, in September. European nationals have kept the traditionally American activity alive in areas where, in days gone by, American soldiers and Europeans used to dance and mingle. (Raymond T. Conway / S&S) 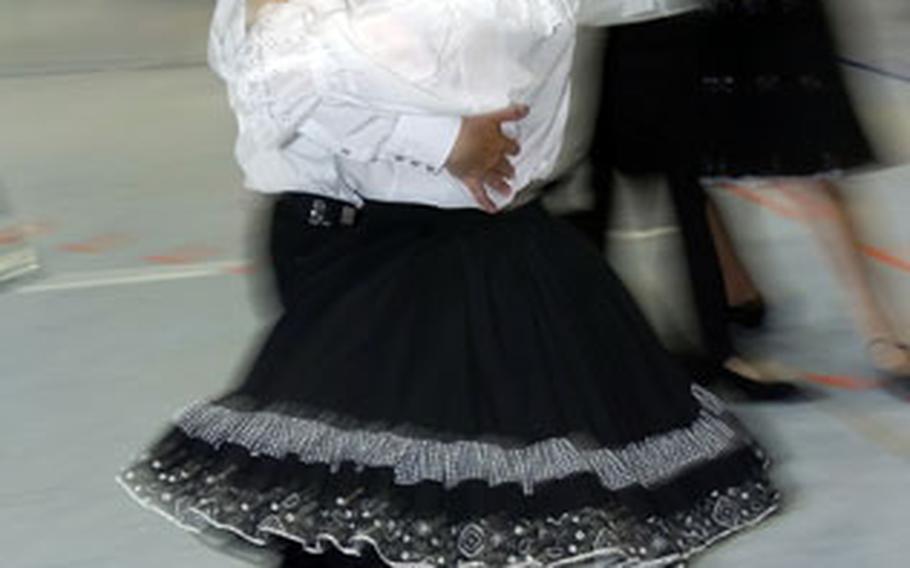 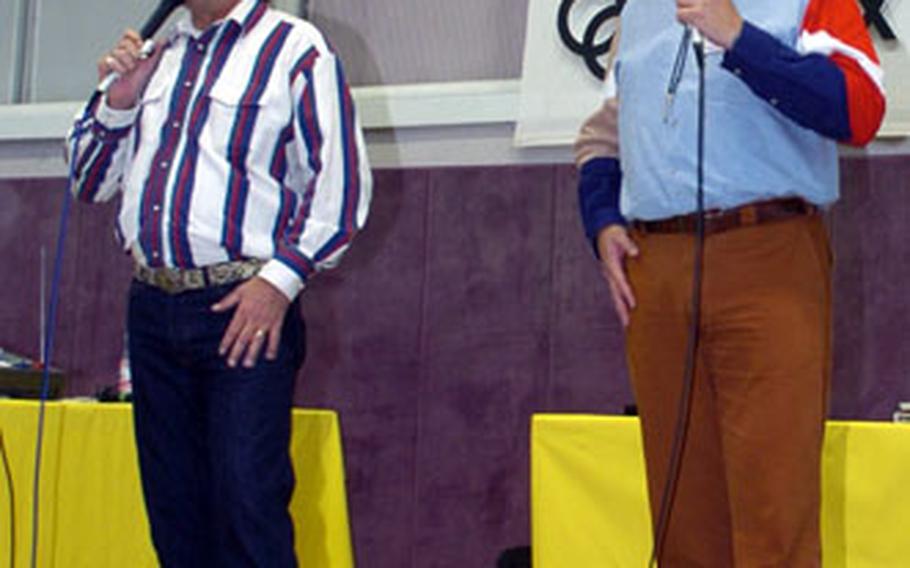 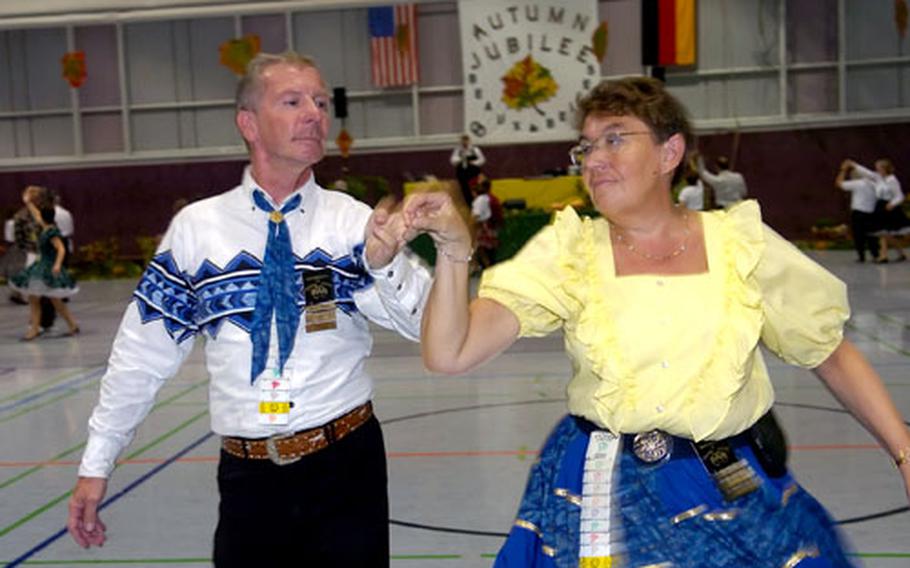 The state of square dancing in Europe these days is somewhat baffling, not unlike a caller with a stutter and a Cajun drawl.

One might assume that since Americans turned the Continent on to square dancing after World War II, interest in U.S. military communities would be high, as it was a couple of generations ago. And if anyone lost interest, the assumption goes, it would be the student, not the teacher.

But while some Americans still enjoy swinging a partner round and round, square dancing doesn&rsquo;t draw servicemembers as it used to.

Instead, it&rsquo;s the student &mdash; the Europeans &mdash; that has taken to half sashays and rollaways.

There are hundreds of square dancing clubs on the Continent. The United Kingdom, for example, has more than 200. Germany double that. And more clubs are springing up every year, particularly in Eastern Europe, which, according to aficionados, is quite fertile ground right now.

&ldquo;It&rsquo;s fun, the people, the clothes, the atmosphere,&rdquo; 40-year-old Karl-Heinz Schuchmann said last month during a dance in Frankfurt, Germany.

It would be misleading to claim this emblematic import from America is growing by leaps and bounds in Europe. But the fact is, despite the need for younger members, square dancing &mdash; and its close cousin, round dancing &mdash; remains a popular pastime for many Europeans.

The same can&rsquo;t be said for Americans living in Europe.

&ldquo;When I started calling here 20 years ago, we actually danced on the caserns.&rdquo;

Decades ago, hundreds of enthusiasts &mdash; from generals to privates &mdash; crowded into clubs to swing the night away. Women would come all dolled up in frilly blouses and prairie skirts or petticoats, while the men wore Western-style clothing, from cowboy boots to bolo ties.

According to Reese, Heidelberg, Germany, was the hub of square dancing in Europe, though by no means was it the only place.

From London to Paris, Vicenza to Bremerhaven, square dancing was quite the rage starting in the mid-1950s after Americans introduced it. In a sense, you could say it was a reintroduction, since the origins of square dancing are rooted in Europe, particularly in 17th-century England and France.

American immigrants gave it their own spin, but many of the dances more or less held true to their origins as folks moved West. The most significant contribution by the United States was the introduction of a caller, the person who cues the dancers to transition from one sequence of steps to another.

For generations, square dancing kept to its rural roots. Industrialist Henry Ford helped popularize it in the 1920s, but it didn&rsquo;t gain a foothold until Lloyd &ldquo;Pappy&rdquo; Shaw wrote &ldquo;Cowboy Dances&rdquo; on the eve of World War II.

After the war, square dancing grew in popularity in the United States. Servicemembers based in Europe founded clubs and turned their hosts onto it, and by 1955 the European Association of American Square Dancing Clubs was founded. The EAASDC celebrated its 50th anniversary in September.

&ldquo;In the States, it needs to be rejuvenated, from what we hear, but over here it is growing,&rdquo; said John Sanderlin, founder of the Texas-Armadillos in Heidelberg. &ldquo;It&rsquo;s one of the largest organizations of its kind in Europe.&rdquo;

There are an estimated 9,000 clubs worldwide, from Norway to New Zealand. There are already three clubs in Russia and more than 300 in Japan.

Square dancing requires at least four couples, though there is typically more than one, four-couple square of dancers on the floor. The dance itself is based largely on the steps of traditional folk dances, such as the Morris, English Country, Contra and Quadrille, a French word that means foursome.

Some square dancing events, especially larger ones in Europe that draw participants far and wide, can span three days. Reese said a dancer attending one of these events could cover a distance of 20 miles by the time it&rsquo;s over just by dancing.

&ldquo;A lot of people don&rsquo;t realize the fitness aspect to it,&rdquo; he said.

Square dancing also requires concentration, which is why no alcohol consumption is allowed until after the petticoats stop twirling.

&ldquo;It&rsquo;s very good for the mind,&rdquo; said Christiane De Keyser, a 56-year-old Belgian who, along with her husband and another couple, drove nearly 300 miles to attend the dance in Frankfurt last month.

&ldquo;When you drink, your mind is not so clear,&rdquo; she said. &ldquo;The other people in the square are relying on you.&rdquo;

Despite the prohibition, the socializing that goes on is one of the draws. In the decades following World War II, square dancing was a way for soldiers to get acquainted with the locals.

But over time, U.S. participation waned. Because servicemembers rotate assignments every few years, it was the locals who provided the continuity, Sanderlin said.

A check of several U.S. installations in Germany found not one that serves as a base for an organized club.

People like Reese and Sanderlin are willing to help people, couples or communities get started. While there is some interest, Reese admits, things aren&rsquo;t swinging like they used to.

Anyone interested in taking the first steps in organizing or revitalizing a square dance club in Europe can contact Kenny Reese or John Sanderlin for help.

Sanderlin, founder of the Texas-Armadillos club in Heidelberg, can be reached at famsanderlin@t-online.de or by telephone at (+49) (0)6221- 782408. The club&rsquo;s Web site is www.texas-armadillos.de.vu.

For a list of clubs in 10 European countries, see the European Association of American Square Dancing Clubs, www.eaasdc.de.

Information on the European Teachers and Caller Association is at www.ecta.de.