Special delivery: Combination of factors worked to save baby's life at Yokota 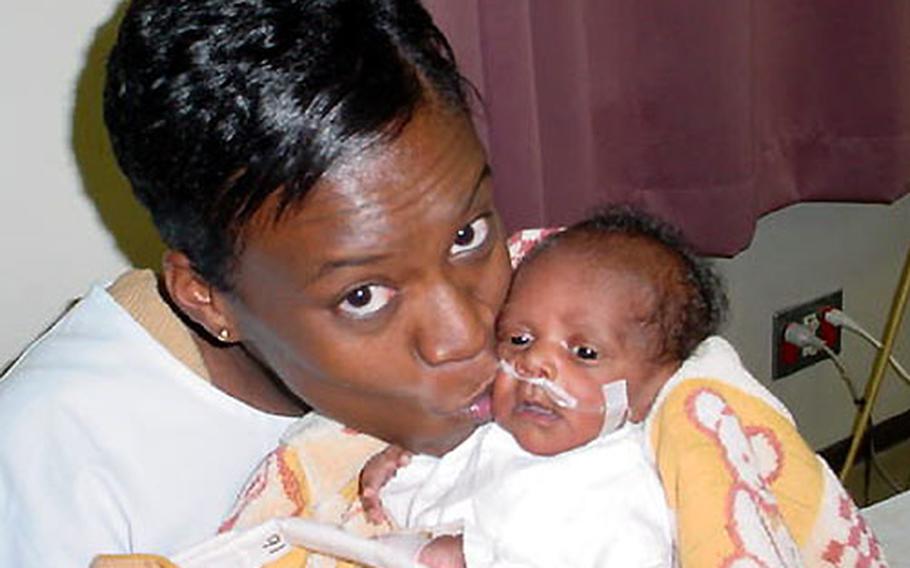 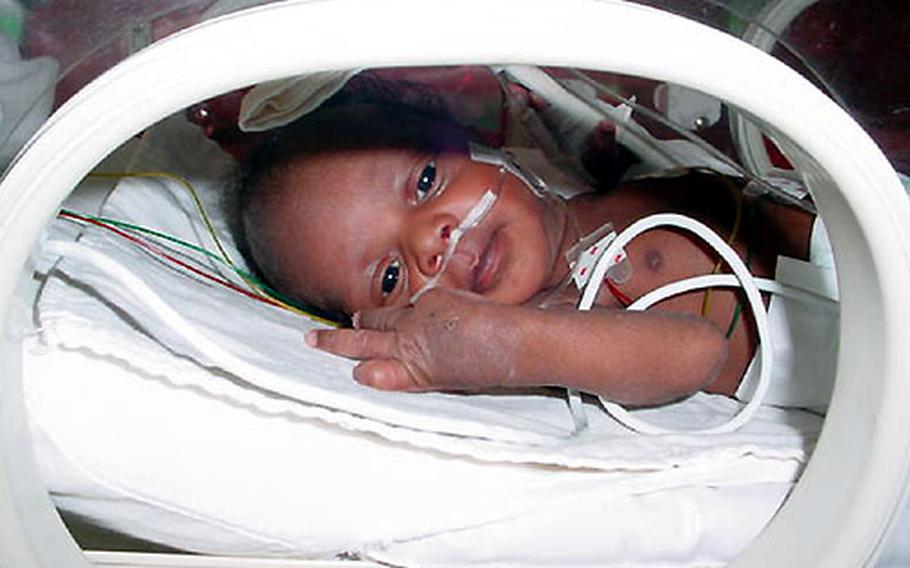 Kayden Niles Wilson spent the first days of his life in an incubator at Hachioji Pediatric Hospital after being born more than two weeks premature at Yokota Air Base. Doctors at Yokota opted to deliver 4.5-pound Kayden via emergency Caesarean section after his heartbeat did not respond to a routine test. (Photo courtesy of Staff Sgt. LaToya Wilson)

YOKOTA AIR BASE, Japan &#8212; Call it maternal instinct, luck, quick action by doctors, or a hand from above.

Staff Sgt. LaToya Wilson likes to think it was a combination of all four that saved the life of her premature baby boy on Sept. 16.

For the 32-year-old first-time, single mother, it was nearly a repeat of the unthinkable: Wilson had lost a baby eight years ago, born dead at 32 weeks. An autopsy did not reveal cause of death, but Wilson said the umbilical cord was wrapped around that baby&#8217;s neck.

Considering her prior history, doctors at Yokota began monitoring Wilson and her baby&#8217;s progress at 28 weeks. She had regular appointments twice a week, including Sept. 16, when she was 34 weeks and six days into the pregnancy.

Wilson knew something was wrong that day, even though she could still feel the baby moving inside her belly.

Doctors monitored the infant&#8217;s heartbeat for about an hour and grew alarmed by the results.

The doctors told Wilson they wanted to deliver the baby as soon as possible to find out what was wrong.

Agreeing to the emergency Cesarean section was an easy decision, Wilson said.

&#8220;One thing that kept me going was his heart was still beating. I kept the faith and figured he had a better chance of surviving outside than inside&#8221; the womb.

Baby Kayden was delivered at 4:38 p.m. Sept. 16, a little more than two weeks&#8217; premature. Though it appeared the baby&#8217;s air supply was cut off by a pinched umbilical cord, Wobser said brain damage was not evident.

Kayden was resuscitated and immediately whisked to an ambulance from Hachioji Pediatric Hospital, which was standing by to transport the 4.5-pound baby to its neo-natal intensive care unit. Yokota&#8217;s hospital was not equipped to care for such a premature baby, doctors said.

The baby is still about 4.5 pounds. He drinks Wilson&#8217;s breast milk from a bottle; she visits him several times a day while on convalescence leave from her job with the 605th Air Intelligence Squadron at Yokota.

Two weeks ago, she was able to hold him outside the incubator for the first time.

The Japanese doctors tell Wilson the baby will be ready to go soon depending on his progress. When he is able to finish a bottle of milk on a regular basis, that&#8217;s a good sign that he&#8217;s ready to be with his mother full time.

&#8220;I want to thank them for acting so quickly and listening to me when I was telling them I thought there was something wrong.&#8221;