SnoBoCross: The Movie? Get Kutcher’s agent on the phone! 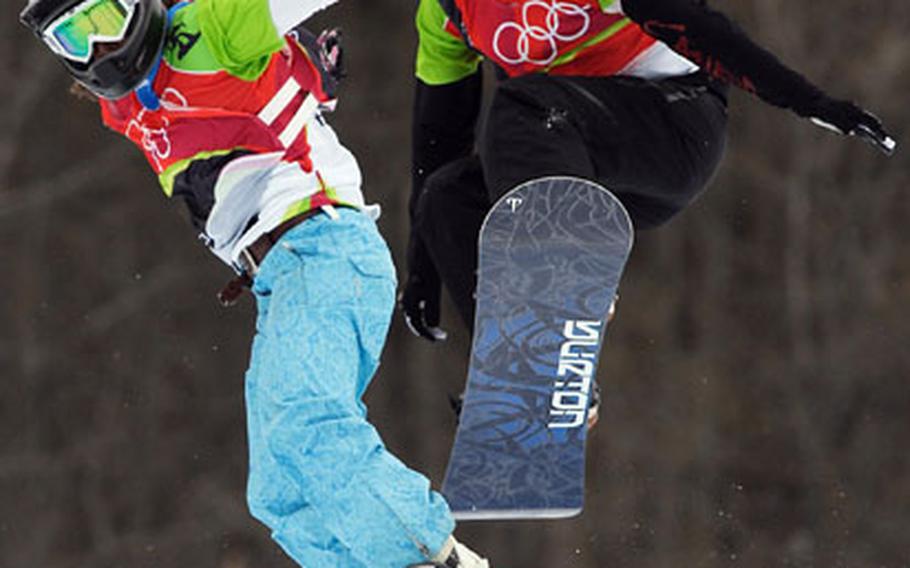 And why not? It&#8217;s a Hollywood movie that writes itself. Picture this:

That guy with the really deep voice who does all movie trailers begins.

Are you with me? So this group of sexy, young American men and women Olympic hopefuls are doing time trials and other sexy, interesting things in a former Eastern bloc country &#8212; let&#8217;s say, Bulgaria. By day they snowboard. By night, they attend formal dinners with hundreds of impossibly sexy people, and we get a chance to throw in a dance scene.

JESSICA BIEL &#8212; Ashley Saucy, Colby&#8217;s &#8220;Betty,&#8221; and top female U.S. snowboarder. Her snowboarding brother has been in a wheelchair since a crash in Salt Lake City when he was bumped by a Russian snowboarder named Ivan Yeltsin and fell 38,000 feet down a ravine.

SEANN WILLIAM SCOTT &#8212; Race Charger. Even more hot-dogging than Colby, who tells him at several points in the movie that his recklessness &#8220;coulda got us all killed!&#8221;

50 CENT &#8212; Ice Washington, the snowboarder from South Central who&#8217;s one misdemeanor away from going back to the Big House and who has to prove himself at every turn. He loves &#8230;

WILLEM DAFOE &#8212; The evil Dr. Klaus von Dunder, the former KGB agent and Colby&#8217;s real father, who is trying to steal the formula for the super-advanced X-50 snowboard lubricant. The formula is contained in a microchip, implanted in Colby&#8217;s hair. Its owner would &#8212; dare I say it &#8212; rule the snowboarding world.

JACK BLACK &#8212; the American team&#8217;s blind, audibly flatulent, blues-loving computer whiz who drifts in and out of an Australian accent.

After about 80 minutes of fairly nonsensical dialogue, punctuated by scenes of cool snowboarding things, we come up at the top of some Alp or something.

Suddenly Sasha appears and seductively tells Colby and the others that Ashley&#8217;s been abducted, and that they&#8217;ll never get to the ski lodge and rescue her before the bomb that&#8217;s strapped to her forehead detonates! She laughs menacingly and starts down the hill. Colby and the gang follow! The race is on!

From out of nowhere come some KGB agents with automatic weapons! Dodging gunfire, our heroes do amazing jumps and twists and flips! A KGB agent skis into a tree and explodes!

Dr. von Dunder appears over the horizon in a helicopter gunship! He&#8217;s got Colby dead to rights. Von Dunder hesitates for an instant when, in his high-powered sights, he sees Colby mouth &#8220;Dad?!&#8221;

Coach Gruff screams &#8220;Nooooooooo!&#8221; in super slo-mo, and fires a rocket launcher that he always snowboards with, blowing von Dunder out of the sky! We see the explosion from 12 angles over 7 seconds!

Back to the chase! Colby catches up with Sasha and nudges her. We see the terror in her eyes as she goes off the slope &#8212; into a 97,000-foot ravine! No sequel for you!

The kids finish off the baddies, knocking them silly in midair martial arts battles, and they shwoosh into the lodge, where they find Ashley tied to a chair &#8212; the bomb seconds from detonating. Courtney leaps into action. But what wire to cut?

Forgetting for one moment her lifelong crush on Colby and jealousness of Ashley, she cuts the black wire, and collapses on the floor. Ashley and Colby hug. Music swells. Everybody cries!