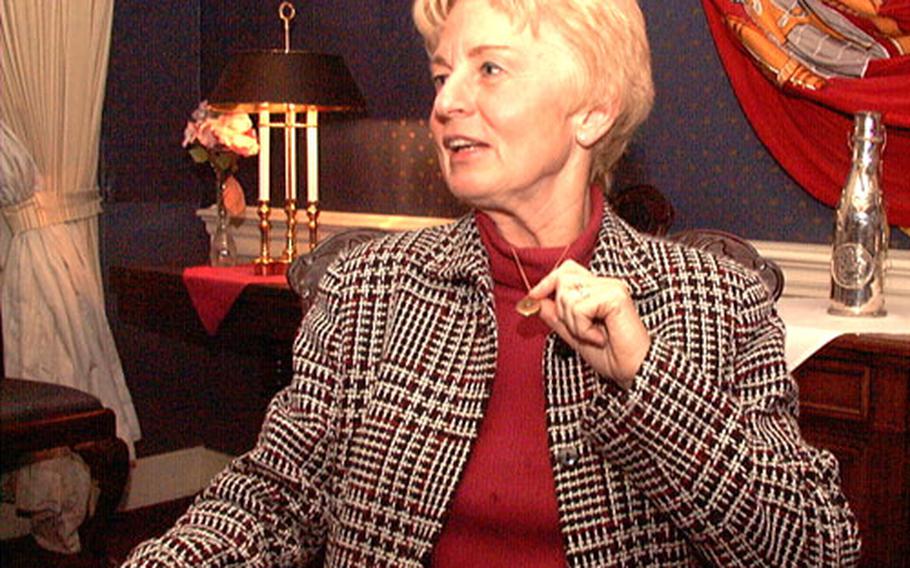 Silke Hagee talks about life in postwar Germany, the Marine Corps and being the wife of the new commandant, Gen. Michael Hagee. (Sandra Jontz / S&S)

Silke Hagee talks about life in postwar Germany, the Marine Corps and being the wife of the new commandant, Gen. Michael Hagee. (Sandra Jontz / S&S) 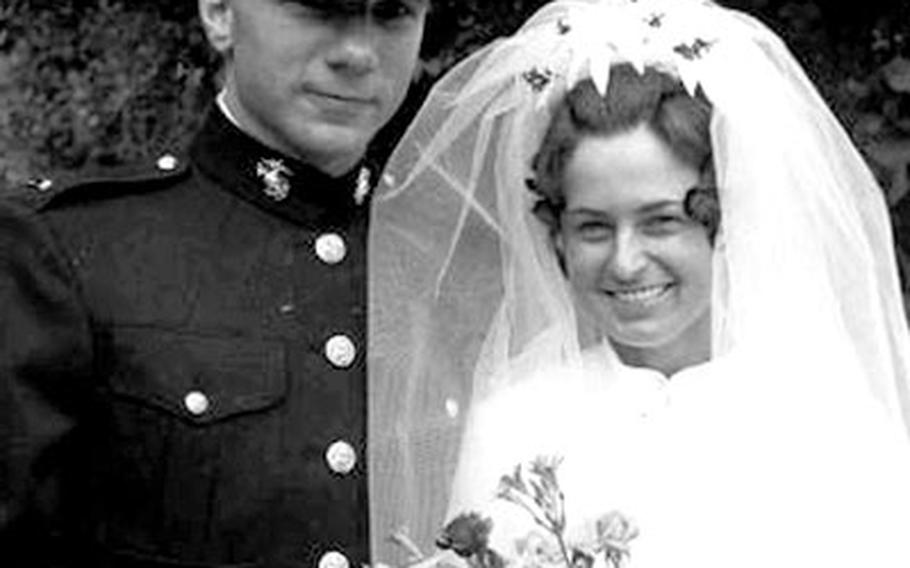 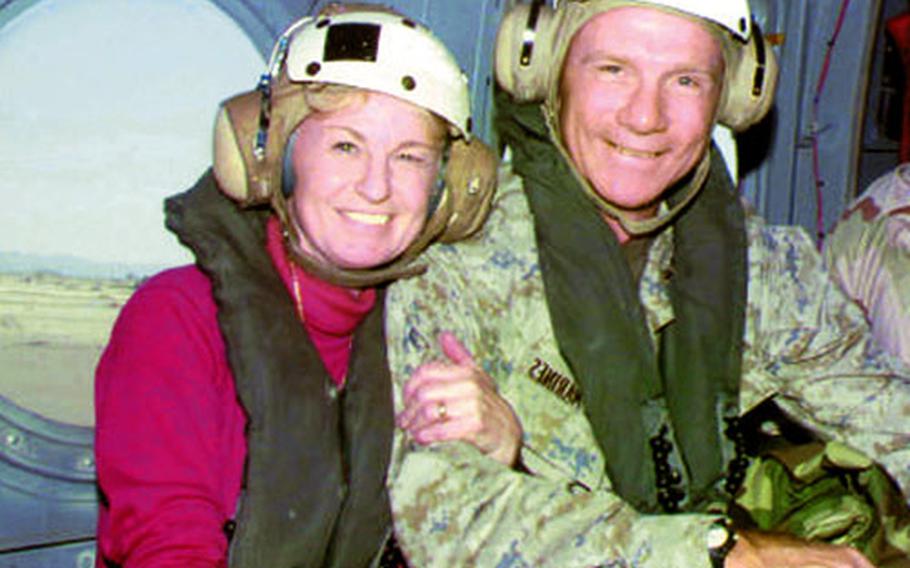 ARLINGTON, Va.&#8212; For Silke Hagee, it&#8217;s bravery she sees each time she looks at a tearful young wife whose Marine husband deploys.

She has consoled that anguished 19-year-old woman married a mere three weeks, all the while marveling at the young wife&#8217;s fortitude, Hagee recounted during a recent interview.

Each time, Silke Hagee, wife of new commandant Gen. Michael Hagee, catches a glimpse of herself in the tears of that frightened newlywed.

The couple has endured at least two long-term separations in their 33-year marriage &#8212; and both because of war.

She coped the one way she knew how.

It was a bit of a fairy-tale first encounter between Silke (pronounced Silk-ah) Boie and Michael Hagee.

The two met at an embassy ball on a March evening in 1968.

Her father, German Air Force Brig. Gen. Werner Boie, was the defense attach&#233; at the German embassy in Washington. Her future husband was a midshipman at the U.S. Naval Academy who had a keen interest in Germany.

The two went on a few dates. Then he graduated and moved to California; but visited that Labor Day weekend. Her father&#8217;s tour ended, the family then moved to Germany. Mike Hagee made a visit there for two weeks that December.

Then her husband of nine months shipped off to Vietnam.

To occupy her time, she went back to college to get a degree in education, but didn&#8217;t enter the workforce until her youngest child was 5 years old.

At the time, she still was not a naturalized U.S. citizen and the public school system would not hire her.

&#8220;You name it, I&#8217;ve done it. I&#8217;ve worked in insurance, I&#8217;ve worked in a pension plan consulting company, and my last job was actually with a Germany machine tool company and I worked for the subsidiary [in the States]. I did different jobs. I was spare parts manager for a while and then I became executive assistant.

&#8220;And &#8230; I&#8217;ve been a housewife. I have worked in between, but my major mission in my life was always to support my husband. Today a lot more wives work and have careers and have to juggle all that. But I think that is where our support systems come in and can help out a lot.&#8221;

Hagee, 54, said she&#8217;s humbled by the &#8220;awesome&#8221; responsibility of being first lady of the Marine Corps. She has yet to detail the goals that will define her tenure, but plans to promote volunteer programs and tackle quality-of-life issues.

One includes the Corps&#8217; push of a program called Public Private Venture, a partnership between the military and a private company that will build, revitalize, repair and own housing units on land owned by the military.

&#8220;When we first arrived at Camp Pendleton &#8230; we had a tour of the housing and we saw some of the really old stuff and, I mean, it hurts you. It really hurts you. And these houses still exist today and still are being inhabited. Windows you could not see through, there was condensation between the windows and you can&#8217;t see out. And the floors, 10 different kinds of linoleum.

&#8220;I personally have a feeling, and there is no proof in this, I even feel spousal abuse could go down. If the spouse is in an environment during the day where she feels comfortable then she can cope with whatever is going on during the day and she won&#8217;t overload him when he gets home.

And she plans to fret over the ones who aren&#8217;t Marines at all.

&#8220;Another area I&#8217;d like to concentrate on, I mean all the little programs will get attention, but education for the military child is very dear to me. &#8230; There are still a lot of problems out there, like the military child transferring from one state to another, graduation requirements are different, the course offerings are different, varsity sports is a problem. A quarterback from somewhere goes as a senior somewhere else and they aren&#8217;t on the varsity team and his is in no man&#8217;s land.&#8221;

It&#8217;s a bit personal for her. The Hagees&#8217; two children, now grown, experienced the woes that accompany the military lifestyle.

A lack of educational opportunities for their daughter, Stephanie, kept Hagee in Annapolis in 1991, while her husband trekked across the country to assume leadership of the Corps&#8217; 1th Marine Expeditionary Unit &#8212; the second long-term separation.

Today, while the general is not deployed, he might as well be, she joked.

The demands on her husband mean the two share little alone time.

In the two weeks following the Jan. 13 change of command ceremony, the two dined alone maybe four times, she said.

And those times were because they&#8217;re new to the Washington circles, she joked.

Following an evening of hobnobbing, the two arrived home after 11 p.m.

When she recently left the families of the 1st Marine Expeditionary Force in Camp Pendleton, Calif., for her new life in Washington, she did so with a message characteristic of her warm and inviting personality.

She&#8217;s always preached an open-door policy with Marine families, and being the commandant&#8217;s wife won&#8217;t change that, she promised.

She was born in Munich and lived there for 10 years before moving to the Cologne area.

Her music teacher had a different instrument in mind.

Her now brother-in-law played for her a cello concerto by renowned French cellist Pierre Fournier.

She embraced the idea of playing with others in orchestras and chamber groups.

And now, another war looms on the horizon, and this time, her husband leads the service&#8217;s 220,000 active and reserve Marines.

Will she again have to work to compose herself at the airport? Will she see bravery in her own tears? How will she cope?