‘Shooting fish in a barrel’ 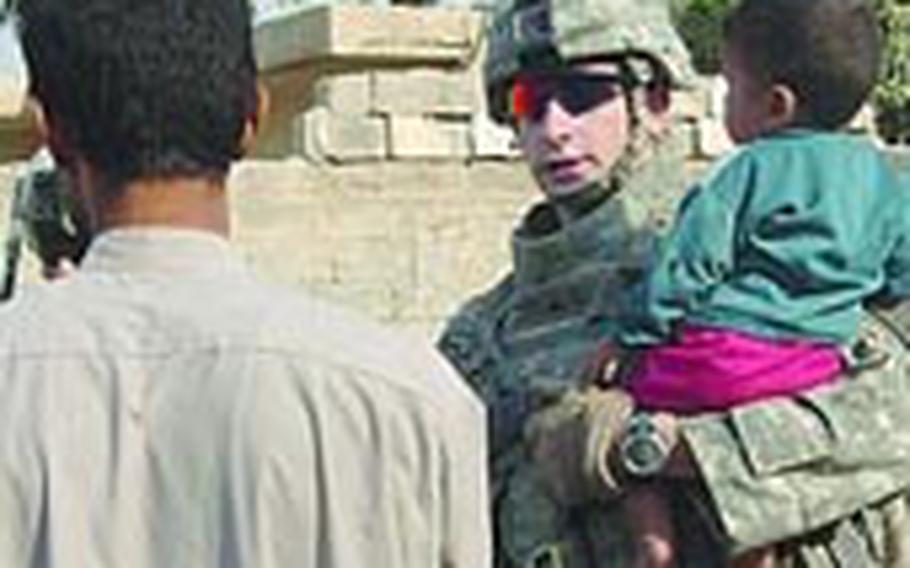 But the first boat patrol for Sgt. Ken Thomas, now a staff sergeant, and his troops ended up being their last river assignment after insurgents near Falahat lined up the banks to ambush his floating convoy on Feb. 16, 2007.

Thomas, a section sergeant with Troop C, 1st Squadron, 7th Cavalry Regiment, received the Silver Star in August for his actions during the battle that would ensue.

Only a few minutes into the four-boat patrol, Thomas, 23, of Utopia, Texas, heard a machine gun unload on the boats from the river&#8217;s shore.

Then, numerous insurgents popped out of buildings on both sides of the river and peppered the unconcealed blue boats with bullet holes.

"Bullets were everywhere. It was pretty wild," said the 1st Cavalry Division soldier, who figured there were close to 100 people firing at them. The soldiers had a gut instinct that the mission wouldn&#8217;t be a quiet cruise down the river, so they brought extra ammunition. Thomas estimated that he shot off at least 570 rounds from his M-4 rifle in the firefight.

He also lit up the shores with 600 rounds from the boat&#8217;s PKC machine gun after an Iraqi policeman ducked for cover when a bullet whizzed past his head, Thomas said.

"All you could hear was bullets hitting the boat," he said.

First Lt. John Dolan, Thomas&#8217; platoon leader in the lead boat, had no choice but to give the order to turn back. But it was too late for the first two boats.

While steering around, an Iraqi policeman driving Dolan&#8217;s boat was fatally shot in the stomach and fell against the wheel, making the boat veer toward an island where it ran aground.

Thomas&#8217; crew in the second boat went to help but his two-engine boat lost power when bullets destroyed one of its engines. The boat also got stuck in shallow waters, forcing the six soldiers to bail out into the polluted river.

Weighed down by roughly 80 pounds of combat equipment, the soldiers struggled to swim in the murky water to another island about 50 meters away, Thomas said.

"We were gasping and breathing in that crap," he said. "It was disgusting."

Once the lighter load freed up the boat, the Iraqi policemen transported those six soldiers from the island to shore. While still under fire, they ditched the boat and all took cover in a large hole on the 20- to 30-foot-high riverbank.

Staff Sgt. Allen Johns ordered Thomas to climb the steep, muddy riverbank and look for a way out while the rest hunkered down. As he climbed, Iraqis armed with AK-47 rifles as close as 50 feet away were taking aim and machine-gun fire continued from across the river.

"You could see them running outside their homes to shoot at us," he said. "They were shooting fish in a barrel."

At the top, Thomas saw a metal fence too high to scale. So, he pulled out wire cutters and began to cut away. What he didn&#8217;t know is that power lines shot in the firefight had fallen on the fence, electrifying it. He was also soaking wet from his unexpected swim.

"It shocked the hell out of me," he said of the fence. He ignored the painful electric jolts and hacked at the metal fence to make an exit. "I figured we better get off this bank or they&#8217;re going to start firing RPGs [rocket-propelled grenades]."

Thomas then pulled security as the crew made its way through the fence. The crew took cover at the closest home by kicking in its door. The Iraqi family in the home helped barricade the door while the crew gave first aid to each other.

"We were all cut up and banged up," he said.

Thomas and others headed up to the roof to pick off targets and provide security for a UH-60 Blackhawk helicopter snatching up Dolan&#8217;s crew stranded on the other island.

Thomas&#8217; crew soon realized that water had fried its radios and ammunition was running low.

"We started popping smoke so someone would find us," he said.

The soldiers finally spotted an Army convoy in the neighborhood and sent runners to retrieve them. The convoy didn&#8217;t have room for all of them, so Thomas, Johns and Spc. Jonathan Toth stayed behind.

Another convoy arrived later and helped the three soldiers scour the streets for the culprits. Their efforts were futile.

In all, 11 soldiers were wounded, one Iraqi policeman was killed and a few others were injured. Twenty-two insurgents were killed in the battle.

Thomas didn&#8217;t have to man a boat crew for the rest of his 15-month deployment. The mission was given to another unit.

"We never had boats again," he said. "Our first mission was a complete disaster."