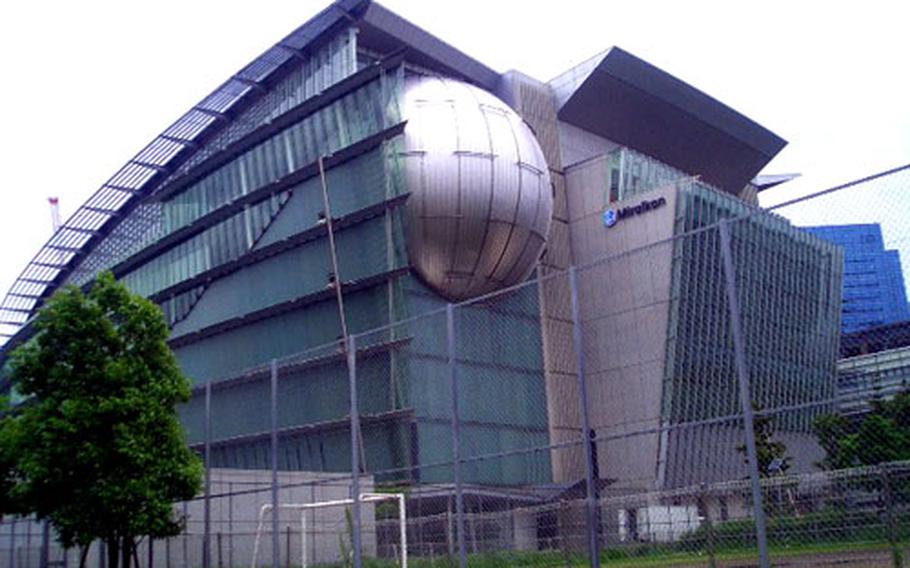 The National Museum of Emerging Science’s exterior is almost as cool as the inside. Called Miraikan, it is located in Odaiba, Tokyo. (Juliana Gittler / S&S)

The National Museum of Emerging Science’s exterior is almost as cool as the inside. Called Miraikan, it is located in Odaiba, Tokyo. (Juliana Gittler / S&S) 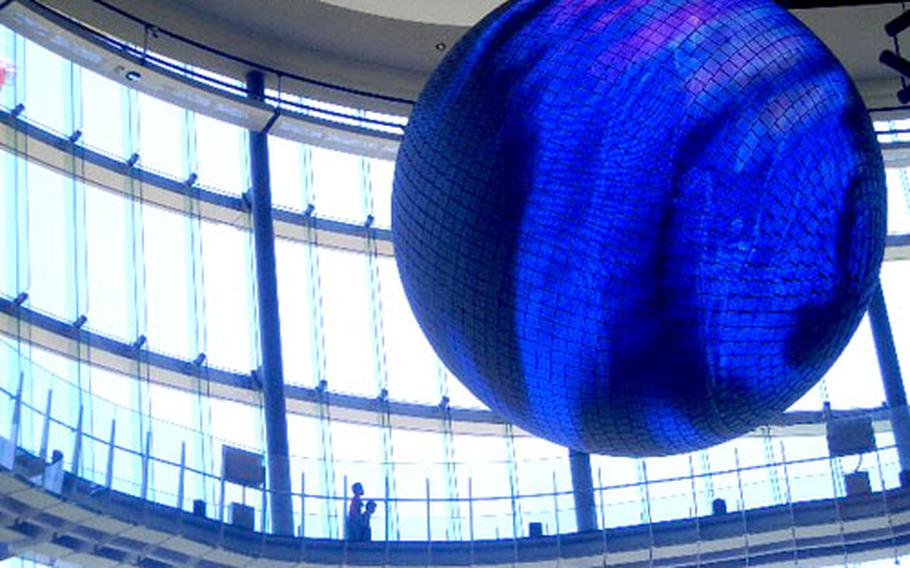 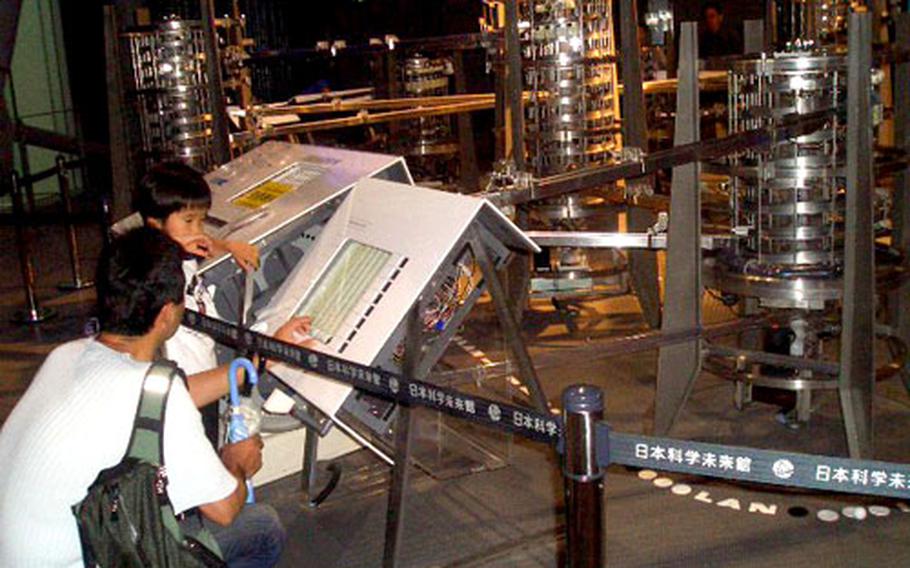 A model of the Internet uses black and white balls to replicate binary code. A pattern placed in one station will transfer mechanically through the system and be replicated at another station, in the same way the Internet functions. (Juliana Gittler / S&S) 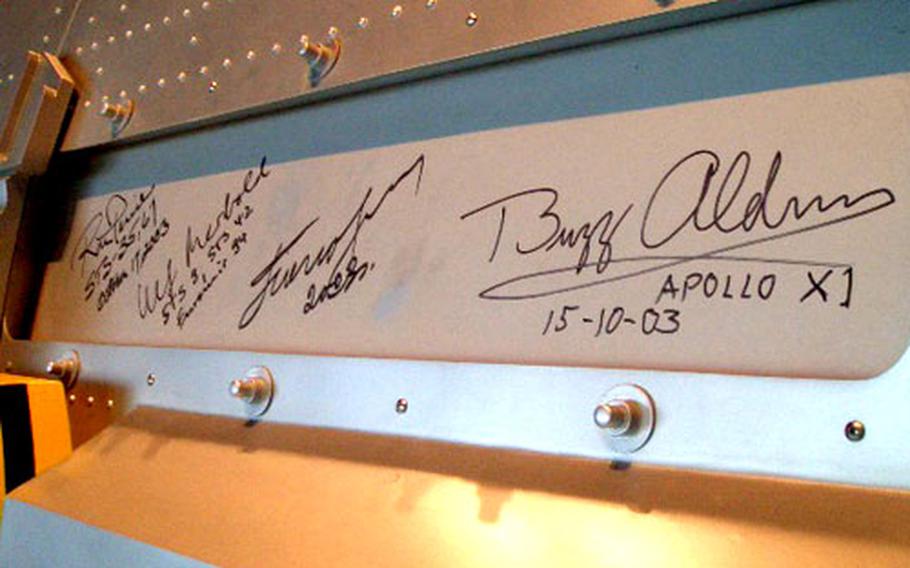 Outside the Space Habitation Module, a replica of a living area in a spacecraft, famous astronauts who have visited have left their mark. The museum’s executive director is Japanese astronaut Mamoru Mohri. (Juliana Gittler / S&S) 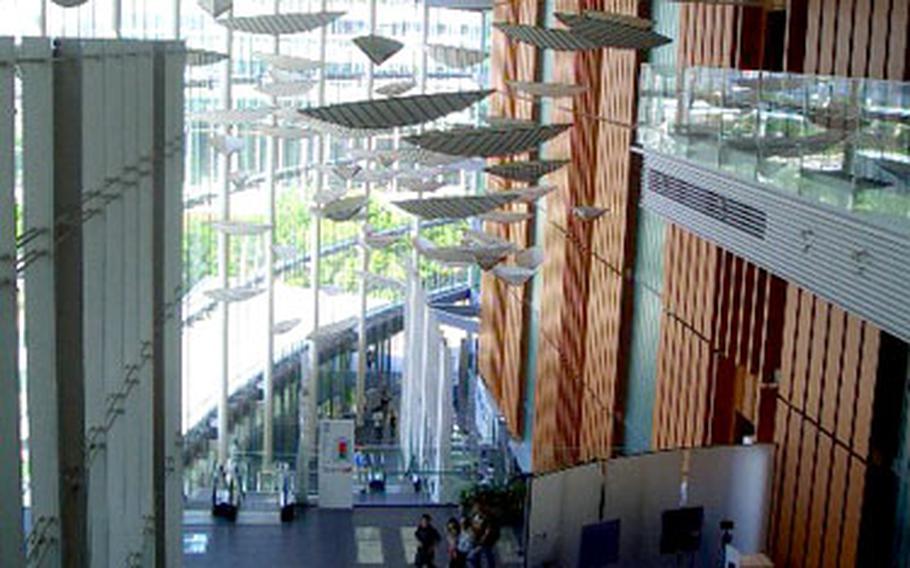 Sometime in the not-too-distant future, we&#8217;ll all be holding parties in our limousines cruising along at 200 mph without causing any environmental damage &#8212; at least if the folks at Keio University have anything to do with it.

It&#8217;s a tall order, but one already visible at the National Museum of Emerging Science and Innovation in Odaiba, one of Tokyo&#8217;s exhibition halls.

This is not just a place for the kids, although rest assured they will love it. The museum&#8217;s structure is easy to navigate &#8212; in English &#8212; well-presented and excitingly futuristic on its own.

Oh yes, they have the famous robots Asimo and Aibo. They have robots that navigate using vision &#8212; they see and respond to hand signals. They have another that&#8217;s soft and fluffy and serves a therapeutic value. They have a mini maglev train.

There are brains under microscopes, nanotechnology in action and virtual reality displays.

The museum&#8217;s hallmark hanging in the front is a massive globe containing nearly one million light emitting diodes (LEDs) and the world&#8217;s first spherical display device, according to the museum. The globe shows the earth&#8217;s temperatures, climate changes and appearance from space in a kaleidoscope of lights.

Each floor features demonstrations, videos and interactive models that aim to help visitors understand some of the most advanced elements of science.

A room-sized model illustrates how the Internet works using black and white balls on tracks to represent binary code. You can learn about micro-machines that perform surgery and see how astronauts would take a shower in a space habitation module that has been autographed by several famous astronauts.

The museum itself sits in another of Tokyo&#8217;s marvels &#8212; Odaiba, an island created from a landfill in Tokyo Bay and one of the most spacious areas in the city. The train over on the Yurikamome line glides under the Rainbow Bridge with sweeping views of the bay and Yokohama.

The museum has a well-stocked gift shop, a restaurant and a Wendy&#8217;s fast food restaurant attached.

And, for those who arrive just after the 10 a.m. opening and race to the sixth floor, the museum offers free shows in the six-sided Gaia dome theater including a planetarium with five million stars, according to the museum. Tickets for the three daily shows run out quickly.

The museum is open daily except Tuesdays, admission is 500 yen (about $4.40) for adults and re-entry is permitted. There are lockers on the ground floor and a caf&#233; on the fourth. Many of the volunteers speak English, and English floor maps are plentiful.

To get there, take the Yurikamome line from Shimbashi Station near Tsukiji or the Rinkai line and exit Tokyo Teleport Station.

For information, visit the museum&#8217;s Web site (in English) at www.miraikan.jst.go.jp.