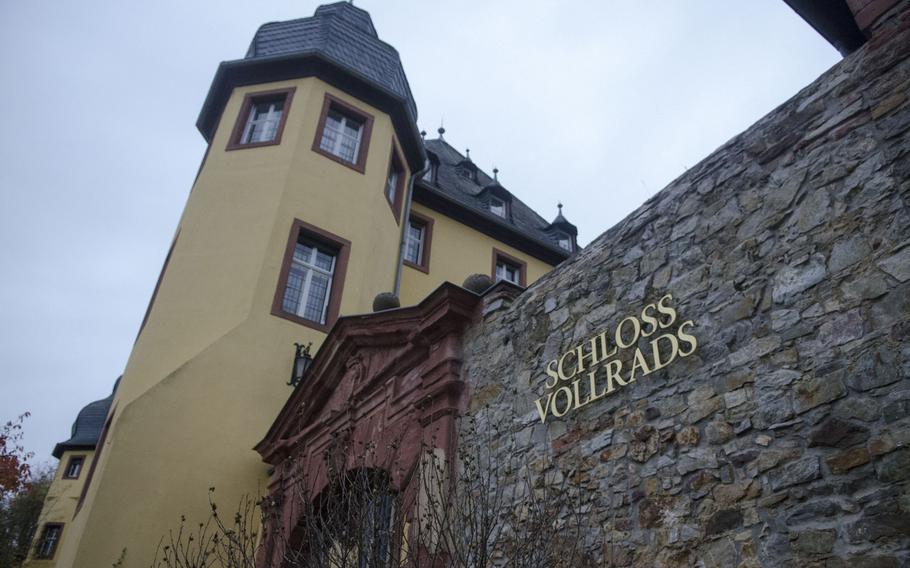 The entrance to Schloss Vollrads, a winery, historic site and event space which looms above the town of Oestrich-Winkel near Wiesbaden. The schloss, or palace, was originally constructed in the 1330s as the seat of the noble von Greiffenclau family. (Dan Stoutamire/Stars and Stripes)

The entrance to Schloss Vollrads, a winery, historic site and event space which looms above the town of Oestrich-Winkel near Wiesbaden. The schloss, or palace, was originally constructed in the 1330s as the seat of the noble von Greiffenclau family. (Dan Stoutamire/Stars and Stripes) 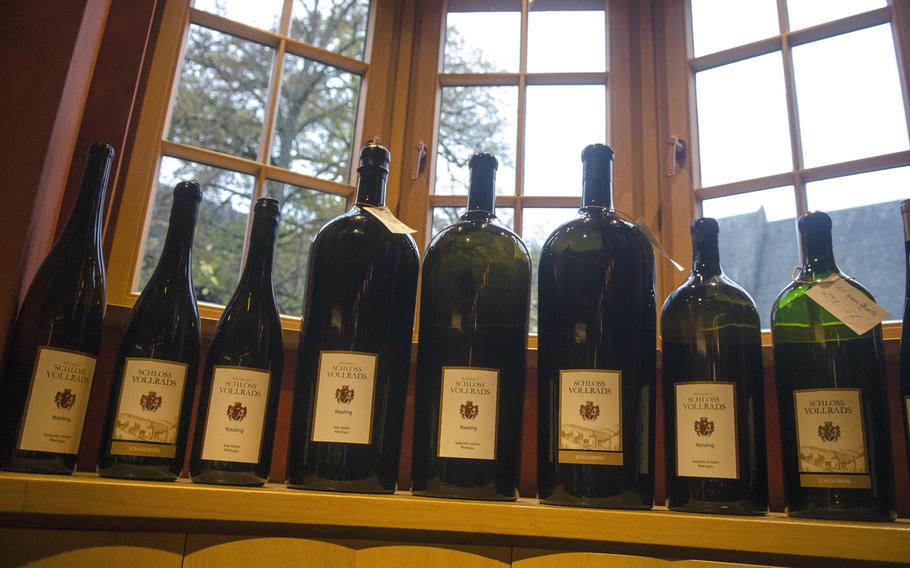 A display of Schloss Vollrads wines on display at the palace complex's modern wine-tasting pavilion. The palace in the town of Oestrich-Winkel near Wiesbaden has been producing wine for more than 800 years. (Dan Stoutamire/Stars and Stripes) 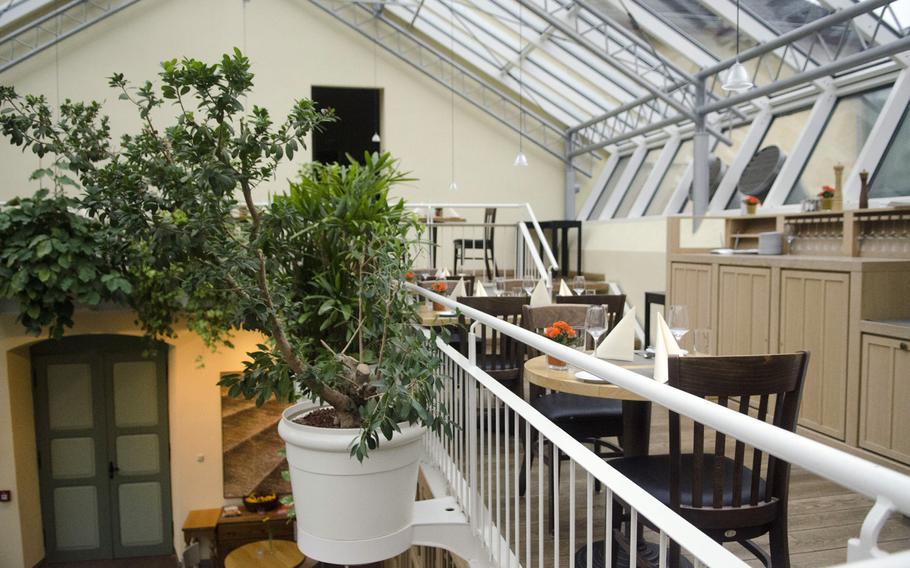 A view of the Orangerie, or covered outdoor restaurant, on the grounds of Schloss Vollrads. (Dan Stoutamire/Stars and Stripes) 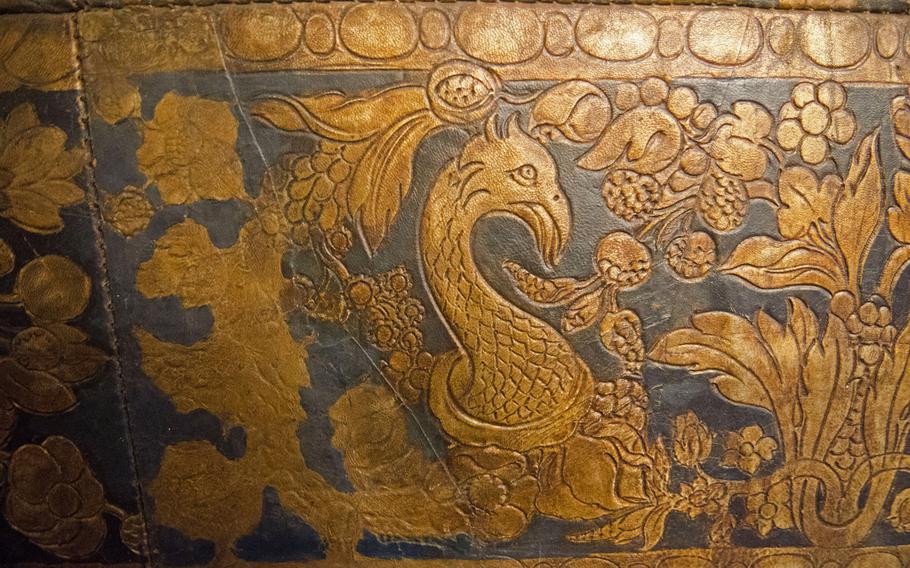 A detail showing a bird adorns historic leather wallpaper in the former residence of the von Greiffinclau family at Schloss Vollrads near Wiesbaden. (Dan Stoutamire/Stars and Stripes) 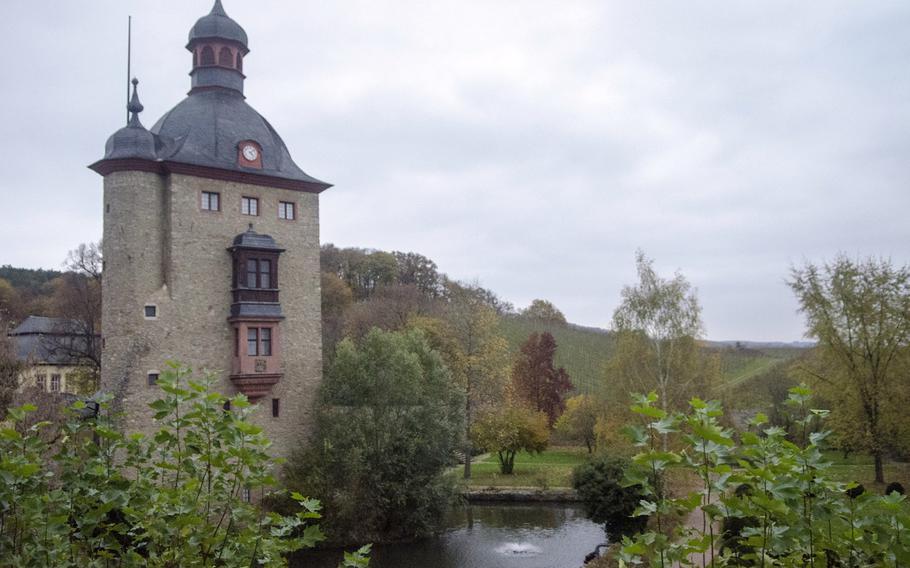 The tower — originally constructed in the 1330s — of Schloss Vollrads is surrounded by a natural moat and is now at the heart of the palace complex. The tower was live-in, meaning the von Greiffenclau noble family, who owned the palace, lived there until the construction of the nearby manor house in the 17th century. (Dan Stoutamire/Stars and Stripes)

Situated near the top of an impressive hill overlooking the small town of Oestrich-Winkel, Germany, and the Rhine River, Schloss Vollrads is a medieval and renaissance palace complex that is now gaining renown as a producer of good Riesling.

The complex is dominated by a massive residential and protective tower, built by the noble von Greiffenclau family in the early 14th century. Buoyed by the wealth the land provided in timber and wine, the family added a sizable manor house in the late 17th century.

Schloss Vollrads’ current incarnation is unmistakably modern. Besides making and selling wine, it is using the grand manor house as a restaurant and banquet hall for weddings and other major events.

The restaurant serves both high-end cuisine and traditional German comfort food, such as schnitzel and roasted potatoes. According to event manager Christian Cavallo, the comfort food is good hiking fare for the hundreds of visitors the palace greets every year due to its location along the Rheinstrecke hiking trail, which runs from Wiesbaden to Bonn.

After a meal or before, guests can walk along the old palace grounds and in the hereditary forest of the von Greiffenclau family, now a protected wilderness area. In the winter, the terrain is a little bare, but for most of the year it is lush, green and offers splendid views of the palace and the Rhine. For hundreds of years, the river has carried the palace’s wine to markets along its shores.

For all of its history and beauty, the main attraction at the palace has to be its wine. Like most vineyards of the Rheingau region, it specializes in Riesling, producing three major varieties — dry, semidry and sweet. Wine tastings are available year-round in English; a minimum of 12 people per group is recommended.

For Americans — and anyone who likes turkey — the palace has recently begun an annual prix fixe Thanksgiving menu (39 euros), with corn chowder, stuffed turkey, cranberry sauce and other traditional favorites. Reservations are required for this meal and for Christmas dinner (42 euros), served daily for two weeks before the holiday. Both meals are three courses.

Out of the way, but not too far off of the beaten path, Schloss Vollrads has something for every visitor: history, good food and excellent views.

Vollradser Allee, 65375 Oestrich-Winkel, Germany. From Wiesbaden, take the A66 toward Rudesheim. From there, get on the B42. In Oestrich-Winkel, take a right on Im Kreuzgarten, which becomes Engerweg. Turn left off Greiffenclau-strasse, then right on Obere Schwemmbach. Continue on Obere Schwemmbach, which becomes Vollradser Allee.