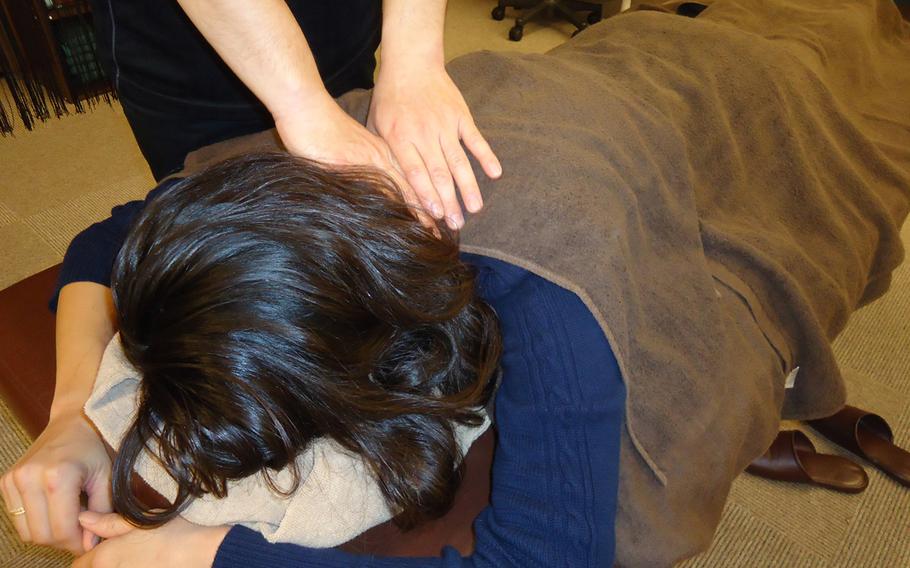 Buy Photo
A Japanese woman enjoys a full-body massage at Riraku, an affordable massage salon located near Sasebo Naval Base in southern Japan. Distinguished by its glowing yellow sign, Riraku is open late and offers massage packages starting at 900 yen (about $10) for 15 minutes. (Matthew M. Burke/Stars and Stripes)

Buy Photo
A Japanese woman enjoys a full-body massage at Riraku, an affordable massage salon located near Sasebo Naval Base in southern Japan. Distinguished by its glowing yellow sign, Riraku is open late and offers massage packages starting at 900 yen (about $10) for 15 minutes. (Matthew M. Burke/Stars and Stripes) 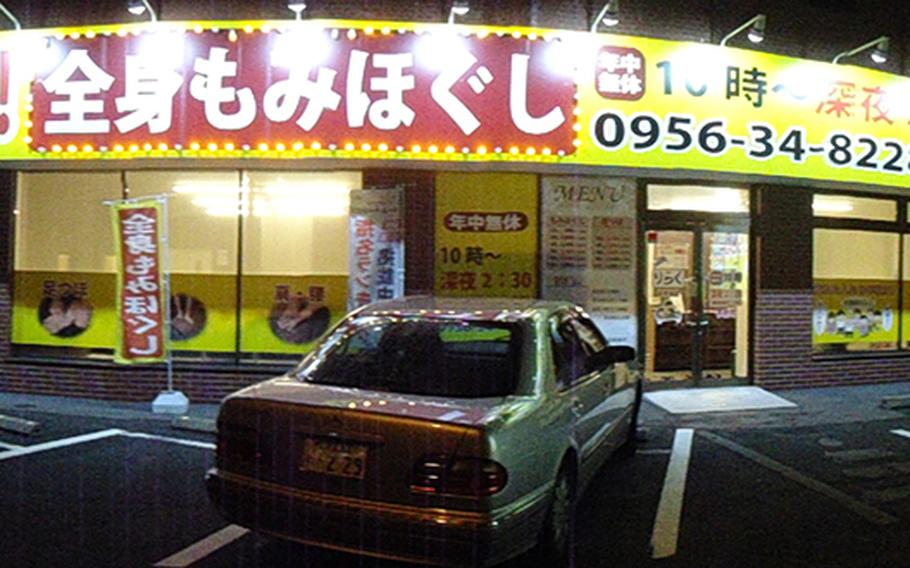 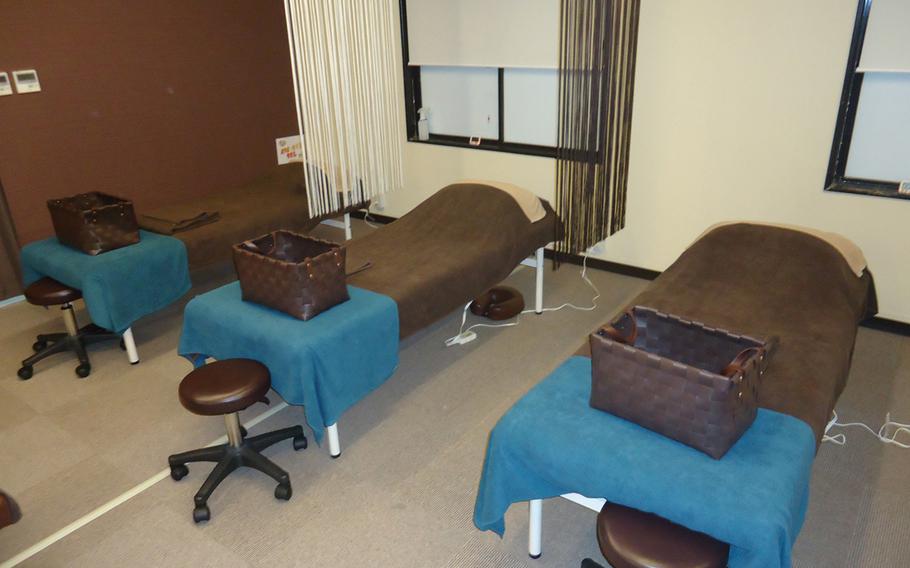 Buy Photo
When patrons lie down on one of the comfortable massage tables at Riraku, their stress just melts away. (Matthew M. Burke/Stars and Stripes) 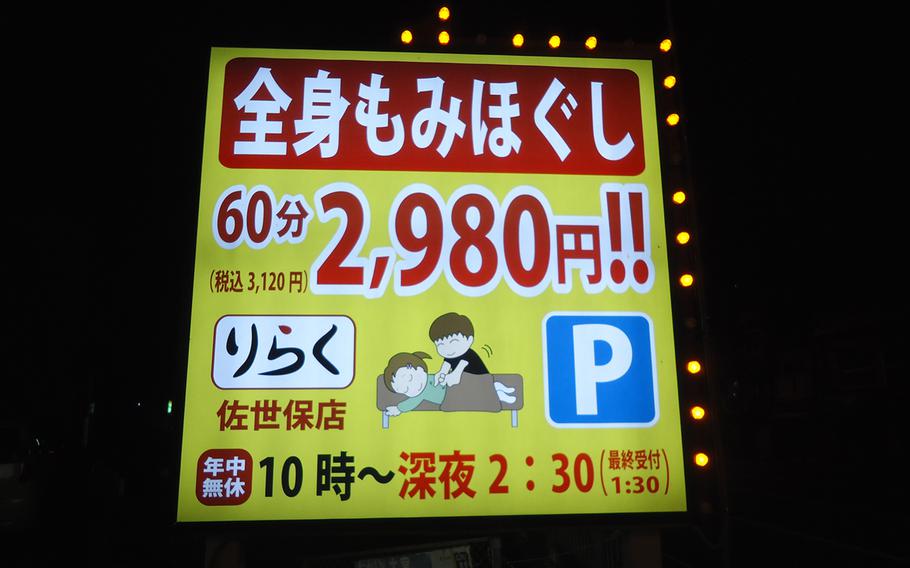 Buy Photo
You don't have to read Japanese to understand the treat that is in store at Riraku, near Sasebo. (Matthew M. Burke/Stars and Stripes) 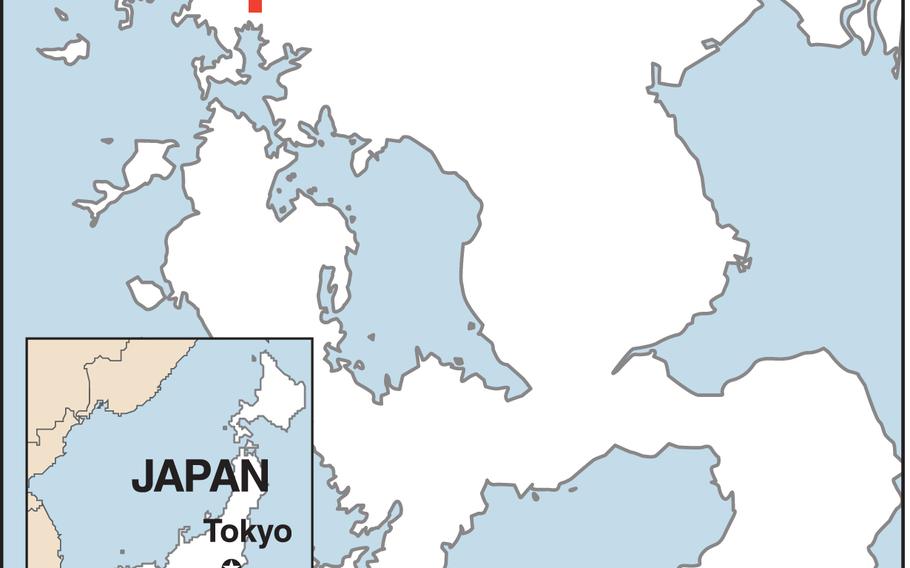 In recent weeks, ample weight has been piled on the shoulders of America’s military and government workers overseas in the form of sequestration layoffs, furloughs and the suspension of programs and benefits.

The stress has been palpable.

The solution? Get a massage.

Riraku salon is the little-known secret weapon of sailors and government employees in combating stress in Sasebo, Japan.

Located just down the street from Sasebo Naval Base on the southern Japanese island of Kyushu, the salon offers affordable massages that are sure to make you forget about even the worst of days. The massages are for relaxing and are not medical grade, so they are far more affordable than one might find elsewhere. However, their quality and effects cannot be diminished.

Riraku, derived from the word “relax,” barely closes and is open from 10 a.m. to 2:30 a.m. the following morning (last order is 1:30 a.m.), perfect after a rough day at the office or a strenuous workout. Call ahead and book a full body massage ranging from 15 minutes to two hours long, or a foot massage from 30 minutes to two hours.

Prices vary. A 15-minute body massage costs between 900 and 940 yen (about $10) but is limited in scope. The longer you go for, the more work is offered to knead and roll out those kinks and knots.

Some of the masseuses at Riraku speak English and can help with the menu. It is not unusual to see American sailors and government workers in there with a towel over their faces, snoring softly as their bodies get some tender loving care from the angelic hands of Riraku’s wonder-workers.

Riraku is a chain with 250 shops in Japan, according to literature passed out at the Sasebo shop, so servicemembers and civilian employees all over Japan have a sporting chance of finding one of their numerous locations, which are listed on their website.

Riraku is so good, it will leave you saying, “Sequestration who?”

Riraku Directions Riraku salon is located on the left hand side of Route 35 when heading away from Sasebo Naval Base and the shopping arcade, past the Heiansha funeral home. You can’t miss their large, glowing yellow sign.