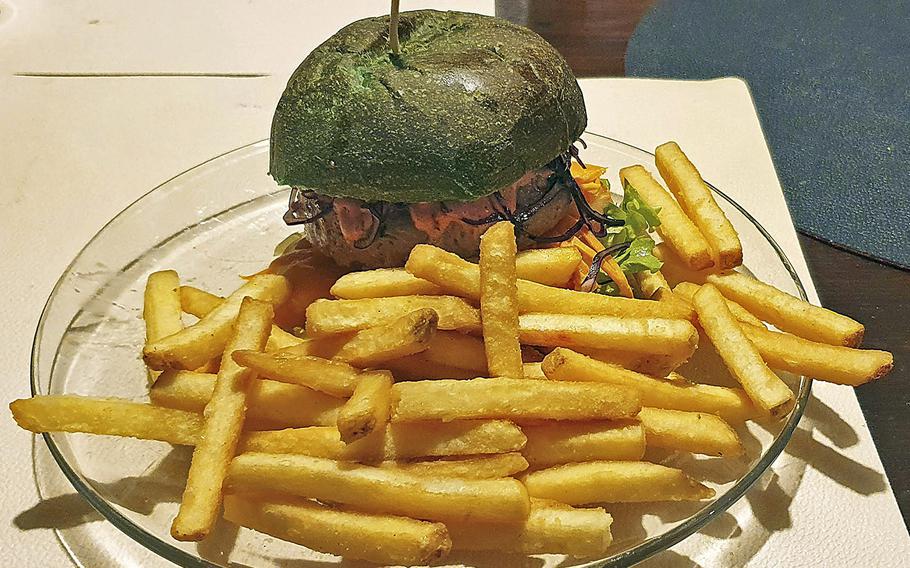 Buy Photo
The ''Hulk'' burger from Sacellum-Cucineria Urbana in Sacile, Italy.The green bun is made with chlorophyll and the 7-ounce patty is stuffed with cheddar cheese. (Norman Llamas/Stars and Stripes)

Buy Photo
The ''Hulk'' burger from Sacellum-Cucineria Urbana in Sacile, Italy.The green bun is made with chlorophyll and the 7-ounce patty is stuffed with cheddar cheese. (Norman Llamas/Stars and Stripes) Buy Photo
A rack of barbecue pork ribs and a side of fries from Sacellum-Cucineria Urbana in Sacile, Italy. (Norman Llamas/Stars and Stripes) 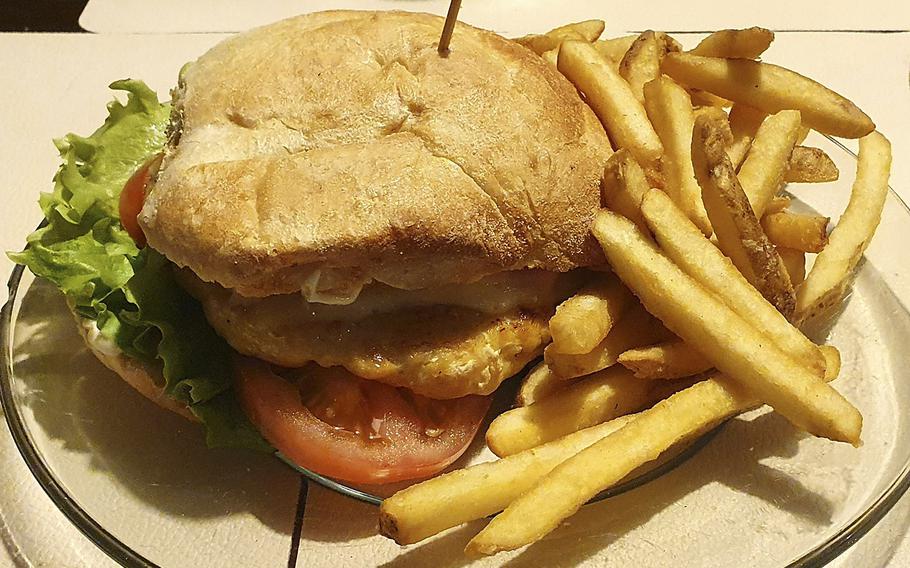 Buy Photo
A chicken sandwich from Sacellum-Cucineria Urbana in Sacile, Italy. The flavors resemble those you would get from a similar restaurant in the United States. (Norman Llamas/Stars and Stripes) 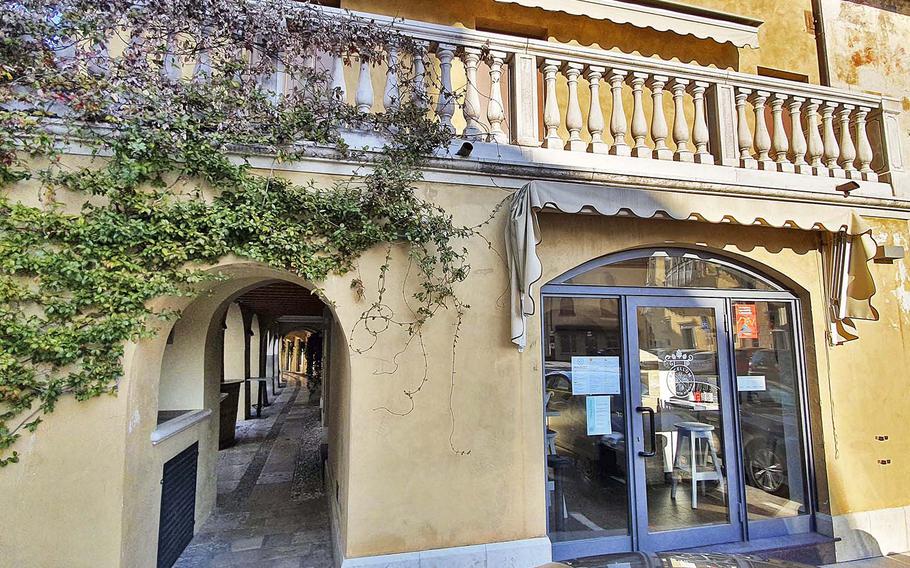 Buy Photo
Sacellum-Cucineria Urbana in Sacile, Italy, which is located about nine miles southwest of Aviano Air Base. The restaurant's menu includes burgers, ribs and other standards familiar to Americans. (Norman Llamas/Stars and Stripes)

Getting a really good burger, a delicious rack of barbecue ribs or a great club sandwich isn’t too challenging in the U.S., but it can be for service members in Italy.

That was true even before the pandemic and the shutdown of many restaurants, particularly in Italy’s northeast.

But for those who are lucky enough to live in or near Sacile, not far from Aviano Air Base, you’re in luck. The town has a few restaurants that offer great American-style food and delivery service. One such place is Sacellum - Cucineria Urbana, located on the outskirts of the main town plaza.

Sacellum is spacious and worth a visit for a night out when life returns to normal. There are two floors with tables arranged in ways that allow diners to enjoy their privacy or have a view of the restaurant’s surroundings, such as the church of Saint Nicolo Bishop. Outdoor dining is also available.

The restaurant’s owners describe it as a pub, restaurant and ciccheteria. “We’re a big family that’s always ready to expand,” owner Roberto Carazza says on his restaurant's Facebook page.

A ciccheteria is similar to a Spanish tapas bar that serves small-plate appetizers. Venetians call these plates cicchetti, which is derived from the Latin term ciccus, meaning little, or nothing. But don’t let that scare you off; the selection is large and inviting.

They include crostini, which are open-faced sandwiches; polpette, or fried meatballs; triangular tramezzini sandwiches; and panini on crusty bread. They may also include pickled, baked or stuffed appetizers.

What my wife and I really like are the huge burgers and the barbecue pork ribs. We’ve ordered delivery a few times and found the food was fresh, delicious and plentiful.

This time we ordered one of the most unique burgers we’ve ever seen. The “Hulk” burger comes on a bun dyed green with chlorophyll. The seven-ounce beef patty is stuffed with cheddar cheese, and topped with a beet mayonnaise, julienne carrots in a mustard dressing, purple cabbage, lettuce and Roma tomatoes. It comes with a side of fries.

The Hulk burger had an interesting flavor, maybe due to the chlorophyll, but I didn’t particularly care for it. I’ll go for something a little more standard next time. My wife enjoyed it though, and it is striking to look at.

The ribs cooked at low temperatures are the closest thing to America you’ll find on a menu here. They’re so flavorful and plentiful. I would recommend them to everyone.

We also ordered a savory chicken sandwich, jalapeno poppers that were slightly spicy and a couple of craft beers. Sacellum has an extensive number of beer and wine options, local, regional and imported.

With more than half the country being in lockdown again, I’d recommend Sacellum as a well-deserved break from cooking your own food. There is plenty of great Italian food around Sacile, but it’s also nice to get something that connects the local cuisine with something more familiar.

Hours: Due to the pandemic, open only for delivery through the Foodracers app from Thursday to Sunday, 6 p.m. to 9:30 p.m.

Menu: In Italian but the Foodracers app translates it to English.