Saarbruecken: Exhibit is a study in photorealist's technique 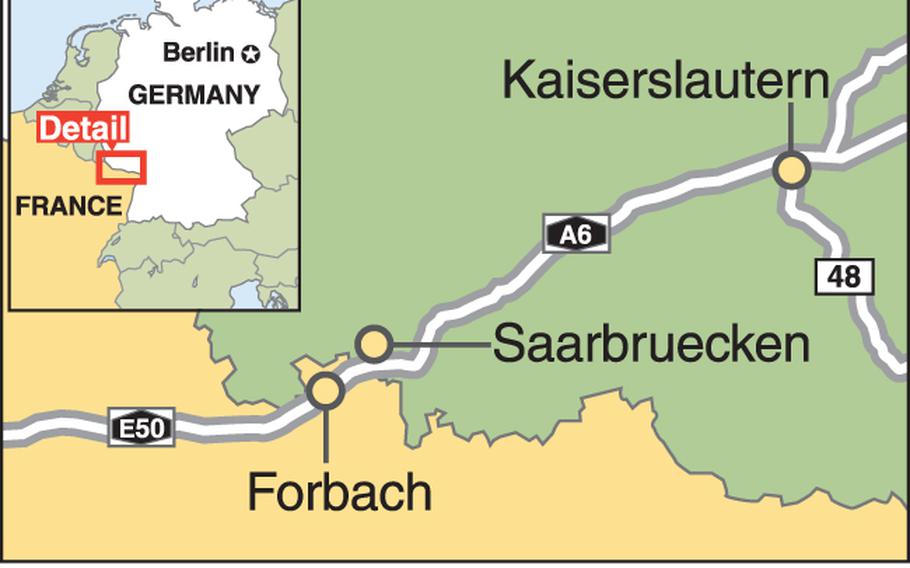 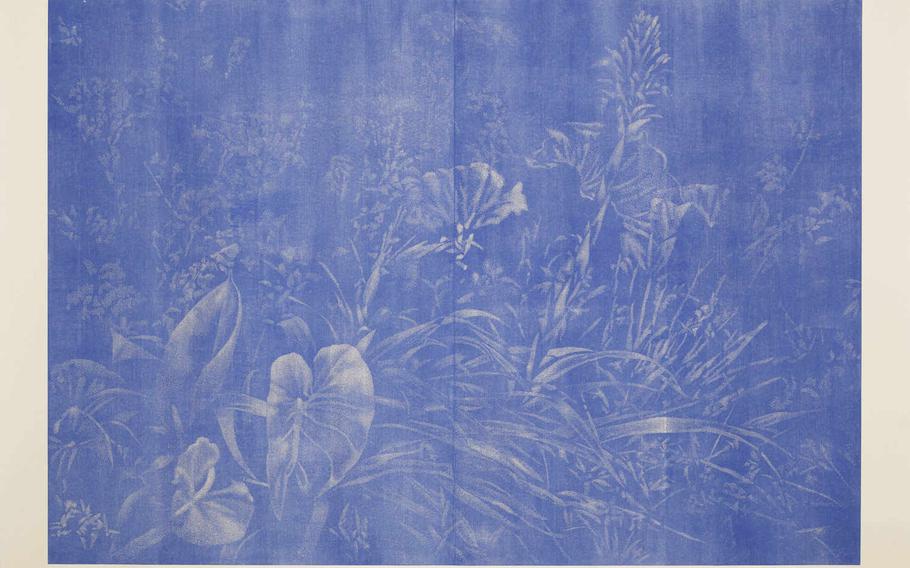 "Bromelia" is one of several massive woodcuts by Franz Gertsch on display at Saarlandmuseum's Modern Galerie through Feb. 14, 2016. A photorealistic effect is achieved by cutting thousands of tiny dots into the wood. (Dominique Uldry/Franz Gertsch 2015 collection of the artist) 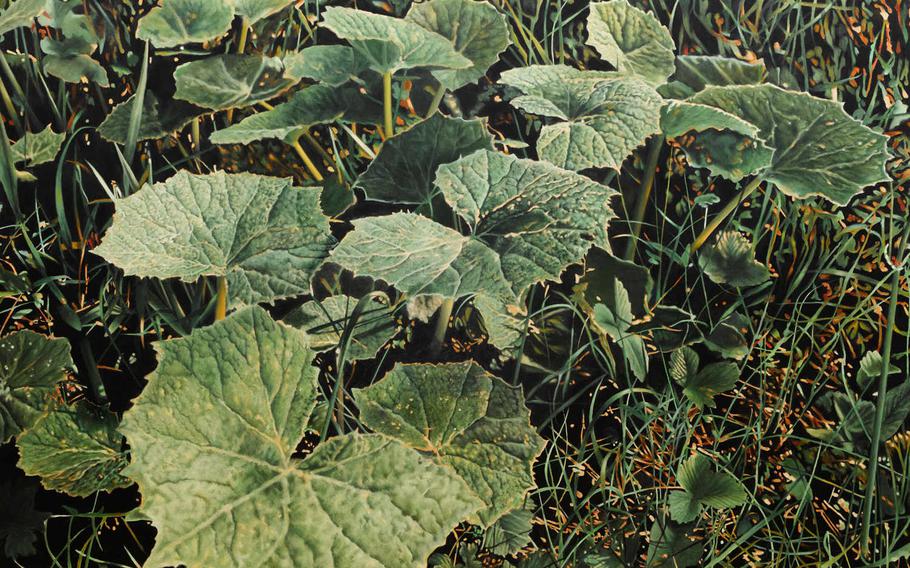 Franz Gertsch's "Pestwurz" (Butterbur) achieves a photographic effect by depicting the leaf in the foreground out of focus. A selection of Gertsch's paintings is on display at the Saarlandmuseum's Moderne Galerie through Feb. 4, 2016. ( Dominique Uldry/Franz Gertsch 2014/2015 collection of Willy Michel) 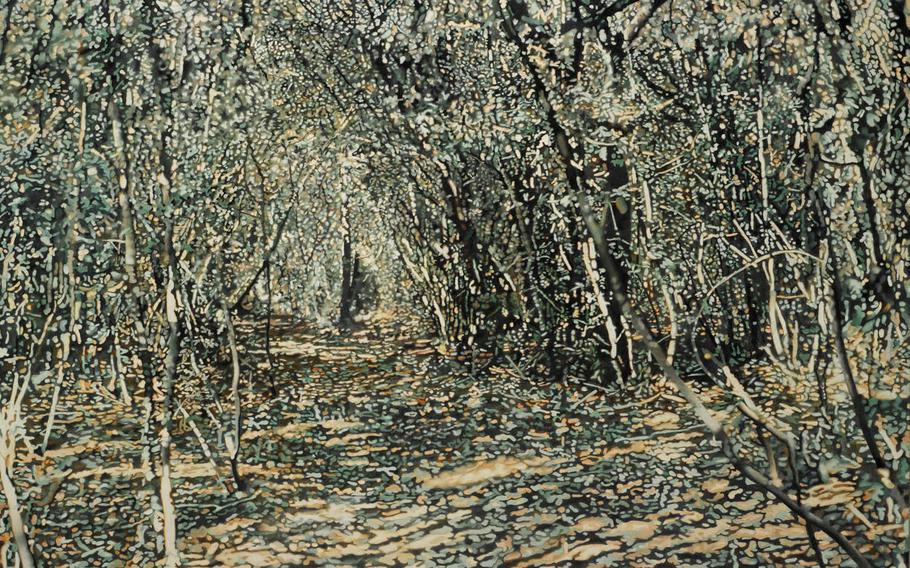 "Waldweg" (Forest Walk) is among the paintings on display at an exhibit of works by Franz Gertsch at Saarlandmuseum?s Moderne Galerie in Saarbruecken, Germany. A short documentary showing Gertsch at work on the painting deepens the viewer's appreciation of the Swiss photorealist's technique. (Dominique Uldry/Franz Gertsch 2015 collection of the artist)

The exhibit hall in Saarbruecken, Germany, where the work of Swiss artist Franz Gertsch is now on display, gives the impression of a field or a quiet wood. Massive paintings and prints, mainly of outdoor scenes, hang from the walls of a spacious, dimly lit room. Their size and subtlety encourage the viewer to consider them with the contemplative eye of a hiker taking in a landscape after a long trek.

And there is much to contemplate here — not just beautiful scenes from nature but also the technique Gertsch employed to create them.

I didn’t know before my visit to Saarlandmuseum’s Moderne Galerie that Gertsch, one of Switzerland’s foremost painters, is regarded as an important exponent of photorealism. So I spent much of my time trying to identify the genre to which his art belongs.

“Bromelia,” a picture of plants bearing the same name, was one of the first items to catch my eye. From a distance, it resembled a blueprint; as I drew closer, I could make out tiny white dots that together created the illusion of shade and contour. I wondered how Gertsch had made this picture. Was it a screen print, produced directly from a photograph, like Andy Warhol’s celebrity portraits? Could it be a painting, the dots formed by speckles of white pigment?

When I discovered it was woodcut, I was intrigued. How could an artist possibly create such a print on this scale (9 feet by 12 feet)? And how was he able to determine the proper size and placement of thousands of pinpoints?

I looked at the rest of Gertsch’s works in a similar fashion — from afar, close up and then again from a distance. Without knowing his biography, I could tell that some of these pictures — such as “Maria,” a woodcut of a reclining nude, and “Pestwurz,” a painting of butterbur plants — were examples of photorealism. And maybe for that reason, they didn’t much impress me.

“Maria” resembled those dot-matrix snapshots once sold in U.S. shopping malls. “Pestwurz,” which shows a group of green plants on a bed of grass, struck me as little more than a pretty technical exercise, its photographic origin betrayed by a slightly out-of-focus leaf.

But “Bromelia” and another print, “Schwarzwasser Tryptychon” (Black Water Tryptych), were different. Their appeal was that they could have been drawn from life. Somehow they transcended the trickery I associate with photorealism, exhibiting an emotional quality I couldn’t put my finger on.

It was the same with “Waldweg” (Forest Walk), a painting whose name describes what it depicts: a path surrounded by bushes and trees. From above and the side, light pours into the wood, creating shimmering circular patterns on the ground and branches. The picture is so vivid the viewer can almost hear leaves rustling. Its surface is equally fascinating. Though Gertsch used egg tempera, the highlights are soft, almost bubbly, like those of a watercolor. At the same time, with its simplified palette of green and orange, it could be a print or a tapestry.

Producing prints and paintings on this size is an undertaking that requires a great deal of planning and patience, as the visitor discovers from a short documentary that plays in a corner of the exhibit hall. The video, which no viewer should miss, not only shows how Gertsch creates his art; it suggests how we should look at it.

We see Gertsch at work on “Waldweg.” This picture and others are drawn from slides. As he paints, Gertsch constantly refers to the photographic original, turning a projector on and off with a remote switch by his side.

Rather than blocking out the entire picture with chalk before taking up his brush, he sketches a little bit at time — meticulously filling in the outlines with paint — before moving on to another section. The overall shape emerges only as the paint is filled in, spreading, like a blot of ink, from the center to the edges. Perhaps this technique allows him to improvise or adjust the proportions as he goes along.

There seems to be no improvisation, however, when it comes to the colors. Gertsch establishes a palette — lighter and darker values of a small range of colors — and fits them in, like tiles in a mosaic.

I found the making of the woodcuts even more of a revelation. Before I saw the video, I couldn’t imagine how Gertsch had managed to achieve a photographic effect with a woodcut — at least not on such a huge scale. I suspected, before seeing the video, that he might have used a photomechanical process, perhaps employing a halftone screen to determine the size and placement of the carved dots. In fact, he cuts the wood by hand with a gouge, using a projected image as his only guide. Just creating the wooden plants from which the prints are made is quite an endeavor, requiring the gluing together of scores of wooden strips.

My obsession with Gertsch’s technique was partly due to my own artistic biases. Like many, I have a hard time separating my appreciation of an artwork from my perception of the skill and intelligence required to produce it. And photorealism, though I enjoy it, has ranked pretty low on my scale — a notch above conceptual art and a notch below photography, from which it’s derived.

But Gertsch changed that, and the video was key. When you watch him at work, you realize that what he does involves much more than mere tracing or coloring by number. The photographs on which his pictures are based seem to be like scripts or scores that he interprets. And this show at Moderne Galerie, which runs through Feb. 14, is one great performance.

Bring your kids along — the video is sure to be a hit with them.

DIRECTIONS Saarlandmuseum, Moderne Galerie, Bismarckstrasse 11-15, Saarbruecken, Germany. Via the A620, take the Wilhelm-Heinrich-Bruecke exit and follow the signs to the Saarlandmuseum. Parking is available in the theater garage, Schillerplatz and the garage on Talstrasse.