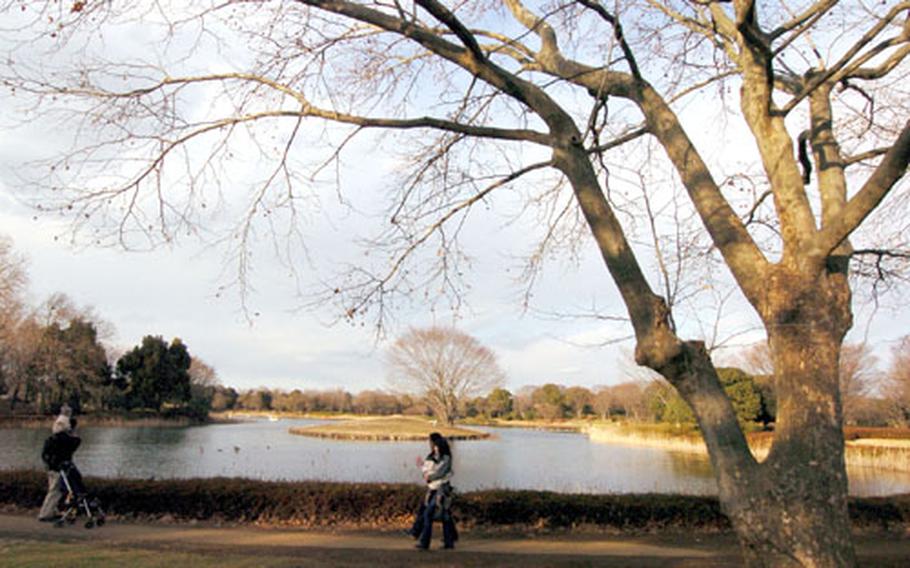 Japanese patrons can exercise and play in the open fields at Showa Park. A former military base, the park was establishing to commemorate the 50th anniversary of emperor Showa’s reign. The park opened in 1983 and has attracted many visitors since. (Christopher B. Stoltz / S&S)

Japanese patrons can exercise and play in the open fields at Showa Park. A former military base, the park was establishing to commemorate the 50th anniversary of emperor Showa’s reign. The park opened in 1983 and has attracted many visitors since. (Christopher B. Stoltz / S&S) 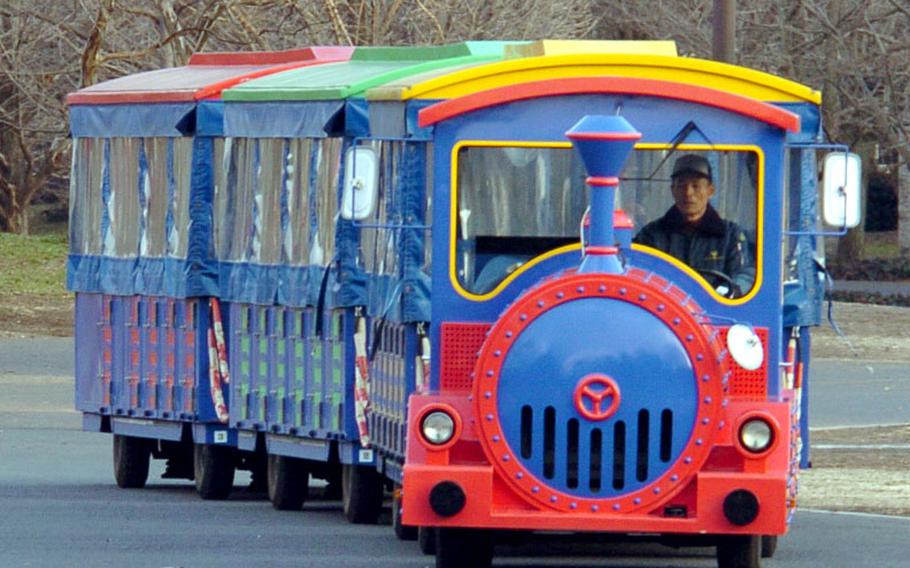 Japanese patrons ride in a trolley that tours around the park during a chilly winter evening. (Christopher B. Stoltz / S&S) 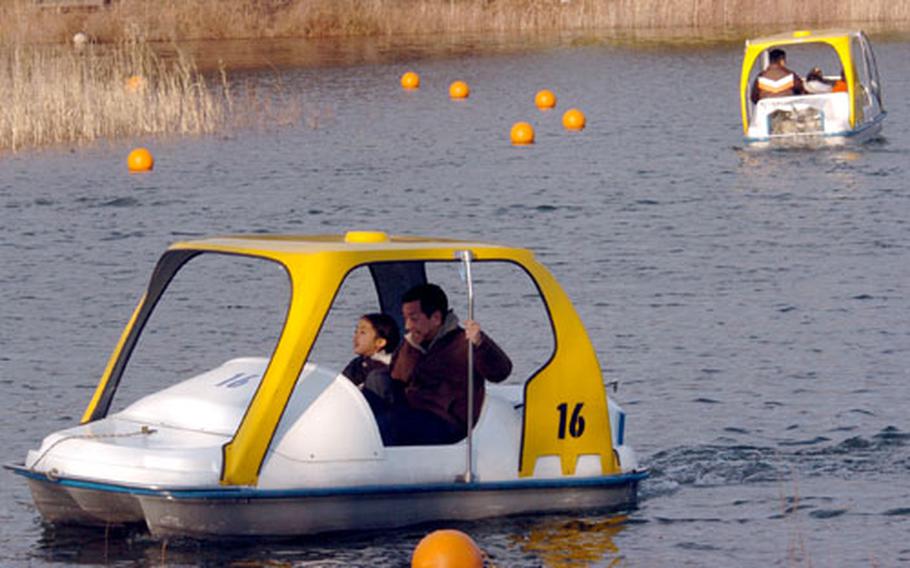 Japanese patrons at the park ride in paddle boats. (Christopher B. Stoltz / S&S) 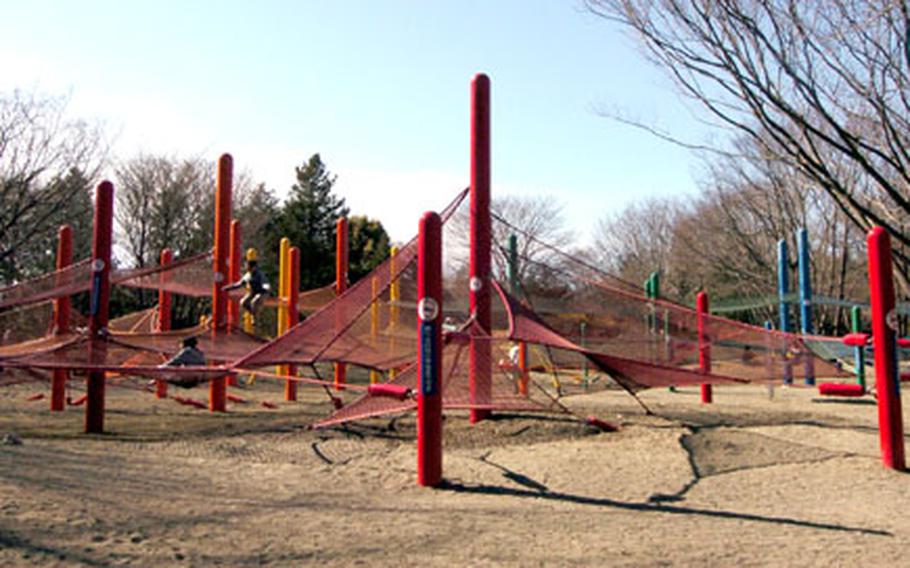 Japanese kids play on suspended nets during a chilly winter evening at the park. (Christopher B. Stoltz / S&S) 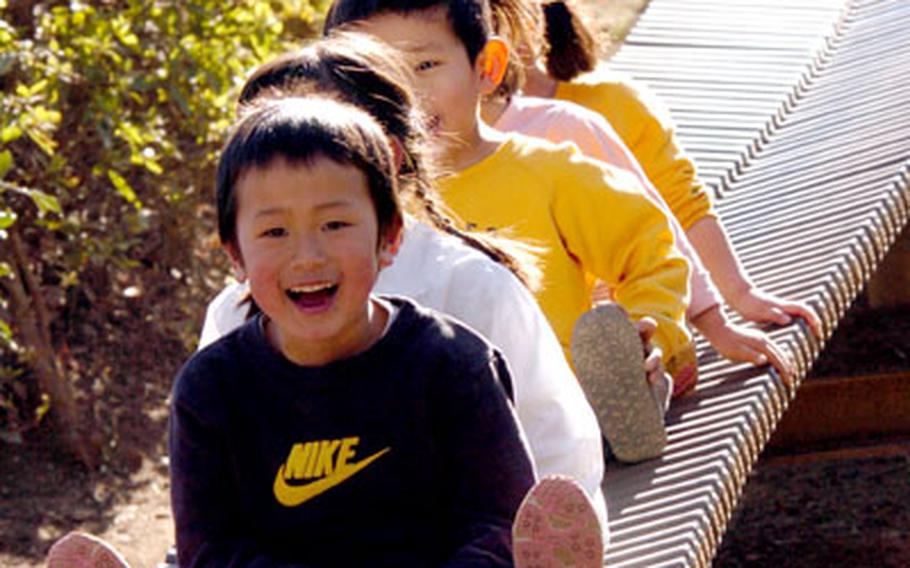 Whether you&#8217;re married with kids or single and living in the barracks, there&#8217;s one thing anyone living in a country where open space is not commonplace could use: a little elbow room.

And if that elbow room can be found in a giant park where open fields seem to fade into the distance, gardens of vast colors are sprinkled about and a playground is so vast that they&#8217;ll surely tire out, then Showa Kinen Park is the place for you.

A former military base about 3 miles from Yokota Air Base, the park opened in 1983 to commemorate the 50th anniversary of emperor Showa&#8217;s reign.

With enough land that it&#8217;s hard to walk it in a day, you can lose yourself for many hours. If you want to have a romantic picnic, rent bicycles, fly a kite or play ball with some friends, there&#8217;s plenty of space for all.

And if you&#8217;re a kid, trampoline domes and huge nets in the shape of spider webs will have you running toward them. There are also massive dragons built out of stone and slides made out of rollers.

If you don&#8217;t want to bring a picnic, there are several eating venues for your picking inside the park.

One piece of advice for those heading to the park for the first time: pick up a map at one of the gates and agree on a meeting time and place if your group splits up. Otherwise, you may have to send out a search party.

&#8226; There are many barbecue areas throughout the park.

&#8226; In the New Sports Area in the park, play putt-putt golf, disk golf, tennis, croquet, or lawn bowling. And there is boating. There may be a fee for some activities. There are 40 locations where plants are labeled and numbered for your studying or pleasure.

&#8226; There are large playgrounds for kids to use with everything from slides to bouncing platforms. If you have kids, enter the north gate, which is closest to the kids&#8217; area.

How to get there: You can take the Ome line to the Nishi-Tachikawa exit. Or a quick 10-15 walk from Tachikawa.