Rock Bar Yeah serves simple, tasty burgers and fries that will fill you up without breaking your wallet. The bar also offers pizzas and snacks like nachos and edamame. (Tyler Hlavac/Stars and Stripes)

Rock Bar Yeah serves simple, tasty burgers and fries that will fill you up without breaking your wallet. The bar also offers pizzas and snacks like nachos and edamame. (Tyler Hlavac/Stars and Stripes) 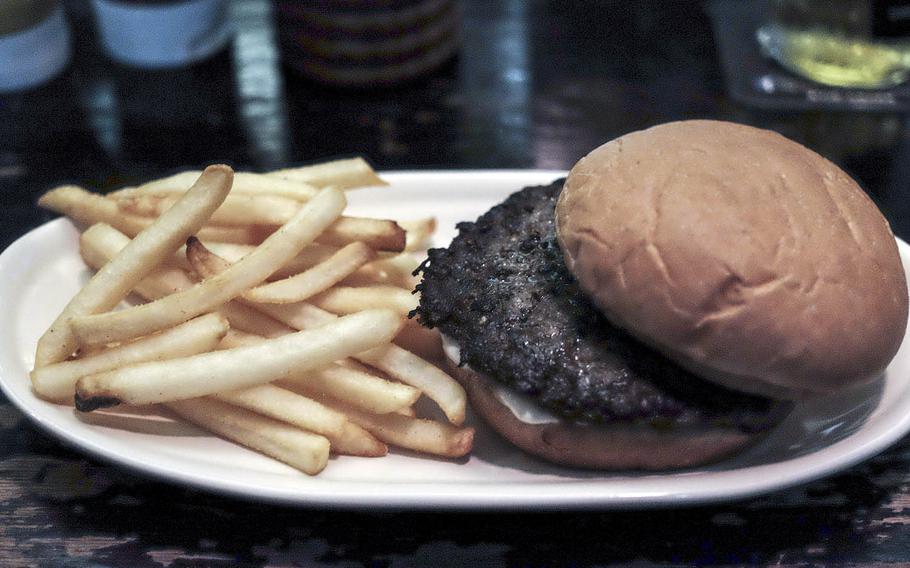 Rock Bar Yeah in Yokosuka, Japan, boasts an atmosphere similar to that of many dive bars found back in the states. (Tyler Hlavac/Stars and Stripes)

Rock Bar Yeah is the focal point for Yokosuka’s rock ’n’ roll community and offers escape from the hip-hop and electronic dance music blasted at most off-base clubs.

The bar, which actually has an expletive in its name between “Bar and “Yeah,” livens up a mostly deserted basement mall under the Central Hotel by pumping out a steady stream of rock music from loudspeakers and hosting live performances.

It has all the trappings of an American dive bar, including cheap drinks, burgers and pizza that contrast with the relatively ritzy food served at many of Yokosuka’s other burger joints.

Its Japanese and American Navy customers prefer the hard-hitting sounds of 1980s and ’90s thrash and metal bands like Megadeth or Rammstein. But in quiet moments you might hear bluesy songs by Jimi Hendrix or the Rolling Stones.

The staff will let you pick some songs but also reserves the right to veto your music selections.

Rock Bar Yeah has a decent sound system with audio quality superior to other music venues in the area. If you get sick of listening to music, head over to one of the tables in the back where you can play board games like Connect Four while you drink.

Navy command ball caps — some from ships that completed their tours at Yokosuka Naval Base more than 10 years ago — line a wall at the 20-year-old bar.

Rock Bar Yeah hosts plenty of live events. On Sundays, when the bar is closed, you can sometimes walk by and hear bands practicing.

Rock Bar Yeah Location: 2-8 Wakamatsu-cho, Yokosuka 238-0007. In the basement of the Yokosuka Central Hotel, a few blocks away from Yokosuka-chuo Station.