Rock-am-Ring a wild show, onstage and off 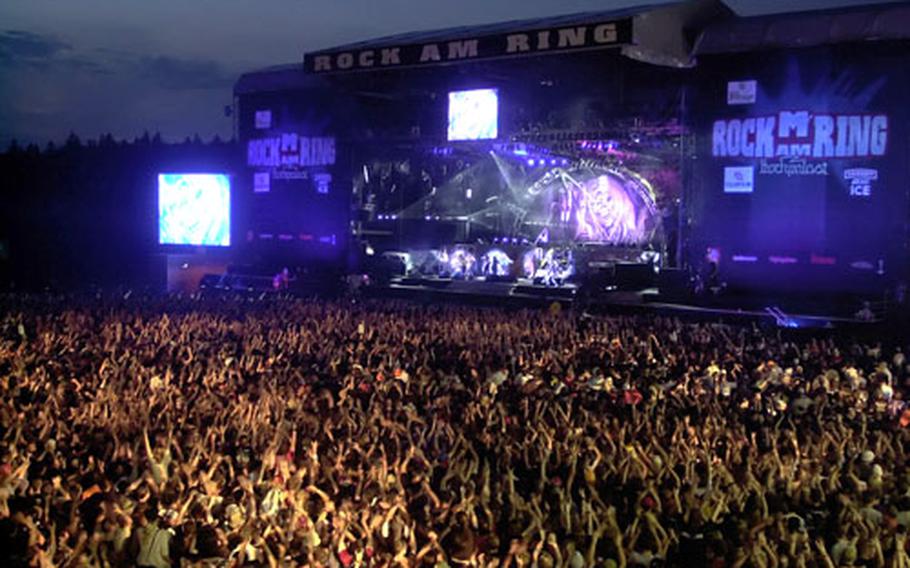 From early afternoon until late in the evening, you can catch more than 100 bands at Germany’s annual Rock-am-Ring festival. (Raymond T. Conway / S&S)

From early afternoon until late in the evening, you can catch more than 100 bands at Germany’s annual Rock-am-Ring festival. (Raymond T. Conway / S&S) 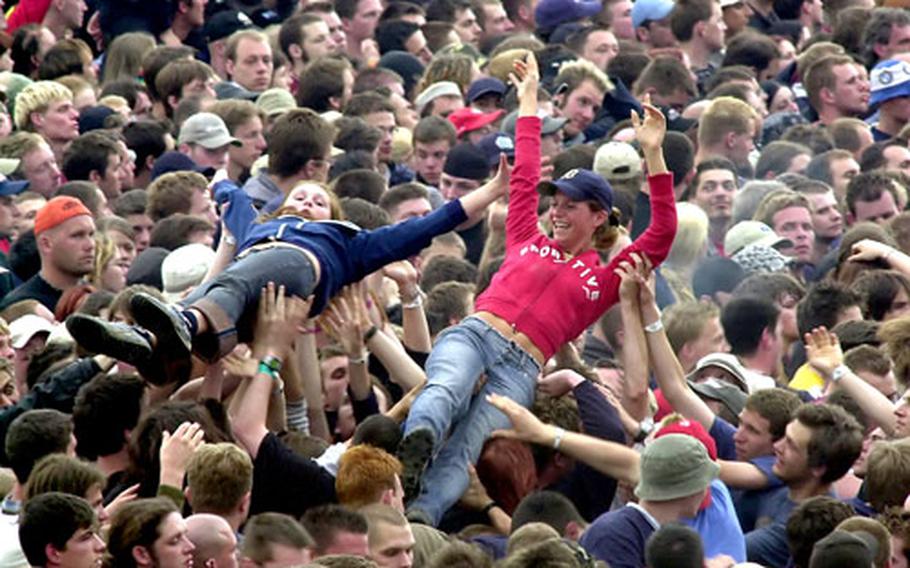 Music festival fans packed in like sardines sometimes find that surfing the crowd provides a much easier route to the food booths, bathrooms, etc. Getting back to your original spot is a completely different story. (Raymond T. Conway / S&S) Two campers come prepared for three days of music and merrymaking. The most die-hard fans camp in “Ground Zero,” just outside the festival grounds. (Courtesy of Rock-am-Ring) Fans, wearing the wristbands that serve as tickets to the three-day Rock-am-Ring fest, are packed in around the three stages. (Courtesy of Rock-am-Ring) 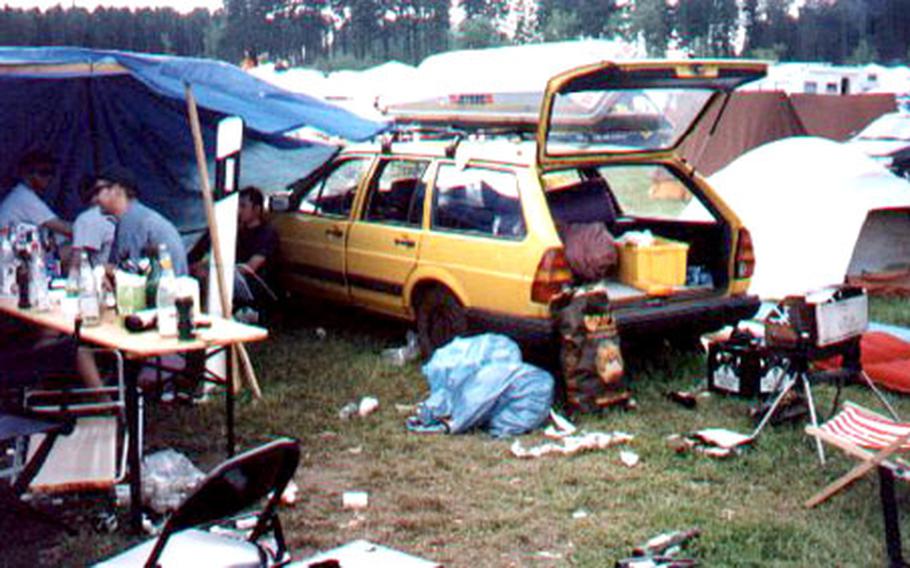 Just about anything goes for food and shelter during the three-day Rock-am-Ring festival, which this year was held June 3-5. (Courtesy of Rock-am-Ring)

After attending another Rock-am-Ring, Germany&#8217;s annual three-day, three-stage music festival, I offer the following: The music is the reason for the event, but it&#8217;s only half the experience, if that.

The part not to be missed is the three-ring circus put on by the festival goers. Meeting other fans, sharing their passion for music and just having fun are some of the biggest reasons folks keep returning to this event, which marked its 20th anniversary with another big weekend earlier this month.

Simply put, the entertainment is on both sides of the stage.

This summer, more than 150,000 fans attended the show at the Nurb&#252;rgring racetrack in the Eifel region and its sister event, Rock-im-Park, held the same dates in N&#252;rnberg, Germany.

The festival format separated the bands into three venues: the Main Stage, which had the biggest names such as Green Day, R.E.M., Marilyn Manson, Maroon 5, Iron Maiden, Billy Idol and Velvet Revolver; the &#8220;Alternastage,&#8221; which showcased alternative acts such as The Prodigy, The Chemical Brothers, Papa Roach, Apocalyptica, Slipknot, The Hives and Garbage; and the &#8220;Talent Forum,&#8221; which highlighted up-and-coming bands, including In Flames, Soulwax, The Ga-Ga&#8217;s, My Chemical Romance, Bullet for My Valentine and The International Noise Conspiracy.

Fans from across Europe and beyond converged upon the festival scene well before the weekend arrived. To people like Chuck Ahlborn, an American who works for the Defense Information Systems Agency in Stuttgart, &#8220;Being there for the atmosphere is half the experience. The bands are a bonus.&#8221;

Chuck and a bunch of German and American friends make the annual trek to Rock-am-Ring and split their time between camping, partying and going to the concerts. With help from John Taves, another American who helps set up the annual excursion, they provided non-stop food and drink and a covered area for the crew of friends who attended the event.

Tanja Granatiero and her fianc&#233; Pat, a German/American couple, also drove up from Stuttgart for the show.

&#8220;Rock-am-Ring is just like a fest, when the Germans really let their hair down and have a good time,&#8221; said Pat, who works for the Net Defense computer security team at DISA-Europe.

While there is a &#8220;private&#8221; campground with facilities within a kilometer or two of the festival grounds, and &#8220;tent cities&#8221; that spring up on the fields around them, many people opt to camp out in an area commonly known as &#8220;Ground Zero.&#8221; This is the name given to the free parking/camping area outside the festival grounds where there are no fees, no facilities and no rules.

This is the area of choice for the hard partiers, people who are on a tight budget and people who you suspect have always wanted to live in a post-apocalyptic world. These are the most die-hard fans, literally giving it all up to be in the area closest to the stadium for quick access and front-row spots for the shows. Scores of beer bottles, assorted trash and other unidentified objects litter Ground Zero.

Chad Carter, another American at the fest, had lots of tales of the Ground Zero people, especially when they were looking for basics such as firewood and food.

&#8220;One time we saw these two guys in a car driving through Ground Zero and all of a sudden the driver grabbed the parking brake and sent the car skidding sideways. His buddy in the front seat jumped out of the car and ran over to a stick in the road, a prospective piece of firewood, and held it over his head like the sword Excalibur,&#8221; Chad laughed.

Walking through camping areas is both interesting and entertaining. Festival goers show a great deal of creativity and humor when it comes to shoring up their campsites. A few of the things found this year were inflatable swimming pools, furniture including couches, love seats, recliners, wooden tables and chairs (some of them hoisted on top of vans for a better view by the users), homemade tennis courts, small informal restaurants, discos and Karaoke bars. There were posters and banners everywhere touting products ranging from beer to vacation resorts, national flags hung from trees and tents, beer-can art in the shapes of famous objects such as the Berlin Wall and the Sphinx, and toilet-paper-adorned trees and bushes as far as the eye could see.

All the camping areas have something in common: You don&#8217;t have to wander more than 100 feet to find a stereo blasting away. There&#8217;s quite a soundscape to be heard, everything from ABBA to Pantera to Frank Sinatra. The stereos play all day and night, and most seem to be cranked to the highest volume.

Wandering around the packed festival grounds (or &#8220;The Ring,&#8221; as it is called by the regulars) is like imitating cattle moving in a large herd. It won&#8217;t take long to learn the technique, because you don&#8217;t have a choice. The festival area is set up into the three stage areas, and it takes quite a bit of time to make it from one to another.

Because of this, you have to plan early to switch stages to ensure you can make it there in time. Maneuvering through the thick crowds is tough; during the headline acts, such as Green Day and Marilyn Manson, it bordered on the impossible.

Festival souvenirs did a hot business, with at least 80 percent of the festival-goers purchasing a T-shirt or some other item to commemorate the experience. Prices were not cheap (the average shirt was 25-30 euros), but it could have been worse, as recently some concert shirts elsewhere have sold for as much as 40-50 euros.

But who can put a price on a great memory? Anything for a keepsake of the fun times, the music and the experience that is Rock-am-Ring.

Patrick Tolbert is a civilian contractor and freelance writer living in Stuttgart, Germany.