Robert Gutierrez ‘RPG landed about 5½ feet from us’ 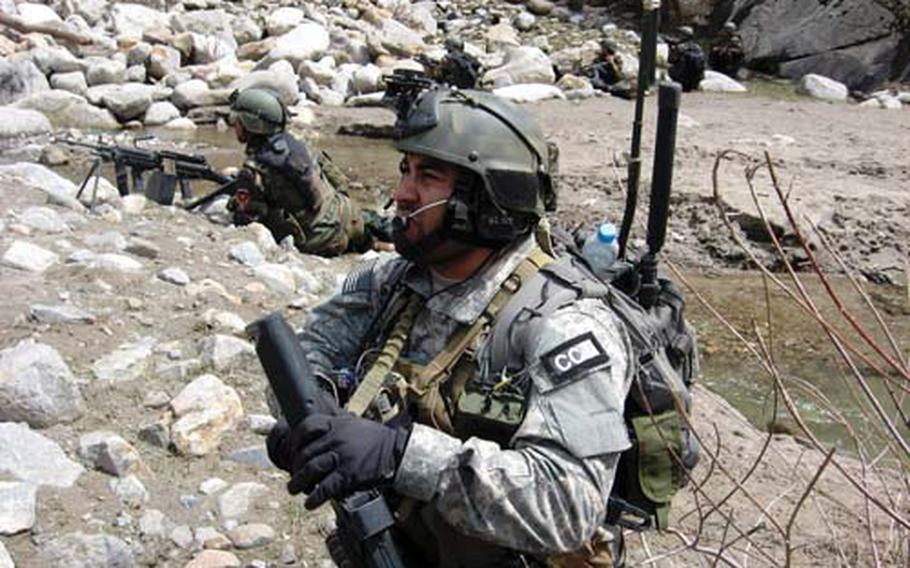 Staff Sgt. Robert Gutierrez Jr. keeps an eye out for insurgents on patrol in Afghanistan. ()

It was late in the evening of Jan. 24, 2008, when Air Force Staff Sgt. Robert Gutierrez Jr. and a Special Forces team set out on their mission.

At the time, Gutierrez was with 352nd Special Operations Group out of RAF Mildenhall, England, attached to Army Special Forces Operational Detachment-Alpha 3312 as a joint terminal attack controller.

The Special Forces team and about 15 Afghan troops headed to Gowardesh in eastern Afghanistan in search of a high value target.

On the way, they had to blow up two big boulders blocking a road.

"Once we did that, they knew we were coming," Gutierrez said.

After battling back an ambush in the early morning hours of Jan. 25, the U.S. and Afghan troops left their vehicles and walked across a damaged bridge in Gowardesh.

Soon afterward, the Afghan troops came across the insurgents.

"The whole eastern side of the mountain and the southern portion opened up on us," he said.

The enemy was only 30 feet away.

The team leader was hit where the shoulder and neck meet, incapacitating him.

Another Special Forces soldier, Staff Sgt. Robert J. Miller, was hit in the aorta and fell.

Gutierrez and another Special Forces soldier ran to Miller, shooting at seven or eight insurgents.

They worked to stop Miller&#8217;s bleeding, but Miller died within a minute.

Gutierrez and the soldier were out in the open as they tried to move Miller&#8217;s body.

"Every time we moved, the insurgents knew where we were at, so they would start shooting at us more," he said.

Gutierrez was able to reach two A-10s and call in a strafing run even though the aircraft would have to shoot dangerously close to their position.

The A-10s made 10 or 12 strafing runs using their 30 mm cannons as the insurgents tried to overwhelm the Special Forces team.

During the firefight, the Special Forces soldier with Gutierrez was hit twice in the chest plate but escaped injury.

They were able to drag Miller&#8217;s body about 50 feet, but daylight was approaching and they were still in the open.

Gutierrez was able to reach the rest of the Special Forces team and learned they had found cover.

"Myself and the Army ODA [Special Forces] sergeant that was with me, we decided Robbie Miller&#8217;s body is here, we can see him, if we don&#8217;t get behind some cover, daylight is going to break and we&#8217;re going to get killed," Gutierrez said.

The two decided to temporarily leave Miller&#8217;s body and ran to a terrace about 25 feet away.

From there, Gutierrez directed F-16s to drop 500-pound bombs on enemy positions about 80 yards away. Once the bombs hit, the two ran to the rest of the Special Forces team.

Gutierrez then had aircraft strafe and destroy two homes from which the team was taking fire, allowing for five wounded troops to be evacuated.

At the same time, they fired at the insurgents to keep them away from Miller&#8217;s body.

Eventually, a quick reaction force arrived at the scene and they and Gutierrez planned to fight their way to reach Miller.

As they started shooting at two targets, they saw two insurgents come out of what looked like a shelter.

Gutierrez went to reload when he heard someone begin to yell, "RPG!"

"When I looked up, the RPG landed about five-and-a-half feet from us," he said. "The explosion alone just like knocked me back about five to seven feet.

"I checked myself, and I was like, OK, am I dead?" Gutierrez said as he laughed.

Gutierrez&#8217; body armor and GPS had taken most of the shrapnel from the blast, but two Special Forces soldiers were wounded by the blast.

He went over to them and started first aid. He called in an airstrike from where the RPG was fired, and then the new team commander said it was time to get Miller.

By that time, the A-10s were running low on gas, but Gutierrez asked they stay a little longer &#8212; the noise they made alone scared the enemy.

After another airstrike, Gutierrez and others raced to Miller&#8217;s body, formed a circle around him, grabbed him and dragged him to the casualty collection point.

Gutierrez then directed two AH-64 Apache helicopters to attack insurgents threatening the team&#8217;s withdrawal as Miller&#8217;s body and the wounded were evacuated.

The team made their way back across the bridge under cover of artillery from a nearby firebase.

Gutierrez was later awarded the Bronze Star with "V" device for calling in more than 20 airstrikes that fended off more than 100 enemy fighters, killing more than 40 and allowing 17 friendly casualties to be evacuated, according to information provided by Air Force Special Operations Command.

The massive role airpower played in keeping the U.S. and Afghan troops alive was demonstrated as they finally withdrew, when they heard enemy fighters over the radio asking for permission to attack them.