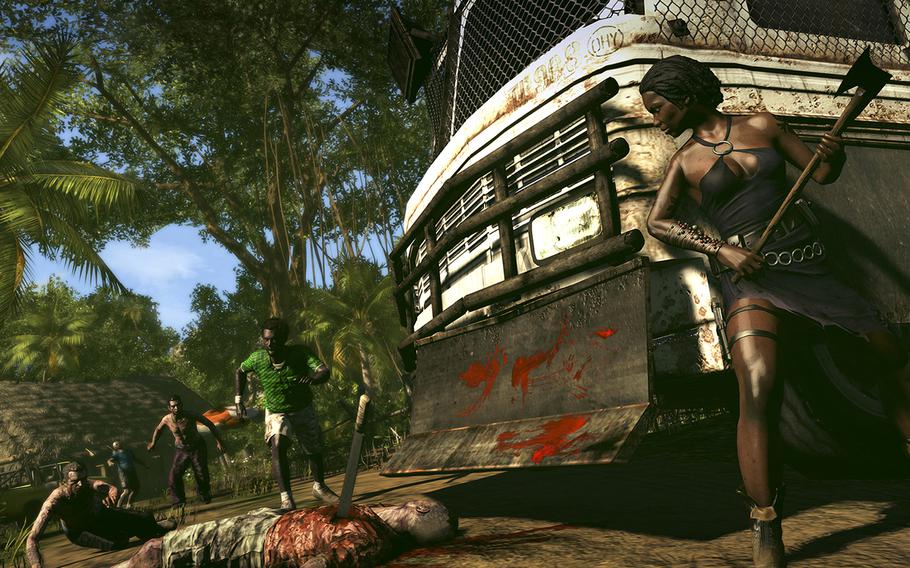 Every zombie game has a niche.

“Left 4 Dead” was all about co-op. The original “Walking Dead” was about interacting with your companions and making decisions with impact. And “Dead Island” was about running around in a wide-open world and whacking zombies with anything you can grab.

“Dead Island: Riptide” follows in its predecessor’s path — perhaps a little too closely. The gameplay, storyline and graphics closely match those in the original, which won’t please those who are looking for some growth. However, there are enough tweaks and additions to make true fans appreciate the shooter/slasher/smasher from Deep Silver.

The game starts where the original left off, with the four playable survivors rescued from the zombie-plagued island of Banoi. However, their escape is only temporary because they end up on a zombie-infested ship, which beaches on another zombie-infested island.

You can play as one of the four original characters — blade-wielding Xian, gun-toting Purna, knife-flinging Logan or bat-swinging Sam B — or as their new companion, military veteran John Morgan, who’s good with his fists. The multiple characters allow friends to drop in to play cooperatively.

Each of the characters is immune to the zombie virus, so you can mix it up with the undead without fear of joining their ranks. However, you aren’t immune to death. Fortunately, the only penalty for that is a few seconds on the sidelines and a reduction in your in-game bank account.

Fighting is pretty similar to the original game. You pick up various implements to bludgeon, slash or shoot the undead. You also can add special features to most weapons — for example, creating an awesome electrified samurai sword.

Although combat is similar, a couple of small tweaks improve the experience. Blades and blunt weapons degrade as you use them, but not nearly as quickly as they did in the original game. In addition, firearms are much more effective this time around. You can usually take out the average zombie with a pair of well-placed shots, instead of taking six or seven.

Like Banoi in the original game, the island of Palanai is a wide-open world with plenty of places to explore. The main storyline takes you through most of its locations, and side quests offered by other survivors introduce you to most of the rest. You can get around on foot, but that just opens you up to attacks by the undead. It’s much more fun to drive around — and drive over zombies. And in the new game, you also have the option of motoring around the rivers and lagoons on a boat — which also is good at splattering zombies.

The game offers two other interesting additions: sieges and battle arenas. At several points, you and your friends must defend a base from a zombie onslaught. You can prepare your base with electrified wire, mines and machine guns, but the zombies are fast and furious so it’s always a wild fight. The map also includes a number of battle arenas known as “Dead Zones,” where you can fight your way through a collection of run-of-the-mill undead before tackling a super-size foe. Both of these features are very fun.

Your foes range from often-lethargic “walkers,” to misshapen “wrestlers” and disorienting “screamers.” The artificial intelligence is mixed. Some enemies will rush you or hurl deadly objects, making the fight exciting. However, many others will just stand around letting you take potshots at them from a distance. And “Wrestlers” can’t make it though most doorways so you can sit on the other side and blast away until they fall.

The game is also plagued by a few glitches, such as weapons dropping from your inventory when you’re at a workbench, visual hiccups and quite a few stutters and stalls.

Graphics weren’t exactly a strong point in the original “Dead Island,” and they haven’t improved. The characters, settings and animations harken back to the early days of this generation of consoles.

However, the worst problem for me was the opening mission, which is set on the ship that rescued the original survivors. Developers thought it would be cool to make the setting sway with the waves. This actually made me seasick. It took a couple of hours and a couple of doses of Pepto-Bismol to recover.

The game earns its M rating with graphic gore.

“Riptide” is priced at $50, which is $10 less than the average console game. It seems like an acknowledgment that the game is more like an add-on to the original than a true sequel. However, true fans will be happy to visit Palanai.

Bottom line: Sure, the action might seem familiar and small glitches might leave you rolling your eyes, but there’s still some fun to be found.