Review: South Park takes on superhero setting in 'The Fractured But Whole' 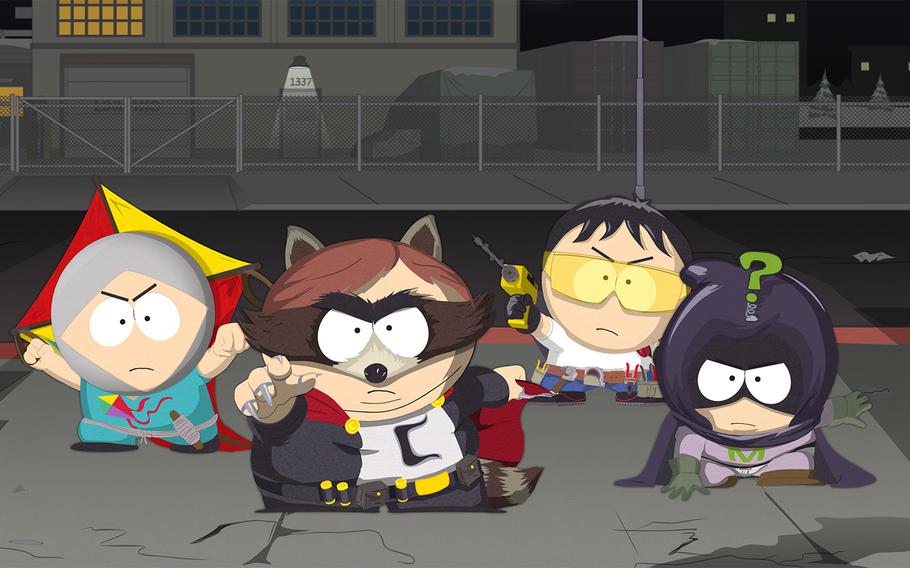 In "South Park: The Fractured But Whole," Cartman and the boys put on capes and cowls and dispense justice throughout their town. (Ubisoft, South Park Digital Studios)

In "South Park: The Fractured But Whole," Cartman and the boys put on capes and cowls and dispense justice throughout their town. (Ubisoft, South Park Digital Studios) 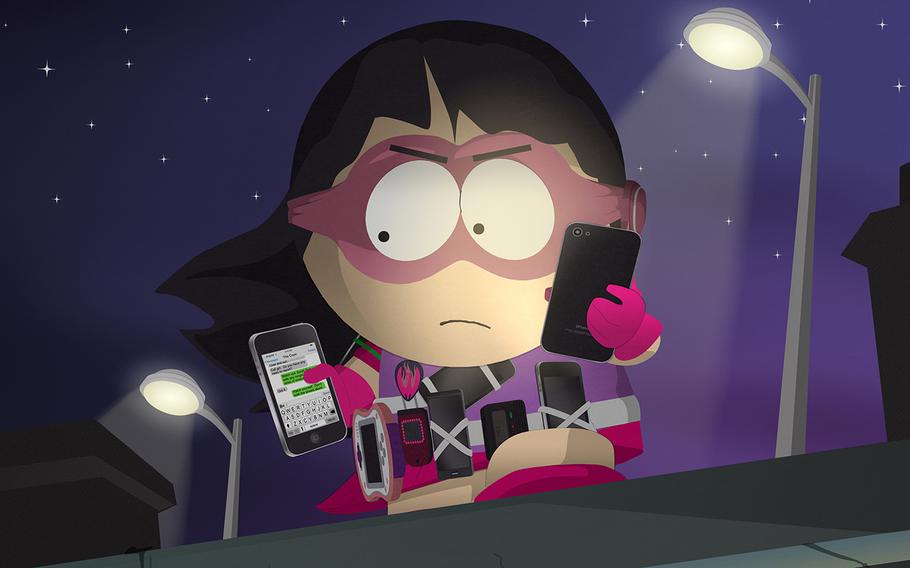 The boys are joined for the first time by a girl, Wendy, whose alter-ego is “Call Girl," in "South Park: The Fractured But Whole." (Ubisoft, South Park Digital Studios) 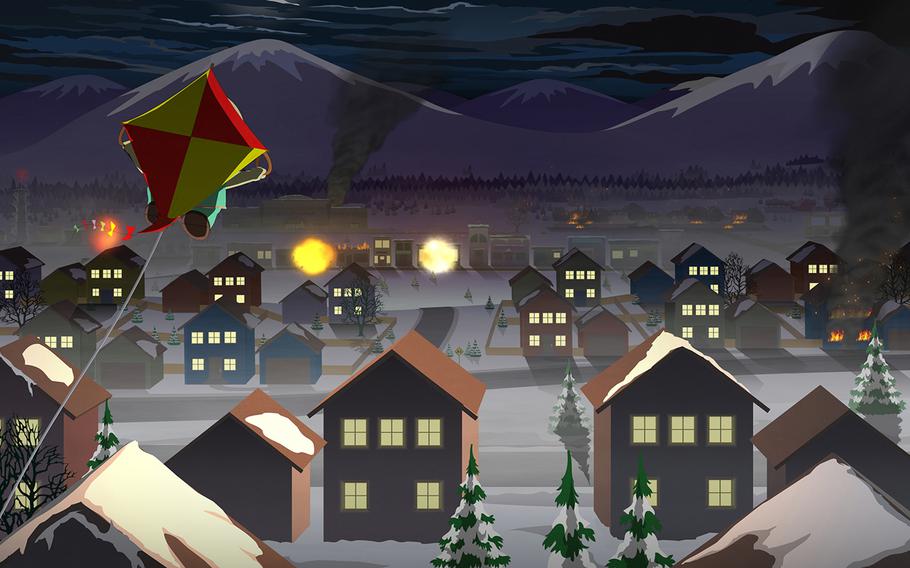 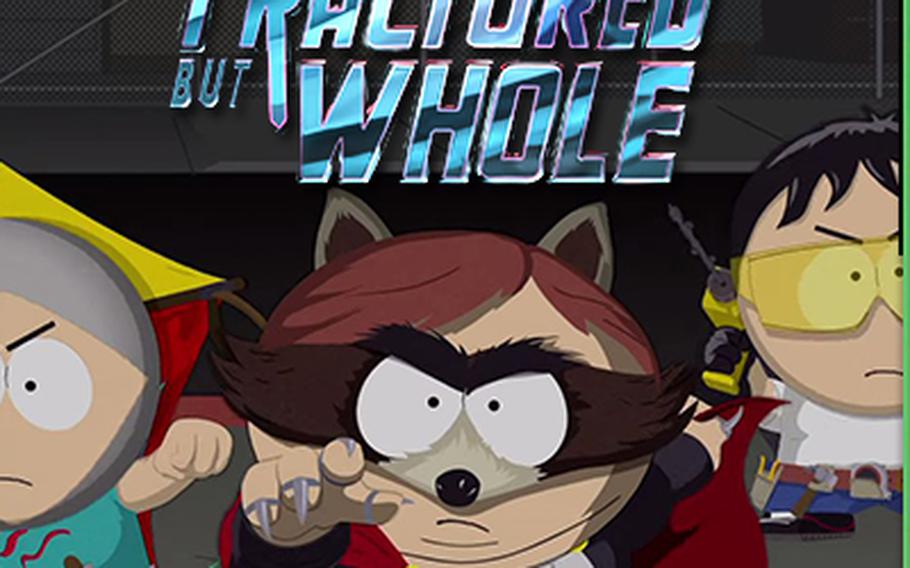 For more than 20 years now, “South Park” has delighted fans, annoyed its detractors and – at times – outraged both in equal measure.

No matter your background, religious beliefs, political leaning, nationality or gender, chances are showrunners Matt Stone and Trey Parker have written a joke that pokes fun at you. But the show persists because, at its best, it is a clever deconstruction of adult life, blended wonderfully with evocations of childhood that most of us can relate to.

That same combination of clever writing and childlike wonder made “South Park: The Stick of Truth” not only a fantastic South Park game, but an enjoyable experience for nonfans. While it certainly helped to be a fan of the series’ trademark gross-out humor, fans of roleplaying games found plenty to sink their teeth into.

From the simple-but-fun turn-based combat, to the exploration elements, to the cheeky takedown of fantasy tropes, “The Stick of Truth” held up as a fantastic game.

However, toward the end of the game, it was clear the jokes were being stretched a little thin and some unnecessary padding was added, likely to lengthen the play time. At the end of “The Stick of Truth,” I wondered – what more could a new South Park game add to justify its existence?

Turns out, quite a bit.

The recently released follow-up, “The Fractured But Whole,” deviates from the original game in small ways, but keeps most of what worked there intact.

Gone is the swords-and-sorcery themes, replaced with a superhero setting, ripped straight from the 13th and 14th seasons of the show. The switch is handled brilliantly and sets the tone for the rest of the game.

“Fractured” opens with the boys still playing in their fantasy world, until Cartman gets bored and decides he wants to play superheroes instead. Without preamble, the boys drop their swords, declare it lame to play as elves and dress up in their finest capes and cowls and begin dispensing justice throughout South Park.

It’s a cute moment from South Park Digital Studios that reminds us that we’re playing a very adult game that’s presented through the eyes of easily distracted fourth-graders.

Those little touches are found throughout “Fractured.” The boys’ (joined for the first time by a girl, Wendy, whose alter-ego is “Call Girl”) greatest foes are sixth-graders. One memorable boss battle is against an angry parent who has the power to ground. And battles are randomly interrupted when cars pass through the street, forcing the factions to pause before rejoining the battle.

These moments are great, both because they’re funny and because they break up what would otherwise be a never-ending parade of dirty jokes.

The game plays out much the same way “Stick of Truth” did. South Park is a fully explorable town, filled with kooky characters that provide uniquely South Park-themed missions and side quests.

As the new kid, affectionately called “Buttlord,” you’re swept up in Cartman’s plan to rescue a cat, make his superhero franchise the most popular and, eventually, stop Christmas from happening every day.

“Fractured” is still very much a turn-based RPG. This time, the simple side battles are replaced with a more tactical grid system. You’ll still take turns taking actions, but this time attacks will have specific ranges and areas of effect. You’ll have to plan out each attack, jockey for position and lean on abilities that push and pull enemies.

Those abilities will depend heavily on the classes you choose. Initially, you’re allowed to pick from one of three classes, each with its own attack abilities and ranges. At the beginning, you’re given three class-dependent regular abilities and one super ability. As you progress, you’ll be allowed to mix abilities from different classes, providing plenty of room for customization.

It’s a great way to handle the classes, but I wish we had been given the reins to all the abilities much sooner. By time the game unlocks all the abilities, you’re down to just a handful of meaningful battles.

Companions are handled much in the same way. As you progress though the story, you’ll unlock different buddies, all with different combat abilities and some of whom have skills that can be used to better explore South Park. You can switch companions at any time before combat, which makes playing around with different configurations a breeze. There are even special items that can call in help from nonplayable characters, each with devastating attacks of their own.

Costumes are another area where the developers allow players to tweak things to their liking. Headgear, body and arm pieces can be switched around at will and are a common form of loot, allowing for tons of customization options. You’re only able to change how the main character looks, which was a bit of a letdown for me, but the sheer number of configurations more than make up for that.

Costume and combat items can be crafted, usually with elements found while exploring. It’s a perfunctory system that doesn’t really leave much of an impression, but doesn’t get in the way of the gameplay either.

My experience with the game was mostly positive, though a couple of negative points should be mentioned. First off, I experienced three total game crashes. I didn’t lose any progress, thanks to a generous auto-save system, but I’d recommend saving every so often regardless.

Secondly, I finished the game at around 15 hours. For the most part, it flowed naturally and felt like a cohesive story. The final few hours of the game, however, felt disjointed and separate from the rest of the game. Once again, I felt as if there was content needlessly stapled to the game to pad its length. The final few hours were more of a drag and the ending, while keeping with South Park traditions, was too abrupt for such a lengthy experience.

Finally, and I’m just saying this as to be utterly clear: No matter who you are or what you stand for, there is likely something in “Fractured” that will rankle or offend. There were jokes in here that I found funny, some I didn’t. That’s to be expected with 15 hours’ worth of nonstop jocularity. It is a game that is primarily focused on making you laugh. Humor is subjective, so if you find South Park’s brand of humor to be offensive, you’re going to have a bad time.

For fans of the series, this is a no-brainer. It looks, feels and sounds exactly like “South Park.” It has improved on nearly every gameplay mechanic from “Stick” and offers plenty of content for the asking price. I had a great time with my second visit to South Park and once again I’m left scratching my head for what they could possibly do with a third entry, considering how much they packed into “Fractured.”

Much like the show, I’m sure I’ll be shocked and amused when they manage to pull it off again, like they did here.