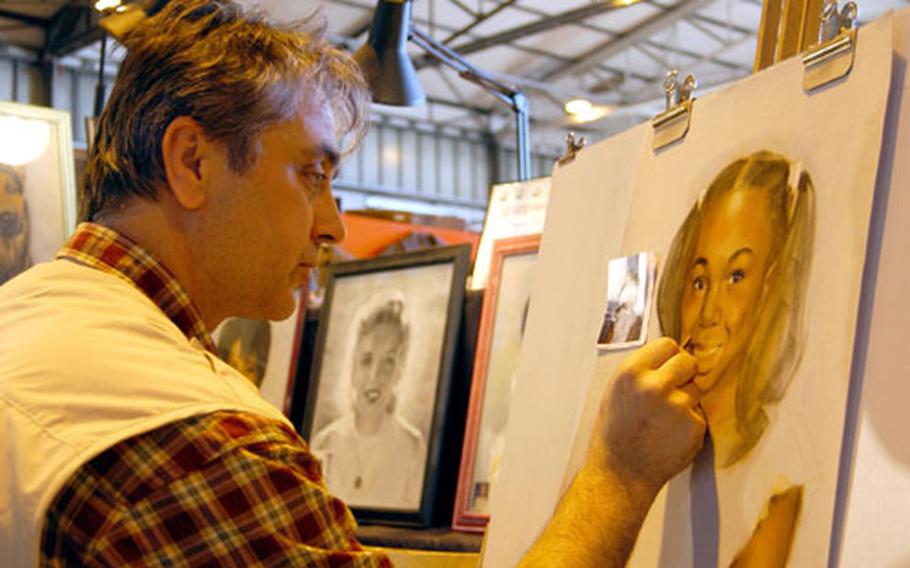 Sascha Kijanovich, an artist originally from Belgrade, Serbia-Montenegro, has been creating portraits at bazaars for 12 years. (Lisa Horn / S&S)

RAMSTEIN AIR BASE, Germany &#8212; Each year, the 86th Services Ramstein Welfare Bazaar brings the world to the shopping bags of eager buyers and thousands of dollars to the Kaiserslautern military community.

And it keeps getting bigger.

&#8220;The entire world is represented through the different products that the [vendors] sell,&#8221; said Lynn Moore, secretary of the bazaar&#8217;s command post and a member of the Ramstein Officers&#8217; Spouses Club, which produces the event.

The first Ramstein bazaar, which took place 40 years ago, had 10 volunteers and 63 vendors. This year, more than 160 vendors, some hailing from as far away as Australia and as close as Stuttgart, Germany, set up shop last month in two hangars and a tent along Ramstein&#8217;s flight line.

Not only do shoppers benefit from having the world at their feet, but the community also reaps rewards. For example, the 2002 Ramstein bazaar netted $299,179.83 in profits. That money went to scholarships; the Fisher House, which provides accommodations to families of servicemembers and civilians being treated at Landstuhl Regional Medical Center; schools; and Scout groups, among other groups and causes.

Servicemembers, civilians and their families who know of the treasures to be found, return to the bazaar year after year.

&#8220;I come back just because there are crafts from all over Europe and it&#8217;s a good place to get them all centralized,&#8221; said Ann Kash, whose husband is stationed at Ramstein.

&#8220;The Christmas market, to me, is more a cultural event than a shopping event. This [holiday bazaar] is a shopping extravaganza.&#8221;

The &#8220;extravaganza&#8221; is not women&#8217;s territory anymore, either. There are more male shoppers in the ranks, many of whom are servicemembers eager to send gifts home. First Lt. Clay Nichols, stationed at Ramstein, said he has lots of shopping to catch up on.