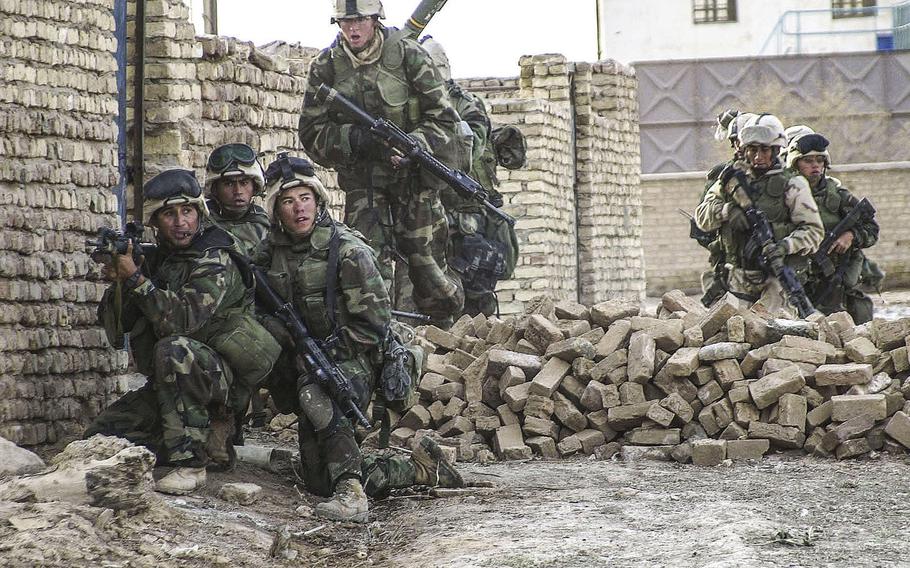 Marines from Golf Company, 2nd Battalion, 23rd Marines stack along a wall to provide cover fire during a raid on a local Ba'ath Party headquaters building in Al Fahr, Iraq, in March, 2003. The raid turned up a cache of weapons, intelligence documents and several Ba'ath Party leaders taken prisoner. (Mark Oliva/Stars and Stripes)

Beads of sweat appeared on the bald head of Marine Staff Sgt. Patrick Llamas as he stood beneath the searing Iraqi sun alongside a thin desert highway.

His flak jacket weighed on him, heavy with bulletproof plates. Over that, he wore a vest laden with grenades, knives and radios. He listened closely to the commanding officer explain the plan for the upcoming mission.

It was March 29 and Company G, 2nd Battalion, 23rd Marines was about to conduct a raid. Local Iraqis had told the Marines that Baath Party officials were storing weapons in a headquarters building in the nearby southern Iraq town of Al Fahr.

The company of nearly 200 Marines was to enter the town, find the headquarters and an adjacent school and seize the weapons.

The raid was to be in and out — grab the guns, documents and the bad guys, and get out of town.

But there were inherent problems. Intelligence was sketchy. Descriptions of the building lacked details. There were no maps of streets in the village, made up mostly of one- and two-story brick and mortar buildings. And the civilian population was milling about in the streets.

Also, would the Baath Party members make a stand and fight to the death?

Some of their worst fears were realized immediately upon rolling into the town. Local civilians poured into the streets to watch the commotion.

Jowa! Jowa!” the Marines shouted — Arabic for “go inside.” Still, the Iraqis stood and watched. Time was running short. Only about an hour or so of daylight remained when the Marines jumped from the trucks and took cover behind brick walls near their first target.

Staff Sgt. Jose Gutierrez herded his 3rd Platoon forward. Its job was to spearhead the raid, gain the foothold on the town school and provide cover fire for Llamas’ 1st Platoon, charged with hitting the party headquarters.

The Marines shielded themselves as a team of rocket gunners fired into the suspected building. The explosion rang out and the platoon sprinted across an open field before the dust settled. The shot was off the mark, but good enough to provide cover for them to enter the building.

Once inside, the Marines learned just how faulty their intelligence was. Two women and three children huddled inside crying — unhurt, but shaken. This was not the school.

“We had difficulty detecting which building was the schoolhouse,” Gutierrez said. “We were told to take down the school, which was supposed to be a white building, but outside of that, we didn’t have too much knowledge.”

With the assistance of a local villager, the Marines were turned in the right direction. To reach the school, they would have to navigate through a maze of narrow alleys and across an open field. Topping it off, the element of surprise disappeared in the flash of the rocket explosion.

They hunkered down in an alley and worked out a new plan.

“The first thing that came to mind in that alley was ‘ambush,’” Gutierrez recalled later. “It’s one of those situations where you’re taught not to get into it, but we had no other way. We had to get to the schoolhouse and we were doing it by foot. That meant we had to go through the alleys.”

The Marines moved out toward the school, skirting the head-high wall along it. Finding no gate, they hopped over the wall and burst inside the building.

The first squad cleared the first floor. The second hurried up the stairs, checking each room on the second floor, but found little more than portraits of a young Saddam Hussein hanging in each classroom and rows of dusty benches.

A few kicks opened a locked door, revealing walls covered with hand-drawn pictures, rendered, most likely, by children. One showed a helicopter hovering over a burning city as a tank, led by a leash from President George W. Bush’s hand, destroyed the village. Another showed a mosque pushed upward by a hand, tearing through the flags of Israel, the United States and the United Kingdom.

“When I first looked at the school, it looked abandoned,” Gutierrez said. “It didn’t look like classes were taught there. There was nothing written on the chalkboard and no books or learning materials around.”

The drawings were the only evidence the building was being used.

“It looked like this was a place where there was a lot of brainwashing going on,” he said.

The Marines on the first floor shouted for Gutierrez. They had found an AK-47 and a magazine pouch with four magazines under a bed in what had been someone’s makeshift home.

While 3rd Platoon finished its search, radios crackled. Staff Sgt. Charles Spence, weapons platoon sergeant, noticed that some of the civilians watching the event were wearing black boots — a sign, the locals had said, of possible Baath Party irregulars.

“They sort of shrugged their shoulders like they didn’t understand when I questioned them,” Spence said.

“I closed my Marines around them and we found some discarded uniforms and torn photos behind them.”

Spence separated the elderly, women and children and began searching the remaining Iraqis. Night was falling and Marines were beginning to work by night vision goggles when the rumble of a diesel truck caught Spence’s attention.

“I motioned for the driver to get out of the cab,” Spence explained. “And it was like Ringling Brothers. First one person, then another. Finally, eight people came out of the cab of that semi.”

All exited with their hands up. Marines searched the truck and uncovered large amounts of Iraqi money. One of the Iraqis wore a uniform under his robes. Another four wore black boots and the final three had on new tennis shoes in a town where raw sewage ran in the streets and most villagers walked barefoot.

Meanwhile, local villagers pointed out the home of a Baath Party official, and warned he might have machine guns.

Sgt. Joaquin Gurrola’s squad from 2nd Platoon lined up for the assault on the official’s home.

“I thought we had two courses of action,” he recalled. “We could ask them to come out on their own, or we could make a forced entry.”

The first option worked. Two men, five women and three small boys came out of the home, cooperating with the Marines. The Marines searched the house, finding only one knife, a magazine for an AK-47 and documents that were later turned over to intelligence.

“They were very cooperative,” Gurrola said. “We communicated mostly through physical gestures, but it was exhausting because we went in there basically blind.”

As Gurrola was wrapping up his search of the official’s house, Llamas staged his platoon for the assault on the Baath Party headquarters, about five blocks away.

The building was different from others in the village. Instead of brick and mortar, it was built of reinforced concrete. Arabic writing adorned the outside walls and a large mural of Saddam Hussein loomed near the entrance.

“The Marines on my flanks said they could see five bodies moving around inside the building when we staged for the entry,” Llamas said. “They reported they could see them burning documents.”

Llamas knew he couldn’t lose another moment. Two rocket gunners crept up to a berm, took aim and destroyed the entrance to the building. Marines poured through the smoke and debris.

They quickly extinguished the fire and recovered the documents as rifle fire rang out. Marines were breaking through doors and smashing windows.

“There were a couple of doors locked and we could see AK-47s and AK-74s lined up, like they had just pulled them out,” Llamas said. “We found a hammer and busted the lock on the doors and what was in there looked like an armory.”

Crates of rocket-propelled grenades and ammunition were behind the door. A cache of weapons was stashed in wall racks, each rifle with a magazine inserted. Desks and cabinets were filled with documents, some in German bearing the yellow-and-black nuclear symbol. Stacks of crisp Iraqi dinars were banded together. In a back room was a sand table, similar to those the U.S. military uses to plan assaults.

More shocking, though, were more drawings similar to those found in the school, only these bore signs of a military education.

“It looked like it served as some type of reformation school for children,” Llamas said. “You could see they were teaching them the way of the Baath Party. There were drawings clearly done by children that showed how to set up a mortar pit and machine gun positions. It was amazing.”

Llamas ordered his Marines to cart all the recovered documents and gear into one area, and radioed his commander with news of the find.

“I don’t think they understood the magnitude of what we came across,” he said.

“At first, they told me to take what I could carry and get out. I told them it was more than a platoon could carry. They said they would send another platoon, but it was too much for two. I told them it may take two tracks [amphibious assault vehicles].”

Night blanketed the town as Llamas’ Marines loaded what they could into the back of a Humvee, filling it from the floor to the plastic tarp roof, before setting off to return to their trucks. The mission had taken about four hours.

In all, the company took 19 detainees, three of whom turned out to be Baath officials, and confiscated two long-range bolt-action rifles, 20 AK-47 and AK-74 rifles, one mortar tube, two machine guns, 10 crates of grenades, five crates of ammunition and stacks of documents.

“It felt good to get the raid off and come away with so much,” Llamas said.

“It validated what we’re trying to do here. The ones who have children really understand. The children here aren’t given the opportunity to be children. They’re taught to fight from day one.”