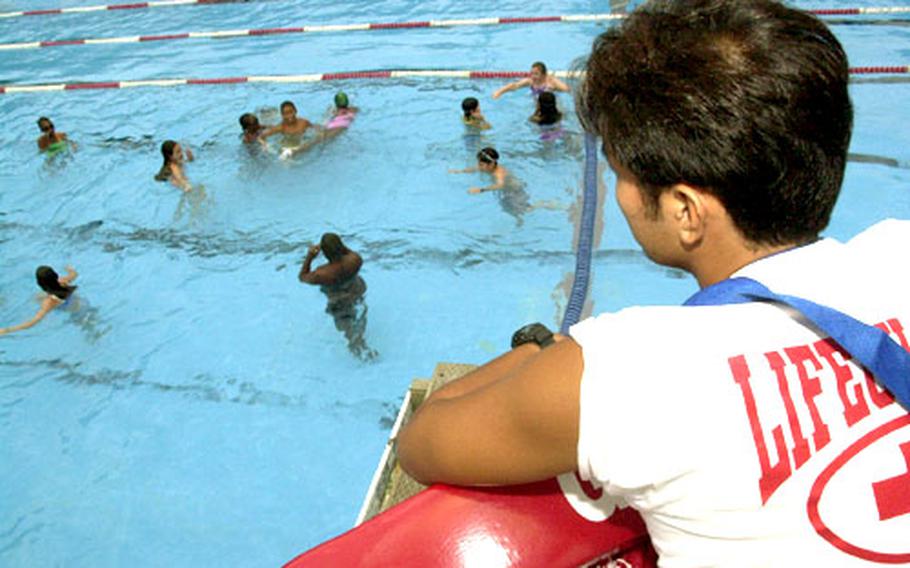 Buy Photo
People who work outdoors, including lifeguard Kanazuka Takeshi at the Yokosuka Naval Base pool, need to be vigilant in applying SPF 30 sunscreen to avoid skin damage that could lead to skin cancer. The children might have entered the pool wearing sunscreen, but they’ll need to reapply after toweling off. (Jim Schulz / Stars and Stripes)

SASEBO NAVAL BASE, Japan &#8212; The summer&#8217;s most intense days of the sun&#8217;s harmful ultraviolet rays are about to dominate Pacific weather forecasts.

Despite the broiling days ahead, some folks will remain outdoors for long hours at pools, golf courses, hiking trails and fishing holes; they should heed the advice of healthcare professionals.

Simply being outside on sunny days can contribute to skin cancer.

The three most common forms of skin cancer &#8212; basal cell, squamous cell and melanoma &#8212; are on the rise among Americans, according to the American Academy of Dermatology.

Melanoma is the deadliest form; one out of every 71 people will contract it. Twenty years ago, it was one in 150 people.

Fortunately, there are effective ways to diminish the sun&#8217;s unhealthy effects.

Most skin cancer, which is more prevalent among fair- skinned people, can be effectively treated, said Cmdr. Elise Gordon, officer in charge of the Sasebo&#8217;s clinic&#8217;s family practice department.

It is estimated that 1 million new cases will be diagnosed with basal cell carcinoma among Americans in 2003, the news reports stated.

Gordon said the basal cell variety frequently occurs on sun-exposed skin of the face, neck and upper body. Most often it appears as an enlarging bump that bleeds easily if rubbed.

&#8220;We get our fair share of those. Every couple of weeks we have someone in here having something removed,&#8221; she said.

Squamous cell carcinoma, she said, is usually scaly or tender red bumps on sun-exposed skin. This type, depending on how deep the tumor is, can be invasive.

Melanoma is the most serious form of sun-related skin cancer, Gordon said, because it is invasive, and can spread to other organs in the body. If treated early, thin melanomas are curable with simple surgery. If the diagnosis is delayed, melanomas can rapidly spread.

A brown or black spot on the skin characterizes melanoma that changes in size, shape or color over weeks to months, she added.

Even sunburns endured as a youth are risk factors for melanoma, Gordon said.

Pesqueira explains: &#8220;If you&#8217;ve had any rubbing or sweating at a sports activity, or you&#8217;ve been at the beach and swimming and you towel dried, don&#8217;t forget that the sunscreen is coming off, and you need to reapply. You really should reapply every couple of hours.&#8221;